Accessibility links
5 Problems For House Intelligence Chairman Devin Nunes And The Trump White House Democrats are calling for Nunes to recuse himself from the Russia investigation after it was revealed he was on White House grounds the day before announcing evidence of Trump's team being surveilled. 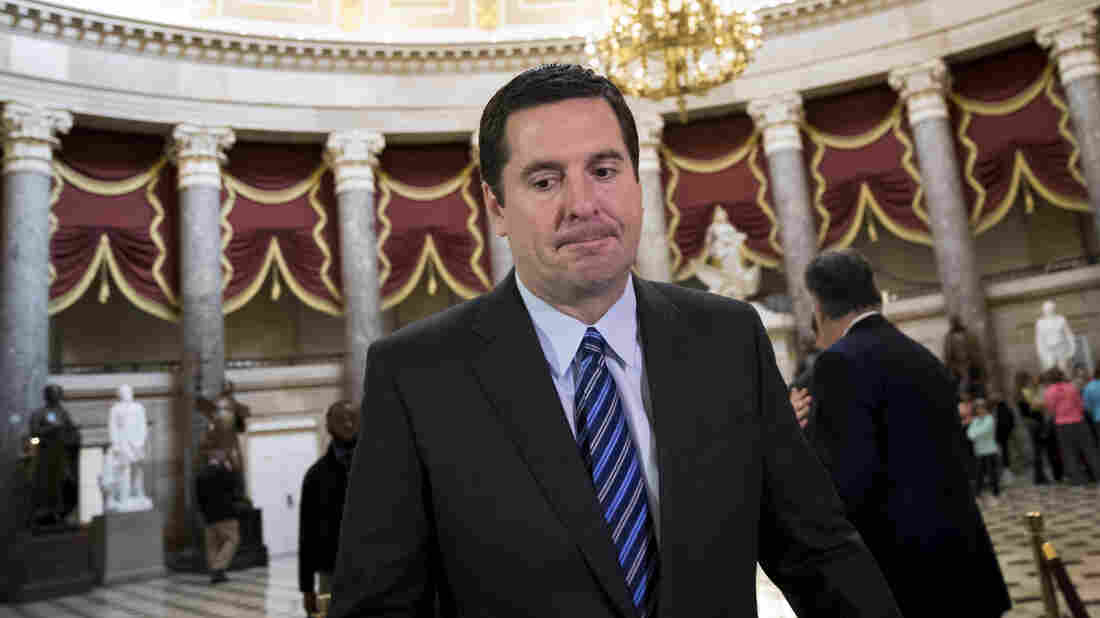 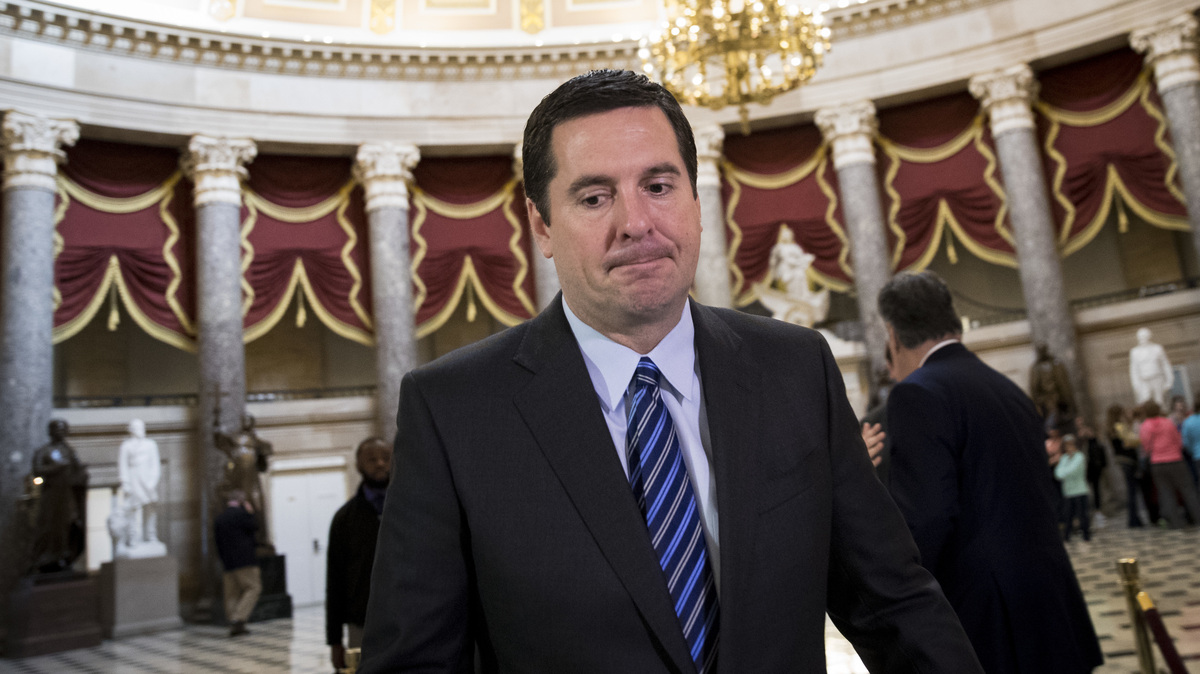 House Intelligence Committee chairman Rep. Devin Nunes, R-Calif., finds himself the center of attention after playing something of a dual role — Trump supporter and independent investigator.

Calls are growing for the Republican chairman of a key intelligence panel to recuse himself.

"There is such a cloud over the chairman's leadership," Adam Schiff of California, the ranking Democrat on the House Intelligence Committee, told NPR's Steve Inskeep on Morning Edition.

Schiff was referring to Chairman Devin Nunes, who revealed Monday that he had met with an intelligence official on the White House grounds a day before announcing that there was evidence he had seen to indicate the Trump campaign and transition were scooped up in incidental surveillance.

Rep. Adam Schiff: Nunes Should Step Away From Russia Investigation

Rep. Adam Schiff: Nunes Should Step Away From Russia Investigation

"At least for the Russia investigation or issues involving the transition team," Schiff said, "it would benefit the public if on those two areas, he recuse himself."

On Tuesday, asked by reporters if he would continue leading the investigation, Nunes said, "Why would I not?" He referred questions back to Democrats for why they were asking him to step aside. "We're doing a very thorough job on this investigation," he added. "Everything is moving forward as is."

Schiff also called for a supplemental independent investigation to go forward. The revelations threaten to undercut the House's investigation on a committee that has been run in one of the most bipartisan fashions of any on Capitol Hill. Now, the Senate's investigation is likely to take center stage with the House investigation marred and bad feelings left behind.

Here are five problems for Nunes and the White House:

1. Timing: It's not just the fact that Nunes went to the White House grounds the day before making his announcement (where he says he met with an intelligence official not a member of the White House staff); it's also that his meeting came the day after FBI Director James Comey debunked President Trump's claim that former President Obama wiretapped him. Nunes also then told President Trump about the information he'd seen. Trump said he felt vindicated, though the information clearly did not vindicate his accusation that Obama wiretapped him. White House press secretary Sean Spicer called it a "startling revelation."

2. Breaking protocol and trust: Nunes did all this without telling anyone on the intelligence committee, a committee that has traditionally been one of the most bipartisan in Congress. Now, the committee appears hobbled. Democrat Jim Himes of Connecticut told MSNBC's Morning Joe that Nunes has scrapped all meetings and open hearings that were scheduled for this week. "The committee has been put into suspended animation," Himes said.

3. Optics: That, combined with the fact that Nunes himself was part of the Trump transition, all makes it look like Nunes was attempting to help the president. What's more, The Washington Post led its story detailing how Nunes made his way to the White House this way:

"After taking a brief phone call, Rep. Devin Nunes (R-Calif.) swapped cars and slipped away from his staff, congressional officials said. He appears to have used that unaccounted-for stretch of time to review classified intelligence files brought to his attention by sources he has said he will not name."

Swapped cars and slipped away from staff has all the cloak and dagger of a spy novel. For his part, Nunes has said the trip was not at night but during the day, and he wasn't trying to hide. "There was no sneaking around," Nunes told Fox News on Monday night. He said it was not unusual and that "we go to the executive branch at least one or twice a week."

Still, for Schiff, it's all a problem. "Everything is wrong with the fact that he went to the White House to obtain material that he didn't share with his own committee," Schiff told Morning Edition, "but then went back to the White House, reportedly to disclose to the White House. You know, it just doesn't add up."

Nunes doesn't see it that way. "I'm sure the Democrats do want me to quit," Nunes contended on Fox, "because they know that I'm quite effective at getting to the bottom of things."

The bottom line, though, is that it's difficult to lead an investigation when your impartiality is called into question.

4. Who signed him in? That brings us to a couple of problems for the Trump White House. The first is a question Spicer didn't answer at Monday's briefing: Who signed Nunes onto the White House grounds?

"I'll be glad to check on that," Spicer said. "I'm not sure that that's how that works. But I will follow up on that point."

Democrats will continue to beat the drum on that point, too. Here was Schiff on Morning Edition: "Someone on the White House staff would have had to have let him onto the grounds; it's not something he could wander onto."

And Himes on Morning Joe: we "don't know who Nunes was signed in by at the White House."

5. Double standard: But beyond Nunes and the House investigation, the episode has revealed something else about this White House. It seems to care about leaks when the information hurts it, but doesn't think they're relevant when they help. The president and White House decried anonymous leaks in the early days of Trump's presidency.

But on Monday when Spicer was asked whether this was an "inappropriate leak," Spicer replied: "No, we're not concerned about that."

There is a degree of irony to that when the White House was found to have asked Nunes and Senate Intelligence Committee Chairman Richard Burr last month to counter negative stories about Russia ties. Both acted on that.

Nunes' response then to whether he had compromised his role as an investigator if he was going to do White House messenger?

"How is that compromised if I'm trying to be transparent with the press?" he contended. "The White House has been very critical of a lot of you, so here you have the White House actually trying to communicate ... and now suddenly that's wrong? There's nothing wrong with that. ... What we're trying to do is have a very good working relationship with the executive branch."