Accessibility links
What Trump Misses About Energy Jobs In America The president on Tuesday signed an executive order with the intention of helping bring back coal jobs. But clean energy jobs, like solar, have taken off, far outpacing coal. 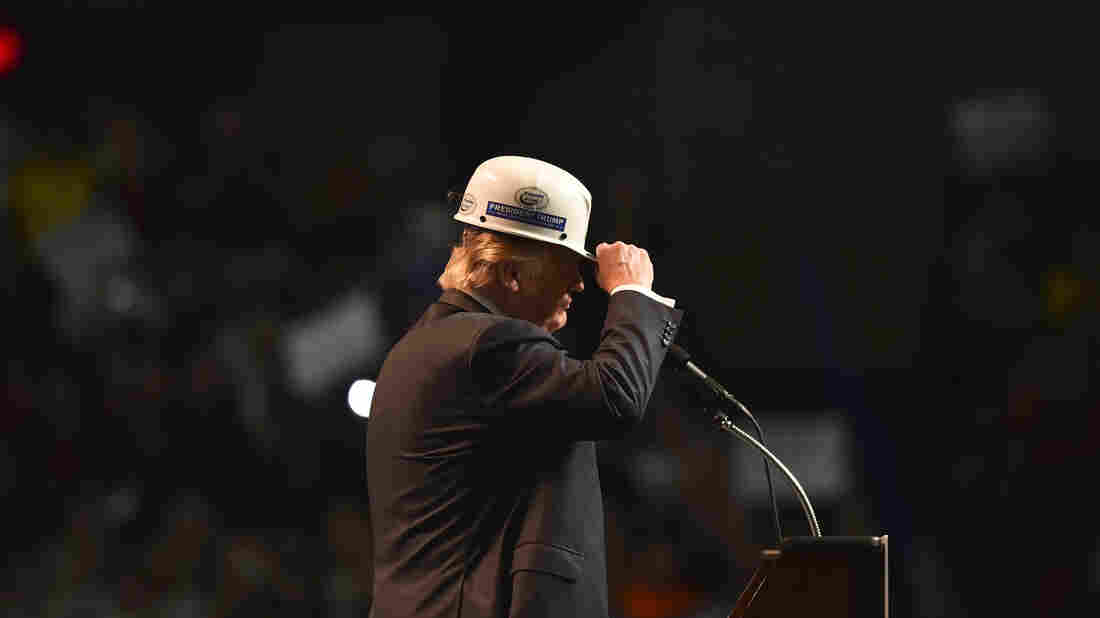 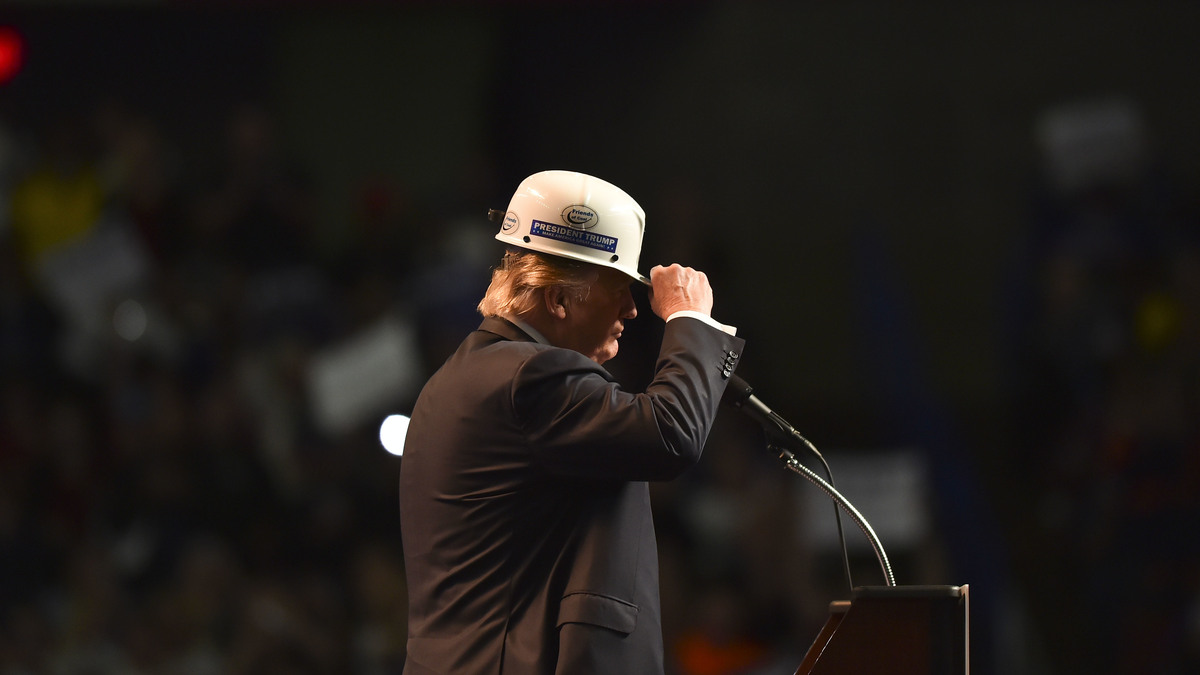 Donald Trump wears a coal miner's protective hat while addressing supporters at a rally in Charleston, W.V., last May.

In 2008, candidate Barack Obama ran an ad with this opening line: "The hands that built this nation can build a new economy. The hands that harvest crops can also harvest the wind."

And then it showed men working on roofs: "The hands that install roofs can also install solar panels."

The ad was directed at a group Obama was acutely aware he had to win over — white, working-class men. A quarter of those same men deserted Democrats in 2016, according to a New York Times analysis, and voted either for Donald Trump or a third-party candidate.

On Tuesday, President Trump is trying to start making good on his promises to many of those same white men — coal workers. The Trump administration is doing an about-face on President Obama's climate and environmental policies. The president signed an executive order with a goal of taking restraints off businesses and boosting the coal industry.

"He made a pledge to the coal industry, and he's going to do whatever he can to help those workers," a senior administrative official said Monday ahead of the executive order's signing. 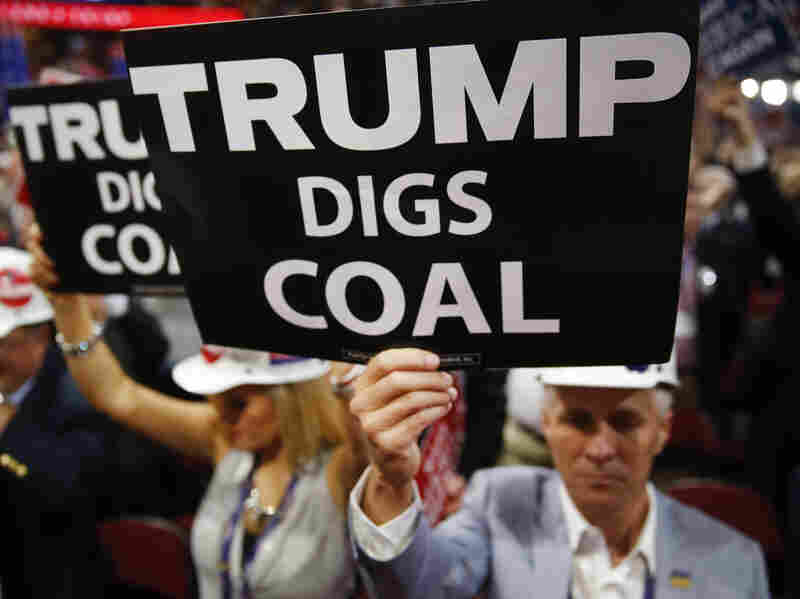 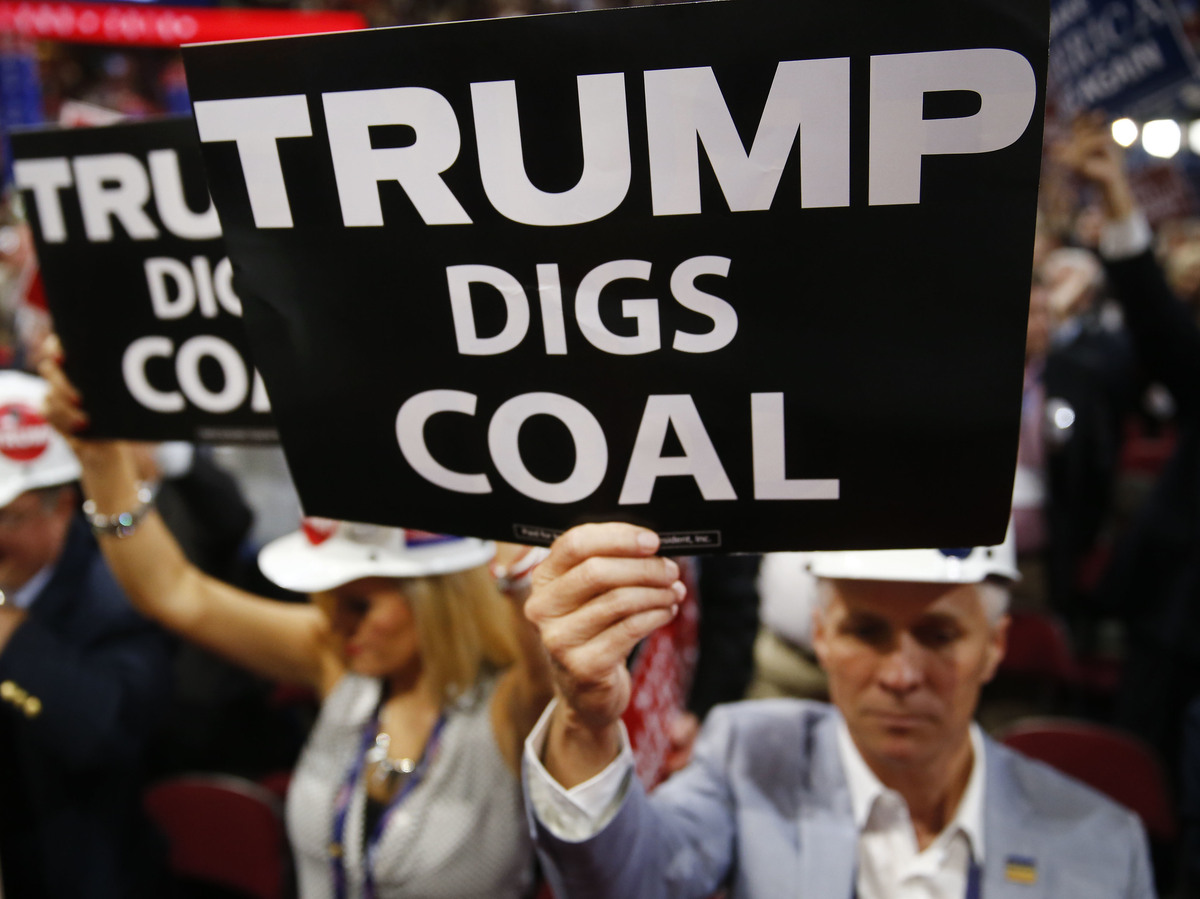 A delegate holds a sign reading "Trump Digs Coal" during the Republican National Convention in Cleveland in 2016.

Surrounded by about a dozen coal miners, he said, per NPR's Jennifer Ludden, "You're going back to work." He pledged to "end the war on coal and have clean coal, really clean coal."

But there are problems with both Trump's nostalgic Make America Great Again coal promises and Obama's radical vision for a reshaped economy.

Trump's ignores the reality of a changing energy industry. Solar jobs, for example, have taken off over the past decade. The Obama administration tried hard to incentivize clean energy (so much so that it got caught up in the Solyndra scandal. The head of Solyndra was an Obama campaign bundler. Obama visited the company and touted it. His administration incentivized companies like it. In 2011, the government helped Solyndra refinance, but just months later, the company failed).

But solar now accounts for some 260,000 energy jobs in the country, the majority of which are held by installers. That's almost four times the number of coal industry jobs, about 70,000, as of May 2015, according to the Bureau of Labor Statistics. And that industry has been on a steady and steep decline over the past 30 years:

The number of coal mining jobs have been on a steady and steep decline over the last 30 years. Danielle Kurtzleben/NPR/Federal Reserve Bank of St. Louis hide caption

In the energy industry, solar is outpaced only by the oil industry, according to a major report by the Solar Foundation. And solar's gotten cheaper to produce (despite Trump's proclamations during the campaign that he loves solar except that it's expensive).

As KQED, an NPR member station in San Francisco, reported in December, "Power from big solar projects is about 70 percent cheaper today than it was a decade ago. Wind power has also come down."

The problem for Democrats is where those jobs are created. It's not like the coal jobs that faded in West Virginia and Kentucky were replaced by solar. In fact, those two states rank 45th and 41st in solar jobs per capita, respectively, according to the Solar Foundation. That's not to mention Michigan (28), Wisconsin (26) and Pennsylvania (43), which flipped blue to red for the first time in decades.

The top six — Massachusetts, Nevada, Vermont, California, Hawaii and Washington, D.C. — all went for Hillary Clinton. (California had more than a third of all solar jobs in 2016, over 100,000. And that was up 32 percent from the year before.)

People in those places also identify heavily as Democrats or Republicans, and there are stark splits on how to deal with the environment. On climate change, for example, a Pew poll from October found that 36 percent of Americans care "a great deal" about the issue of global climate change.

There may be a fundamental reshaping that's taking place economically and politically, and the reverberations will continue to be felt.