Accessibility links
Book Review: 'A Really Big Lunch,' By Jim Harrison Jim Harrison lived as he wrote — vividly. One year after his death, a new collection of his essays on food, wine, writing and aging brings him roaring back in all his immoderate brilliance.

Celebrating A Glorious Life Of Excess In 'A Really Big Lunch'

Celebrating A Glorious Life Of Excess In 'A Really Big Lunch' 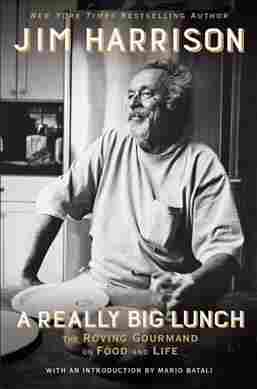 by Jim Harrison and Mario Batali

Jim Harrison lived as he wrote, vividly. When his overtaxed heart finally gave out last year, he left a trail of 40 books, mainly fiction and poetry, in which he conveyed his untamed passions for booze, botany, sex, hunting, fishing and literature. His deep empathy for America's disenfranchised was matched by his overarching intolerance of small-minded "nit-wit authorities." He has been compared to Hemingway and Faulkner, and called the American Rabelais, a Mozart of the Prairie, and a force of nature.

A Really Big Lunch, whose publication marks the first anniversary of Harrison's death, brings him roaring to the page again in all his unapologetic immoderacy, with spicy bon mots and salty language augmented by family photographs. These 47 rambling meditations on food, wine, writing, and aging first appeared between 1981 and 2015, in magazines from Smoke Signals and Brick to Kermit Lynch Wine Merchant. They are a sequel, of sorts, to The Raw and the Cooked: Adventures of a Roving Gourmand, published in 2001.

The title essay, which gained a certain notoriety when it was published in The New Yorker in 2004, chronicles an outrageously over-the-top 37-course lunch in Burgundy, in which Harrison partook with gusto. The menu, culled from 17 cookbooks published between 1654 and 1823, included tart of calf's brain, stew of suckling pig and terrine of hare. Harrison acknowledges that it "likely cost as much as a new Volvo station wagon," but pushes back against critics hilariously: "My response to them is that none of us 12 disciples of gourmandise wanted a new Volvo. We wanted only lunch and since lunch lasted approximately 11 hours we saved money by not having to buy dinner. The defense rests."

Harrison's writing is pungent. He's often a hoot, though frequently exhausting, too.

Harrison's writing is pungent. He's often a hoot, though frequently exhausting, too. Writers, he says, "are isolated stockbrokers of life's essences, and it is always 1929." Preferring to mince garlic rather than words, he's scathing on American politics ("fraught with acute mental dysentery"), publishing ("that Walmart of words"), and the "bliss ninnies" or "body-Nazis" who cotton to what he calls the "Gandhi diet." Tofu, he comments, is "gustatory self-laceration."

His tastes are defiantly carnivorous, and he goes after vegans and vegetarians with a sharpened steak knife. In "Eat Your Heart Out," the earliest and funniest essay in the book, he marks his turf: "A warning to certain of your left-leaning, spit-dribbling, eco-freak readers: I kill much of what I eat; ducks, quail, deer, grouse, woodcock, trout, salmon, bluegills, the lowly carp ... These people should know that technically speaking their bean sprouts scream when they are jerked out by their roots."

Harrison's recipes are not for the delicate. "The rule of thumb," he writes, "is 'moderate to excess.'" He urges people to spend as much as they can on food and wine, because "what you choose to eat directly reflects the quality of your days." Just when I'm calculating how I could reduce the spices in his Pork Spareribs, Chicken, and Hot Italian Sausage by, say, 90 percent, I read: "Do not change or substitute! ... I've written a new novel called Warlock. You tamper with my recipes at your peril!" No wonder he's been called a food bully.

Jim Harrison, 'Legends Of The Fall' Author, Dies At 78

Harrison, an impenitent chain-smoker, wine-guzzler, and over-eater, was not exactly a poster boy for healthy living. Much of the book chronicles his physical decline as his body responds to his "glorious life of excess" with Type 2 diabetes, gout, kidney stones, chronic shingles, and spondylolisthesis. Having to restrict his wine intake and epic walks near his homes in Montana and Arizona drive him "close to cashing out."

Although pain and mortality may be sobering, his language is punch-drunk lively: "Only humor and humility allow you to endure life as a senior with its clear view of a mile-high, neon-lit exit sign," he writes. Describing one of his many pilgrimages to the graves of beloved writers, he calls the interred "dirt-nappers."

Like the 2013 anthology of his wonderful novellas about Brown Dog, a charming Chippewa-Finnish woodsman, lecher, and philosophizing free spirit, this collection has not been edited for continuity, so repetitions abound. We read over and over again that Harrison's books have sold much better in France than America, that red wine is "liquid fuel," and that his dear friend Mario Batali makes heavenly lardo (the neck fat of a specially fed pig). The legendary 11-hour lunch grows to 12 hours and then 13, but is always accompanied by "just" 19 different wines.

Reading this book straight through is not advised, unless you have the stamina of those gourmands at the really big lunch. But snacking on classic Harrisonisms like "I've never been the man I used to be" is deliciously filling.