Accessibility links
Fishermen Catch 50-Pound Carp In The Middle Of Los Angeles MacArthur Park in Los Angeles is not the most picturesque location, but it is where the California Ghetto Carping Club caught a 50 pound carp this week. 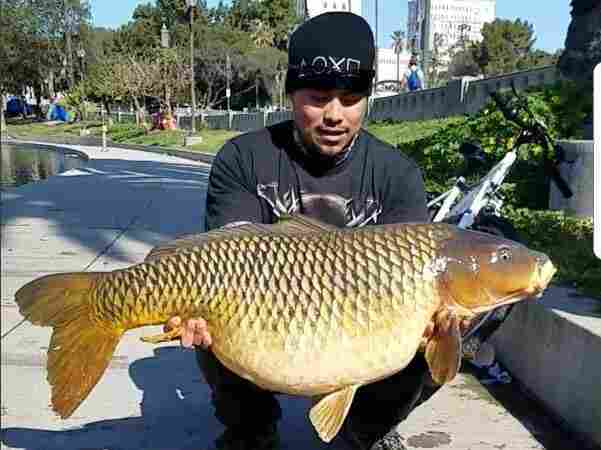 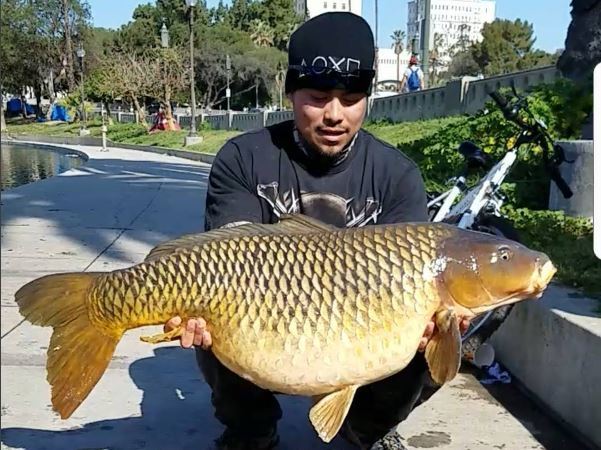 MacArthur Park is in the middle of Los Angeles, near downtown. At the center of the park is a small lake, and it's not most people's idea of a picturesque fishing spot.

It was there that the California Ghetto Carping club caught a record breaking fish this week — a 50-pound carp.

"You got hundreds of homeless there," says Sergio Talavera (or "Big Serg") the president of the fishing club. "Every time we get there, we have to make sure that we're not going to be sitting on needles. You see the syringes floating in the water, on the ground. It's just one of those parks that where they tell you, the sun goes down there, you better get out of there."

Talavera and his fellow club members are proud to fish for carp in some of Los Angeles' less desirable spots.

"Any park in Los Angeles that the normal fisherman will not go, we will go," Talavera says. "We grew up in this kind of environment, so it's no big deal to us."

Club member Eddie Salmeron caught the massive fish. He was fishing and chatting with Talavera when he got a bite — and it was a big one.

The fish was so big that at first, Salmeron couldn't reel it in. So he kept tension on the line and waited for the fish to tire out. Finally, it was 12 yards away.

"Big Serg saw it and that's when he screamed, 'Ed, it's huge! It's a monster!' and I started shaking," Salmeron says. "I starting getting tunnel vision. I couldn't focus on nothing else."

It was a 50-pound carp in the middle of L.A. The fish was so big it barely fit in the net.

"This fish was so massive, it was huggable," Salmeron says. "It looked like those big teddy bears that you get on the carnival rides when you win 'em, the big fat plumpy ones — that's how fat that fish was."

So for any fishermen and women out there, you might want to add L.A.'s MacArthur park to the list of possible vacations.

And if you go, you have a chance at a 50-pounder — the California Ghetto Carping club is strictly catch-and-release. That massive, huggable fish is swimming at the bottom of MacArthur Park Lake right now, getting even bigger.