Accessibility links
The U.S. Is Ramping Up Military Engagement, Which Could Be A Risk For Trump President Trump seems to have given the U.S. military a freer hand — but without apparent diplomatic or political strategies to accompany the increased military engagement. 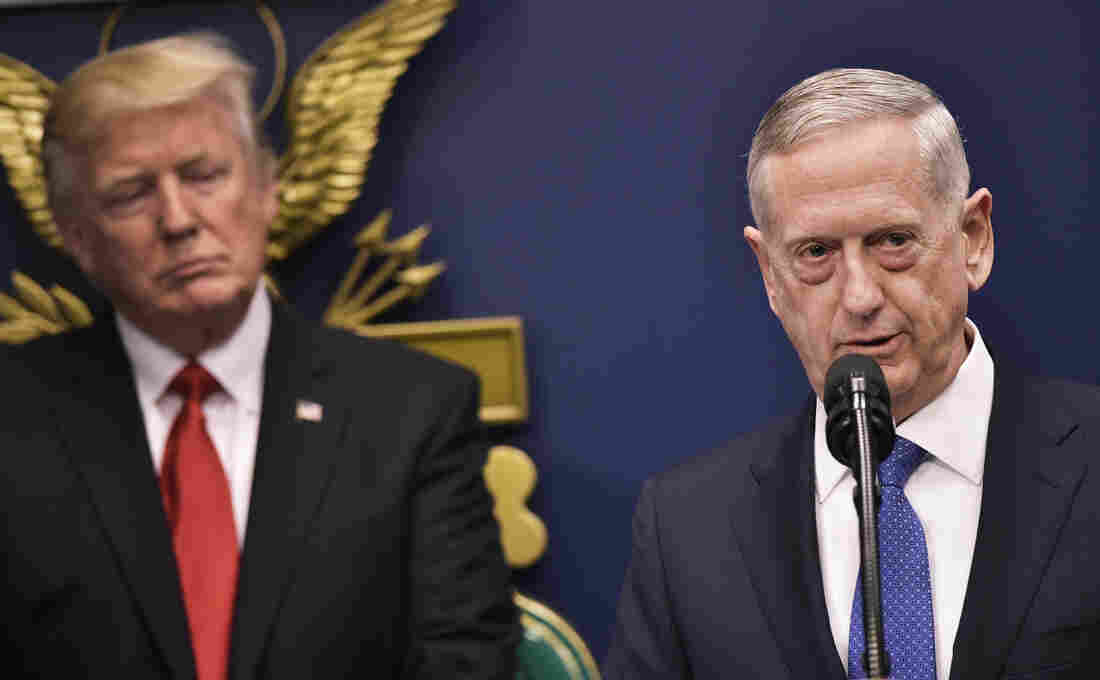 James Mattis speaks after his ceremonial swearing-in as secretary of defense on Jan. 17. In the Trump administration, Mattis and the Pentagon appear to have been given a freer hand. Mandel Ngan/AFP/Getty Images hide caption 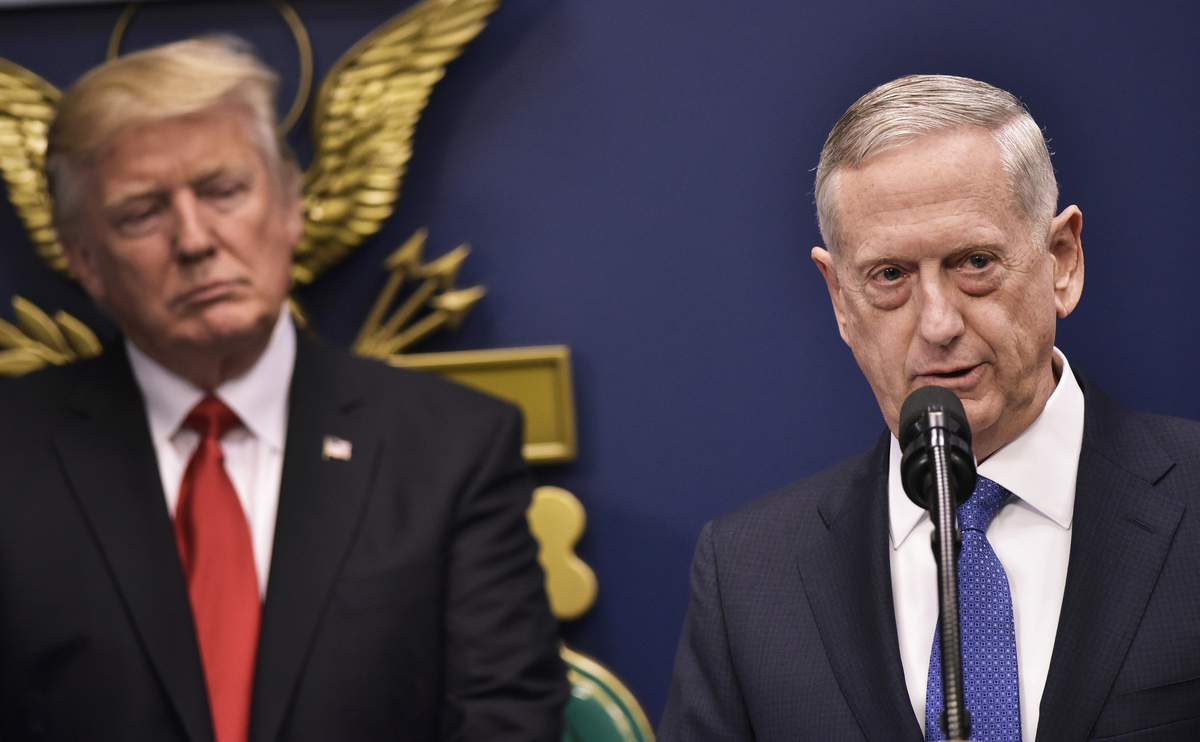 James Mattis speaks after his ceremonial swearing-in as secretary of defense on Jan. 17. In the Trump administration, Mattis and the Pentagon appear to have been given a freer hand.

While the political world continues to focus on the machinations of congressional investigations about Russia (which won't have conclusions drawn for months, if not longer) and where health care goes from here, there's another, arguably more important story going on — ramped-up military engagement.

"The United States launched more airstrikes in Yemen this month than during all of last year. In Syria, it has airlifted local forces to front-line positions and has been accused of killing civilians in airstrikes. In Iraq, American troops and aircraft are central in supporting an urban offensive in Mosul, where airstrikes killed scores of people on March 17.

"Two months after the inauguration of President Trump, indications are mounting that the United States military is deepening its involvement in a string of complex wars in the Middle East that lack clear endgames."

Trump vowed to "bomb the s*** out of them," said he knew more about fighting ISIS than the generals ("believe me") and that the generals had been reduced to "rubble" under President Obama.

Now, it appears Trump is giving the generals more room to run. While some of the tactics are similar to what Obama was doing, there is clearly a ramped-up effort. NPR's Tom Bowman reports that the Trump administration has been more aggressive with increased bombing — some 7,000 allied strikes in the past two months, more than any two-month period since the campaign against ISIS began in 2014. There are more troops fighting now and possibly more to come. Trump promised as many as 30,000 more during the presidential race.

The stepped-up use of American military muscle in multiple conflicts in the Middle East is a risky move by Trump because it is being undertaken without apparent accompanying diplomatic and political strategies for when the conflicts come to an end.

The long-standing complaint inside the national security world was that President Obama and national security adviser Susan Rice micromanaged everything from the White House, including matters that should have been left to the Pentagon or commanders in the field. Now, as Trump swings this pendulum the other way, the Pentagon says that doesn't mean it is not being careful.

"We have not relaxed the rules of engagement," Gen. Joseph Votel, head of U.S. Central Command, said in a hearing before the House Armed Services Committee Wednesday. He added, "We acknowledge our responsibility to act at a higher standard."

U.S. forces have been criticized for an airstrike carried out in Mosul, as allied forces try to take back the city from ISIS. Iraqi officials say the strike killed more than 100 civilians. There is evidence ISIS is using civilians as shields and provoked the airstrike by herding civilians into the building and putting a sniper on the roof. The U.S. is investigating the incident.

Tillerson: Defeating ISIS 'No. 1 Goal' for U.S., But Others Should Do More

The Times reports, per Votel, that "the new procedures made it easier for commanders in the field to call in airstrikes without waiting for permission from more senior officers."

All of that points to a more hands-off approach from Trump. That didn't work out so well in Trump's first authorized mission — in Yemen, where an American Navy SEAL was killed.

The focus isn't just on ISIS and al-Qaida. Gen. John W. Nicholson, the commander in Afghanistan, told the Senate Armed Services Committee that the U.S. has "a shortfall of a few thousand" in the country.

And what happens with Iran? Former national security adviser Michael Flynn said Iran was "on notice," but he's gone. John Bolton, the former U.N. ambassador under George W. Bush and noted Iran hawk, was spotted a week ago going into the White House. A week earlier, he said this: "It's a time for America not to be a shrinking violet, but to show strength."

Bolton was also under consideration for secretary of state and as Flynn's replacement. Does his influence grow stronger with Trump? And what happens if there's an Iranian provocation in the Persian Gulf, like grabbing sailors or swarming U.S. ships?

Remember, two months before his election, Trump said this about Iran: "When they circle our beautiful destroyers with their little boats and they make gestures at our people that they shouldn't be allowed to make, they will be shot out of the water, OK? Believe me."

At the same time, Trump has proposed decreasing funding to the State Department. On Thursday, his secretary of state, Rex Tillerson, meets with Turkey's president, an early test of Tillerson's diplomatic skills.

Turkey is critical in the fight against ISIS, but the relationship with Turkey has grown thorny. And Tillerson, who is trying to find his diplomatic sea legs, still hasn't hired a deputy.

Even though Trump's budget proposals are just those — proposals — they do indicate Trump's agenda priorities. If it's increased defense spending and a military response and decreased diplomacy and political solutions, the U.S. — and Trump — risk being in similar or worse shape than during the Iraq War.

Diplomatic and political solutions, after all, are necessary for rebuilding efforts.

As Robert Malley, vice president for policy at the International Crisis Group and a former Obama administration official, told the Times: "The military will be the first to tell you that a military operation is only as good as the diplomatic and political plan that comes with it."

And while Americans may be more apt to support some level of intervention since the rise of ISIS, nation-building is a different story.