Accessibility links
If Trump Is Traveling And A Pilot Strays, Fighter Jets Will Follow Traveling U.S. presidents get a flight restriction with a radius that spans 30 nautical miles. When pilots fly inside that airspace, they risk being intercepted by the Air Force. 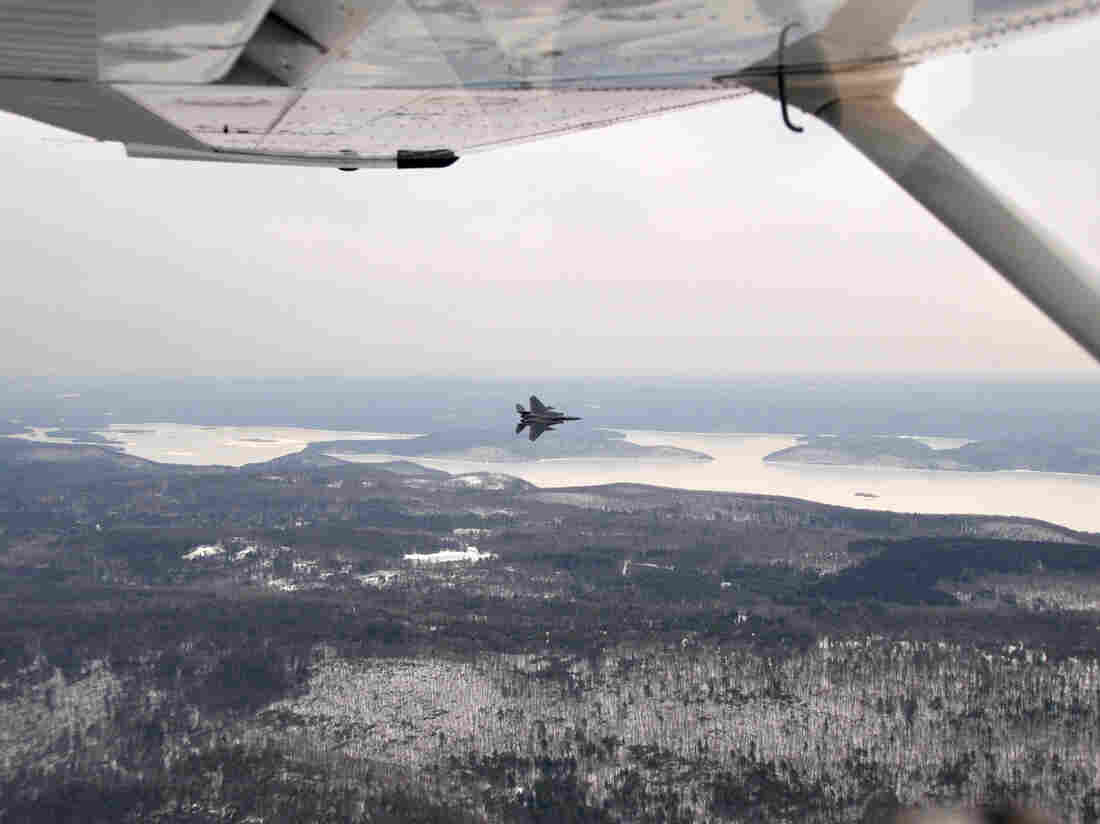 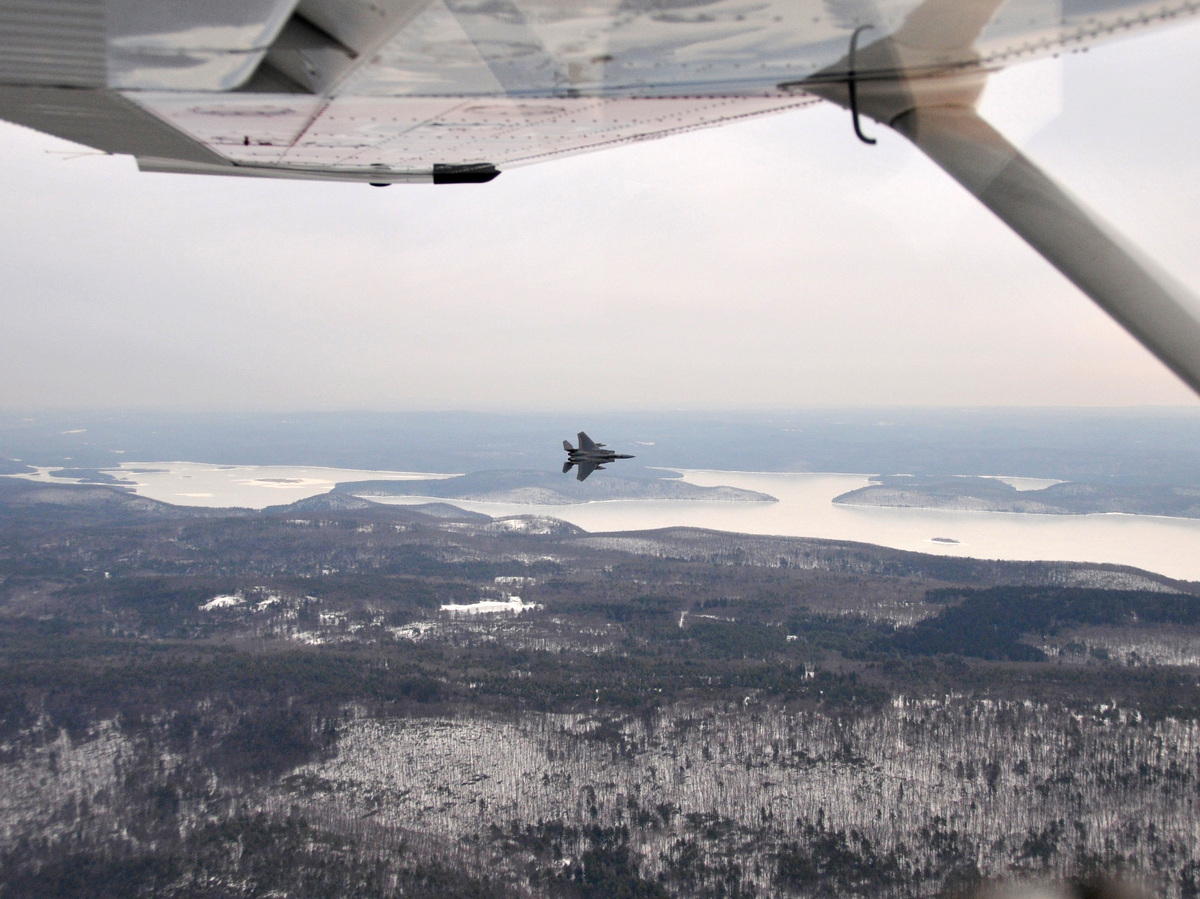 The Massachusetts Civil Air Patrol and the 104th Fighter Wing participate in an alert scramble exercise at Barnes Air National Guard Base in Westfield, Mass.

A lone, single-engine Cessna airplane enters restricted airspace. The pilot ignores air traffic control, so the plane stays on course. That's when the F-16 fighter jet shows up outside the window with a warning call that blares over the radio: "You've been intercepted."

This is what happened during a training exercise recorded by the Aircraft Owners and Pilots Association, and conducted by the Civil Air Patrol and the Colorado Air National Guard.

Air Force alert pilots practice this regularly, in part to protect the commander in chief. Since Sept. 11, 2001, traveling U.S. presidents get a flight restriction with a radius that spans 30 nautical miles.

It's already happened since President Trump started visiting his so-called "Southern White House" at Mar-a-Lago in Palm Beach, Fla. The FAA reports that 38 aircraft have violated the temporary flight restriction near Palm Beach since February.

In total, nine of those violations resulted in intercepts, which means fighter jets scrambled to flank the aircraft and escort the plane out of restricted airspace. One of the incidents involved an unresponsive plane intercepted by a pair of F-15s that had to fly at supersonic speed.

Since Sept. 11, 2001, the North American Aerospace Defense Command has conducted more than 1,800 flight intercepts of commercial and general aviation aircraft.

Brig. Gen. Paul Ormsby is responsible for air defense readiness over the continental U.S. He says most airspace violators fit a common profile.

"Quite frankly, they're innocent folks," Ormsby says. "They have no ill-intent. They just simply wandered into the area without realizing that they're in it."

That moment of realization is caught on an audio recording posted on LiveATC.net. A Cessna pilot flies into President Obama's restricted airspace. He gets a call from air traffic control:

"You're in the temporary flight restriction area, are you aware of that, sir?"

The pilot immediately responds: "Uh, no, sir. I am not."

The pilot is then informed that the F-16s shadowing his airplane have intercepted him. The pilot apologizes for the trouble and air traffic control gives him a new heading to a nearby runway.

"Cleared to land," the voice says over the radio. "I think there are some people who are going to want to talk to you." 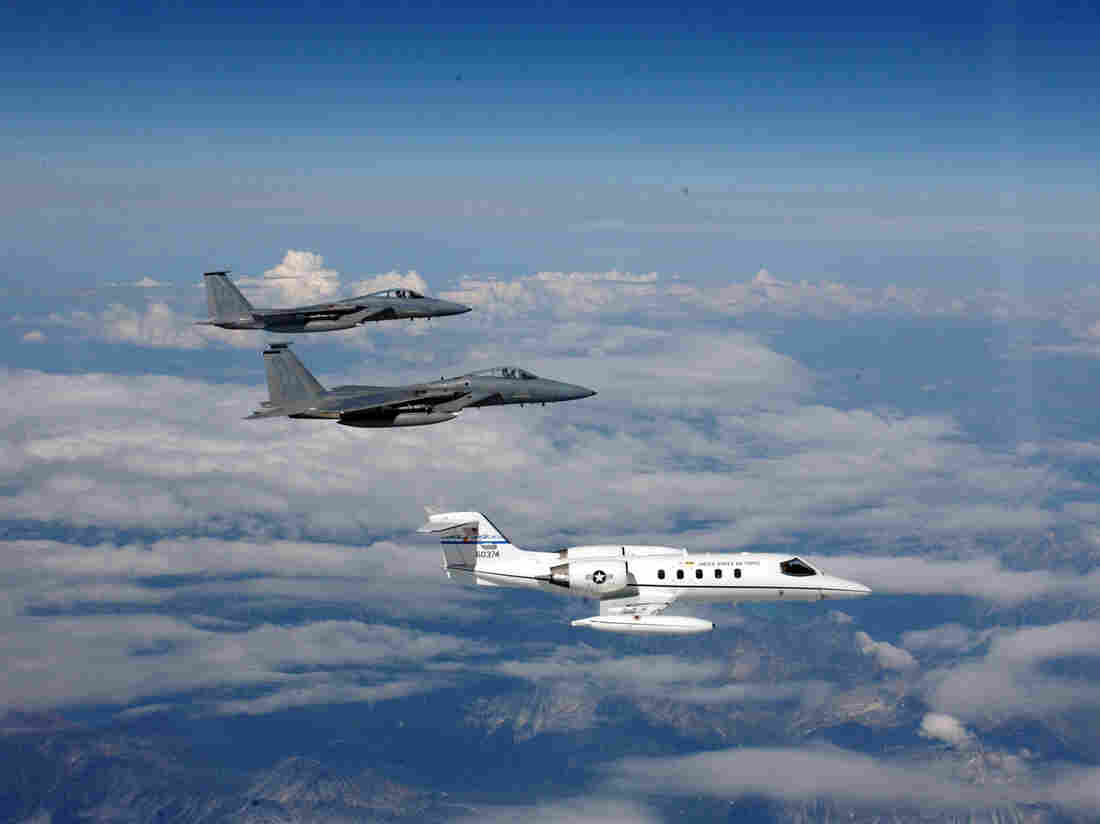 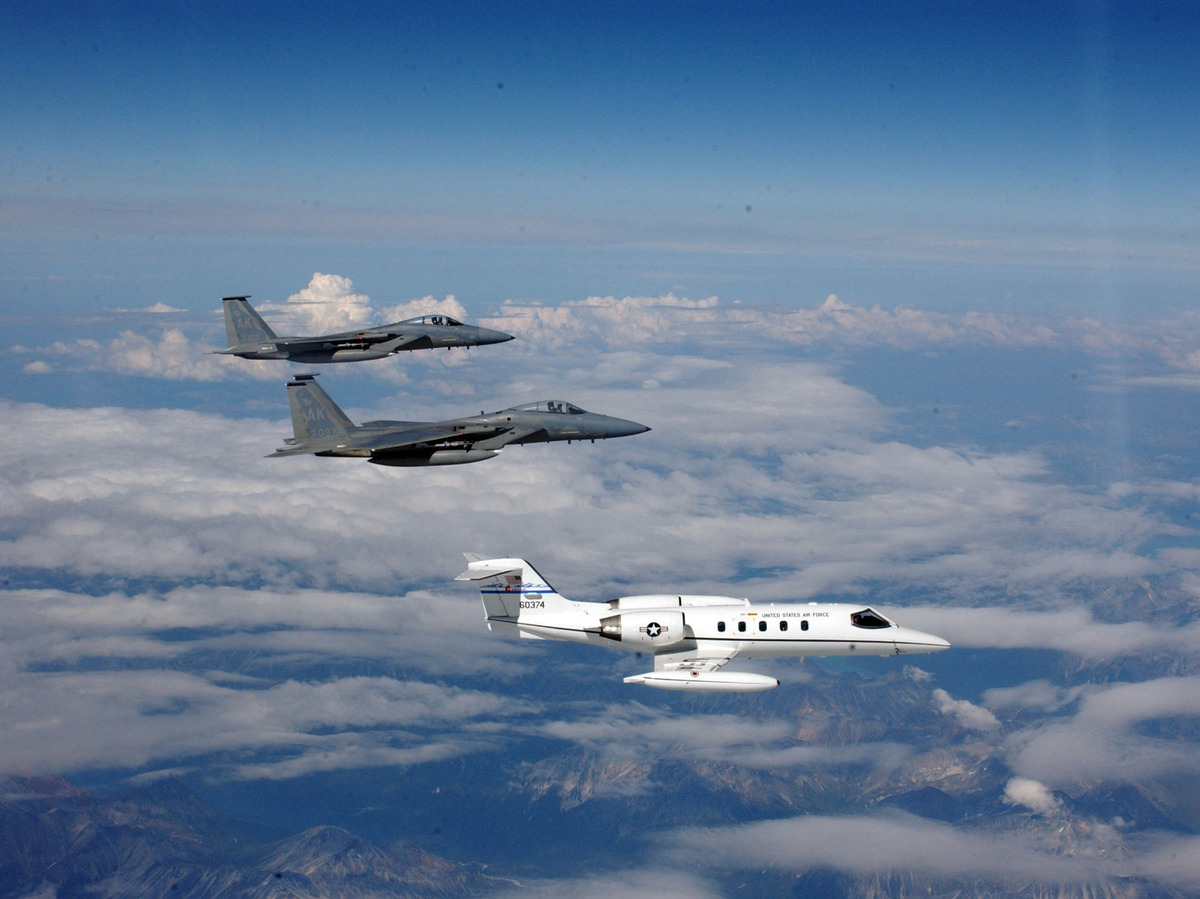 Two F-15 Eagles from Elmendorf Air Force Base, Alaska, intercept a C-21 during a homeland defense exercise in Alaska.

"Once you land, the law enforcement response is swift," Melissa Rudinger says. She's the vice president of government and regulatory affairs with the Aircraft Owners and Pilots Association. "You're facedown on the concrete, probably surrounded by a couple of weapons until they can get everything sorted out."

Rudinger has witnessed flight intercepts outside her office window at Frederick Municipal Airport in Maryland.

"Typically, nobody's arrested and the person's interviewed and they're free to go," she says.

The penalty is usually a suspended license. And these interceptions aren't cheap. According to the Air Force, the operating cost of a fighter jet can run as high as $34,000 per hour.

Plus, the FAA constantly updates flight restrictions on what's called a Notice to Airmen, or NOTAM. Pilots should always know the areas to avoid along their flight path.

Still, Rudinger says every time the president leaves Washington, there will likely be airspace violations.

"Especially if the president has a propensity to go somewhere where there's a lot of airports — a lot of air traffic activity like Florida, like the Palm Beach coast," she says. "That's a huge general aviation area in this country."

Rudinger says it's clear that Trump likes to be on the go, so she expects these flight restrictions will continue to be a problem.

Previous audio and Web versions of this story stated that President Trump sometimes visits his other home in New York City. He has not yet visited New York City as president.