Accessibility links
'Nabokov's Favorite Word Is Mauve' Crunches The (Literary) Numbers In his new book, statistician Ben Blatt loads thousands of books, new and old, into a vast database and uncovers intriguing patterns in how our favorite authors write. 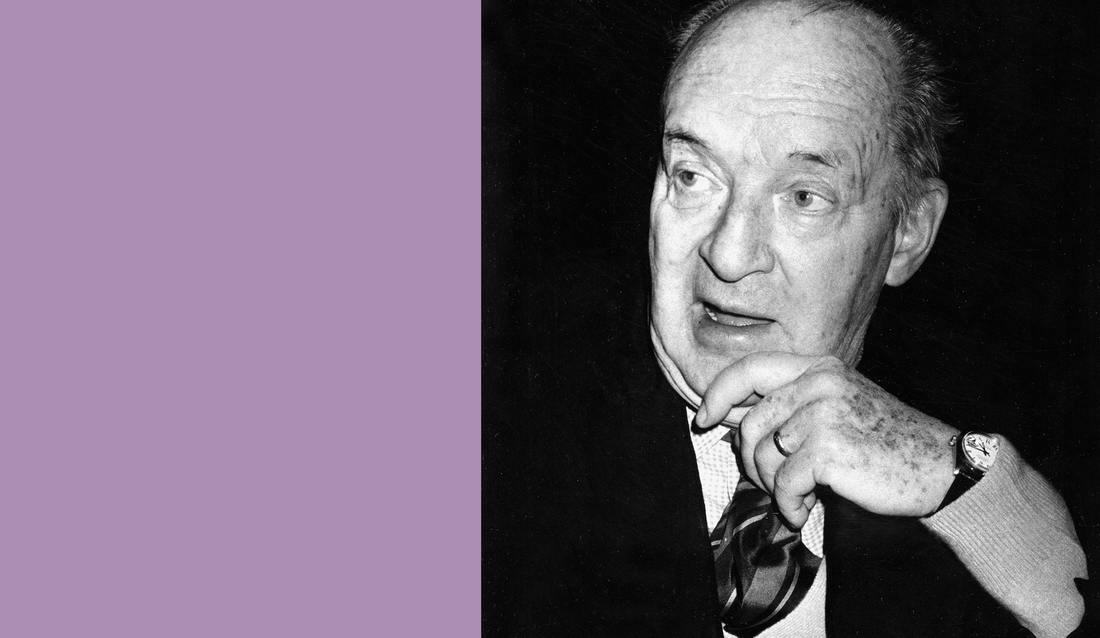 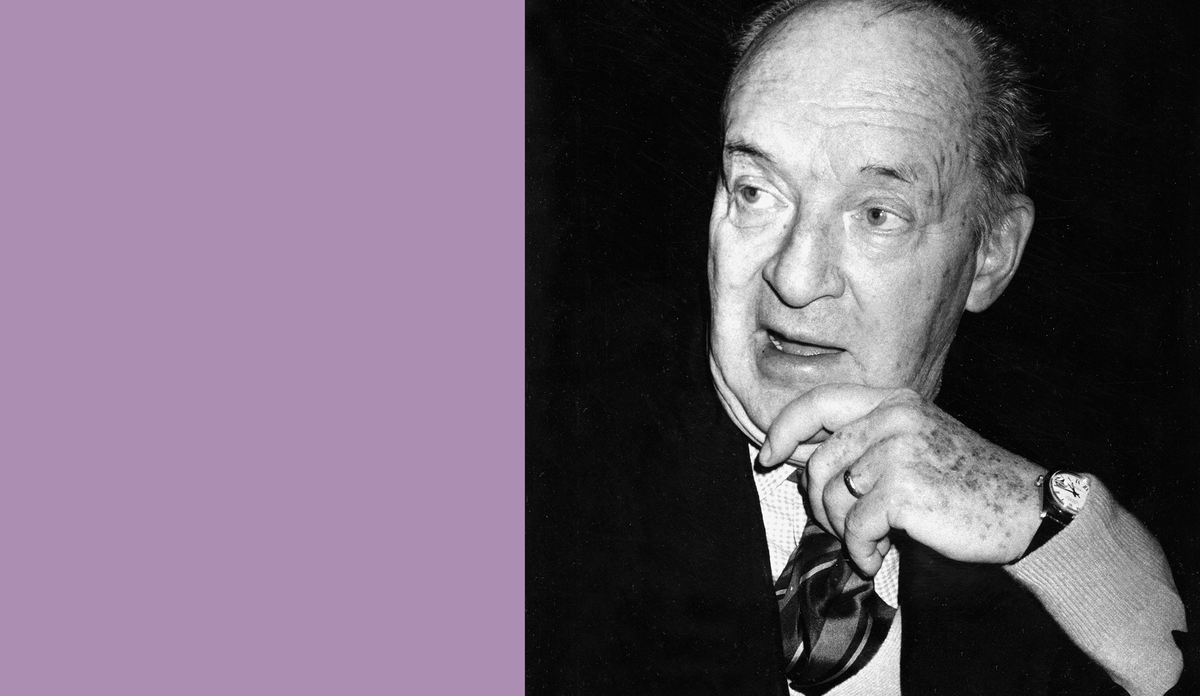 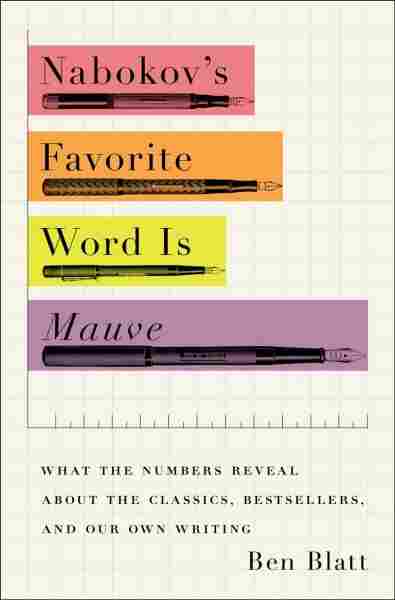 What the Numbers Reveal About the Classics, Bestsellers, and Our Own Writing

Title
Nabokov's Favorite Word Is Mauve
Subtitle
What the Numbers Reveal About the Classics, Bestsellers, and Our Own Writing
Author
Ben Blatt

Let's acknowledge this at the top: It's a thin slice.

To gaze across the great swath of written English over the past few centuries — that teeming, jostling, elbow-throwing riot of characters and places and stories and ideas — only to isolate, with dispassionate precision, some stray, infinitesimal data point such as which author uses cliches like "missing the forest for the trees" the most, would be like ...

Well. You get it. More like missing the forest for the raspberry seed stuck to the underside of the 395th leaf on the 139th branch of the 223,825th tree.

But that's what statistician Ben Blatt's new book, Nabokov's Favorite Word is Mauve, sets out to do, thin slice by thin slice.

He loaded thousands of books — classics and contemporary best-sellers — into various databases and let his hard drive churn through them, seeking to determine, for example, if our favorite authors follow conventional writing advice about using cliches, adverbs and exclamation points (they mostly do); if men and women write differently (yep); if an algorithm can identify a writer from his or her prose style (it can); and which authors use the shortest first sentences (Toni Morrison, Margaret Atwood, Mark Twain) versus those who use the longest (Salman Rushdie, Michael Chabon, Edith Wharton).

I can hear thousands of monocles dropping into thousands of cups of Earl Grey from here. "But what of literature?" you sputter. "What does any of that technical folderol have to do," — here you start wiping your monocle on your nosegay — "with ART?"

Not much, is the answer. Blatt's book isn't terribly interested in the art of writing. What it's fascinated by — and is fascinating about — is the craft of writing.

A Balm For Bookish Know-it-Alls 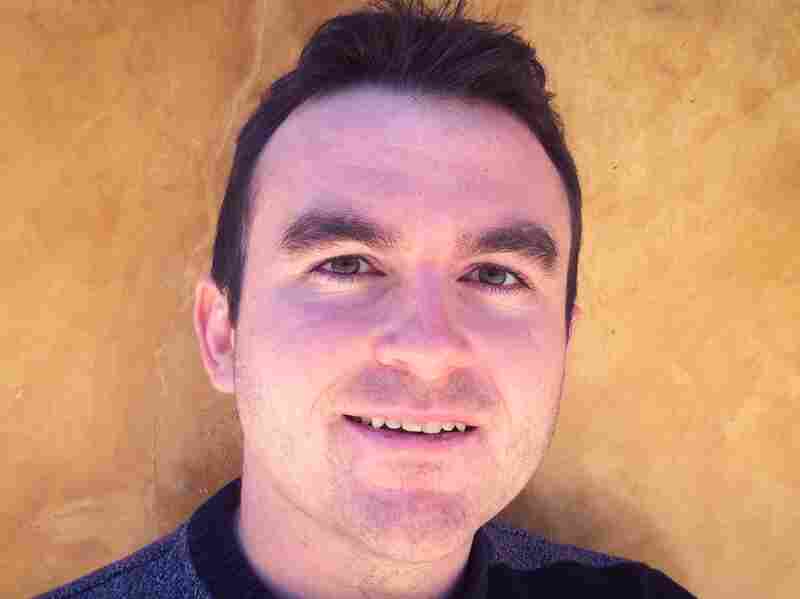 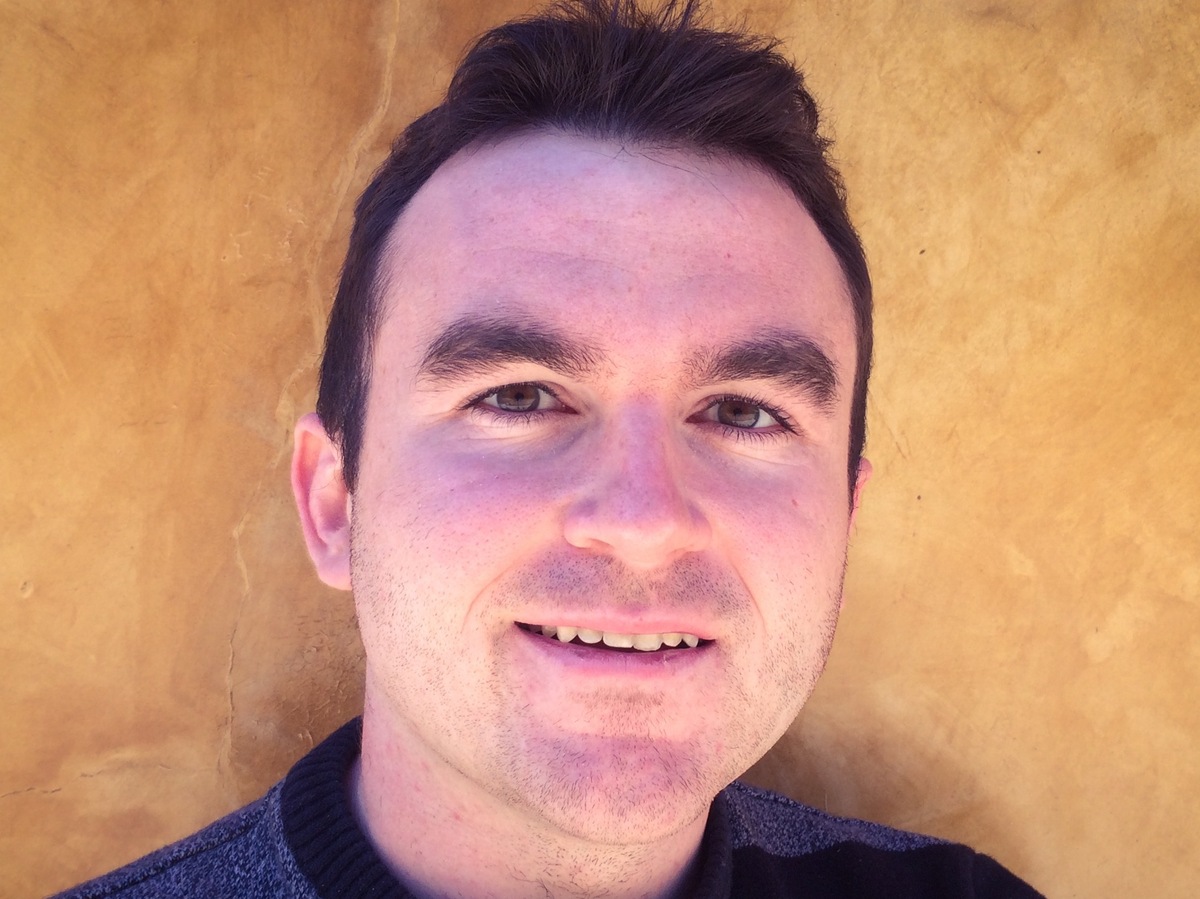 Author Ben Blatt is a journalist and statistician.

To say that you likely won't find much that's truly surprising in Nabokov's Favorite Word is Mauve isn't a critique. In fact, it's kind of the point. Reading it, you experience the feeling, again and again, of having some vague, squishy notion you've always sort of held about a given author getting ruthlessly distilled into a stark, cold, numerical fact.

Which is, if you're the kind of person who likes to get proven right (hi!), a hell of a lot of fun.

Now: It's a book of statistics, and statistics rest on distinct sets of assumptions that must get made before any number can start getting well and truly crunched. So if you're curious about Blatt's methodology, boy are you in luck. Every chapter begins with Blatt chattily sharing with the reader — as chattily as a book this eager to walk us through the formula used to calculate Flesch-Kincaide Grade Levels can be — every aspect of his thinking. How he defines "Great Books." What constitutes a long sentence. Which chapter-endings qualify as cliffhangers, and which merely ... abrupt.

He drags you into the weeds with him, but he's a personable writer, and he's brought along a picnic lunch, so you don't mind the bugs.

Herewith, some of my favorite of Blatt's findings in Nabokov's Favorite Word is Mauve: 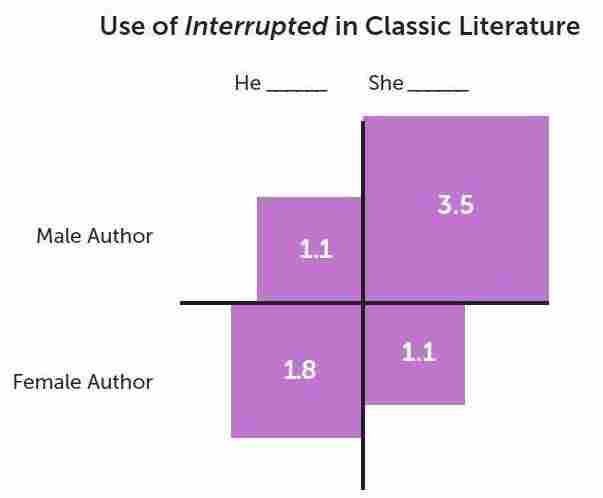 Maidens, Interrupted: A chart of word use in classic literature, from Nabokov's Favorite Word is Mauve. Simon & Schuster hide caption 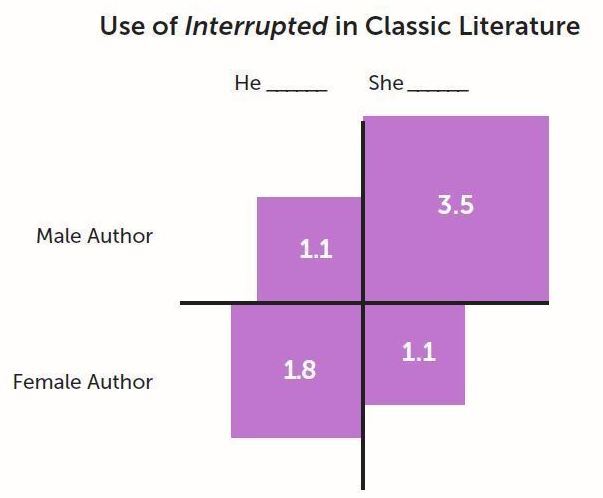 Maidens, Interrupted: A chart of word use in classic literature, from Nabokov's Favorite Word is Mauve.

It tuns out that — sit down for this next bit — authors who are women write equally about men and women, but men write overwhelmingly about men.

I know. I'm shaken, over here.

Also: Male authors of classic literature are three times as likely to write that a female character "interrupted" than male characters. In contemporary popular and literary fiction, the ratio is smaller, but it's still there.

Blatt looked for the specific words that authors use much more frequently than the rate at which those words generally occur in the rest of written English (i.e., compared to a huge sample of literary works — some 385 million words in total — written in English between 1810 and 2009, assembled by linguists at Brigham Young Univeristy).

His criteria: A favorite word -

Here's some that jumped out at me.

Ian Fleming: lavatory, trouser, spangled ("Pardon me, Blofeld; must dash to the lavatory, got something spangled on me trouser.")

Vladimir Nabokov: mauve, banal, pun (As Blatt points out, Nabokov had synesthesia, a condition that caused him to associate various colors with the sound and shape of letters and words. "Mauve" was his favorite: He used the word at a rate that's 44 times higher than the rate at which it occurs in the BYU sample of written English.)

You know: nearly, suddenly, sloppily, etc. Writing teachers tell you to avoid them, that they sap the energy from a sentence. Strong, clear writing is fueled by verbs and nouns, they say, not by adjectives and adverbs.

Turns out, the adverb thing holds up: When Blatt combined several lists of the "Great Books" of the 20th century, he came up with 37 which were generally considered great.

Well I mean: I hate 'em, at least. My husband uses them like they're powdered sugar and his emails are lemon bars. But I hate 'em.

You know who doesn't hate 'em? Besides my husband, I mean? James Joyce. Dude loved them.

Blatt took a sample of 50 authors of classics and contemporary best-sellers, totaling 580 books. The authors who used the most exclamation points per 100,000 words were:

IT'S RAINING CATS AND DOGS AND CLICHES

When it comes to use of cliches, there's another gender split.

In Blatt's list of 50 classic and best-selling authors (scroll down to the bottom of this post to see them all), those who use cliches most frequently? All men.

3. Kurt Vonnegut (140. All those "And so it goes"es in Slaughterhouse-Five really hurt him here, I bet.)

The authors who used the fewest cliches? All women.

Now, again: It's a thin slice, looking at literature in this knowingly reductive way. It doesn't tell you everything, and of course it doesn't give you a true sense of the feeling you get when you read these authors for yourself.

But what it often succeeds in capturing, with astonishing clarity, is your feeling about these authors.

Case in point: The author who is most likely to mention the weather in the opening sentence? 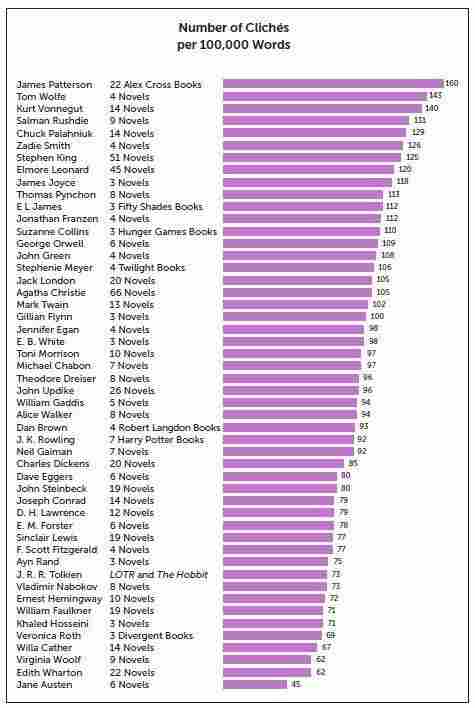 A ranking of authors by cliche-use, from Nabokov's Favorite Word is Mauve. Simon & Schuster hide caption

An earlier version of this post slightly misstated Blatt's finding about adverbs, by concluding "Of [the 37 books generally considered 'Great'], 2 out of 3 — 67 percent — contained a significantly lower number of adverbs (less than 50 per 10,000 words) than occurs, on average, in written English."

The 67 percent figure instead refers to the portion of books by "great authors" that are considered great, and that meet criteria for low-adverb rate stated in the corrected text.