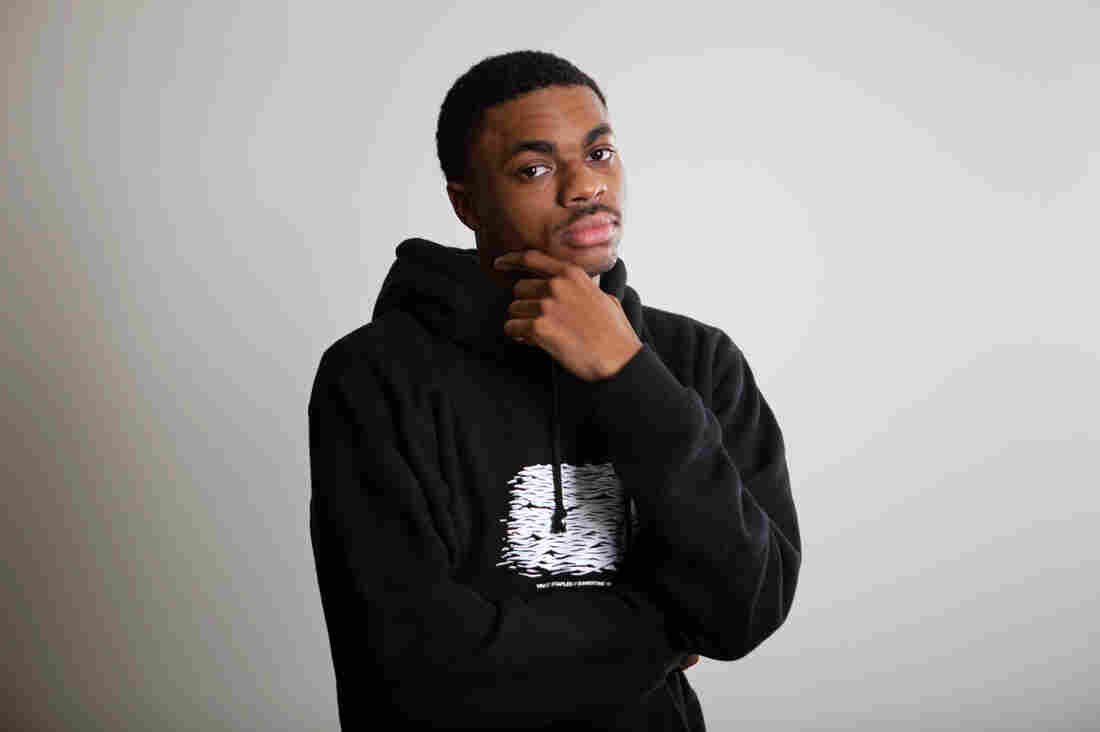 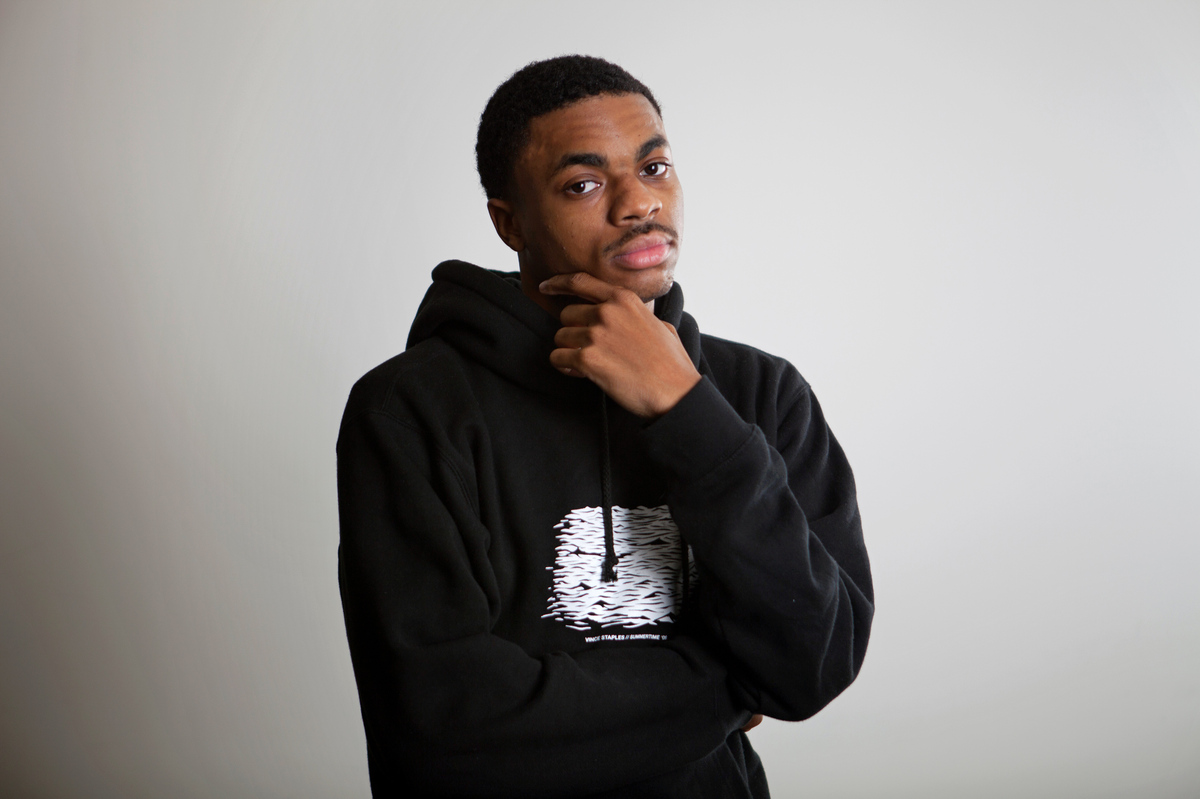 Vince Staples is currently traveling the country on The Life Aquatic Tour.

Long Beach, Calif., has produced such legendary rappers as Snoop Dogg, Warren G and the late Nate Dogg, all of whom won international acclaim — and persistent criticism — for work that some said glorified gang life. Now, a generation later, the city has a new star: Vince Staples.

Staples first turned heads with his album Summertime '06, released in 2015, about growing up in Long Beach and his time in the notorious Los Angeles gang the Crips. Two years later, Staples is still getting acclaim for his music. Rolling Stone called him "one of hip-hop's true rising stars" — and he's only 23.

Now, Staples is getting ready to release a second album, which he told Vice will be called Big Fish Theory. He's currently touring, and on his way through Washington, D.C., he stopped by NPR's studios to speak with Michel Martin. Hear their conversation at the audio link, and read on for an edited transcript.

Vince Staples: 'My Job Is To Keep My Sanity'

Michel Martin: I take it you're not all that comfortable with the acclaim you've received. I read in one interview that you said, "I'm not a star. I'm a person with a job."

Vince Staples: That was me being sarcastic because, you know, they liked it. No, it's just — the idea of the "magical Negro."

So you're not magical.

No, what a magical Negro means is "Oh, you're smart?" "Oh, you're talented?" That means they're assuming that you're not supposed to be. So they can kind of keep those compliments — they're backhanded.

One of the things that people have noted about you is that you take a lot of the tropes that people are used to and you twist it around. Your short film Prima Donna opens with this stereotypical hip-hop scene, with scantily-clad women shaking their butts in your face, and then within a minute, you see it's a set, it's all made up. And you kind of turn it on its head and offer some really pointed reflections about fame, money and celebrity. You do seem like an old soul, like you've lived a lot longer than your years, and I'm wondering where those insights come from.

Now, this would be my question, just to play devil's advocate. What's the appropriate amount of years to have that insight?

I think it's less about that and more just about what you take from your personal experiences. 'Cause you can learn something in 15 minutes, [that] it could take someone 15 years to learn. So I don't think it's really a timetable. I think it just depends on what you choose to pay attention to based on your experiences. 'Cause we all have opportunities to learn the same things, essentially. Sometimes we just avoid them.

You've also been really open about the fact that a lot of the things you talk about have been real in your life — things that you've seen, things that you've experienced. You've said that gangbanging isn't something you opt into, it's something that's around you. Is that how you'd describe it?

I don't really feel the need to describe it, for the simple fact that you can go see and ask someone that is there. This is my thing: We gotta stop pretending that we care about people, and what they do, if we don't. That's an honest thing — 'cause what it is, is a sense of camaraderie, sense of brotherhood, sense of belonging. The same way if you live in this country, you're American; if you live in another country you can be whatever they call it there. You're a Democrat or you're a Republican. You're this or you're that. You're black or you're white. We all belong to different sects and different — different spaces within something that exists above us.

And there is no difference. There's literally no difference. Because if someone goes to the Army it becomes, "oh, I'm not in the Army, I'm in the Marines." "I'm not in the Marines, I'm in the Air Force." There is a certain sense of belonging that they all get from there. And sometimes those things lead to things that are considered to be inhumane. Let's not speak about crime, let's speak about the thought of, you know, respecting humanity.

This is my thing about that question. That question isn't, "Oh, why do gangs happen?" It [isn't] like, "Oh, wow, why do these black and brown and Pacific Islander — why do these little boys with no structure, no one guiding them, why do they need each other? Why are they trying to figure out life on their own?" That's really what it is. It's nothing else. [But] when you speak about gang structure, people ask about killing, robbing and things that are considered crime. They don't care about anything else.

I feel like it's kind of annoying to hear those things. Because you can't find a Jay Z article where they don't speak about him selling drugs. You can't find a Vince Staples article where it doesn't say, "Ex-gang member, rapper from yada yada yada, Vince Staples says this, this, that and that." Because we live in a space where your name isn't enough.

When you see an article about Adele they don't say "scorned ex-girlfriend." ... but that's us. See what I'm saying? But at the end of the day, no one's asking why.

In your song "Lift Me Up," you say, "All these white folks chanting when I asked 'em where my n***** at / Goin' crazy, got me goin' crazy, I can't get with that." How do you feel about the fact that you have such a large fan base of white people?

I don't feel any type of way. ... When you perform, when you say that line, you see people start to look at one another. And when they look at one another, they self-assess: "Is he talking about me? Is he talking about him? I love black people, I just kinda like the songs. How dare you judge me for listening to your music" — it forces people to think about themselves, which is a very hard thing to do sometimes. And, all I just say is it's a statement. I wonder if they know that we notice it, is really where it came from. It was very lighthearted. Because it happens. You get to a song, certain songs — that's part of the vocabulary. When we get to that part of that song, it's quiet.

Some of the same criticisms that attended to an earlier generation of rappers have resurfaced. Last October, a woman took exception to "Norf Norf" and posted a video response that went viral — she said,"I cannot believe this stuff is on the radio! This is what our youth is being subjected to."

What made a lot of people turn their heads is that you were very kind about it. You defended her, you said that people should--

Really? What was she right about?

My question is, why can we listen to that and pass it off like it's not a problem? When you see a film and you see a murder scene or a rape scene or something that's displaying an element of trauma, we don't look at it and go, "This movie's f****** great, I'm having a great time, are you?" We feel for that. Know what I'm saying? But it doesn't necessarily happen in that sense when we're speaking about music. So I didn't make that song for it to make people happy. So I don't have a problem with what she said. You got a reaction — isn't that the point, essentially?

But you could have rallied the troops. I mean, there were a lot of people dumping on her. And you didn't do that.

But when you have people who are able to, you know, just write people off as if they don't have an opinion or feelings or motives behind the things they say, that's the corny part. You're worse than her because she shared her opinion.

She never said one negative thing about me. At all. Her statement was that she doesn't understand how this is getting to major airwaves — which is debatable, it's fair for her to feel that way. And most of [all], she kind of felt bad about the fact that it was possible that these things could really happen. Shouldn't we be, you know, happy that someone actually is considering the fact that this really happens, rather than passing it off as fable or just ignoring it?

So what are you dreaming about now?

I think we just take it day by day, we try to find new methods of creating things and just trying to do something new and — making sure that when it's all over, you know, we've added and not just taken away.

Something that [producer] No I.D. says all the time is that there's no museum for this. There's no — there's nothing dedicated to the quality of art, or the leaps and bounds taken, or the sacrifices and the risks that are made just for the sake of creation. There's no museum for hip-hop, you see, there's no museum for music, essentially. We have a Rock and Roll Hall of Fame, but that word is what just kind of destroys it all for me. We're speaking on fame, not the aspects of art, the creativity — which kind of can become two completely different things at a certain point in time. So just trying to be the most creative and create something that's never been done before, which is a reoccurring challenge.

Staples' latest single "BagBak" will be featured on the rapper's upcoming album.