Accessibility links
Beyond The Mike Pence Misogyny Debate, The 3 'Billy Graham Rules' You Haven't Read Like the famous preacher, the vice president won't dine alone with a woman other than his wife. But Graham, pastor to the presidents, had other rules, like don't inflate the size of your crowds. 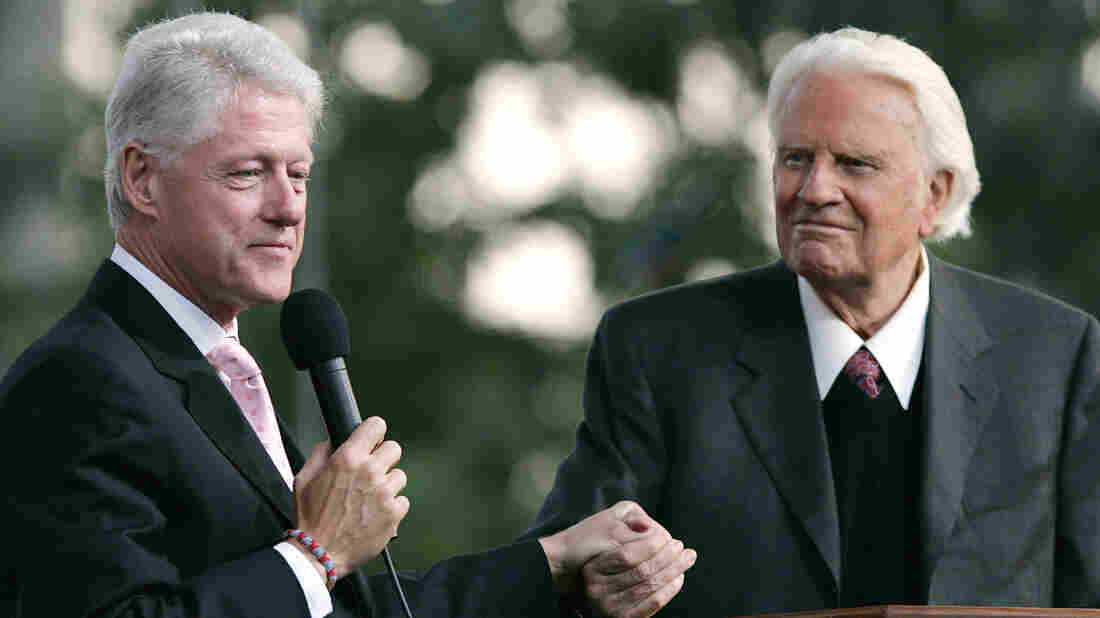 Graham set out strict rules to keep his ministry from having any whiff of impropriety. That broad philosophy could be useful to White Houses. Stephen Chernin/Getty Images hide caption 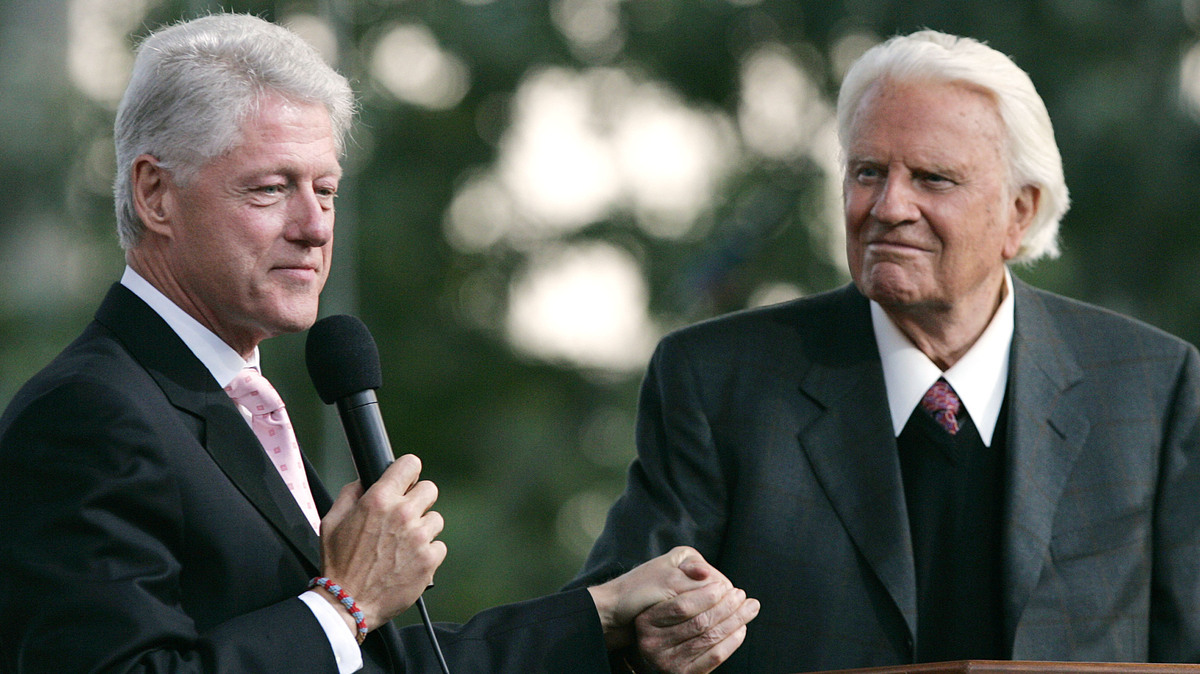 Graham set out strict rules to keep his ministry from having any whiff of impropriety. That broad philosophy could be useful to White Houses.

The nation learned this week that Vice President Mike Pence and his wife, Karen, have had some unusually strict boundaries around their marriage.

That's something The Washington Post's Ashley Parker dug up in writing a profile of Karen Pence this week. As Parker tweeted on Wednesday, "Mike Pence never dines alone [with] a woman not his wife, nor does he attends events [with] alcohol, w/o her by his side."

Mike Pence never dines alone w a woman not his wife, nor does he attends events w alcohol, w/o her by his side. https://t.co/BxfS0JzbAc

This practice, of avoiding alone time with another woman, is what some Christians call the "Billy Graham Rule," after the famous evangelist. And the revelation that the vice president has practiced it made for a fiery (and important) debate about the function of gender in the halls of power.

Perhaps the rule is purely a couple's private decision for protecting their marriage, some said. But then, others countered, it could easily enable discrimination. After all, it was created by men, in a male-dominated profession. (And virtually all references to the rule refer to men, not women, practicing it.) And it's easier to practice in a profession that's male-dominated — like, for example, Washington politics. Were a woman to act similarly, it would probably be tougher, perhaps even impracticable, in a heavily male Congress or White House. Congress, after all, has about the same share of women right now as the clergy.

Fortunately, the Internet is hard at work debating all that, so we can get to something different here: the other rules that Graham set for his ministry.

Graham knew something about leadership; during his career, he was one of the most (if not the most) influential evangelists in America. Indeed, he has been close with presidents of both parties, and met with all the presidents from Truman to Obama (President Trump has met him, but before Trump was president). Trump won four-in-five evangelicals in November, but his actions have, to a remarkable degree, run counter to the strictures Graham set out, in part to keep his ministry running smoothly.

Let's dig into them:

At a 1948 meeting, Graham and his ministry team came up with what was called the Modesto Manifesto, a set of four guidelines (including the no-alone-time-with-women rule many evangelical men follow).

Here's an abridged rundown of the rules, as Graham described them in his autobiography (emphasis ours):

"The first point on our combined list was money. ... [T]here was little or no accountability for finances. In Modesto we determined to do all we could to avoid financial abuses and to downplay the offering and depend as much as possible on money raised by the local committee in advance.

"The second item on the list was the danger of sexual immorality. We all knew of evangelists who had fallen into immorality while separated from their families by travel. We pledged among ourselves to avoid any situation that would have even the appearance of compromise or suspicion. From that day on, I did not travel, meet or eat alone with a woman other than my wife. ...

"Our third concern was the tendency of many evangelists to carry on their work apart from the local church, even to criticize local pastors and churches openly and scathingly. We were convinced, however, that this was not only counterproductive but also wrong from the Bible's standpoint. ...

"The fourth and final issue was publicity. The tendency among some evangelists was to exaggerate their successes or to claim higher attendance numbers than they really had. ... In Modesto we committed ourselves to integrity in our publicity and our reporting."

Ironically, the current president's actions have at times quite brazenly run counter to these rules that Graham set out for himself, and that the vice president at least partially seems to follow closely.

That first guideline, about money, Graham described as being about "accountability."

Money and accountability is one area where the Trump White House has run into heavy criticism; all presidents since Nixon have either released their tax returns or summaries of those returns. Trump, however, has not. In addition, big questions still loom about the degree to which he has separated himself from his businesses, as well as how much those businesses benefit from his presidency.

On the sexuality rule, as many pointed out this week, Pence follows a rule designed to help men serve their God by avoiding temptation, while the president he serves has in the past spoken — quite explicitly — about embracing that temptation ("I'm automatically attracted to beautiful — I just start kissing them. It's like a magnet. Just kiss. ... Grab 'em by the pussy. You can do anything."). Trump later apologized for the remarks.

As far as Graham's third item, Trump has no "local churches" to speak of. Still, there are echoes here of the Republican "11th commandment," which is heavily associated with Ronald Reagan, whom the GOP has all but canonized. This week, Trump vowed to "fight" Freedom Caucus members.

And then there is the rule about inflating attendance numbers. The White House ran into trouble on this from Day One, literally.

Of course, the White House is not a religious organization and does not have to (and, plenty would argue, should not) follow the exact rules of an evangelical preacher.

However, much about Graham's rules isn't strictly biblical. Yes, the ideas are tied to the Christian idea that people are fundamentally sinful and therefore easily tempted. But many people who aren't Christians can still get behind ideas like financial accountability and honesty, for example.

After all, a lot of what Graham was aiming for here was not only keeping himself spiritually pure, but also keeping his organization from being derailed by scandal.

The degree to which Graham's sexuality rule could reinforce gender discrimination is troubling and important to examine. But that one bigger aim of Graham's rules — helping keep an office beyond reproach — could be applied to White Houses, too.

(Of course, even some presidents who relied on Graham for advice didn't always live up to his standards.)

For Graham, those close to him say that strategy paid off.

"In hindsight, Billy Graham and people close to him would say, 'Whatever inconvenience these practices might have involved, it was worth it to protect his reputation and the reputation of the ministry, and that for 60-some years, there was no hint of scandal surrounding him,'" said Mark DeMoss, Graham's spokesman. "So I think it paid good dividends.'"