Accessibility links
Trump May Have Met His Match With House GOP's Most Conservative Members The reality is that defeating an incumbent is hard work — it not only takes recruiting viable candidates but helping them with fundraising and campaign infrastructure. 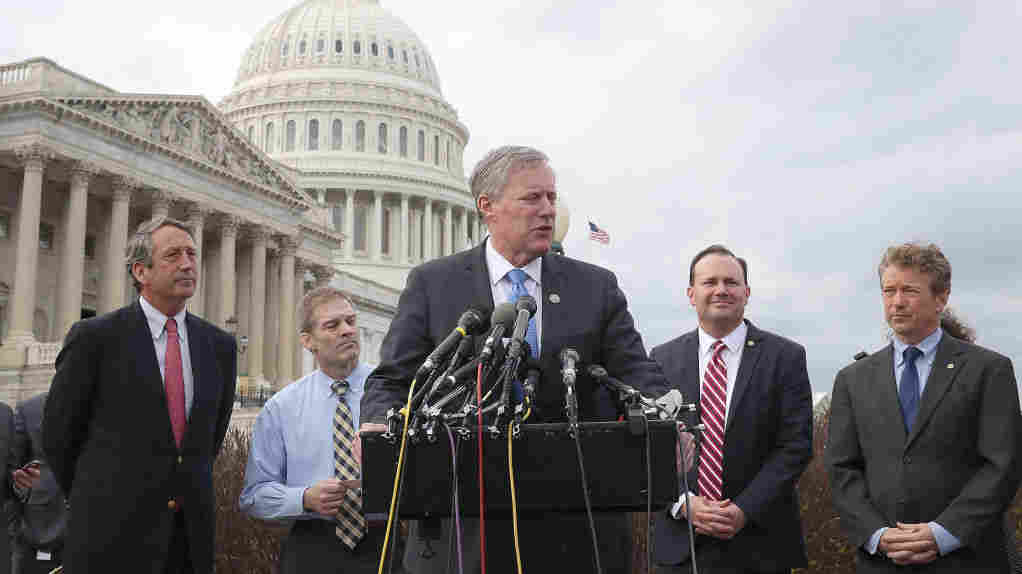 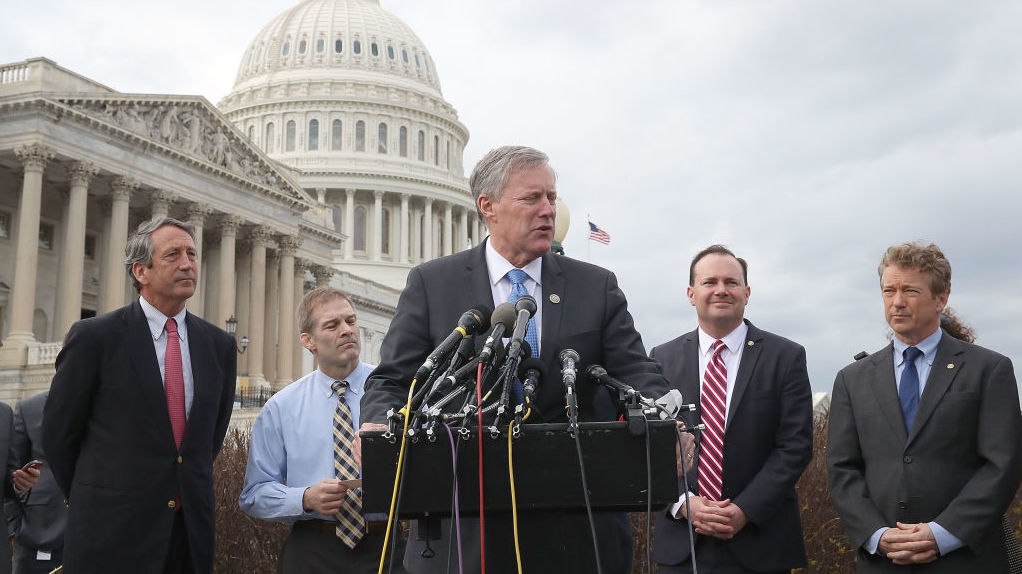 Since the Republican health care bill died recently, President Trump has been looking to shift blame for the early failure in his administration. Last week, he found an easy scapegoat — the conservative House Freedom Caucus, that had voiced reservations about the Affordable Care Act replacement plan from the outset.

In a series of tweets, the president raised the specter of even backing primary challengers against some of the caucus's members, and later began calling out the group's leaders by name.

But the not-so-veiled threats by the president are likely to have little impact in these conservative districts, where most members easily outperformed Trump and, instead, would have faced more viable primary threats from the right if they had backed the deeply unpopular Obamacare bill.

"The Freedom Caucus members all won big and they all have essentially very, very safe seats," said Elaine Kamarck, a senior fellow at the Brookings Institution's Governance Studies program, who has done research on congressional primaries. "And they would have faced hell if they hadn't voted against this because their primary electorates are driving this, and they are very conservative."

Throughout the recent debate over the GOP health care bill, many Freedom Caucus members stood up and said the bill was not what they or their constituents had in mind when they promised for seven years to repeal Obamacare. To them, it left too many of the problems with Affordable Care Act in place, including tax credits and subsidies and expanding Medicaid. There was a last-ditch effort from the White House to woo these conservative members to the president's side, promising to shift control over insurance requirements to cover "essential health benefits" to the states, but then that change caused some moderate House Republicans in danger in 2018 to threaten to abandon the bill. Ultimately, Trump and House Speaker Paul Ryan lacked enough votes from both GOP moderates and conservatives to be sure the bill would pass if Ryan put it on the House floor.

An analysis from Republican pollster Chris Wilson of WPA Research, who worked for Texas Sen. Ted Cruz's presidential campaign, found that support for the GOP bill, the American Health Care Act, was at very low levels in districts of Freedom Caucus members. "House Freedom Caucus members held the line, and the data show that is precisely what their constituents wanted," Wilson wrote in an analysis. A Quinnipiac University poll showed that the bill only had 17 percent support nationally.

Freedom Caucus members won their districts last November by bigger margins than Trump, too. An NPR analysis found that the roughly 30 members of the conservative caucus won reelection by an average of almost 37 points. Trump, however, carried their districts by about 26 points.

But as Trump's tweets indicate, the key to knocking off any of these members would lie in a primary. But for these lawmakers, running to their right is almost impossible — and that's the only way to defeat them. According to NPR's analysis, they won their primaries by an average of 77 points last year, and about half of them didn't even have a primary challenger.

In fact, the bigger threat for them was if they had supported the GOP bill. Conservative groups such as the Club for Growth and Heritage Action had planned to keynote the health care vote — meaning that if they'd supported the Trump-Ryan bill, their cumulative conservative score would have taken a hit on the groups' annual scorecard and given ammunition to a primary challenger. But, the groups promised they would have the backs of anyone who opposed the bill. Two Koch-backed groups, Americans For Prosperity and Freedom Partners, announced they planned to establish a seven-figure fund "to stand by principled lawmakers who keep their promise of fully repealing Obamacare."

"If somebody can get to the right of me in the primary, God bless him," Arizona Rep. Trent Franks told Roll Call.

Texas Rep. Louie Gohmert, a Trump ally, told the Dallas Morning News that if the president didn't stop with the friendly fire, they would stop coming to his defense too.

"If he weakens and hurts those who stood with him when our leadership was coming after him and abandoning him, we may not be around to help him during the future assaults," Gohmert said.

Michigan Rep. Justin Amash likened Trump's threats to taunts from a schoolyard bully, telling reporters that, "It's constructive in 5th grade. It may allow a child to get his way, but that's not how our government works."

There are reports and speculation that Trump and Vice President Pence could visit some of these Freedom Caucus districts over the upcoming recess to try to get back at them for not supporting the GOP health care bill. Such a move would not just be unprecedented by a sitting commander in chief — it would be politically unwise.

The reality is that defeating an incumbent is hard work — it not only takes recruiting viable candidates but helping them with fundraising and campaign infrastructure. Well-heeled outside groups have helped knock off lawmakers in the past, but that's usually been when they deem the lawmaker too liberal for a conservative district. Over the past two cycles, only five incumbents have lost their primaries; the numbers only typically spike in years after redistricting, like 2002 and 2012, when some lawmakers are grappling with radically different district lines or are forced into primaries with fellow incumbents because of reapportionment.

On top of the political reality of primaries, Trump is also looking at a House of Representatives that is very much in play in 2018, and becomes more so every day as his approval ratings fall. Spending what little — if any — political capital he has to defeat safe GOP members would be a suicide mission that would only give Democrats more ammunition during the midterms and further drain an already depleted base.

Ultimately, the political sin that Trump is claiming here of not signing onto his much-criticized bill is unlikely to be a negative with voters in these districts. Instead, it's only likely to help the House Freedom Caucus with voters — many of whom may only be more skeptical of Trump's conservative bona fides, even if they did vote for him, after his about-face on health care.

A Presidency Stalled And Sputtering

"I think it is, at this point, unproductive," Wilson, the GOP pollster, said of Trump backing primary challengers against Freedom Caucus members. "He would be far better off inviting them to the White House and crafting a piece of legislation that has a better chance of passage."

James Davis of Freedom Partners, one of the conservative groups that has pledged to help members who opposed the bill, also said he wanted to see more outreach from the White House over the issue to find a solution instead of striking out at members.

"We're going to stand by those folks, whether it's now or in the future," Davis said. "We are working together to try to find a solution."

The approach Trump has taken over the past week, by lashing out at the Freedom Caucus is, as NPR's Tamara Keith noted, straight out of his 1987 book, Trump: The Art of The Deal:

"Much as it pays to emphasize the positive, there are times when the only choice is confrontation. In most cases I'm very easy to get along with. I'm very good to people who are good to me. But when people treat me badly or unfairly or try to take advantage of me, my general attitude, all my life, has been to fight back very hard."

But, if Trump continues down a futile road of turning Freedom Caucus members who should be his allies into enemies by backing uphill primary challenges to them, it's the next line in that paragraph that may be the most predictive and foreboding:

"The risk is that you'll make a bad situation worse, and I certainly don't recommend this approach for everyone."

He goes on to say that "things usually work out for the best in the end," and that may have been true for Trump in business, when he was used to negotiating bilateral deals. But in a multilateral attack where he's overmatched by lawmakers whose support runs much deeper and stronger than his, the outcome likely won't be as positive.