Accessibility links
At Least 193 Killed In Colombian Avalanche Of Mud And Water At least 193 people were killed after floods tore through a small city in Colombia. President Juan Manuel Santos has declared a state of emergency.

At least 193 people were killed after floods tore through a small city in Colombia. President Juan Manuel Santos has declared a state of emergency.

Tragedy has struck the Colombian town of Mocoa, which is located near the Ecuadorian border. Over the weekend, intense rains triggered landslides and massive flooding that destroyed large sections of the city. The Colombian Red Cross says that more than 200 people have died, hundreds more have been injured, and there are still many, many missing. We go now to reporter John Otis is in Bogota.

John, good morning. Bring us up to date on this situation. What do we know so far?

JOHN OTIS, BYLINE: Well, Lulu, Mocoa is the capital of southern Putumayo state. You know, it's really just a small town of 60,000 people. It doesn't have much infrastructure. So as you can imagine, the place has really been overwhelmed. What's happened is that heavy rains caused the Mocoa River and two of its tributaries to overflow. And that brought massive walls of mud, water, rocks and boulders sweeping through the town. From aerial pictures, it looks - it kind of looks like the river was entirely redirected through the middle of town.

And all this happened after midnight on Friday, so most people were sleeping. They were caught off guard and unable to escape. Houses, cars and bridges were washed away. And 17 neighborhoods were partially destroyed. And the town hospital and morgue are overflowing. Among the victims is a policeman who was carried away by rushing water when he tried to save a 12-year-old girl from drowning. And then there's the case of the Mocoa mayor, who is a pastor - he's homeless because rocks and mud came into his house and filled it all the way up to the ceiling.

GARCIA-NAVARRO: Sounds like a horrific situation. How has the government responded?

OTIS: President Juan Manuel Santos flew into Mocoa to inspect the town. He sent in the army. The Red Cross is there. There are emergency workers searching for survivors. But one of the problems is that there's no airport in Mocoa, and the main road into the town's been partially washed out. Half of Putumayo state's without power, and the drinking water supply has been totally destroyed. Now there've been some reports of people looting stores for food and water.

GARCIA-NAVARRO: Just briefly - you know, we've heard a lot about flooding and landslides in Latin America recently. Peru's also had massive flooding. Do we know why this is happening?

OTIS: Well, Lulu, there's been a number of reasons. But when President Santos was in Mocoa, he flatly blamed climate change. He said that's led to heavier than normal rains in Colombia. But in addition, there's been a lot of deforestation in and around Mocoa by farmers, some of them growing coca, which is the raw material for cocaine. And a lot of the deforestation has happened in the watersheds. So when heavy rains hit, you get a lot of erosion and these massive mudslides and tragedies like what we're seeing now in Mocoa.

GARCIA-NAVARRO: John Otis from Bogota, thanks so much.

OTIS: Thanks a lot. 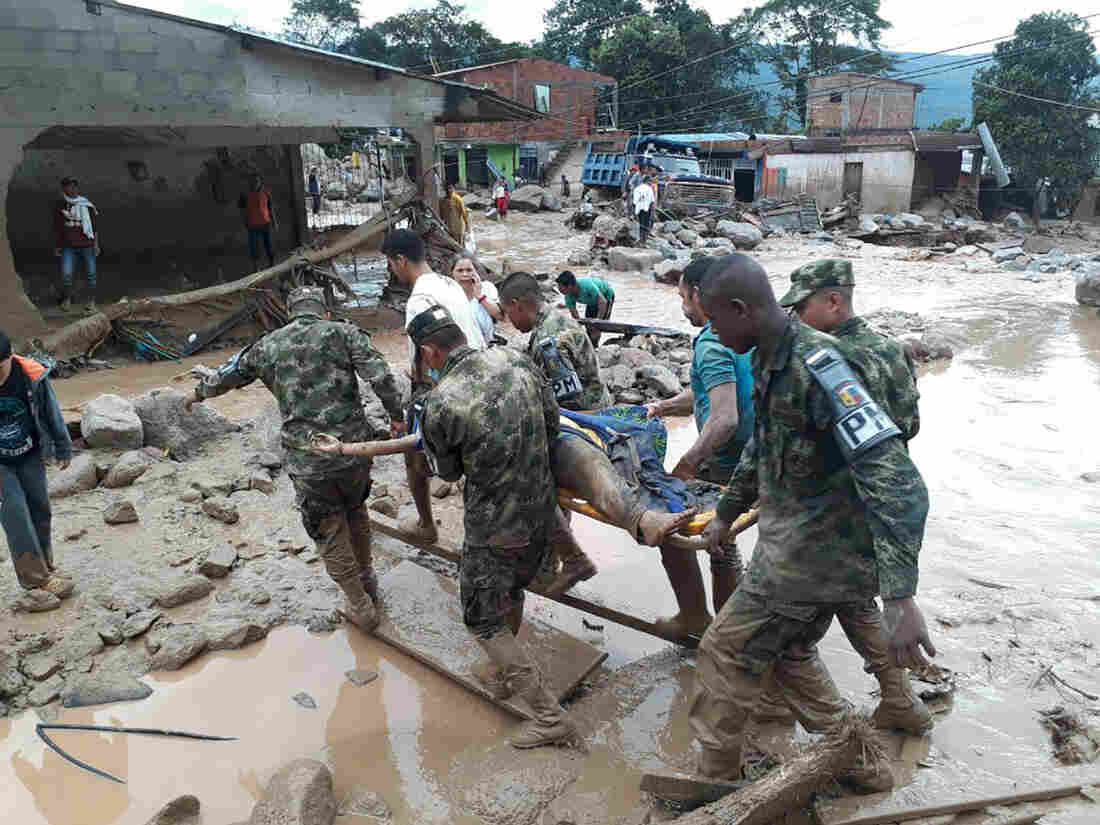 Soldiers carry a victim on a stretcher in Mocoa, Colombia, on Saturday, after an avalanche of mud and water from an overflowing river swept through the city as people slept. The incident triggered by intense rains left at least 125 people dead. Colombian National Army via AP hide caption 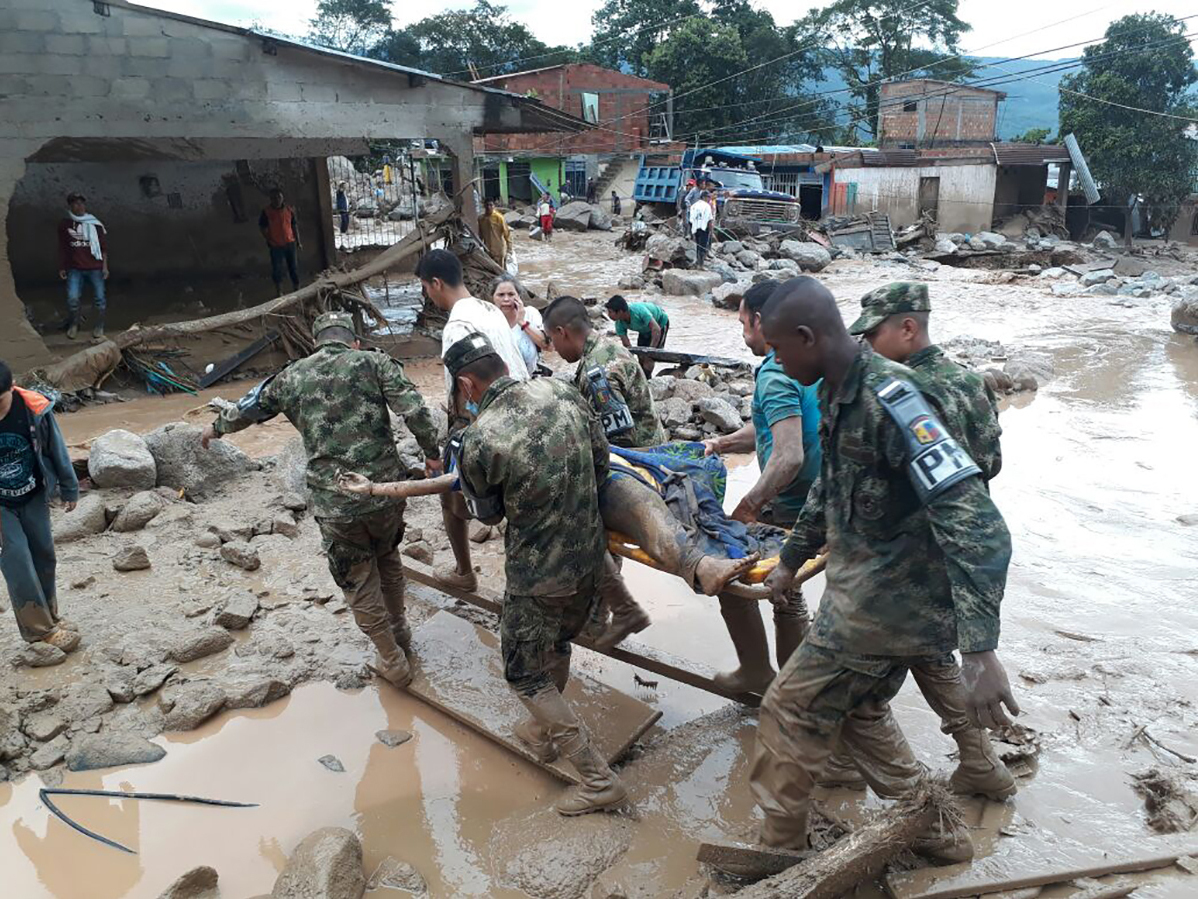 Soldiers carry a victim on a stretcher in Mocoa, Colombia, on Saturday, after an avalanche of mud and water from an overflowing river swept through the city as people slept. The incident triggered by intense rains left at least 125 people dead.

A sudden avalanche of mud and water tore through the Colombian city of Mocoa overnight Friday night, killing scores of people while they slept. At least 193 people were killed, according to President Juan Manuel Santos. The Colombian Red Cross reported Saturday that 220 people are missing, and 400 were injured in the disaster.

Mocoa is in the Putumayo province, along the country's southern border with Ecuador. The 40,000-person city sits between two mountains at the crux of two rivers that overflowed after intense rains, according to the Associated Press: "Muddy water and debris quickly surged through the city's streets, toppling homes, ripping trees from their roots, lifting cars and trucks and carrying them downstream."

President Santos visited the city on Saturday and declared a state of emergency, to mobilize rescue operations. "We don't know how many there are going to be," he said about the death toll. "We're still looking."

An alarm reportedly went off to alert residents but wasn't audible throughout the city. Witnesses told the AP that they felt buildings vibrate, and that many did not have enough time to retreat to roofs or higher ground.

The AP spoke with Herman Granados, an anesthesiologist at the local hospital, who had worked throughout the night on victims. He said the hospital didn't have enough blood to deal with the crisis, and they were running out of supplies. Some of the hospital workers had family among the missing.

"Under the mud," Granados said, "I am sure there are many more."

Colombia's mountainous landscape and informally constructed homes make landslides relatively common when there are heavy rains, according to Reuters.