Accessibility links
Senate Could Invoke 'Nuclear Option' On Gorsuch Nomination, Schumer And McConnell Won't Back Down A potentially historic and consequential week lies ahead in which Republicans stand ready to change the rules of the Senate to confirm Neil Gorsuch to the Supreme Court. 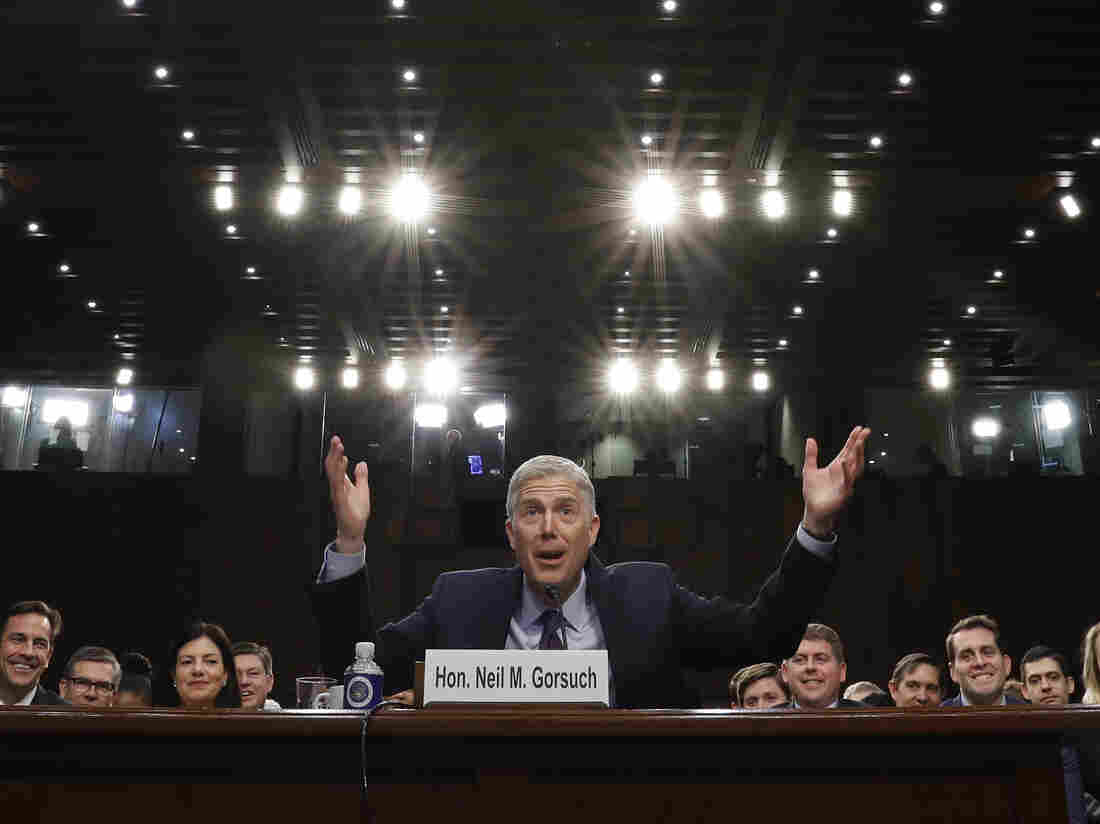 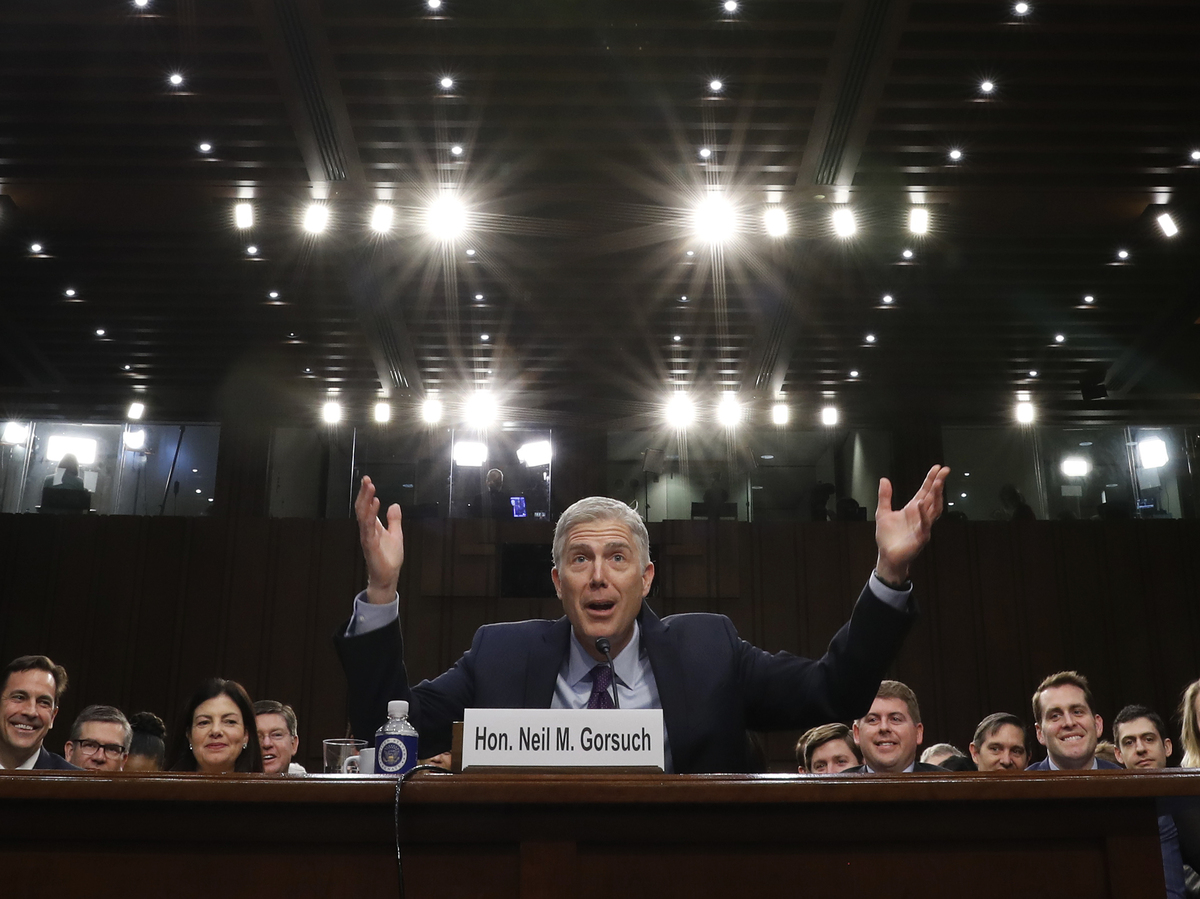 Supreme Court nominee Neil Gorsuch gestures as he speaks during his confirmation hearing before the Senate Judiciary Committee.

The U.S. Senate could make history this week, but no one is feeling particularly good about it.

"It is depressing; I'm very depressed," said Sen. John McCain, R-Ariz. "We're all arguing against it, but we don't know any other option."

The nomination of Neil Gorsuch to the Supreme Court and the GOP blockade against Merrick Garland before him are forcing another showdown over whether to invoke the "nuclear option" and change the rules of the Senate to make it easier for a president to get all of his nominations approved.

A Presidency Stalled And Sputtering

It's been dubbed the "nuclear option" because it threatens to further erode one of the defining institutional quirks of the Senate — the filibuster — as well as the culture of the chamber that sees itself as more bipartisan and statesmanlike than the House of Representatives.

The Senate already triggered the nuclear option in 2013 under Democratic control, when then-Majority Leader Harry Reid, D-Nev., on a party-line vote, set a new precedent to eliminate the ability to filibuster executive branch nominations and instead subject every nominee to a simple, 51-vote threshold for confirmation. Advocates then argued it was necessary to break through entrenched partisan warfare over President Obama's lower court and other executive branch nominations.

The 2013 precedent did not affect Supreme Court nominees because many Democrats who supported going nuclear at that time saw it as a bridge too far — the Supreme Court is a consequential, lifetime appointment that can span decades and shape the course of the entire nation.

But that could all change this Thursday.

"It is depressing, I'm very depressed...We're all arguing against it, but we don't know any other option."

Senate Majority Leader Mitch McConnell, R-Ky., has publicly promised to confirm Gorsuch on Friday no matter what, which means either eight Democrats need to side with 52 Republicans to clear the 60-vote hurdle to move forward with Gorsuch's nomination, or McConnell will invoke the nuclear option to lower that hurdle to 51 votes to make it happen.

McConnell can use the same procedural motions Reid invoked to overturn a ruling from the presiding officer in the Senate to lower the threshold — a simple up-or-down vote that will forever alter how the chamber operates going forward.

Senate Minority Leader Charles Schumer, D-N.Y., is leading the effort to filibuster Gorsuch. "The bottom line is very simple, and that is that (Gorsuch) did not acquit himself well at the hearings and did not impress our caucus in three ways," he told reporters last week.

Democrats are opposing Gorsuch because of his past judicial rulings, concern he would not be independent-minded about the Trump administration, and what they saw as evasive answers under questioning by the Judiciary Committee.

A large part of the Democratic opposition is also fueled by lingering anger in the Senate and among the party's base at McConnell's successful 2016 blockade against Garland that allowed President Trump to ultimately fill a seat that was vacated under President Obama.

"It's on (McConnell's) shoulders and only on his shoulders" if the Senate goes nuclear, Schumer said. "And let's not forget, he doesn't come to the court, so to speak, with clean hands. This is the man who broke 230 years of precedent and held Judge Garland up for a year and a half, and now is complaining."

Democrats are lining up behind Schumer. Just three centrist Democrats, Sens. Heidi Heitkamp of North Dakota, Joe Manchin of West Virginia and Joe Donnelly of Indiana, have announced they will not support a filibuster and will also vote for Gorsuch's confirmation.

They are also all Democrats up for re-election in 2018 in states that Trump won in 2016. There are 10 such senators in that position, but several others have said they will stick with the rest of their party and vote against Gorsuch. They include Sens. Claire McCaskill of Missouri, Bill Nelson of Florida and Bob Casey of Pennsylvania.

One such red state Democrat who was thought to possibly support Gorsuch is Sen. Jon Tester of Montana, but on Sunday night he announced that he will vote against Gorsuch. That may be a strong indication of where this is headed.

Manchin said his decision to vote for Gorsuch was made, in part, by concerns about what going nuclear would mean for the Senate over the long term.

"What's the place going to look like 10 years from now, you know? What goes around comes around. People that have been here a long time know we're going down the wrong path here," Manchin told reporters last week, arguing that eroding the filibuster will make the Senate more reactive and partisan, like the House. "The most unique political body in the world, meaning the United States Senate, will be no more than a six-year term in the House, and I don't think anyone will want to be here with that."

While few senators are enthusiastic about the prospect of going nuclear this week, an increasing number of advocates, mostly Democrats, favor scrapping the filibuster for nominations — and even potentially rethinking how it's used to block legislation. Neither the 2013 nuclear trigger nor what could happen this week affect the ability to block legislation that falls short of 60 votes.

"I'm a believer that we should change the rules of the Senate," said Sen. Chris Murphy, D-Conn. "I don't think we should do it in the context of a particular legislative or confirmation fight, but I think we should stand back and have a discussion about whether we want the filibuster to be used in the way it historically has been."

But step-back, deliberative discussion was the old Senate. This week, the country may usher in a new Senate, and with it, a new chapter in how the nation is governed.