Accessibility links
Democrats Have The Votes To Filibuster Gorsuch And Force 'Nuclear' Senate Showdown Forty-one Democrats have committed to support a filibuster on the nomination of Neil Gorsuch, which means the vote will fall short of a 60-vote threshold, likely forcing a rules change by Republicans. 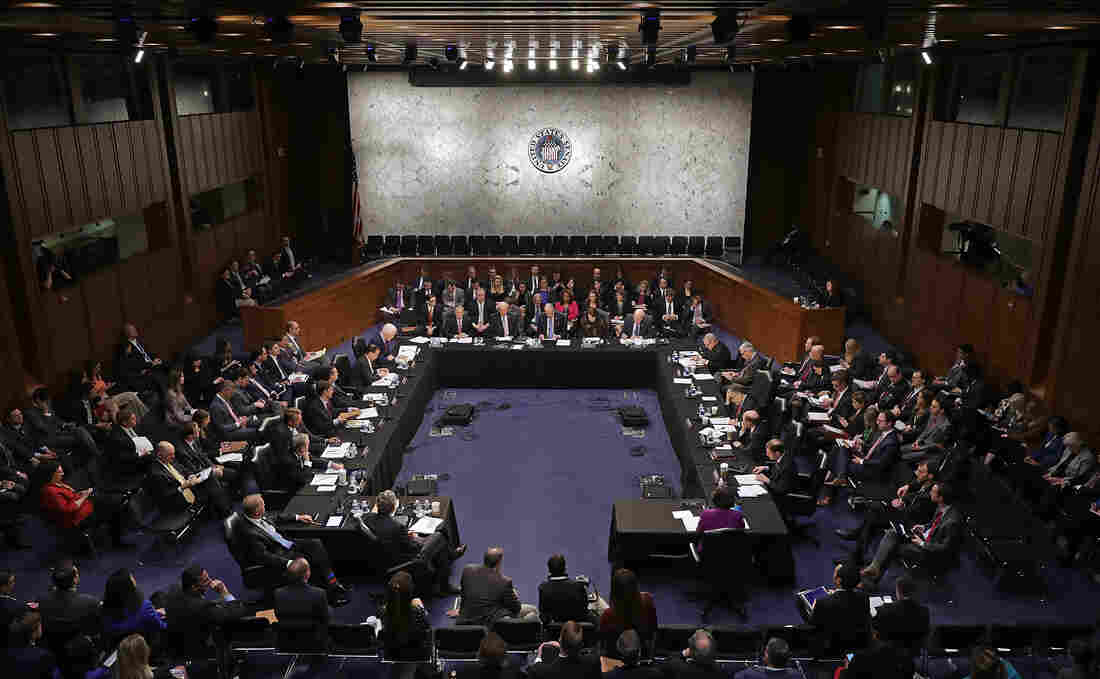 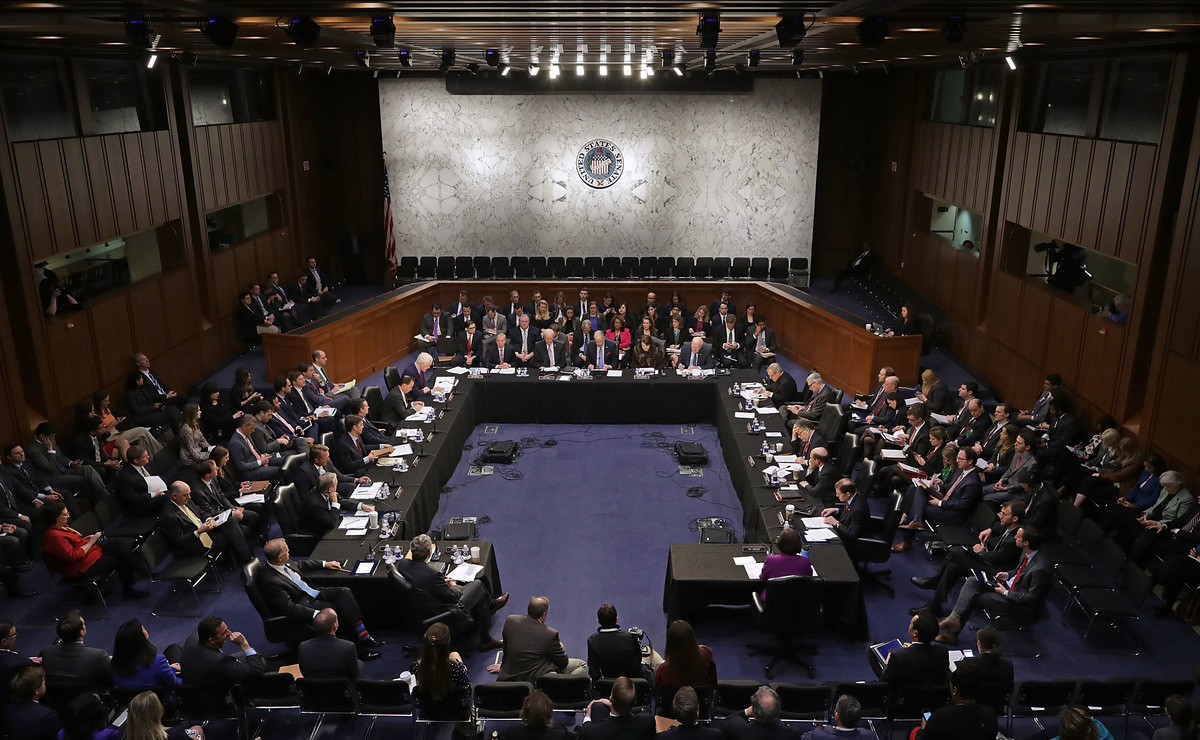 Members of the Senate Judiciary Committee meet to debate and vote on Judge Neil Gorsuch's nomination to the Supreme Court on Monday.

Forty-one Democratic senators have now publicly announced that they will vote against ending debate this week on the nomination of Judge Neil Gorsuch to the U.S. Supreme Court. That means Republicans cannot at this time clear the 60-vote threshold needed to proceed to an up-or-down vote on the nomination. It also sets up an historic vote to end the Senate's filibuster rule for Supreme Court nominees.

"If we have to, we will change the rules," Republican Sen. Lindsey Graham of South Carolina said Monday as the Senate Judiciary Committee voted along party lines to send the nomination to the Senate floor.

Graham's comment came after two senior Democrats on the committee, Sen. Dianne Feinstein of California and Sen. Patrick Leahy of Vermont, said they'd vote no on cloture for Gorsuch. They were seen as Senate traditionalists who may have voted yes, at least for the preliminary vote, in order to avoid what's long been known as "the nuclear option."

Sen. Mark Warner of Virginia and Sen. Chris Coons of Delaware also announced on Monday that they would oppose cutting off debate on the Gorsuch nomination.

With Democrats now able to hold up the Gorsuch nomination indefinitely under existing Senate rules, Republicans say they plan to trigger the so-called "nuclear option" this week. In a complicated set of parliamentary maneuvers, it would take only a majority of the Senate to abandon the 60-vote filibuster rule — and with a 52-48 Republican Senate majority, the votes are there to do that.

With that result all but certain at the Judiciary Committee on Monday, there was a sense of sadness that a way of life — indeed, a way of governance — was on the verge of ending.

Twenty-five years of escalating tit-for-tat politics over judicial nominations have finally reached the point of explosion, and in a sign of the times, neither side seems willing to step back from the brink.

Republicans said that the Gorsuch nomination marks the first partisan filibuster in the nation's history, while Democrats pointed to the unprecedented blockade of President Obama's Supreme Court nominee Merrick Garland, noting that the refusal to even consider the nomination for nearly a year was itself a form of partisan filibuster.

Democrat Leahy, the dean of the Senate, with 42 years of service, has been privately ambivalent about the strategy of forcing the filibuster issue over Gorsuch, according to friends and colleagues. He has pointed out that the balance of the Supreme Court will be at stake if there is another vacancy in the next three-plus years, and if the filibuster is eliminated now, there will be no such tool to fight a potentially more radical nominee next time.

Leahy, however, indicated on Monday that Republican Senate leader Mitch McConnell's promise "to use whatever tactic is necessary to get his way, even if that means forever damaging the United States Senate" had caused him to view the current situation differently. "I cannot vote solely to protect an institution when the rights of hard-working Americans are at risk because I fear that the Senate I would be defending no longer exists."

Assistant Democratic leader Richard Durbin echoed that sentiment, lamenting, "It breaks my heart to find us in this position."

Republican Sen. Graham said he hated the fact that Republicans are being forced to change the rules. But he noted that until the Gorsuch nomination, filibusters of Supreme Court nominees have been rare, and almost always unsuccessful.

Moreover, he warned that the Democrats, by forcing the issue on a supremely well-qualified and highly reputed nominee, are setting in motion changes with real-world consequences. "We're headed to a world where you don't need one person from" the opposition party "to pick a judge." That means, he said, that "judges are going to be more ideological, not less." And it means "that every Senate seat is going to be a referendum on the Supreme Court."

At the same time, there is no doubt that while Judge Gorsuch delivered a smooth and practiced performance during two long days of testimony, he was considerably less responsive than most previous nominees, refusing even to say whether he would sustain well-established and accepted precedents. It was a performance that only fueled Democratic doubts about his nomination.

With a "nuclear" showdown now apparently inevitable, here's how the rest of the week will likely play out:

There's a two-step process on the Senate floor. The key is a procedural vote expected Thursday to end debate on the nomination. That's known as a "cloture vote" and with at least 41 Democrats voting no, the motion to proceed to a final vote will fail.

But at that point, Senate Majority Leader Mitch McConnell would be expected to change the rules that govern the Senate through a series of procedural votes. In the past, enough senators in the majority party have been leery of this rules change to avoid it. But it's clear McConnell would have the votes he needs to invoke the "nuclear option," and while he has not specifically said he will do so, his declarative comments about getting Gorsuch confirmed this week make it clear that McConnell is prepared to make this move.

If McConnell were to do so, a second cloture vote would then happen, but at this point, only 51 votes would be needed to end debate and move to a final vote. These are the rules that governed President Trump's Cabinet confirmations, since Democrats changed cloture rules in 2013 for everything but the Supreme Court.

The Senate would then proceed to 30 hours of debate, which is expected to go overnight Thursday into Friday. There will then be a final vote to confirm Gorsuch on Friday, which — after the rules change — would require only a simple majority of 51 senators.

Gorsuch would be assured confirmation at that point, as he is expected to earn support from all 52 Republicans, as well as at least three Democrats — Sen. Joe Manchin of West Virginia; Sen. Heidi Heitkamp of North Dakota; and Sen. Joe Donnelly of Indiana.