Accessibility links
Change To President Trump's Trust Lets Him Tap Business Profits Trump's lawyer said the trust isolates him from his business interests. A document from the trust says he can take out money whenever he wants. 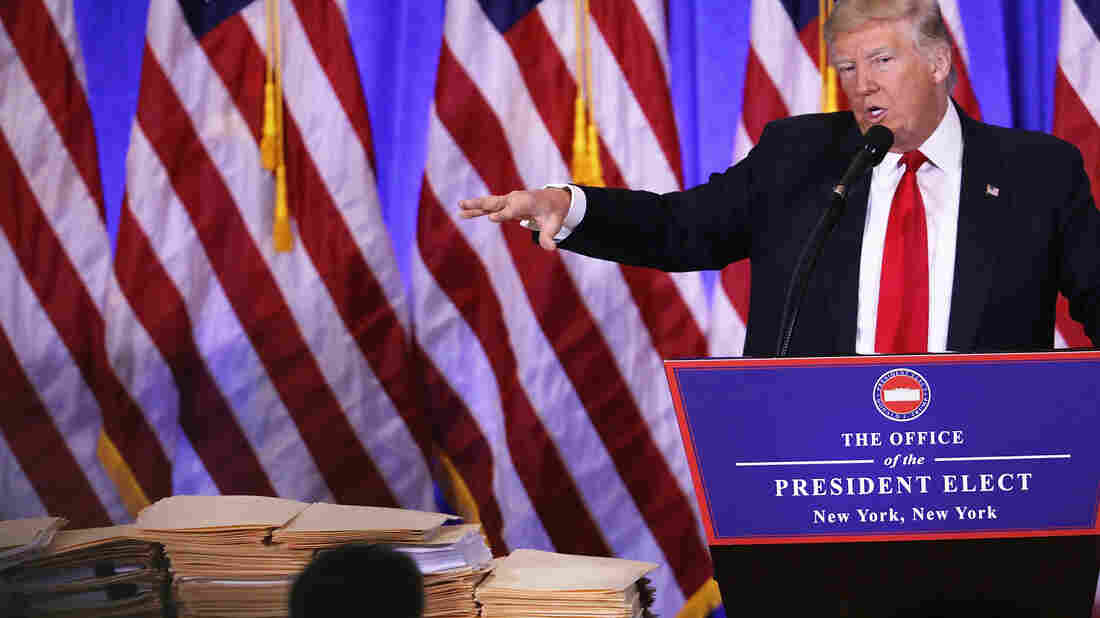 At a Jan. 11 news conference at Trump Tower on in New York City, President-elect Trump gestures at a stack of folders that he said contained documentation separating him from his businesses. That revocable trust was modified about a month later to let Trump withdraw from it at any time, ProPublica reports. Spencer Platt/Getty Images hide caption 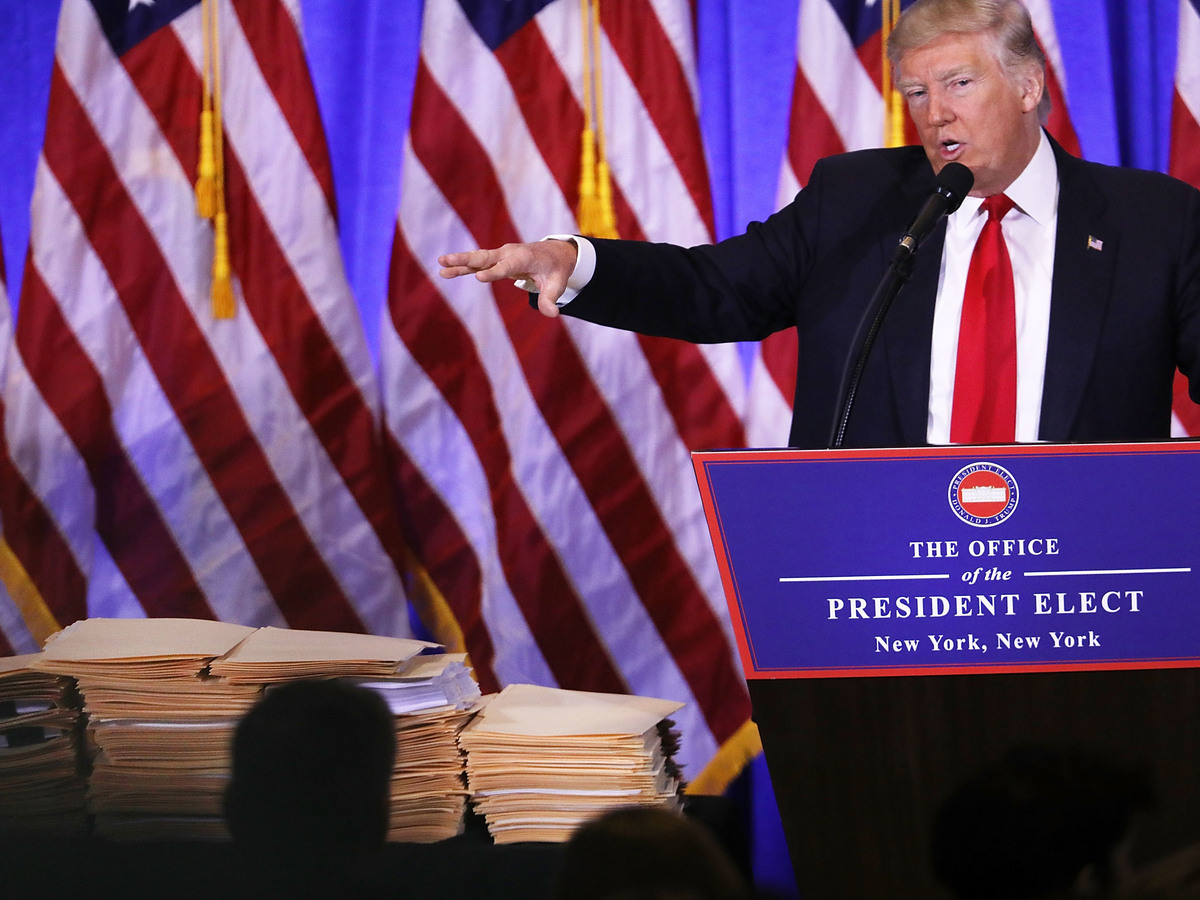 At a Jan. 11 news conference at Trump Tower on in New York City, President-elect Trump gestures at a stack of folders that he said contained documentation separating him from his businesses. That revocable trust was modified about a month later to let Trump withdraw from it at any time, ProPublica reports.

With an oversized check for $78,333, written to the National Park Service, White House press secretary Sean Spicer on Monday took the first step in fulfilling President Trump's pledge to give away his presidential salary.

Spicer said that the sum equaled Trump's salary for the first quarter of 2017, and that similar charitable contributions will be made each quarter.

But a five-figure check is pocket change compared to the wealth of Trump's business empire — businesses now held by the Donald J. Trump Revocable Trust, and a newly released document opens new holes in the ethics wall between the president and that wealth.

Trump lawyer Sheri Dillon said, at a January press conference, that the revocable trust would prevent conflicts of interest.

"President Trump wants there to be no doubt in the minds of the American public that he is completely isolating himself from his business interests," she said.

This afternoon, however, after Spicer brought out the big check, he had to fend off questions as to just how isolated from the Trump empire the president is.

He said he didn't know of any changes in the trust since January. "I'm not aware there was any change," he said. "Just because a left-wing blog makes the point of something changing doesn't mean it actually happened."

It wasn't a left-wing blog, but rather Pro Publica — a nonpartisan, nonprofit investigative journalism outfit — that first reported the change. A document dated Feb. 17 lets Trump draw out profits and principal from his businesses.

It says the trustees "shall distribute" funds to Trump at his request. It also requires them to send him money when appropriate and for "his maintenance, support or uninsured medical expenses."

Essentially, the president can take money from his businesses whenever he wants.

Spicer dismissed a question of whether Trump already has done so, saying, "The idea that the president is withdrawing money at some point is exactly the purpose of why the trust — a trust — is set up regardless of the individual."

But the purpose of presidential trusts has been to avoid conflicts of interest.

The new document also sheds new light on how the trust works. It's run by two trustees, Donald Trump Jr. and an executive of the Trump Organization, who cannot give the president reports on the trust's finances. But Trump's second son, Eric, can do that as chair of the trust's advisory board, and told Forbes magazine last month that he plans to give his father big-picture financial briefings every quarter or so.

Before Trump, recent presidents sold their assets or put them into a blind trust
when they took office.

"This is a ploy, okay?" said Kathleen Clark, a professor of law and ethics at Washington University in St Louis. "It's a public relations ploy to give people the impression that Trump has done something meaningful about the massive conflicts of interest he faces."

Those conflicts center mainly around his hotels and brands overseas, U.S. environmental laws that affect his golf courses, and his Washington, D.C., hotel.