Accessibility links
Book Review: 'What It Means When A Man Falls From The Sky,' By Lesley Nneka Arimah Lesley Nneka Arimah's remarkable debut collection is both cohesive and varied at the same time. Grounded both in the U.S. and Nigeria, it's full of sly humor, genuine emotion and occasional horror. 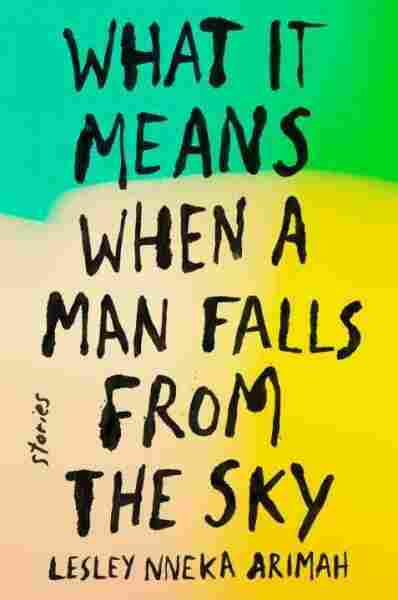 What It Means When a Man Falls from the Sky

The first short story in a collection functions the same way the first track on an album does — it sets the tone for what's to come, and works as a de facto introduction, displaying the range of tools the creator has decided to work with. That's not to say authors never deviate from the tone of the initial story; they usually do, and when they know what they're doing, the effect can be bracing, even shocking.

Lesley Nneka Arimah begins her remarkable debut collection, What It Means When a Man Falls From the Sky, with a stunner of a story. "The Future Looks Good" opens with Ezinma, a young woman in Nigeria, about to unlock a door. The rest of the story details "what came behind her" — a mother and father who came of age during the Nigerian civil war, an older sister who's stubborn and beautiful. (Ezinma herself is "pretty, yes, but in that manageable way that causes little offense.")

It's a very short, very beautiful story that ends with a shock — the final sentence hits the reader hard, and it's almost impossible to resist the urge to read the story again immediately. Of all of Arimah's considerable skills, this might be her greatest: She crafts stories that reward rereading, not because they're unclear or confusing, but because it's so tempting to revisit each exquisite sentence, each uniquely beautiful description.

That's the case with the heartbreaking "Light," which, like most of the stories in the collection, focuses on the sometimes fraught relationships between parents and children. "When Enebeli Okwara sent his girl out in the world," the story begins, "he did not know what the world did to daughters. He did not know how quickly it would wick the dew off her, how she would be returned to him hollowed out, relieved of her better parts."

It's a truly wonderful debut by a young author who seems certain to have a very bright literary future ahead of her.

It's a magnificent opening, and it just gets better from there. The story focuses on Enebeli and his daughter, who live together in Nigeria — the girl's mother is studying abroad in the United States. The living arrangement isn't sustainable, of course, and Enebeli is forced to reckon with the possibility of losing his beloved little girl. "[S]he is his brightest ember and he would not have her dimmed," Arimah writes, in an achingly beautiful sentence. It's a painfully sad story, and it's also a flawless one.

The parent-child relationship is also the theme of "Wild," about a recent high school graduate in America ordered by her mother to spend her summer before college with her aunt in Lagos. Ada had hoped to while away her vacation at home, but her mother, aware of her daughter's experimentation with drugs and her "undeserved reputation as a bit of a ho," refuses to budge.

The story showcases Arimah's gift for sly humor that doesn't cheapen the genuine emotions of her characters. Ada's visit to Nigeria isn't what she expected, exactly, but she learns to bond, awkwardly at first, with her cousin Chinyere and Chinyere's illegitimate child. It's a naturalistic story with no sudden epiphanies, and it's a perfectly understated look at how relatives navigate the bonds that make them a family.

Arimah employs both humor and horror in "What Is a Volcano?," a fable about a feud between the goddess of rivers and the god of ants. The fight is initially one-sided — Ant is upset that one of River's streams destroyed an anthill he especially liked. Ant's complaints to the other gods fall on deaf ears "for Ant was the most minor of the gods, hardly more than a spirit, and who even knew there was a god of ants, did you?"

It doesn't take long for the story to get darker. River doesn't take her rival seriously, until he kidnaps her twin daughters as an act of revenge. "No one asked Ant what he thought of River, but someone should have known that you do not take small things from small men," Arimah writes — a perfectly structured sentence that manages to be funny, horrifying and accurate at the same time.

Arimah's collection somehow manages to be both cohesive and varied at the same time. None of the stories resemble one another, exactly, but they manage to form a book united not only by theme and by setting (the stories mostly take place in Nigeria and the U.S.), but by Arimah's electrifying, defiantly original writing. It's a truly wonderful debut by a young author who seems certain to have a very bright literary future ahead of her.