Accessibility links
Some VAs Are Dropping Veteran Caregivers From Their Rolls Veterans Affairs has a program to pay family members who care for veterans with disabilities. Several caregivers say they have been dropped without explanation; the VA says it is not cutting back. 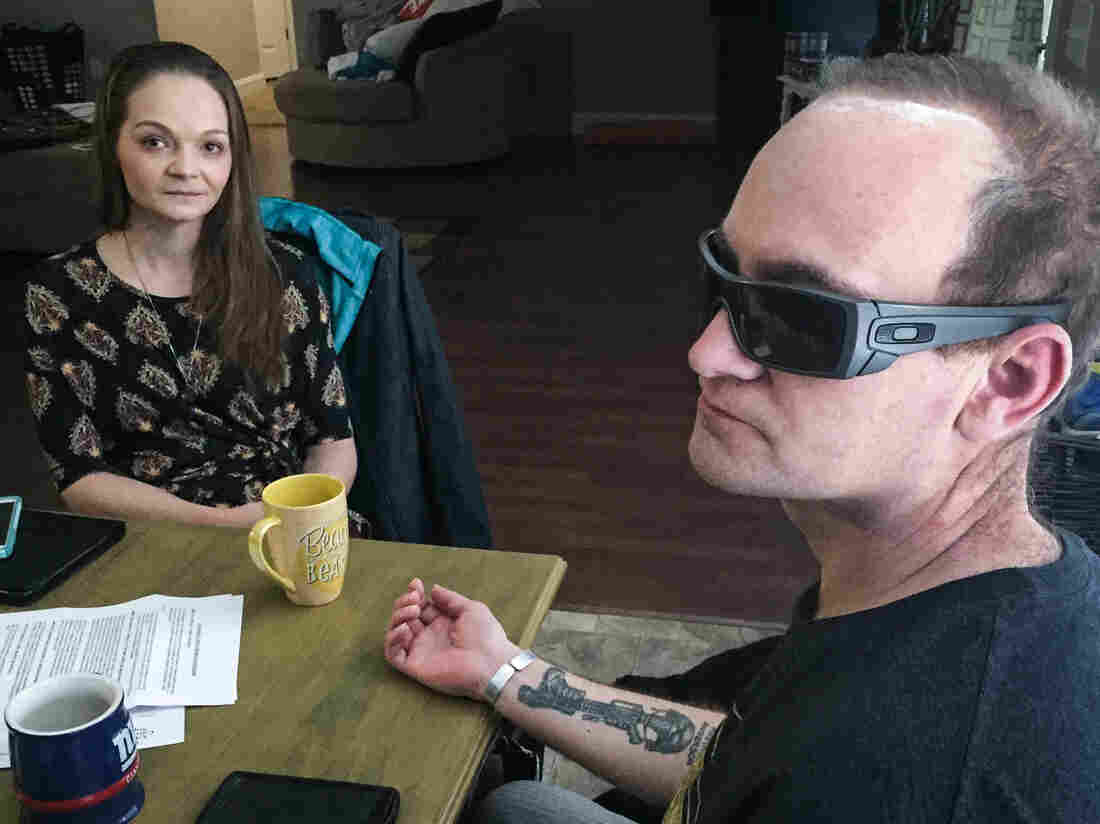 Alishia Graham had been part of a Veterans Affairs program as a caregiver for her husband, Jim. The couple lives in Jacksonville, N.C. Jim's tattoo commemorates his best friend, who was killed in 2006 by the mortar blast that also left Jim with a brain injury. Quil Lawrence /NPR hide caption 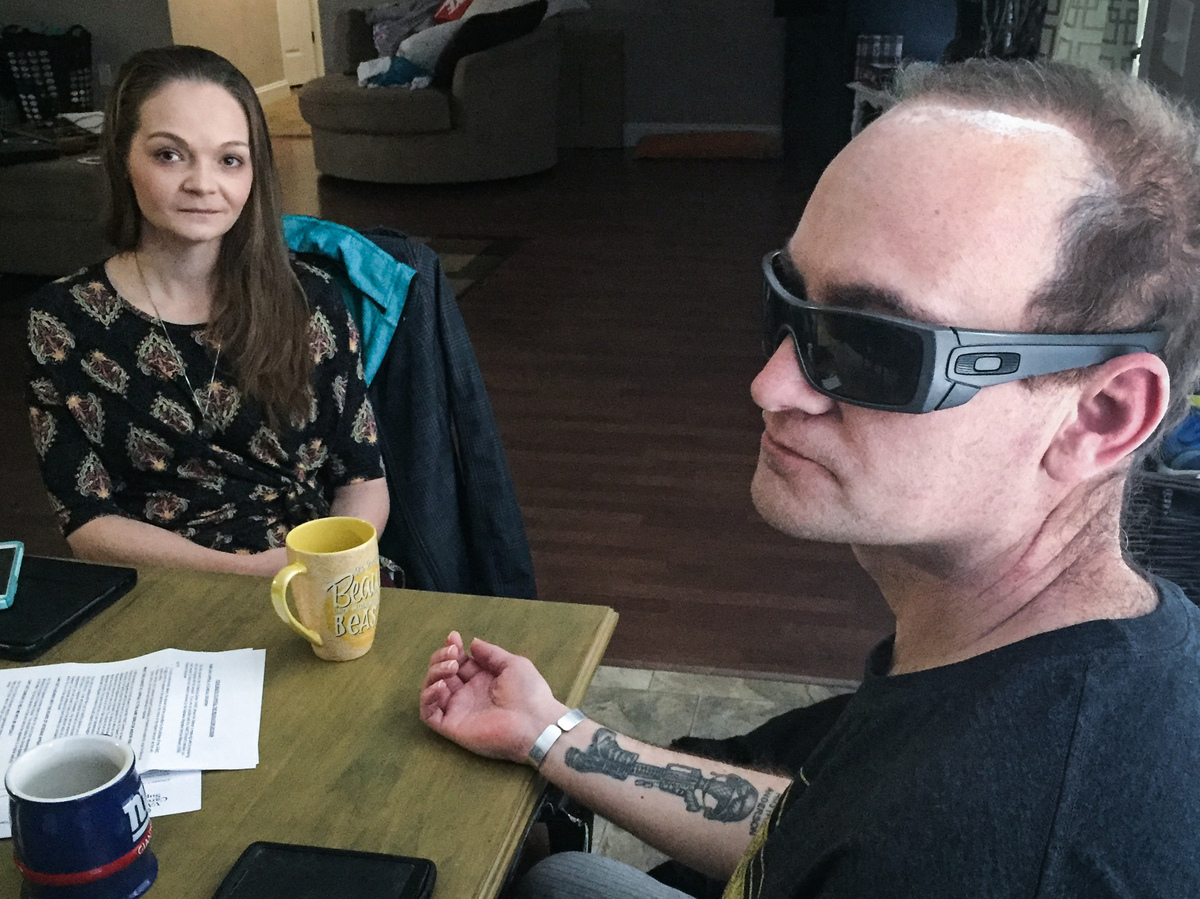 Alishia Graham had been part of a Veterans Affairs program as a caregiver for her husband, Jim. The couple lives in Jacksonville, N.C. Jim's tattoo commemorates his best friend, who was killed in 2006 by the mortar blast that also left Jim with a brain injury.

By the time they cut her from the program, Alishia Graham was angry, but not surprised. Her postman delivered the news in February.

"The letter was sitting at the top — and my stomach dropped because I knew what it was," she says.

The letter from the Department of Veterans Affairs informed Graham that her husband Jim, who sustained a brain injury on his third deployment to Iraq, no longer qualified for a caregiver to help with his daily life.

The VA's comprehensive caregiver support program pays a stipend to family members of veterans with disabilities, often wives who have had to leave their own careers to help their veteran with daily living.

At its outset in 2011, families of veterans overwhelmed the VA with applications to become official caregivers. A program designed for 4- to 5,000 has now grown to nearly 23,000 approved caregivers. Alishia Graham had been on the program for six years, but she'd been hearing rumors from around the country of veterans getting dropped without experiencing improvements in their disability.

"I was watching as all these caregivers were going up to their re-assessment. And one by one ... they were dropped," says Graham.

The VA denies any cuts to the size or funding of the caregiver program.

"The program is not cutting back in any way," says Meg Kabat, director of the VA Caregiver Support Program. "We've been able to expand the number of caregiver support coordinators and really continue to monitor that. We also train our staff on a regular basis."

But the VA is infamous for lacking consistency from station to station. And while the program has added 6,300 caregivers since 2014, according to VA data, NPR discovered that 32 out of 140 VA medical centers were cutting their programs during the same period — some drastically.

That included the VA in Fayetteville, N.C., which used to send Alishia Graham a monthly stipend of about $2,000 and offer her health insurance, respite and support.

Fayetteville cut more than half of its caregivers, dropping 314 families from the rolls between May 2014 and February 2017. And while data from the VA in Washington showed seven staff at Fayetteville were coordinating caregivers (a ratio of 37/1), the Fayetteville VA shows only two staff are doing that job, meaning that each coordinator is actually overseeing more than 125 veterans.

Graham's husband, Jim, was a Navy corpsman — a combat medic — for 13 years. In December 2006, on his third tour in Iraq, a mortar blast killed his best friend. Jim Graham was standing nearby and suffered a brain injury, as well as debilitating post-traumatic stress disorder.

The brain injury left him forgetful and in persistent pain for nearly 11 years.

"I've had a headache ever since I got hurt," says Jim, who wears dark Terminator-like sunglasses indoors, even with the blinds drawn, to prevent triggering an even worse pain.

"I get migraines on top of it. When I get one it lasts for days, months. If I'm someway able to get rid of the migraine, I'm lucky to get a week off before another one hits me," he says.

It's hard to separate which condition causes what symptom, but Jim's PTSD is probably what gives him anxiety about breaking his daily routine, about leaving the house, or about getting personal care from anyone outside his family. Alishia was studying to become a nurse when Jim got hit. She hasn't been able to work outside the house since then, because Jim needs help with everything from cooking to bathing — mostly just reminders not to let things burn on the stove, or help to get in or out of the shower.

That made the caregiver program a great fit for them, and VA rated Jim at the highest tier of need, which meant VA paid Alishia a stipend of nearly $2,000 per month. The stipend is based on 75 percent of what a professional caregiver would make for 40 hours a week in their town of Jacksonville, N.C. Jim says it's much better care than a stranger would give him. Alishia says 40 hours a week isn't the half of it.

NPR spoke with 10 couples who'd been cut from the program even though the husbands' condition hadn't improved.

The Portland, Ore., VA cut 66 percent of its caregivers in three years. Seattle cut 49 percent; the South Texas VA cut 48 percent; and Charleston, S.C., went from 197 caregivers in 2014 to just 11 in February of 2017 — a 94 percent reduction. The Charleston VA told NPR some of those vets improved and didn't need the program, and said that others probably never should have qualified at the start.

Congress and veterans organizations are aware of the problem, says Adrian Atizado of DAV, an advocacy nonprofit for veterans.

"We don't have a good idea about how many caregivers are in the same situation we're talking about. ... We know some have appealed, but we don't have enough reliable information, which we need," says Atizado.

He says the VA is promising to get better data and to look into the way clinical decisions about these veterans are made.

Atizado adds that the program is a great first step toward recognizing the millions of family members, doing billions of dollars' worth of work the VA might otherwise have to pay for, taking care of America's veterans. For the moment, however, caregivers like Alishia Graham are not feeling that recognition and support.

Alishia says their financial situation is not exactly dire, though. She says made sure to never live paycheck to paycheck, and that Jim still has a pretty high disability check from VA. Plus, Jim hates leaving the house, she says, so it's not like they were saving up for a big vacation.

But Jim says the problem is more about Alishia's hard work no longer being recognized.

"It's insulting. Cause I know how much she does do. And how much help I do need with everything. I gave everything I have to what I was doing. Always did. To not get back the same or equivalent to I gave up is a slap to the face, basically," he says.

The Fayetteville VA told NPR that Jim is no longer clinically eligible for the program, and that the Grahams are welcome to appeal. The VA also says it "can't thank Caregivers enough for the vital role they play in helping Veterans recover from injury and illness."