Accessibility links
Rich, Colorful 'Afar' Reimagines The Magical Girl Leila del Duca and Kit Seaton's new novel follows a young girl in a richly-imagined North Africa-flavored fantasy world, who discovers she has the power to dream herself into different bodies. 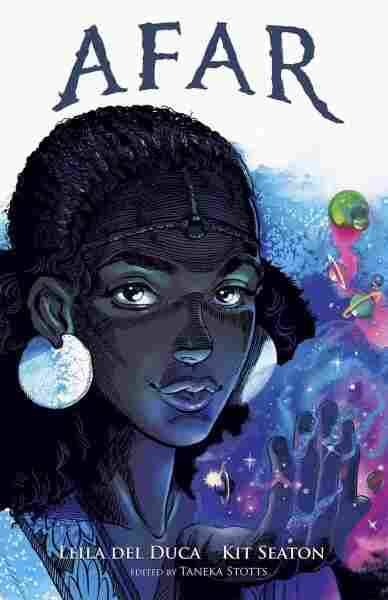 There are a lot of magical girls in both comics and young adult fiction, but the heroine of Leila del Duca's graphic novel Afar is different from all of them. Boetema is far more down-to-earth than the sprites who populate "magical girl"-themed Japanese manga, and her gift is more cryptic than those of such recent YA heroines as the winged Ava in 2014's The Strange and Beautiful Sorrows of Ava Lavender and Sarah Raughley's Effigies in last year's Fate of Flames. The ambiguous nature of Boetema's ability, and the strangely diffuse quality of her whole story, indicate that del Duca has a subtler project afoot than simply inspiring girls to dream of mystical triumphs.

In fact, for much of Afar Boetema's gift doesn't seem to propel the story or make much difference to her own fate. She has the ability — sometimes a compulsion — to dream herself temporarily into the bodies of different creatures all over the universe. When she sleeps, Boetema finds herself inhabiting all sorts of strange and wonderful beings, gorgeously imagined by Kit Seaton. She becomes a fishy humanoid with webbed appendages, a lizard-headed man, a giant creature with a scorpion tail and a four-eyed, four-eared, eight-legged leopardlike beast. Nobody in her vaguely North African home society seems aware that abilities like hers exist, so she's at a loss for much of the book. It's only when she meets a friendly buglike alien that she learns the name for her gift: She's an astral projector, or "universal spirit traveler."

Even as she struggles to make sense of her ability, Boetema faces plenty of uncertainties in her everyday world. Her well-meaning but flaky parents can't manage to hold down jobs, so they drag Boetema and her brother Inotu from town to town. Finally, they all but abandon the two teenagers, at which point Inotu manages to get on the bad side of a shady warrior. He and Boetema flee into the desert, hoping to reach Yopan, "the city of riches and abundance" — or, failing that, to find anyplace where they can settle down and scrape a living.

[Del Duca] determinedly keeps her characters down-to-earth and her story small — universe-spanning though it is. ... And it works.

Boetema and Inotu's world is vividly realized. Seaton makes their arid land rich and detailed, and the alien worlds Boetema encounters on her spirit walks are as brilliantly colored and exotic as could be imagined. Boetema skillfully musters a wide-ranging knowledge of nature to find a way through the desert and keep herself and her brother alive. Inotu evolves from an impulsive boy into a supportive, dedicated helper. And about halfway through the book, Boetema's random nighttime projections coalesce into a parallel storyline when she becomes Lindu, a scarlet-skinned girl in a technologically advanced world. Here she has a friend, and possibly more, in a young man named Talo — who's aware of the existence of spirit travelers and helps her understand her gift.

The Lindu storyline hardly winds up with a bang, though. It doesn't even have any particular effect on Boetema's waking journey, and her and Inotu's fates are open-ended at the end of the book. It's tempting to keep looking for a big, sweeping theme driving at least one of the main storylines, or, for that matter, underlying any of Boetema's spirit walks. But del Duca's goals for this book seem both narrower and deeper than those of other "magical girl" writers. She determinedly keeps her characters down-to-earth and her story small — universe-spanning though it is. There's no grandiose escapism here for Boetema or the reader.

And it works. The truths Boetema learns through her travels are humble, but they're satisfying. The beings she encounters on the spirit plane are a lot like the ones back in her "real" world, with similar conflicts and challenges. Though Boetema grows and changes, she doesn't undergo any miraculous reinvention or even harness her powers for good. She simply adapts, acquiring a deeper understanding of herself and those around her. That, del Duca seems to say, is a perfectly satisfactory achievement for any girl — even a magical one.