Accessibility links
Trump Can't Bring Back All Those Jobs From China. Here's What He Can Do. Massive tariffs won't help. In fact, one of the most helpful policies for putting manufacturers back to work has nothing to do with Chinese President Xi Jinping. 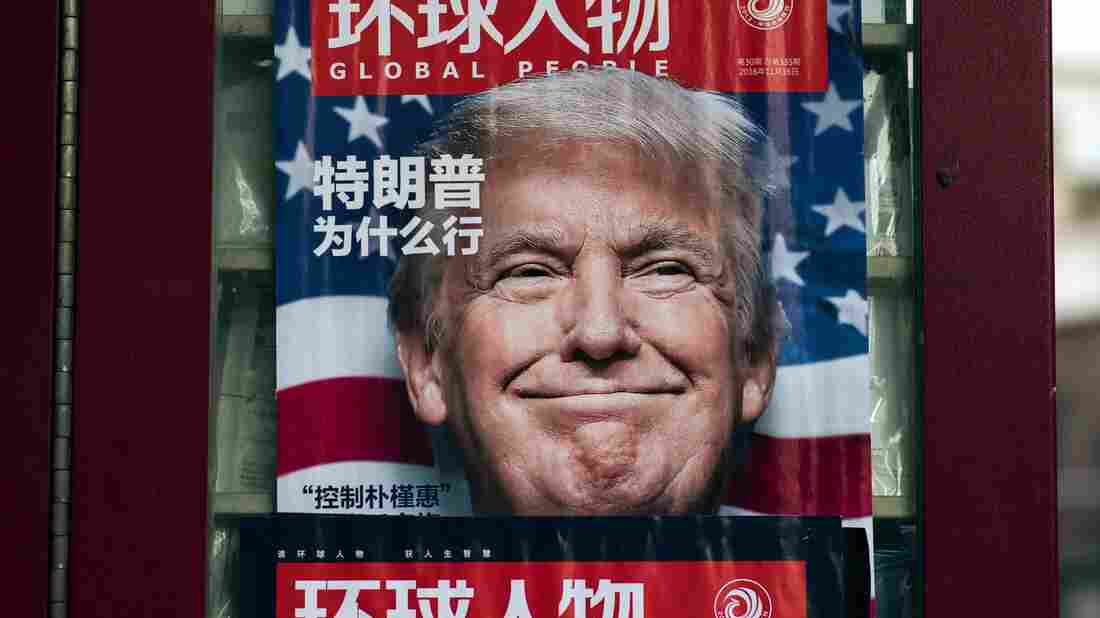 This picture taken on Dec. 14, 2016, at a news stand in Shanghai shows an advertisement for a magazine featuring Donald Trump, who would soon take office as president, on the cover. Johannes Eisele/AFP/Getty Images hide caption 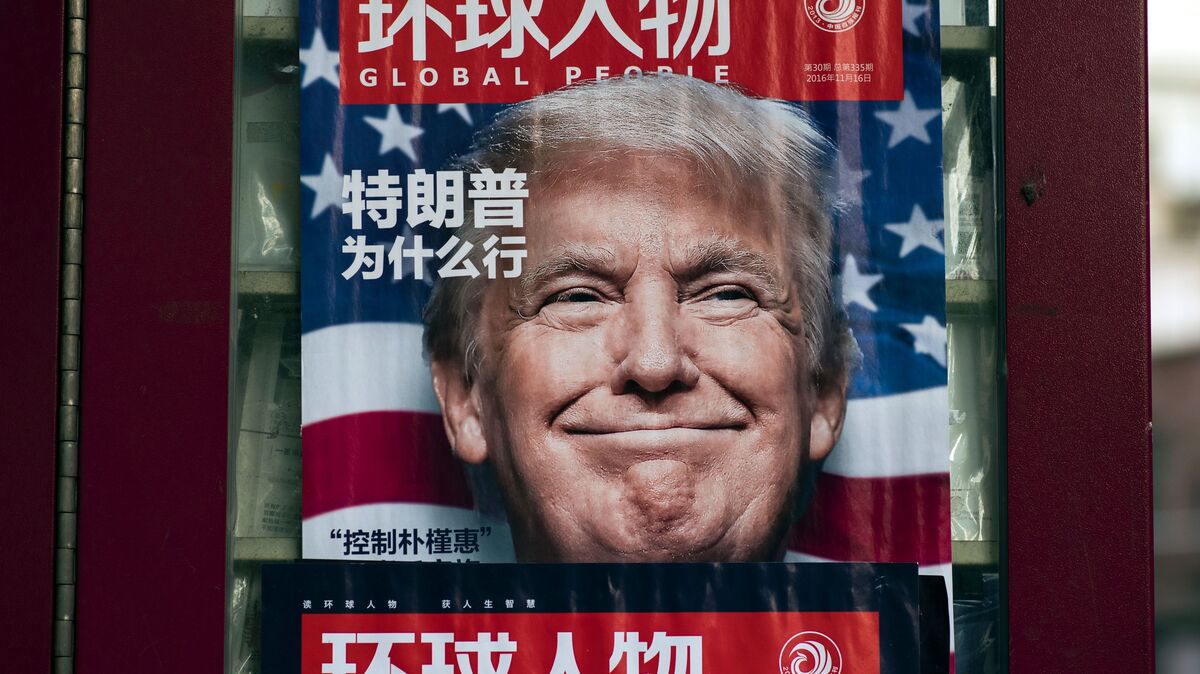 This picture taken on Dec. 14, 2016, at a news stand in Shanghai shows an advertisement for a magazine featuring Donald Trump, who would soon take office as president, on the cover.

Donald Trump's rhetoric on China and trade has been blunt, to say the least.

"We can't continue to allow China to rape our country — and that's what they're doing," he said at a May 2016 campaign rally. "It's the greatest theft in the history of the world."

His tone was a bit more measured leading up to his meeting with Chinese President Xi Jinping, though the message was similar: The U.S. must be tough on China when it comes to trade.

"The meeting next week with China will be a very difficult one in that we can no longer have massive trade deficits ... and job losses," the president wrote across two tweets. Trump continued, "American companies must be prepared to look at other alternatives."

...and job losses. American companies must be prepared to look at other alternatives.

Trump's anti-trade rhetoric was great politics during the campaign. But the hard truth is that getting those jobs back from China just won't happen — indeed, China isn't primarily responsible for manufacturing job losses in recent years. But if Trump is concerned about the jobs lost to China, there are other steps he can take right now, some of which don't at all involve negotiating with President Xi.

What exactly has (and hasn't) the U.S. lost to China?

The U.S. has most definitely lost jobs to China. In perhaps the most commonly cited recent paper on the matter, a group of economists led by MIT's David Autor found that between 1990 and 2007, Chinese import competition accounted for the loss of 1 million manufacturing jobs — about 25 percent of the total manufacturing job loss over that period.

(In fact, Trump may want to thank Xi for all his country's exports; those same economists plus Lund University's Kaveh Majlesi found in a January paper that, all other things being equal, if "the growth in Chinese import penetration had been 50 percent lower than the actual growth" in Wisconsin, Michigan and Pennsylvania than it was between 2000 and 2016, those states would have chosen Hillary Clinton, and she would have won the Electoral College.)

In addition, China has not lived up to a variety of commitments it made when it joined the World Trade Organization, according to a January report from the U.S. trade representative's office. In areas including intellectual property protections, the government's favoring of state-owned enterprises and "troubling agricultural policies that block U.S. market access," the USTR said the Chinese government could stand to improve.

"Is a country like China different, and is it more likely that they are — cheating isn't necessarily the right word, but — doing more of these kinds of things that are more worrisome than other countries?" said Chad Bown, senior fellow at the Peterson Institute for International Economics. "And I think the answer to that is probably yes."

So there are reasons for concern regarding the U.S. trade relationship with China. But if China did indeed suck 25 percent of manufacturing jobs out of the U.S. over nearly two decades, that leaves about 75 percent of those jobs that weren't lost to China.

"I used to go out on an auto factory floor and it looks like Fifth Avenue in New York at Christmastime," said Carla Hills, who served as U.S. trade representative under George H.W. Bush. "Today, you look at the floor and there are six people with long white smocks and buffers on their shoes."

There are a host of things that Trump might be able to do to improve the U.S. economy when it comes to trade with China. But let's start with one thing he can't do:

He at one point threatened to impose a 45 percent tariff on China's goods. There are some big problems with that approach. One is that it simply wouldn't be that effective.

"That would bring some manufacturing production back to the U.S.," said Gordon Hanson, who co-wrote that study on U.S. jobs moving to China. "But that's not the same thing as manufacturing employment. The jobs that left were 20th century jobs. That is, they were jobs in factories that were built using older vintage technology that was more labor intensive than 21st century tech in which automation is more present."

Not only that, but that could also have the pesky side effect of launching a trade war. Still, there's plenty more that could be helpful to U.S. goods producers.

Rather than threaten massive tariffs, Trump could try to make the footing a little more equal for both U.S. and Chinese goods.

"There are a lot of industries in which you could make the case that China is violating existing trade rules," said Hanson. "But the response to that is not an across-the-board tariff. The response is to go industry by industry and pick those things apart."

That could be a long (but worthwhile) process of filing complaints with the World Trade Organization. Still, a long string of nonsplashy administrative actions may not suit President Trump's decidedly unsubtle governing style.

Work with other countries

China trades with a lot of other places besides the U.S., so the U.S. could band together with those places to put pressure on China to change its trade practices.

According to Hanson, the U.S. could "get together with the EU, get together with a bunch of WTO partners, document violations, and say, 'Look: if you don't remove those subsidies, then we're going to enact a series of retaliatory tariffs on other products.' "

Trade deficits aren't inherently bad, but if the U.S. does want to sell more goods to China, the Trump administration could try to negotiate China into being more open to U.S. products, says one expert.

"In general, China's market access restrictions prevent the consumption of American goods and services," wrote the Brookings Institution's David Dollar this week. He points to one example: "In automobiles, a 25 percent import tariff plus domestic content rules in the past mean that American-brand cars sold in China have little U.S. content." Likewise, he said, China could be more open to U.S. agricultural and service industries.

However, it doesn't make sense to make too big a deal (as Trump does) out of any single trade deficit with any country.

Policies that have nothing to do with China

Mainstream economists often say that trade is ultimately a net good; it creates broad, albeit easy-to-ignore-in-everyday-life benefits, like cheaper goods and a wider variety of products. But it also comes with acute pain for those people who do lose jobs.

That same pain is felt by people who lose their jobs to robots, though, said Hills, and if the U.S. is serious about getting former manufacturing workers back to work, that means adopting policies outside of trade pacts.

"We could be criticized for not addressing, in my opinion, the policy of skill training for those who have lost their jobs to automation, and the majority of job losses have been as a result of automation," said Hills. "But if you're someone who lost their job — whether it's a miner in West Virginia or on the floor of a Ford factory — you don't really care if it's automation or international competition."

She points to the transition from horses and buggies to cars.

"The question is, what do you do with the people who were driving the horses and the coaches?" she said. "They don't know how to drive cars. You've got to send them to a skill center."

But then, there's a related problem: Often when new jobs do pop up, they're not near the people who need those jobs, Bown pointed out. There's a related problem in the energy sector, as NPR's Domenico Montanaro wrote last week: The lion's share of the nation's new solar jobs aren't exactly in coal country. That means there could be some sort of way to help people relocate to where the jobs are, Bown added.

Of course, none of that kind of domestic policy will come up as Trump meets with Xi Jinping this week. Plenty of issues will be hanging over their heads — North Korea and missile defense, for example. One thing that won't be hanging over them: the Trans-Pacific Partnership.

Because Trump scrapped the TPP, which had been in process for nearly a decade, the two leaders come to a table where the game board for trade has been overturned and reset. China was not a party to that deal, but the deal was written to allow the U.S. to hem China in on trade by setting stiff and transparent rules on trade in Asia.

However imperfect the TPP was, Hanson said, the U.S. did give China a lot more trading power by giving up the deal.

"We just walked away from it and gave China carte blanche to dictate the way in which trade rules will be written in Asia for the next decade," Hanson said.