Accessibility links
A Body-Switching Teen Romance Anime Disaster Flick With 'Your Name.' On It Your Name. was the most popular film in the world for the first two months of 2017. Now, the deeply resonant body-switching anime comes to the U.S. 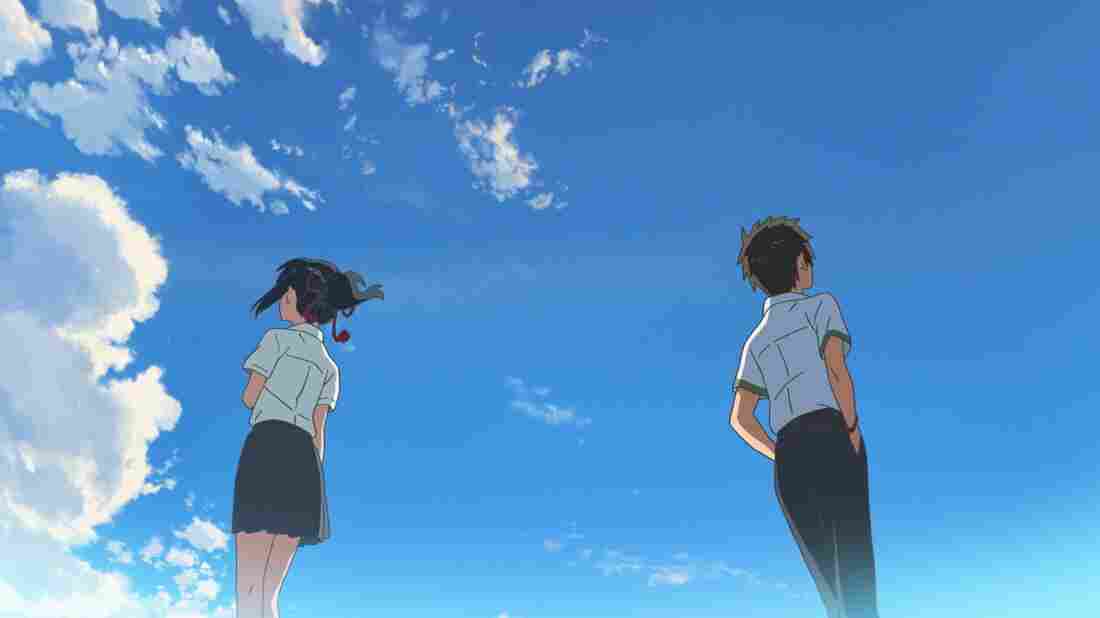 Your Name. starts like a teen rom-com but turns into a harrowing survival tale. Courtesy of Funimation Films hide caption 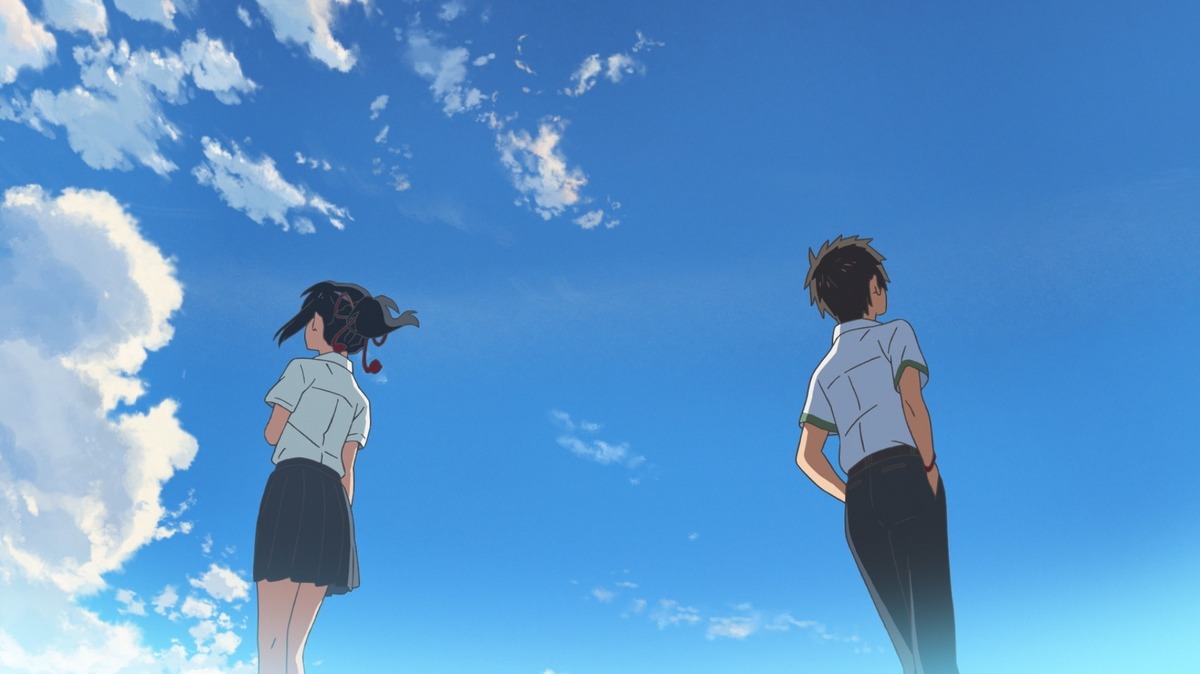 Your Name. starts like a teen rom-com but turns into a harrowing survival tale.

For the first two months of this year, the teen romance Your Name. (the period is part of the title) was the biggest box-office hit of 2017. Never heard of it? Well, it was bigger than Fifty Shades Darker; bigger than Lego Batman.

A surprise anime hit in its native Japan, and subsequently across Asia, Your Name. had taken in more than a quarter of a billion dollars (as of this writing it has grossed $328 million) before getting knocked out of first place on worldwide box-office lists. And at that point it had yet to open in the world's largest movie market: the U.S.

With the recent flop of the live-action Ghost In The Shell, an adaptation of another anime treasure that seemed ideal for crossover success, the time may not be ripe for Your Name. But, well ... never mind. It's here, and it's both gorgeous enough and emotionally engaging enough to be worth seeking out.

The story concerns two teenagers, Taki and Mitsuha, who live a few hours by train apart, and couldn't be more different. Taki's a Tokyo high school boy, raging hormones in full rage. Mitsuha's a few years younger, a country girl, bored with the homemaking rut in which she's stuck in her village in the boondocks.

They'd be unlikely even to know about each other, except one morning, Taki wakes up in an unfamiliar room, looks down at himself, and sees a girl's body. His first impulse is exactly what you'd expect of a teenage boy: He brings his hands to his chest, and marvels at breasts that feel realistic. Then, a look in the mirror clarifies things.

Figuring he's dreaming, Taki reluctantly decides to go with the dream, checks a cellphone near the bed, and uses it to figure out what's expected of him as Mitsuha.

Something similar happens in his bedroom, where Mitsuha wakes up, looks at herself and sees Taki's body. She's even more alarmed, until she looks outside and realizes she is in bustling Tokyo, which has long been almost as mythical as Oz in her imaginings. She's definitely going with it. 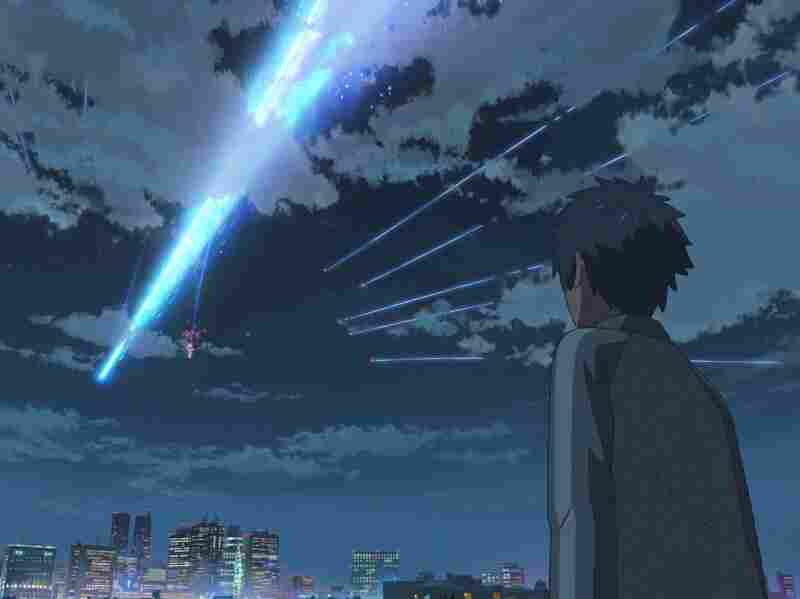 Director Makoto Shinkai adapted Your Name. from his own novel. Courtesy of Funimation Films hide caption 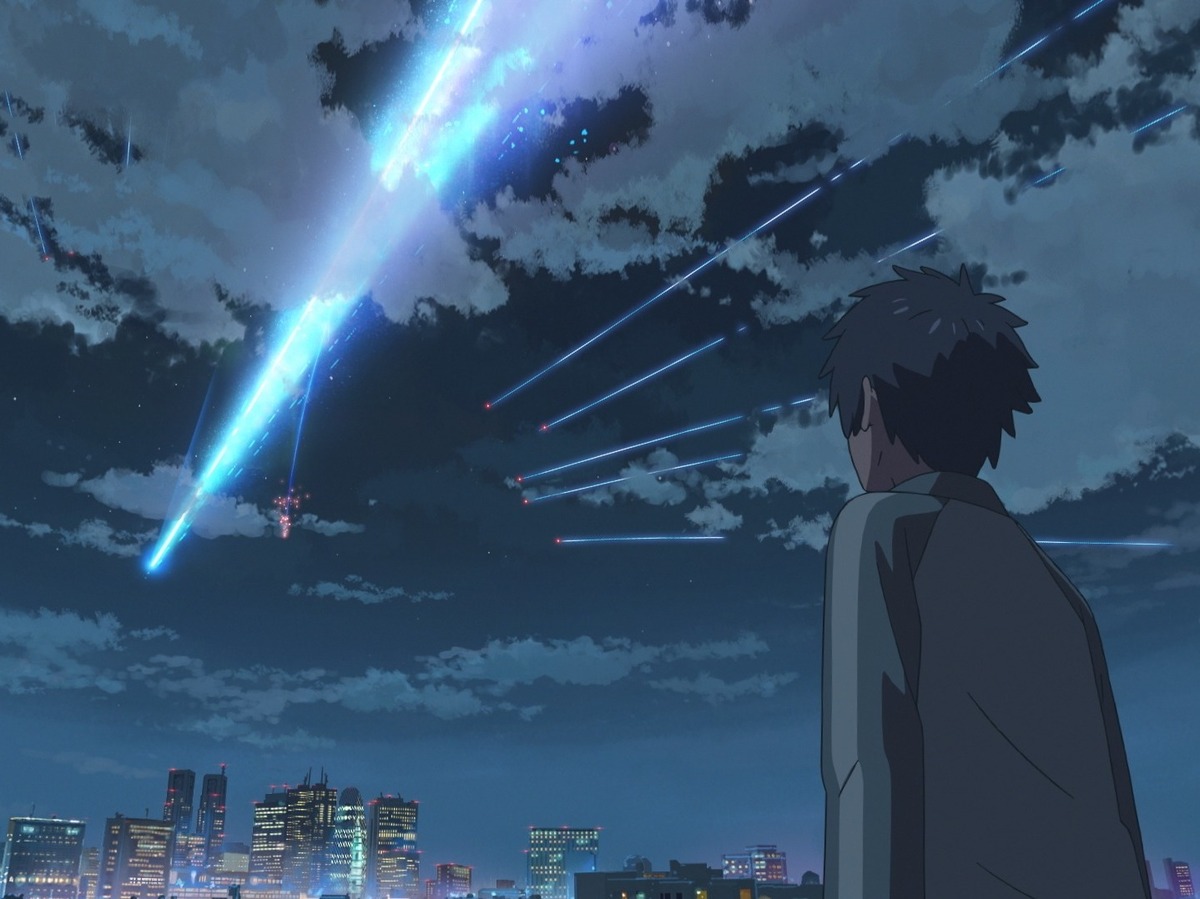 Director Makoto Shinkai adapted Your Name. from his own novel.

They stumble through their respective days, both of them assuming they're just having a strange dream. But over the course of a couple of weeks, they realize from the reactions of others that they are somewhat randomly ending up in each other's bodies. They start working out ground rules, leaving helpful notes, trying not to wreck each other's lives, and in fact helping out in some ways. Taki makes Mitsuha more assertive in class. She, meanwhile, arranges a date with a girl he has been afraid to ask out.

And at about the moment you're ready to scream at them to just meet already, what has seemed like a glistening, teen rom-com turns into a darker, more affecting, very different sort of story — a harrowing survival tale that blends elements of Japan's recent real-life nuclear-reactor meltdown with the last reel of the disaster movie Deep Impact, plus time travel — in short, anime doing what anime does best.

Along the way you realize how smart writer/director Makoto Shinkai has been in adapting his own novel for the screen — and not just with beautiful images. Take the body-switching. With all the changes wrought by puberty, teenagers effectively wake up in new bodies each morning anyway. Developing breasts do, of course, interest Taki — he's a boy. But they're new and a little surprising for Mitsuha, too.

So are the feelings these kids are experiencing, the tension between respect and rebellion, and of course, the urgent need to recall the name they can't remember from the dream they're not sure they're having.

By the time Taki sketches from memory a town he is sure he has never visited, and wonders "Why does looking at it make my chest so tight?" you'll have realized this is not the cute little switcheroo comedy you thought you were watching at the beginning. It's deeper, more resonant, in some ways a meditation on fate.

In the U.S., theaters have been offered a choice by the film's distributor: They can show Your Name. dubbed into English, or in Japanese with subtitles. I've seen both versions, and while they have different drawbacks and virtues — the body-discovery bits feel overly cute in the English version, whereas the folkloric middle section feels stronger — the story is affecting either way. Taki and Mitsuha think they're dreaming, and after about the first 40 minutes of their shimmering film, you may think you are, too.