Accessibility links
Revisiting A Masterpiece: When Frank Sinatra Collaborated With Antonio Carlos Jobim Sinatra was well into his Rat Pack era, the reigning American embodiment of masculine suavity and aplomb, when he teamed up with the Brazilian maestro for one of the best albums of his career. 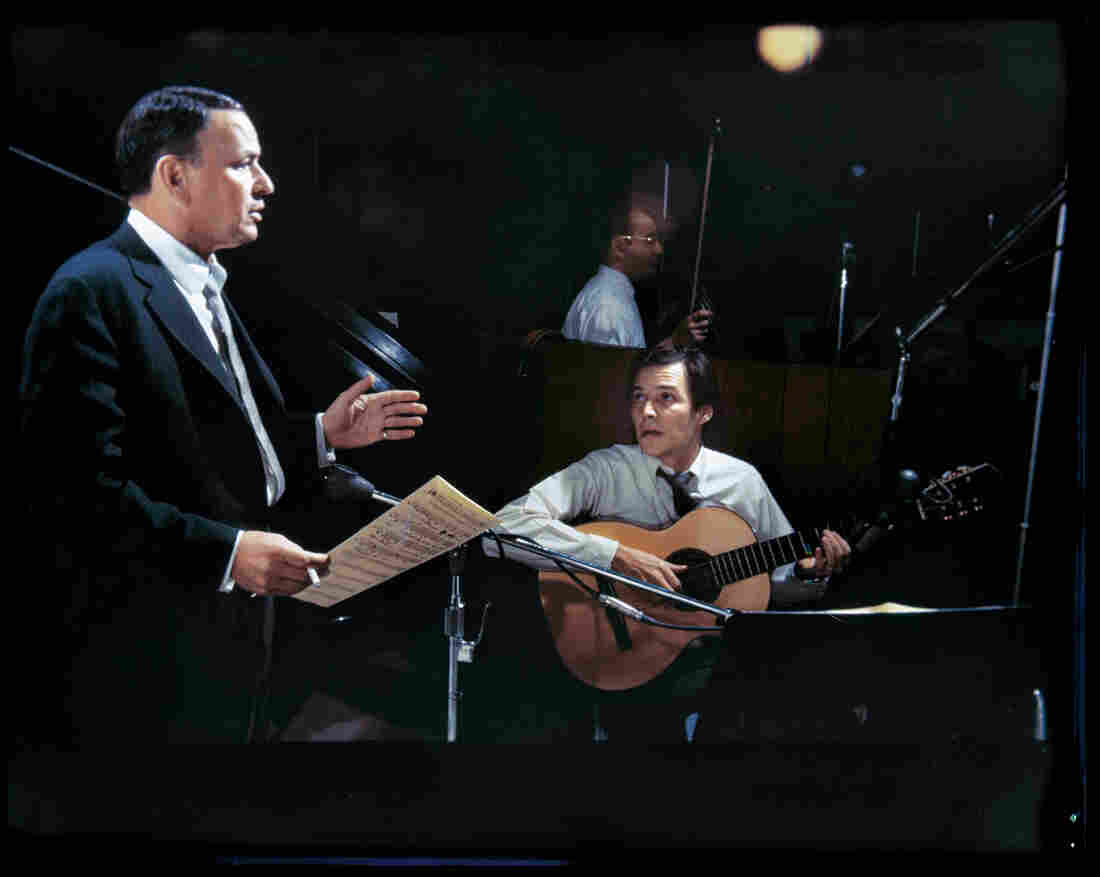 Frank Sinatra and Antonio Carlos Jobim in the studio.

Frank Sinatra was well into his Rat Pack era, the reigning American embodiment of masculine suavity and aplomb, when he teamed up with a maestro of Brazilian music to make one of the most exquisitely tender albums of his career. That album, Francis Albert Sinatra & Antonio Carlos Jobim, has lost none of its luster since it was first released 50 years ago. In fact, a newly remastered anniversary edition extracts additional depth from Claus Ogerman's orchestrations, which frame Sinatra's voice like a Rolex on a velvet cushion. 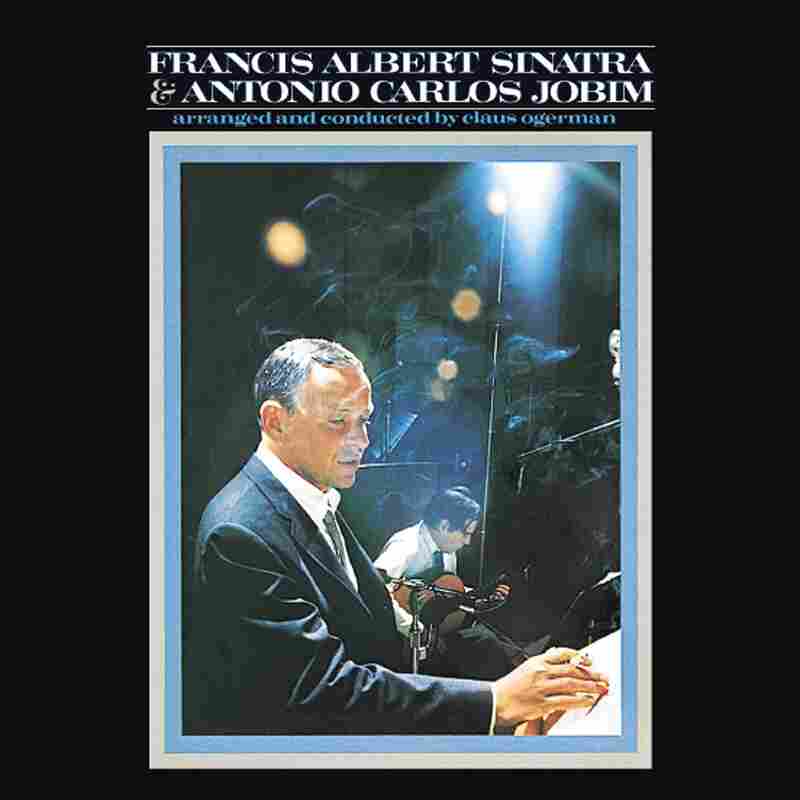 The album, recorded in Hollywood in the winter of 1967, captures both Sinatra and Jobim at an apex, flush with creative and popular success. Sinatra was coming off a knockout run of albums on his Reprise label — including Sinatra at the Sands, recorded with the Count Basie Orchestra; That's Life, a Top 10; and Strangers in the Night, whose title track became an unstoppable hit.

Jobim, a pianist and guitarist as well as a composer, was the beating heart at the center of a worldwide bossa nova craze, following the success of Getz/Gilberto. A joint effort of the American tenor saxophonist Stan Getz and the Brazilian guitarist and singer João Gilberto, that album also served as a showcase for Jobim's songs, including "The Girl From Ipanema," a runaway smash. 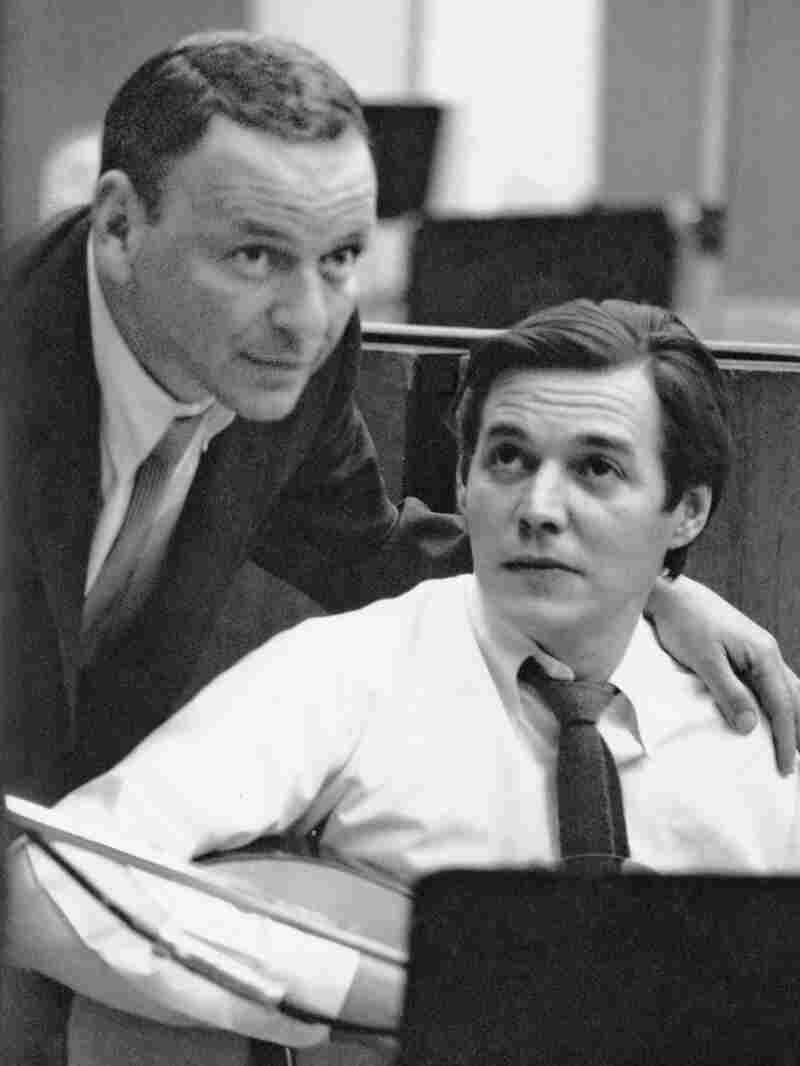 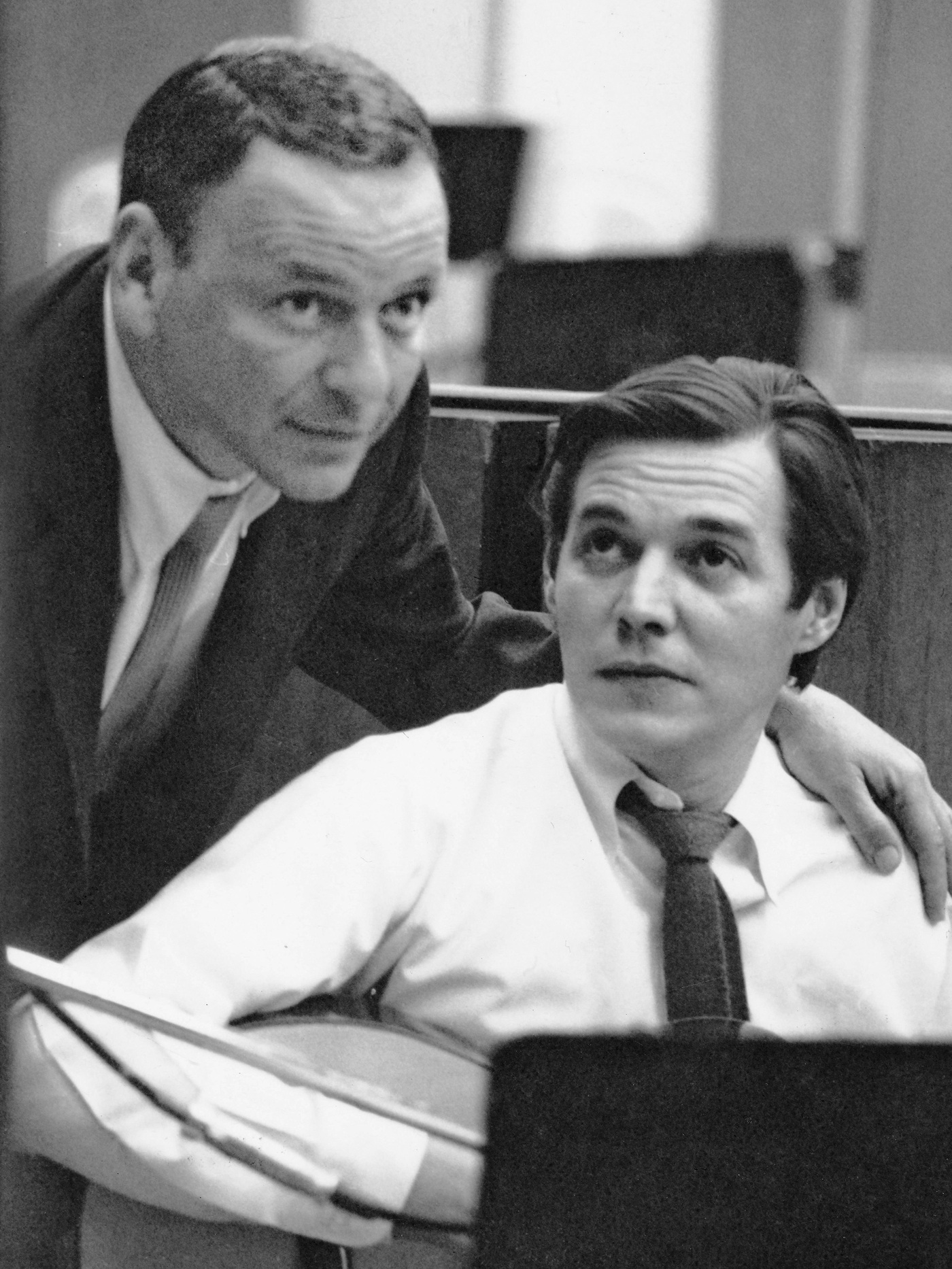 The 50th anniversary edition of Francis Albert Sinatra & Antonio Carlos Jobim has just been released in various formats, including two vinyl packages. And along with the music from the original album, it includes two previously unreleased tracks: A live medley from a television special, and part of a session reel for "The Girl From Ipanema," which Sinatra and Jobim sing as a duet.

"Don't let it run away, fellas, with the tempo," Sinatra cautions at the top of the first take. "Just hold it down, let it settle down. Because it's got a lot of — it's got a gang of words." After the take is finished, he calls for another one, "right away." His decisive brusqueness strikes a jarring contrast to the singing, which is as delectably airy as a soufflé.

The commercial relevancy of bossa nova is one way to explain Sinatra's keen interest in Jobim: He was aware of his tenuous position within a cultural moment increasingly defined by The Beatles. But his treatment of this music belies any charge of opportunism. While bossa nova presented a new angle for him as a singer — "I haven't sung so soft since I had the laryngitis," he quipped during the sessions — he clearly regarded the style as something more than a novelty.

"No other American pop star would so thoroughly immerse himself in the world of bossa," writes Will Friedwald in his fine critical biography Sinatra! The Song is You: A Singer's Art. "He not only recorded two whole albums' worth of the stuff but sacrificed his signature stylistics in order to more smoothly fit into the new vernacular."

Consider the sensitivity of Sinatra's phrasing on "Quiet Nights of Quiet Stars," a version of Jobim's "Corcovado" with English lyrics by the critic Gene Lees.

The balance of voice and orchestration is so impeccably calibrated that it has effectively been canonized: When Diana Krall made her own bossa nova album in 2009, she named it Quiet Nights, enlisting Ogerman as arranger (who won a Grammy for his efforts).

In its original iteration, Francis Albert Sinatra & Antonio Carlos Jobim broke into the Top 20 and spent 28 consecutive weeks on the Billboard album chart. According to Michael Bourne, the host of Singers Unlimited on WBGO, it marked another layer of validation for bossa nova in the American pop mainstream. "Even after the album Getz/Gilberto won a Grammy as album of the year," said Bourne, "the Sinatra/Jobim album was a musical apotheosis, a blessing of Jobim's songs from America's musical Pope."

There was, however, one distinction that eluded the album. Sinatra had won album of the year at the previous two Grammy Awards — for September of My Years (1965) and A Man and His Music (1966) — but he wasn't destined for a threepeat. While Francis Albert Sinatra & Antonio Carlos Jobim was nominated, and perhaps even the frontrunner, the top honor went to another album that has stood the test of time: Sgt. Pepper's Lonely Hearts Club Band.