Accessibility links
During World War I, U.S. Government Propaganda Erased German Culture As the U.S. entered World War I, German culture was erased as the government promoted the unpopular war through anti-German propaganda. This backlash culminated in the lynching of a German immigrant.

This week marks the centennial of U.S. entry into World War I, a conflict that shattered empires and cost millions of lives. On the American home front, it made this country less culturally German.

Today, when the question of loyalty of immigrants has again become contentious, what happened a century ago has special relevance. World War I inspired an outbreak of nativism and xenophobia that targeted German immigrants, Americans of German descent and even the German language. 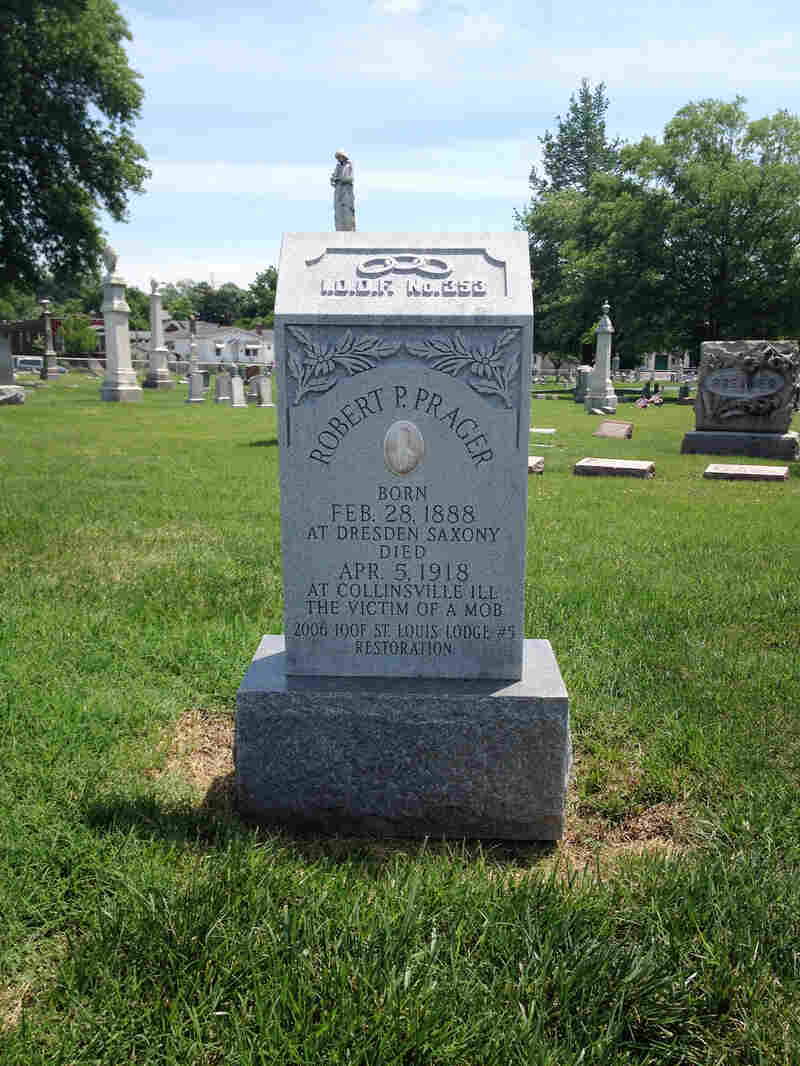 German-born Robert Prager was lynched in Collinsville, Ill., in 1918. Some Germans and German-Americans were attacked during World War I. Courtesy of Jeffrey Manuel hide caption 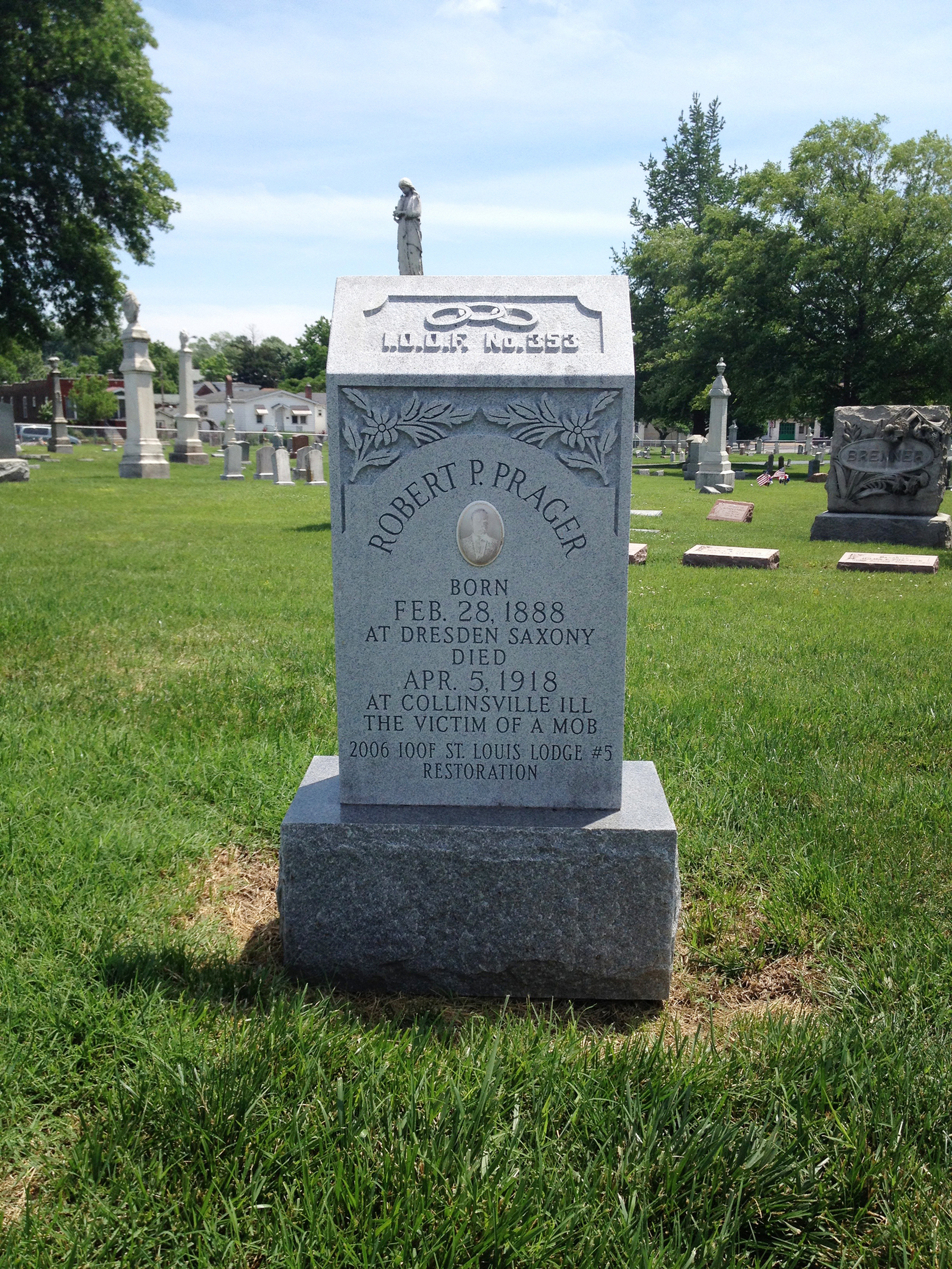 German-born Robert Prager was lynched in Collinsville, Ill., in 1918. Some Germans and German-Americans were attacked during World War I.

It was a remarkable reversal of fortune. Germans were the largest non-English-speaking minority group in the U.S. at the time. The 1910 census counted more than 8 million first- and second-generation German-Americans in the population of 92 million.

There were still more German-American families that had been in the country longer, many since Colonial times. They were Catholics and Protestants, Lutherans and Mennonites, Jews and free thinkers of no religion at all.

"During the 1850s, 900,000 — almost a million — Germans went to the United States," says historian Kenneth Ledford of Case Western Reserve University in Cleveland. "That's at a time when the German population was only about 40 million."

German-Americans often worshipped in churches where German was used. They could live on city streets or in towns with German names. And while many immigrants assimilated into the English-speaking mainstream, many others sent their children to German-language public schools.

Ledford says cities such as Cleveland, Cincinnati, St. Louis, and Chicago gave parents the option for their children in elementary school to receive their instruction in German as well as in English.

"German was the lingua franca of the literary scene, of the entertainment scene, of the theaters," says Richard Schade of the University of Cincinnati. He says many cities were also home to German-language newspapers and clubs where German was spoken.

Inside The Vacant Caverns Of St. Louis' Other Beer Baron

The social life of the community was lubricated with the beverage Germans brought from the old country. Lager beer was drunk cold in beer halls. Beer put Germans on a collision course with the growing temperance movement. But the biggest collision ahead was over language. Before World War I, German wasn't just an ethnic minority language; it was the most studied modern foreign language in America.

Legal historian Paul Finkelman says in 1915 about 25 percent of all high school students in America studied German. But by the end of the World War I that had changed dramatically. German had become so stigmatized that only 1 percent of high schools even taught it.

"During the war, there is an argument that if you learn German, you will become the 'Hun,' " Finkelman says, using the pejorative term for anyone from Germany. "And there was this notion that language was somehow organic to your soul. So if you spoke German, you would think like a German, you would become a totalitarian in favor of the kaiser."

For the first three years of the war, the American people were divided over getting involved. When members of minority groups spoke against entering the war in support of Britain, including some, but not all German-Americans, their patriotism was questioned. They were disparaged as "hyphenated Americans."

After President Woodrow Wilson took the country into war he said, "Any man who carries a hyphen about with him, carries a dagger that he is ready to plunge into the vitals of this Republic when he gets ready."

"Hans Kuhnwald, the concertmeister of the Cincinnati Symphony Orchestra, was interned; the German language was forbidden; the German-American press was heavily censored; libraries had to pull German books off the shelves; German-American organizations were targeted," Schade says, "and what happened, of course, is the German-Americans considered themselves to be good Americans of German extraction, several generations removed from the old country."

The demonization of German-Americans took its ugliest turn in Collinsville, Ill., which is now a suburb of St. Louis. On April 4, 1918, a German immigrant, Robert Prager, was lynched.

Robert Stevens, vice president of the historical museum in Collinsville, says Prager's nationality wasn't the only thing that led to his murder. He was a socialist who worked at a local coal mine, and he was on the wrong side of the miners union. But that April night, Prager got on the wrong side of a drunken mob that accused him of spying for Imperial Germany.

"They stripped him totally naked, and they put a rope around his neck, and they paraded him down Main Street, making him sing patriotic songs," Stevens says. "And they would take their beer bottles and break them in front of him. So he had to step on the broken beer bottles, cut his feet really badly."

Prager professed his love for America and kissed the flag that his tormentors wrapped him in. Even so, he was taken to the edge of town to a hanging tree.

Pete Stehman, who grew up in Collinsville, says the townspeople didn't talk about Prager for decades, but over the years he became fascinated with the mob's crime and the town's silence. He has written a book about it.

He says that when 11 men were put on trial for the lynching, they were all acquitted. And he points out that the local newspaper wrote about the verdict.

At A Hefty Cost, World War I Made The U.S. A Major Military Power

"The community is well convinced he was disloyal," the newspaper article read. "The city does not miss him. The lesson of his death has had a wholesome effect on the Germanists of Collinsville and the rest of the nation."

While historians differ on what effect this had on German-Americans, Frederick Luebke, author of Bonds of Loyalty: German-Americans and World War I, says "a few reacted by asserting their Germanness with new vigor." But he adds, "others sought to slough off their ethnicity as painlessly as possible."

In the anti-German hysteria of World War I, the assimilation of German-Americans was accelerated. And being a hyphenated American would mean being suspect in nativist eyes for decades to come.