Accessibility links
Family, Death And A Road Trip In 'Ashes To Asheville' Scott Simon talks with author Sarah Dooley about her book Ashes to Asheville. It's about sisters trying to fulfill their mother's dying wish to spread her ashes in the last place the family was happy.

Some books can sweep you away in the first sentence. Sarah Dooley's new book Ashes To Asheville begins with a riff that includes sisterhood, death, cute pets and saucy widows. 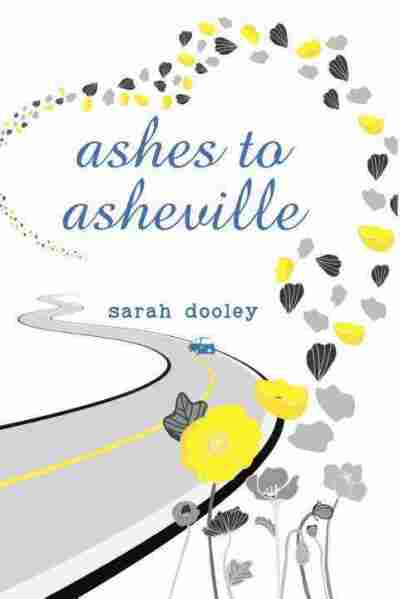 "Right before my sister, Zany, steals our dead mother off the mantel, I'm trying to decide which sock to stuff in Haberdashery's mouth to shut him up. He's barking every five seconds, yip yip yip, all shrill like a smoke detector with its batteries low. It's a wonder Mrs. Madison hasn't come downstairs in her slippery cheetah robe, waving Mr. Madison's ancient handgun. She keeps the thing in her purse, says a widow as pretty as her needs protection, especially with, what she calls it, her assets. I thought she was talking dirty the first time I heard that, till Mama Shannon explained she meant money."

Sarah Dooley has written several best-selling novels for young adults including Free Verse and Body of Water. Her newest novel is a story about about sisters trying to fulfill their mother's dying wish to spread her ashes in the last place the family was happy.

I definitely did take a few minutes pause to think about that, but the story that Fella and Zany had to tell about not only the mother they lost, but the mother that they still have was so important that it overrode any doubts that I had.

So Fella is the narrator she. Her name is Ophelia, and she goes by the nickname Fella. She's 12 years old. She's the one telling the story and she's hitting the road with her 16-year-old sister Zoey Grace who goes by Zany.

On why the two sisters are separated

Because of the the laws in place governing the legalities of same sex marriage at the time that Fella and Zany were growing up, which was the early 2000s, their mothers were not able to be legally married. So when Mama Lacy passed away her biological child Fella, who's telling the story, was sent to live with Mrs. Madison, her grandmother. Zany on the other hand stayed behind with their other mother because she was biologically related to Mama Shannon. So when they lost Mama Lacy, which they couldn't have foreseen, their family structure was shaken, not only by the loss of one mother, but by Fella then losing the only other mother she knew, as well as her sister and having to go live with a virtual stranger.

On the road trip Fella and Zany undertake

Zany shows up in the middle of the night to sweep Fella away along with Mama Lacy's ashes. She wants to celebrate Mama Lacy's birthday by scattering her ashes in the last place that they ever felt at home as a family together which was Asheville, N.C. So they're going from the Beckley, W.Va. area to the Asheville, N.C. area. They think they can make it there and back before anybody wakes up in the morning. Of course, they've never gone on a long road trip alone together, so they don't know what's lying in wait for them.

On what readers can take away about relationships from the book

I been asked a lot of times why I chose to write about a nontraditional family or a family that was different, but Mama Lacy and Mama Shannon are such typical parents. They fight, they argue, they tease each other, they embarrass their children in public. They struggle with finances and they struggle with household decoration and car repair, and just all the little details that make a family typical and make up a life together. I hope that readers can take away from the book that no matter what your relationship looks like there's a lot more that make people the same than that make them different.

On why she became a writer

On relating to children's literature and writing it

I still read a lot of children's literature. I think there are some amazing voices. I read and re-read books like Homecoming and The Outsiders and those are books that I can pick up and go home to again. As somebody who moved a lot, and didn't have necessarily a childhood home to go back to, those books are my childhood home. I wanted to write stories for kids and about kids who didn't necessarily know the path that they were expected to take, and we're forced to find their own path. Those are the kids who I think have the best adventures.