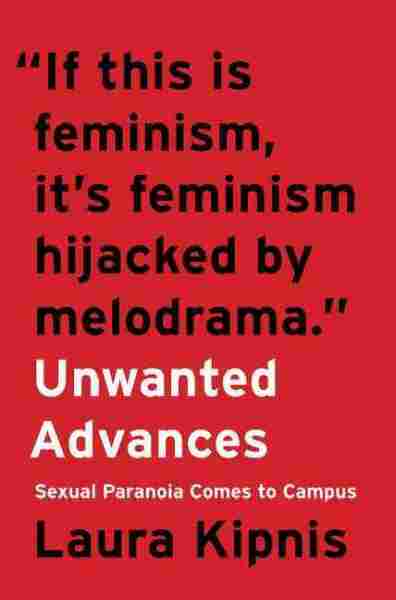 A few years ago Laura Kipnis — a tenured professor at Northwestern — published an essay in the Chronicle of Higher Education. In it she argued that the rules governing sexual relationships between students and professors had become draconian. The response was intense, eventually growing to include a Title IX investigation filed against Kipnis by two graduate students. She was ultimately cleared, but Kipnis has more to say. She tells me that Title IX, "which started out, you know, as something about equity for things like women's sports, was expanded in 2011 to include sexual harassment," including creating a hostile atmosphere on campuses. "Very vague sorts of things can now be charged under Title IX. So since then, because they didn't really specify how campuses should do this, there's just an incredible amount of overreach because all the campuses are afraid of losing their federal funding — and also being seen as soft on sexual assault."

On whether there is a sexual assault problem on campuses

It is an issue, but it's a question about whether it's more of an issue now, or whether what's being defined as sexual assault is actually being expanded. And so there a lot of cases where you have unwanted sex or ambiguous sex being labeled after the fact as sexual assault, or even consent being withdrawn after the fact, sometimes even years after the fact — and I wrote about a case like that in the book.

'How To Become A Scandal' Is Smart, But Timid

On deciding to write this book

... the fear around speaking out about this stuff, and the paranoia around sex has meant an overall decline in intellectual freedom.

I was in, like, an advantageous situation because I have tenure at a research university. But what happened was, after I wrote about my Title IX — the piece was called "My Title IX Inquisition" — I was just deluged with letters and emails from people all over the country who'd been through similar procedures. Not for an essay, but for all manner of other things, including things like making eye contact that somebody else didn't like, or telling a joke in an off-campus bar that somebody thought was overly sexual. So I had just all of this information that's just not public, and people who have been charged are afraid of coming forward, because they can be charged with more crimes if they go public, and the same thing in my case — I could have been charged with more retaliation complaints by going public — so I did feel there needs to be more transparency around this process, and more of a public discussion about how Title IX is being used.

On her eventual exoneration

I almost thought the reason that I was cleared in this investigation was more to protect Title IX than necessarily to clear me. Because I do think that if I were found guilty of this charge and went public as I had said, I said I planned to write about the process, that Title IX would have come under a lot of scrutiny because of the abridgement of academic freedom, intellectual freedom. And I also do think the fear around speaking out about this stuff, and the paranoia around sex has meant an overall decline in intellectual freedom and the ability to ask tough questions about sexual politics on campus right now.

On training students to deal with sexual harassment and assault

I think women should be taught self-defense, physical self-defense. I think it changes your sense of yourself, your sense of agency, your ability to feel capable of dealing with situations where you are possibly threatened ... and I think we need to have honest discussions about drinking, and the amount of binge drinking and drinking to pass out that's going on. And that's not slut-shaming and it's not blaming the victim, but it is saying women ... we have to take responsibility for our bodies, not just leave it up to administrators and regulators, and not just leave it up to men to change, because, you know, what if they don't?