Accessibility links
A Mountain Lion Kitten Is Found, Leading To Excitement And Concern A mountain lion kitten was found in the Santa Monica Mountains, just outside Los Angeles. Biologists are excited to see new kittens being born but are concerned about inbreeding. 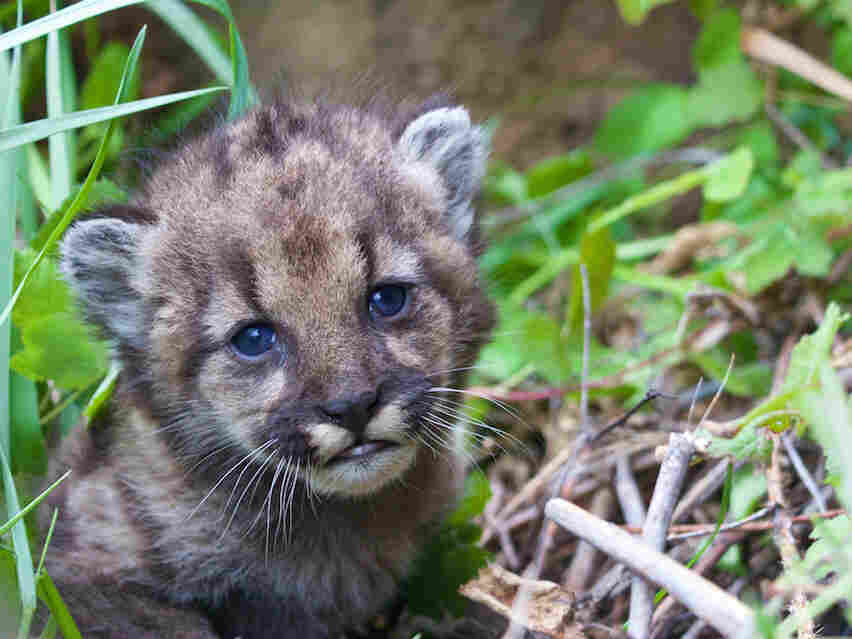 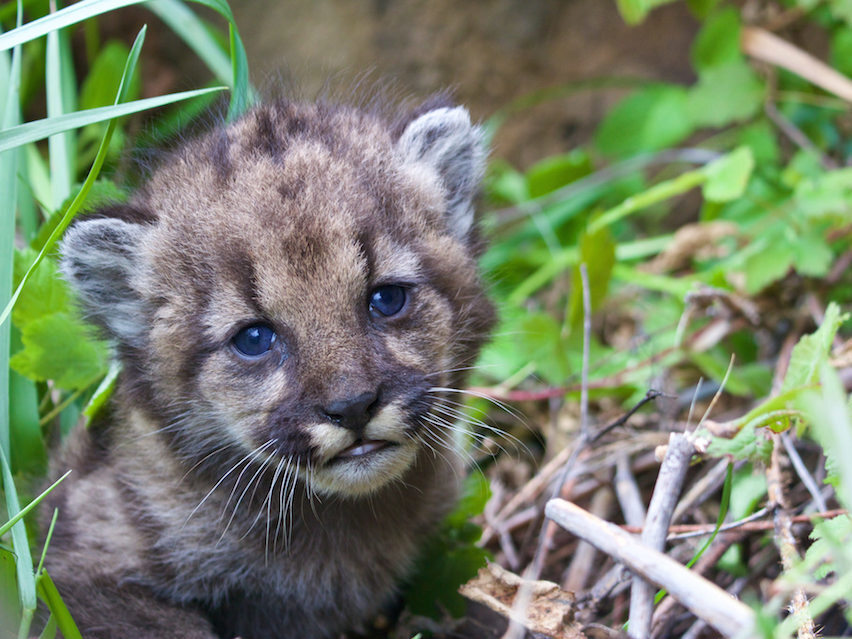 This is mountain lion kitten known as P-54 found in the Santa Monica Mountains National Recreation Area. It is the only known kitten from P-23's third litter, according to the National Park Service.

Admit it. You only clicked on this story because of the photo of that insanely cute mountain lion kitten. You just wanted to gaze into her (yes, it's a her) milky blue eyes.

But there's more to the story of this kitten. Researchers have named her P-54. She's no more than a few months old. And – this is the sad part – it's likely that she's the product of inbreeding.

The kitten was born amidst the urban sprawl of Southern California in Santa Monica Mountains National Recreation Area, the largest urban national park in the country. The recreation area is bordered by the Pacific Ocean, agricultural fields and greater Los Angeles.

"Think of it like an island," says Jeff Sikich, a biologist for the National Park Service, who's been tracking the park's mountain lions in its steep chaparral-covered canyons for more than a decade. "[The mountain lions] are pretty much hemmed in by freeways and development on all sides."

As a result, few cats – or other wildlife, for that matter – are able to come and go, so adult mountain lions resort to inbreeding. Researchers know that the kitten's mother is P-23. And they suspect the father is P-23's half-brother, P-30. They're waiting for genetic testing to confirm their suspicions.

Sikich says it's unlikely that P-30 or other mountain lions know they're inbreeding. Male mountain lions don't stick around to raise their kids. But the results of inbreeding could be devastating to the population's future.

Limited genetic diversity can lead to mutations and abnormalities. Sikich points to the Florida panther, a population that almost went extinct from inbreeding. Researchers started to find genetic defects in the animals – holes in the heart, kinked tails and low sperm counts – before wildlife managers introduced outside panthers into the population to mix things up.

The same thing could start to happen in the Santa Monica Mountains. Sikich says they've only seen one outside mountain lion come into the park in the last 12 years. Others have been turned away by the freeways or killed by passing cars.

"If that was to stay the same into the future, we could get to that Florida panther level in roughly 35 years," he says. "And then once we hit those levels, we can see pretty much 99 percent extinction within roughly 15 years."

P-54 is a healthy kitten, Sikich says. And she'll have a better chance at long-term survival than she would if she was a boy. Most male mountain lions are killed by the park's dominant cats when they get old enough to leave their mother. Without a way to disperse outside of the mountains, they're put in competition with the older males.

And it's not all bad. Sikich and other researchers are encouraged and excited that the kitten was born.

"They are successfully reproducing and raising their young, which is a good thing," Sikich says.

That's impressive, he says, when you consider they're large carnivores living just outside the second-largest urban area in the U.S. And the lessons they're learning by studying the animals and how they survive in an urban and fragmented habitat could be used in other parts of the country. The National Wildlife Federation says that habitat loss, like that caused by fragmentation, is the biggest threat to wildlife in the U.S.

Life In The Park: Finding Meaning In Park Service Work

Park officials and wildlife advocates are hoping to address the fragmentation by building a wildlife overpass, which would connect the Santa Monica Mountains with other wilderness in Southern California. The proposed overpass would bridge over Route 101, a busy highway.

There are challenges to getting the project done, but Sikich is optimistic that the overpass will be built, giving future mountain lion kittens a better chance at long-term success.