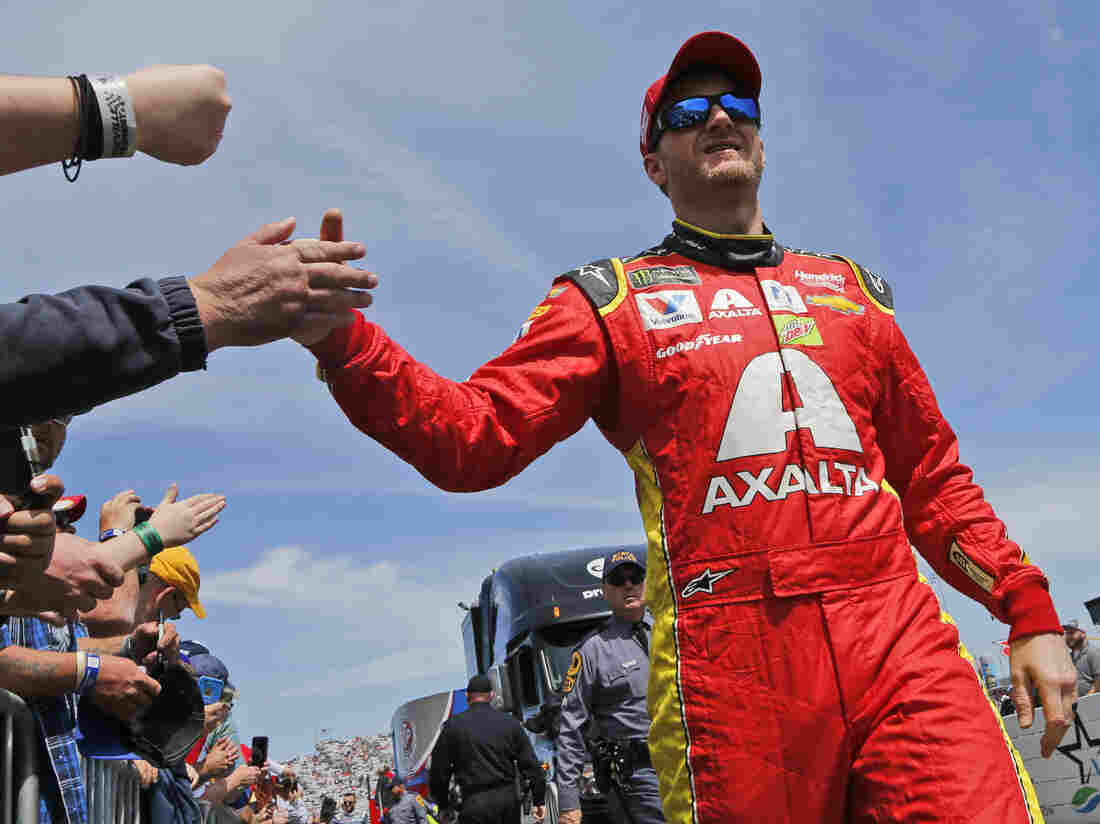 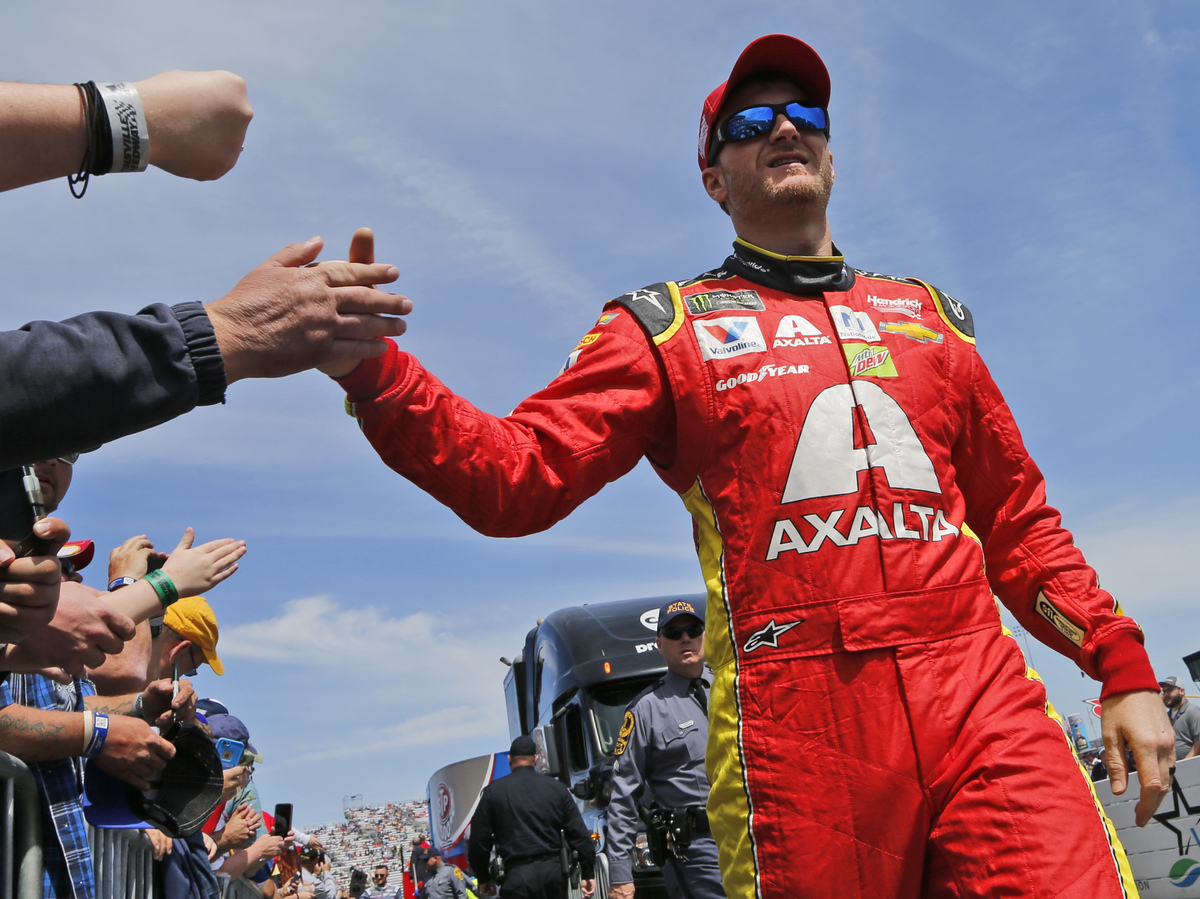 NASCAR's most popular driver, Dale Earnhardt Jr., is back on the track after a long recovery period from having suffered yet another concussion.

Earnhardt Jr. was recently medically cleared to return to competition. We caught up with him right after practice at Texas Motor Speedway for this edition of "Out Of Bounds." He tells NPR's Lulu Garcia-Navarro how concussions have changed NASCAR and his own life.

"I'm excited about what I'm seeing out of NASCAR being more proactive to keep drivers safe and err on the side of safety," he says.

"I certainly am more aware, whether I want to be or not, of how dangerous it is," adds the 42-year-old, who lost his father to racing. "But going through the injury yourself really puts it into perspective of what's important."

You can never be safe enough. I mean, we've learned a lot of things in the past 20 years, made a lot of updates to the race tracks. Soft walls on all the race tracks is mandatory now. You wish you could have had that. ... many years before we had the technology to do it and understood how critical it was in reducing the G-forces of impacts and so forth — making drivers safer. We've improved the interior of the cars as well. We've improved the headrest and all that. We have the HANS device and everything else to keep us safe.

I'm excited about what I'm seeing out of NASCAR being more proactive to keep drivers safe and err on the side of safety. Sometimes, you know, you — drivers are worried about being misdiagnosed and maybe missing a race when they don't really have a concussion. But you can never take the risk there. It's just too dangerous to layer concussions. And the first concussion can be bad enough, but if you don't get it treated and don't get it diagnosed, if you get another one in a very short period of time, that's when you get in serious long-term damage and danger.

On if it's something he talks about with other drivers

I think that all athletes, especially the younger they are, have the competitive spirit and don't want to miss an opportunity and give up their opportunity or give up their chance to another driver or another player or what have you, no matter the sport.

I'm 42 years old, so it's way easier for me at my age to make a more conscious decision to take care of myself rather than put myself at risk. I know for sure that it would be a much harder decision if I was younger and more worried about my opportunity being given to someone else.

On what he worried about when he was younger

I don't think any of us knew the dangers of repeated concussions or the fact that even when you got a concussion, the idea to go get treatment for it never entered our minds. We just didn't have — we weren't educated enough. We were really ignorant to it. I would get concussions in my early 20s racing, and it was a bit of a badge of honor. You almost bragged about being dizzy. And it was something you looked at as much like a bruise. You just let her heal and move on.

I certainly am more aware, whether I want to be or not, of how dangerous it is. And I lost my father in 2001 in racing. And I knew then how dangerous it was. And then — but going through the injury yourself really puts it into perspective of what's important. I'm also in a different — you know, I've got a few things going on in my life that certainly have changed my perspective aside from the injuries and the concussions. My marriage in the off-season definitely reordered some of my priorities. Our wish to start a family one day soon has changed a few things around for me and made me think about life differently.

But I really — I took a big risk, I think, to come back to race. Although I'm healthy, I'm still at danger, just like anyone else out there racing, to get concussions. And having gone through it at one point — during the worst, sickest part about it - I really didn't want to have anything to do with racing. But as I got healthier, I got the itch, I guess, or the urge to come back. And I just want to race as long as I'm enjoying it. When I no longer enjoy it, I find something else to enjoy.

I don't know when that's going to be. And I'm 42, and I look online at statistics of other drivers and not many of them had a ton of success beyond 45. There are a few. But I haven't really decided when I'm going to hang it up.

On what his wife thinks

She was probably the same as me when I was really sick. She didn't want me to do it again. You know, we're both living through this every day. And she saw the worst of it. You know, at that point, you want nothing to do with what got you in that position. But once I started feeling better and I talked her about it, she said, "If you want to go race more, I'm not going to tell you otherwise. I want you to be happy."