Accessibility links
2 Explosions Target Coptic Christians In Churches Across Egypt Two explosions on Palm Sunday targeted Coptic Christians in Tanta and in Alexandria in Egypt. Lulu Garcia-Navarro talks with Bel Trew of The Times of London.

Two explosions on Palm Sunday targeted Coptic Christians in Tanta and in Alexandria in Egypt. Lulu Garcia-Navarro talks with Bel Trew of The Times of London.

Dozens of people have been killed in two separate explosions at Coptic Christian churches in Egypt. The first blast happened during a service to mark Palm Sunday in the city of Tanta, which is north of Cairo. The second attack was a few hours later in Alexandria. We're joined now by Bel Trew. She's the Egypt correspondent for The Times of London, and she's on the road to Tanta now. Thanks for joining us, Bel.

GARCIA-NAVARRO: Hi. Can you tell us what you know about these two explosions?

TREW: Well, what we know is that the death mark - death toll is still mounting. We believe that maybe as many as 18 were killed in Alexandria church, the Mar Girgis church, which - I'm sorry. The Saint Mark's church, which in fact the Coptic pope was attending as he was leading the prayers just during the attack. There was also, of course, an attack in Tanta, which is just north of Cairo, in the Mar Girgis church. There, 26 people were killed and dozens were injured. And the Islamic State group has claimed responsibility for both attacks what appeared to be in a coordinated attempt to basically terrorize the Christian community on Palm Sunday.

GARCIA-NAVARRO: Do we know if the Coptic pope was the target?

TREW: Well, it looks like the Coptic pope might have been the target in the attack on the Saint Mark's Cathedral in Alexandria. He was leading prayers. It was known that he was going to be leading prayers. He was inside the building. The suicide bomber had attempted to enter the church. He was stopped before he could get in there by security forces. At least three members of the police force were killed, including a female police officer, trying to stop him from getting in. And of course, had he, then it would have been a much higher death toll and extremely devastating if, you know, the Coptic pope himself had been killed in this horrific event.

GARCIA-NAVARRO: Cops have been targeted before, particularly around religious holidays. Were police expecting some kind of attack? Was security very tight?

TREW: Well, security has been increased around most of the churches in Egypt because of this basically spike in attacks against the Christians, in particular Coptic Christians, who make up about 10 percent of Egypt's 92 million population. So in December, of course, we had the bombing of Egypt's main cathedral, the - which is also the seat of the Coptic pope, which was - basically almost 25 people were killed in that attack in December. And since then, in Sinai, in north Sinai, we've had a massive spike of attacks from (unintelligible) there, leading to dozens of families actually fleeing their homes in north Sinai to areas in the mainland, saying that they're being hunted down. So amongst this kind of spike in attacks, the Eyptian security forces have increased their surveillance of churches. They have got officers posted outside of cathedrals and religious buildings. (Unintelligible) supposed to be manning metal detectors. But as the bombing in, you know, Alexandria showed today, even if you manage to stop someone from entering the church, they can detonate outside and there's no way of preventing that from happening.

GARCIA-NAVARRO: Just briefly, we have about 30 seconds left, why - what do you think the reaction is among the Coptic Christians after this horrific attack?

TREW: Well, I think from a lot of Christians here, it's one of terror. It really does build into the concerted effort by groups like the Islamic State to target the Christian community. Their homes, their churches are not safe. And the security forces are clearly trying but failing to protect people, especially as - you know, this attack, they targeted the Coptic pope. So I think they're going to be anxious in the coming days, particularly as we have Easter on the horizon and the visit by the Catholic pope at the end of the month. So, you know, I think people at the moment are going to be extremely worried for their safety.

GARCIA-NAVARRO: Bel Trew, Egypt correspondent for The Times of London, thanks so much for joining us. 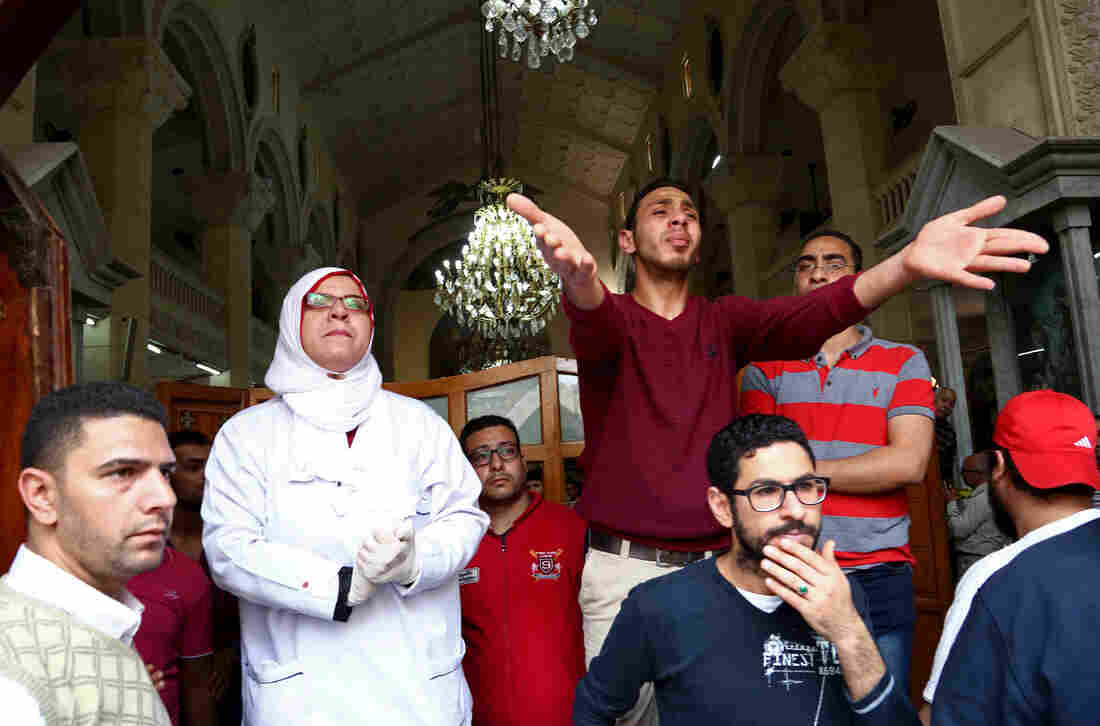 People react at the site of a bomb attack which struck worshippers gathering to celebrate Palm Sunday at the Mar Gerges church in Tanta, Egypt. AFP/Getty Images hide caption 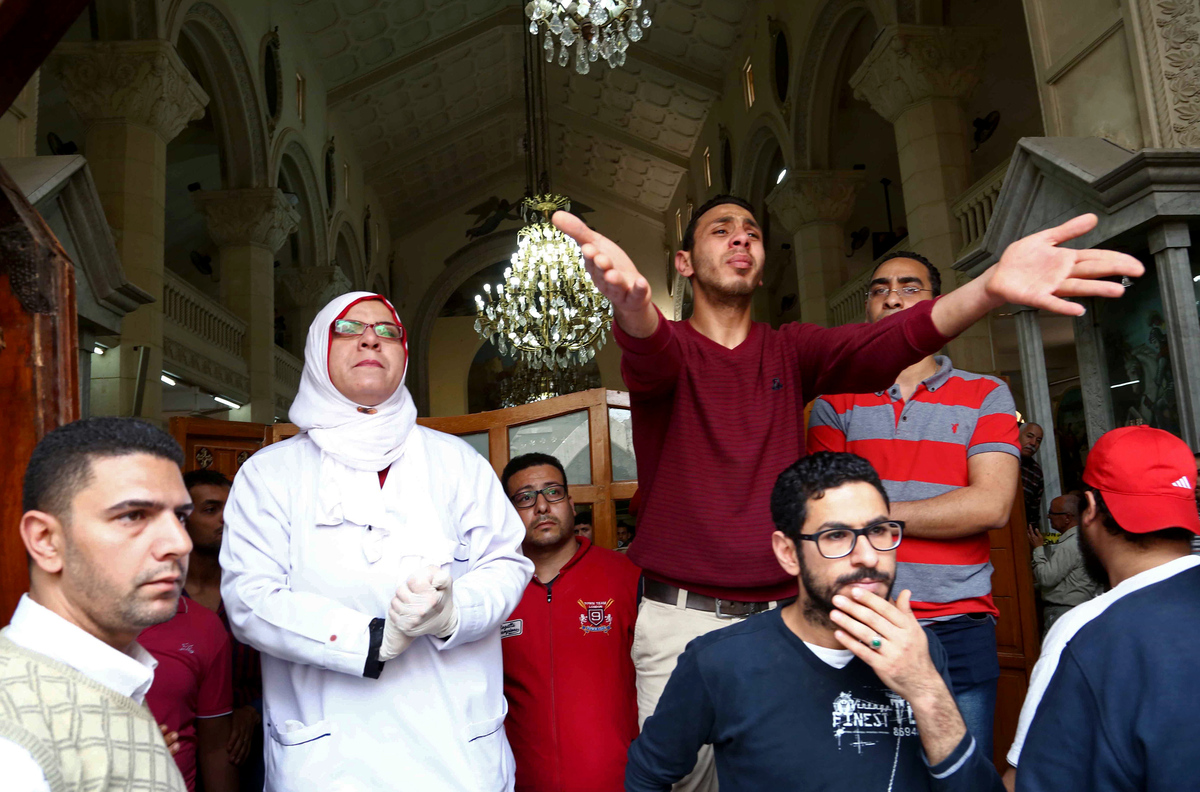 People react at the site of a bomb attack which struck worshippers gathering to celebrate Palm Sunday at the Mar Gerges church in Tanta, Egypt.

At least 44 people were killed and more than 100 injured after suspected suicide bombings in two different Egyptian cities at Coptic Christian churches Sunday.

The interior ministry said one of the explosions was a bombing in Mar Gerges church in Tanta, a city in the north of Egypt in the Nile Delta, located between Cairo and Alexandria. The church was full at the time with worshippers observing Coptic Christian Palm Sunday.

Just hours later and about 80 miles away in Alexandria, a second explosion outside the Mar Markas church killed 16 people and injured 41 others, Mujahed confirmed to state television.

NPR's Jane Arraf adds that the Coptic Pope was in the building, but unharmed by the attack.

Reporter Bel Trew, Egypt correspondent for the Times of London, told NPR that the pope was leading prayers when the suspected bomber attempted to enter the church. Security forces managed to keep the attacker outside, but at least three officers were killed.

The Islamic State claimed responsibility for both explosions through its semi-official Amaq news agency. 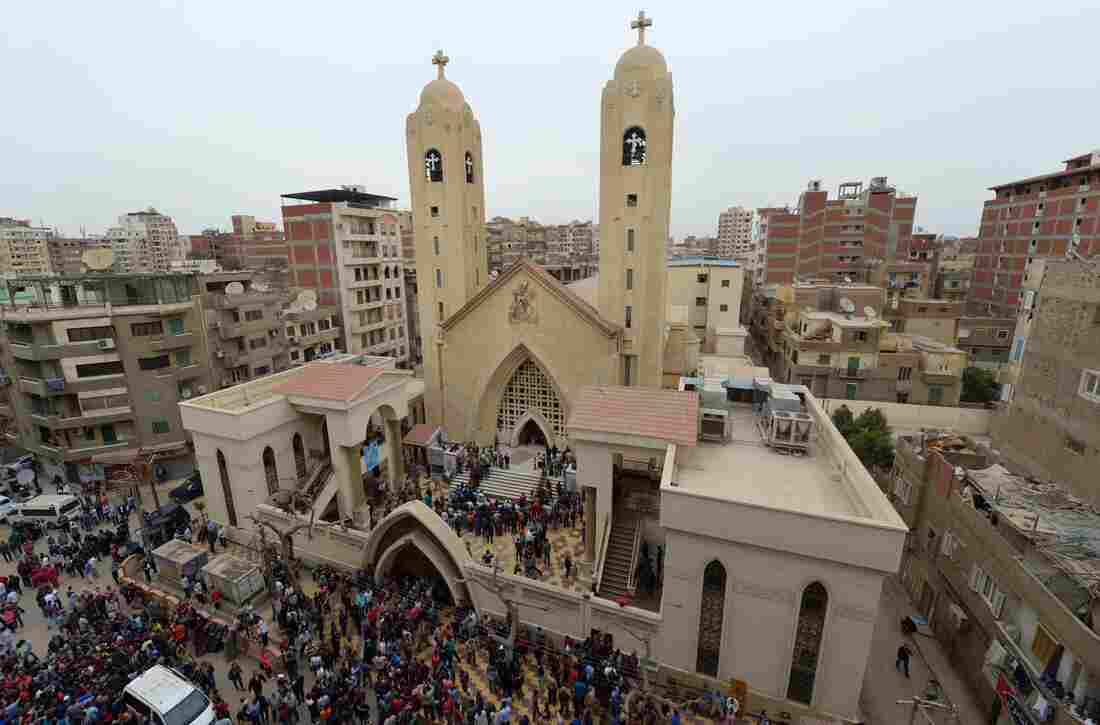 Relatives and onlookers gather outside a church after a bomb attack in the Nile Delta city of Tanta, Egypt on Sunday. Khaled Desouki/AFP/Getty Images hide caption 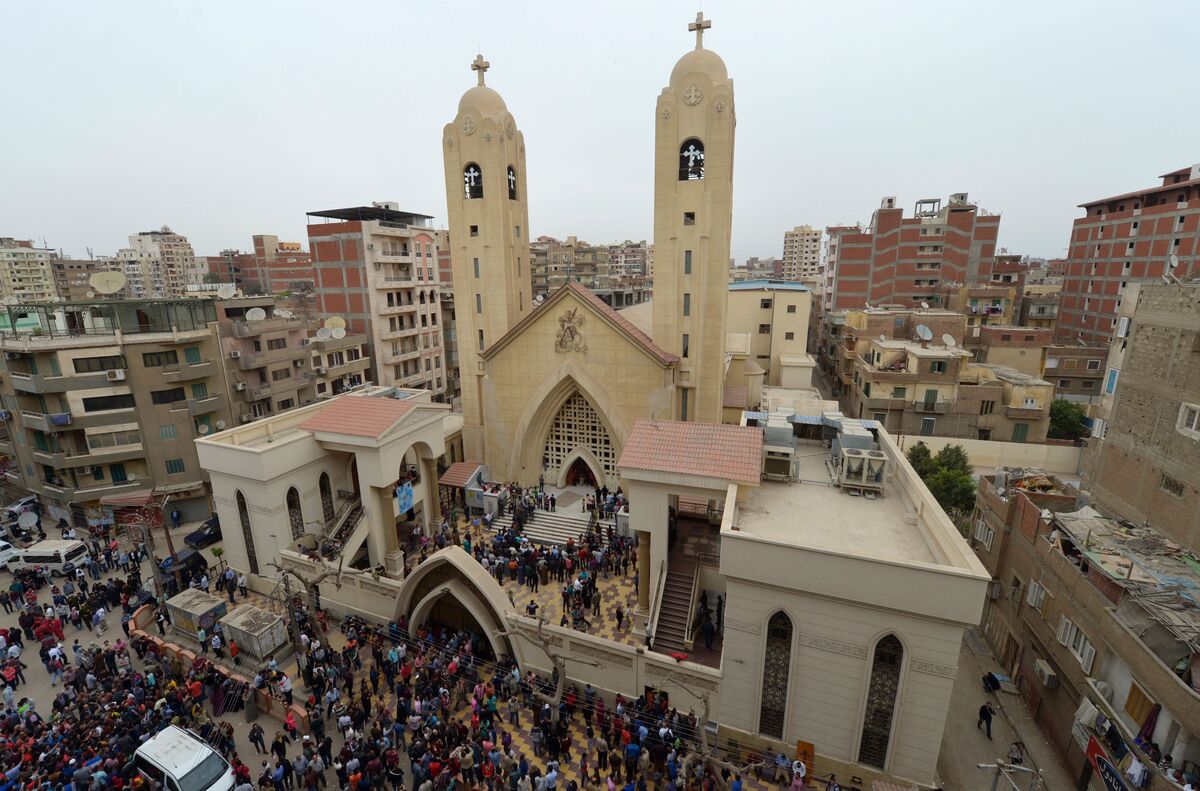 Relatives and onlookers gather outside a church after a bomb attack in the Nile Delta city of Tanta, Egypt on Sunday.

In a television address, Egyptian President Abdel-Fattah el-Sissi announced his intentions to declare a state of emergency.

"A series of steps will be taken, most importantly, the announcement of a state of emergency for three months after legal and constitution steps are taken," el-Sissi said during the live address.

Jane explains the announcement to our Newscast unit:

"...el-Sissi told Egyptians he was deploying more soldiers to protect public buildings and churches after the attacks.

"And he said he plans to impose a three-month state of emergency across the country. Parliament would have to approve the measure, which is already in place in Sinai province.

Condemnations of attacks came from the region and further abroad.

Both Israel and the Gaza's Hamas leadership decried the attacks.

Pope Francis, in his Palm Sunday Mass at the Vatican, mentioned the bombings and people who "suffer from wars and terrorism, from interests that are armed and ready to strike." He is scheduled to visit Egypt at the end of April.

And President Trump tweeted: "So sad to hear of the terrorist attack in Egypt. U.S. strongly condemns," while expressing his "great confidence" in el-Sissi. Trump had hosted el-Sissi at the White House last week.

Christians in Egypt have been targeted before in attacks by Islamist extremists. In December, 25 people died when a bomb exploded during Sunday mass in Cairo, as NPR's Bill Chappell reported. At the time it was "the deadliest attack on Egypt's Christian minority in years," he notes.

Two years ago, ISIS released a video appearing to show a mass beheading of 21 Egyptian Coptic Christians in Libya.

And on New Year's Day in 2011, a bombing at a church in Alexandria killed at least 21 people, as Jane noted.

Christians make up roughly 10 percent of Egypt's predominantly Muslim population and most Christians in Egypt are Coptic Christians, of the Coptic Orthodox Church.

Coptic Christians observe Palm Sunday and other religious holidays on a different schedule because they follow the Julian calendar, not the more widely accepted Gregorian calendar. Copts trace their ancestry back to the founding of the Church of Alexandria by St. Mark and are one of the oldest denominations in the Christian faith. The word "Copt" comes from the an ancient Pharaonic language and roughly translates to "Egyptian." The Coptic Church, with its own clergy and a distinct pope, holds similar beliefs with the other Orthodox churches, though it diverges in some teachings, most predominantly concerning the nature of Christ.

Ahmed Abuhamda contributed to this report.