Accessibility links
Catholics Build 'Intentional' Community Of Like-Minded Believers Nationally, Americans are growing disenchanted with traditional religion. But in a Maryland suburb, Catholics seeking more spiritual lives are banding together with others who share their values. 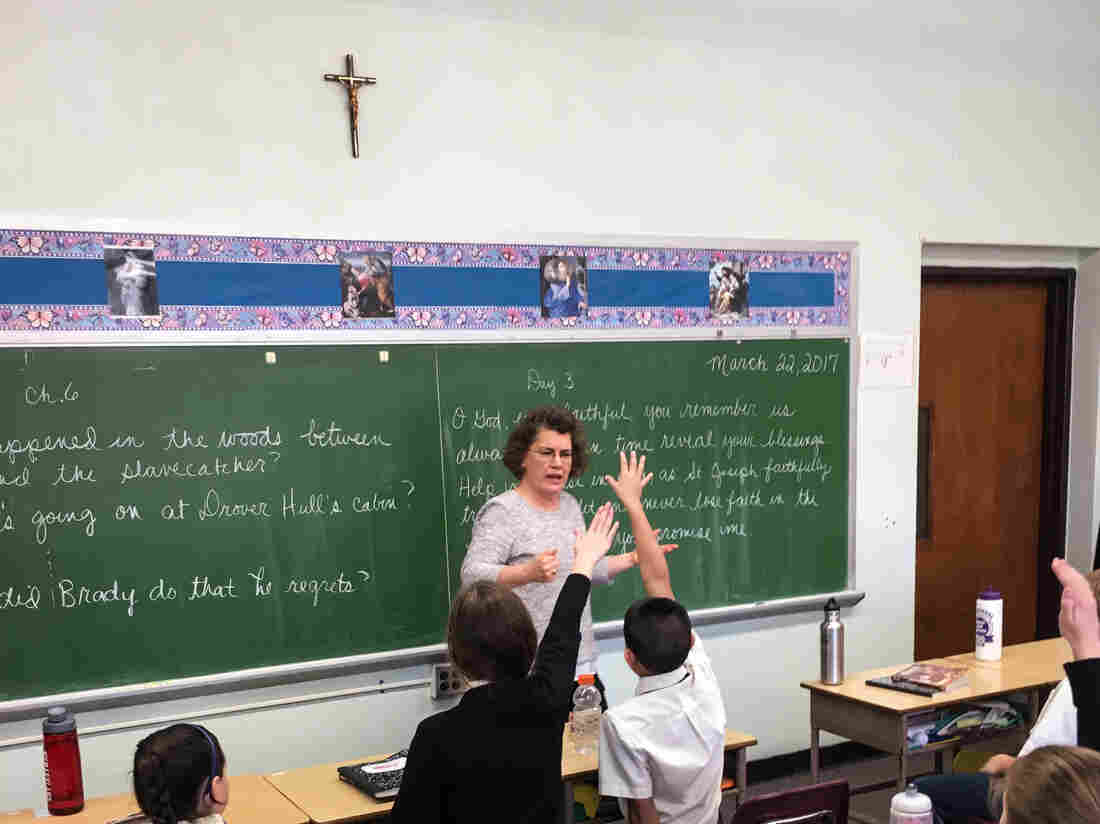 Amy Clayton teaches a fifth-grade history class at St. Jerome Academy in Hyattsville, Md. The school, which almost closed eight years ago, has experienced growth over the past few years, largely due to an influx of Catholic families who were drawn to Hyattsville by a desire to live among others who share their values. Tom Gjelten/NPR hide caption 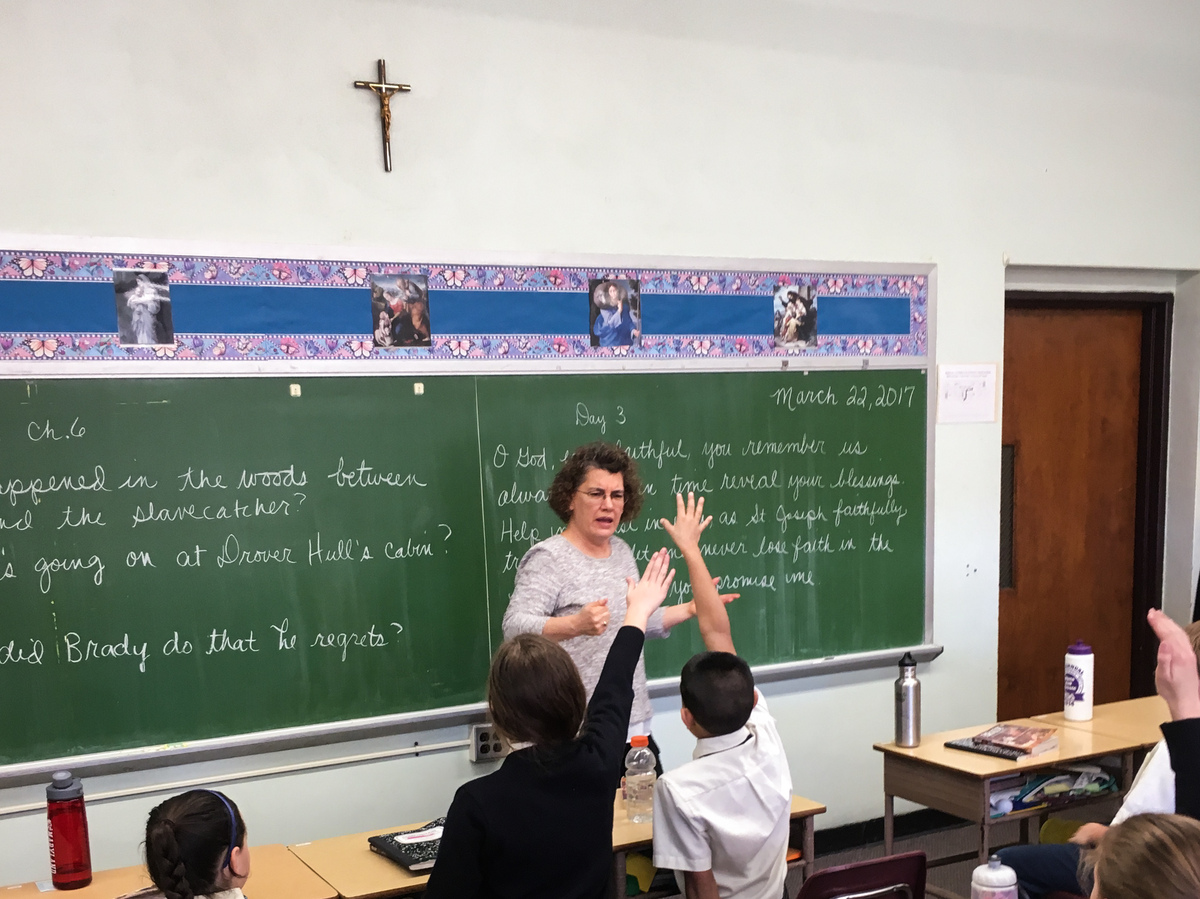 Amy Clayton teaches a fifth-grade history class at St. Jerome Academy in Hyattsville, Md. The school, which almost closed eight years ago, has experienced growth over the past few years, largely due to an influx of Catholic families who were drawn to Hyattsville by a desire to live among others who share their values.

At a time of declining church attendance across America and growing disenchantment with traditional religion, a Catholic parish in Hyattsville, Md., thrives by embracing the very orthodoxy other congregations have abandoned.

St. Jerome Catholic Church and its affiliated school, St. Jerome Academy, have both experienced dramatic growth over the past few years, largely due to an influx of families drawn to the parish's reputation as a haven for conservative Catholics seeking to live among others who share their values.

"The parish life was very important to us," says Daniel Gibbons, 40, who teaches at Catholic University in nearby Washington, D.C., and moved to Hyattsville with his young family four years ago. "I know from my own childhood that it can be very hard to raise children as a Catholic if you don't have a community of other Catholics who are trying to make the faith real in their everyday lives and raise the children in ways that are harmonious with their faith."

Been There: Lessons From A Shared Experience

Several of the new St. Jerome families previously had been home schooling their children, after disappointing experiences in both public and parochial schools.

"Faith-based education was very important to us," says Julia Dickson, 37, who moved to Hyattsville with her husband two years ago from a Baltimore suburb. "There was no [private] school that I felt was any different from a public school with a religion class tacked on," she says. "I wanted something with the Lord as the center of the entire day."

St. Jerome Academy, which almost had to close its doors eight years ago because of financial difficulties and low enrollment, experienced a dramatic turnaround after switching to a "classical" curriculum with a heavy emphasis on the history of Western civilization, taught always with reference to the Bible and the development of Christian faith.

The town of Hyattsville itself, with a population of barely 17,000, is also an attraction to these young Catholic families. Though located just beyond the D.C. limits, the historic community was established before the automobile age and is highly walkable. A key gathering spot is the Vigilante Coffee Roastery & Cafe, situated around the corner from the church and the school. Young mothers, many with babies in tow, congregate there each morning. The cafe manager is a former teacher from Los Angeles who also serves as the youth minister at St. Jerome.

'It's All About Church Closings': Catholic Parishes Shrink In Northeast, Midwest

Most of the families live within a 2-mile radius.

"Our kids are continually at each other's homes," says Michelle Trudeau, 48, a mother of six who home-schooled her four oldest children before enrolling them at the parish school, where she is now the assistant principal. "As parents, we know we can trust what's going on in that other house," she says. "We know that if something goes on with our kids, other parents are looking out for them. We all become parents of each other's children."

The tightness of the Hyattsville Catholic community developed deliberately, not accidentally. The key figure in its growth was Chris Currie, a former nonprofit executive who moved to Hyattsville 20 years ago and now serves as director of institutional advancement at the parish school.

"It started with me inviting people I knew to come here," he says. "My sister's family was the first to move here, followed by a couple of friends. Other families came here to become part of the foundation, and then by word of mouth people heard about it and came here because of the heightened community life." 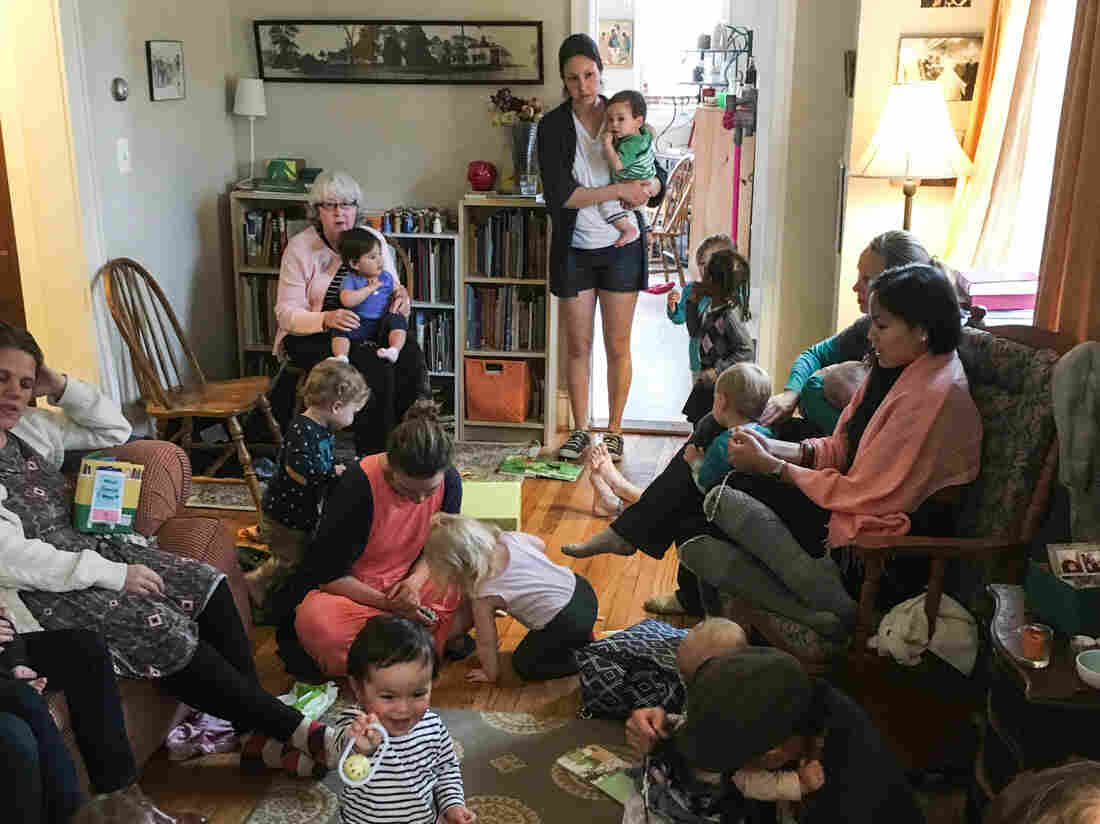 About a dozen Catholic women in Hyattsville gather each week to pray the rosary together. Tom Gjelten/NPR hide caption 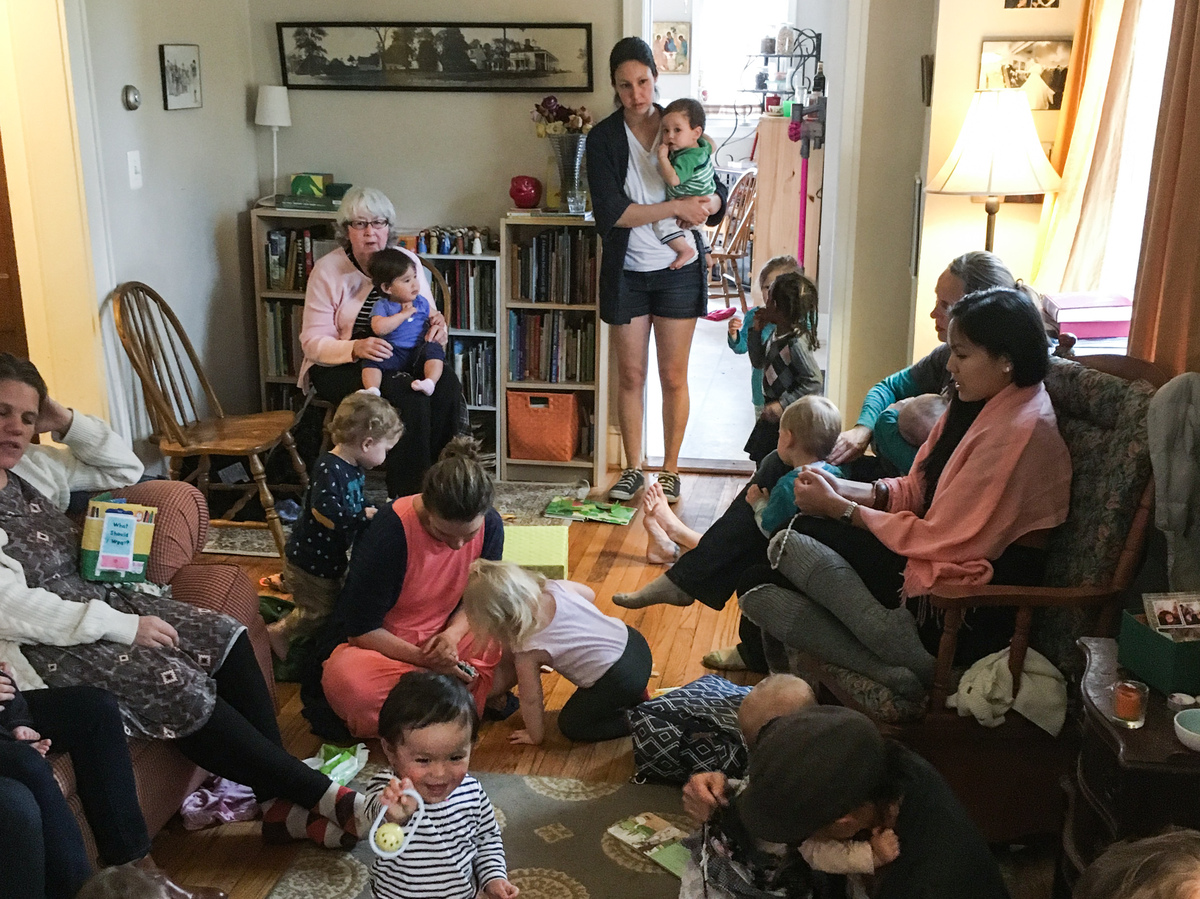 About a dozen Catholic women in Hyattsville gather each week to pray the rosary together.

As an "intentional" community centered on a parish and its school, Hyattsville came to the attention of Rod Dreher, a writer specializing in Christian culture. In his best-selling and widely discussed new book, The Benedict Option: A Strategy for Christians in a Post-Christian Nation, Dreher urges conservative Christians in America to withdraw from culture wars and partisan politics and focus instead on deepening their own faith through a semi-monastic life. Dreher's model is St. Benedict, the sixth century monk recognized as the founder of Western monasticism.

"We have to develop creative, communal solutions to help us hold on to our faith and our values in a world growing ever more hostile to them," Dreher writes. He describes the Hyattsville Catholic community in his book as "a strong model of being in the world but not of it."

In an interview with NPR, Dreher lamented the replacement of "traditional" Christianity with "pseudo-Christianity," which he described as "all about feeling good and happy about yourself."

"For a lot of people in modernity," Dreher said, "religion has become sort of a psychological help. It has become a way of rationalizing what we want to do anyway and putting a little Jesus sauce on top to make it go down easily."

There is little "pseudo" about the Catholicism lived in Hyattsville. Bible study groups meet regularly, and a dozen or more women in the community gather weekly to say the rosary together, a custom that has become rare among Catholics more generally. The women pray to the sound of crying babies and squealing toddlers.

"We're very open to life," explains 32-year-old Jane Murphy, who has three children under the age of 5. "In the Catholic Church, we don't believe in artificial contraception, and that results in a lot of babies!"

At U.S. Seminaries, A Rise In Millennials Answering God's Call

The community's adherence to official church doctrine also means the Hyattsville Catholics are increasingly in a cultural minority. They differ with many in the LGBT world, for example, over such issues as same-sex marriage, which the Vatican opposes.

"I think that what the church teaches about marriage is the best for family life," says Gibbons, the Catholic University professor.

Whether the community reflects Dreher's "Benedict Option" is a matter of some dispute, however, in part because many of the Hyattsville Catholics are deeply engaged in the broader society and say they do not feel marginalized, angry or alienated.

Many have advanced degrees and work professionally. Unlike other conservative Christians, they are not easy to categorize politically, having split their votes about evenly between Donald Trump and other candidates in the 2016 election. 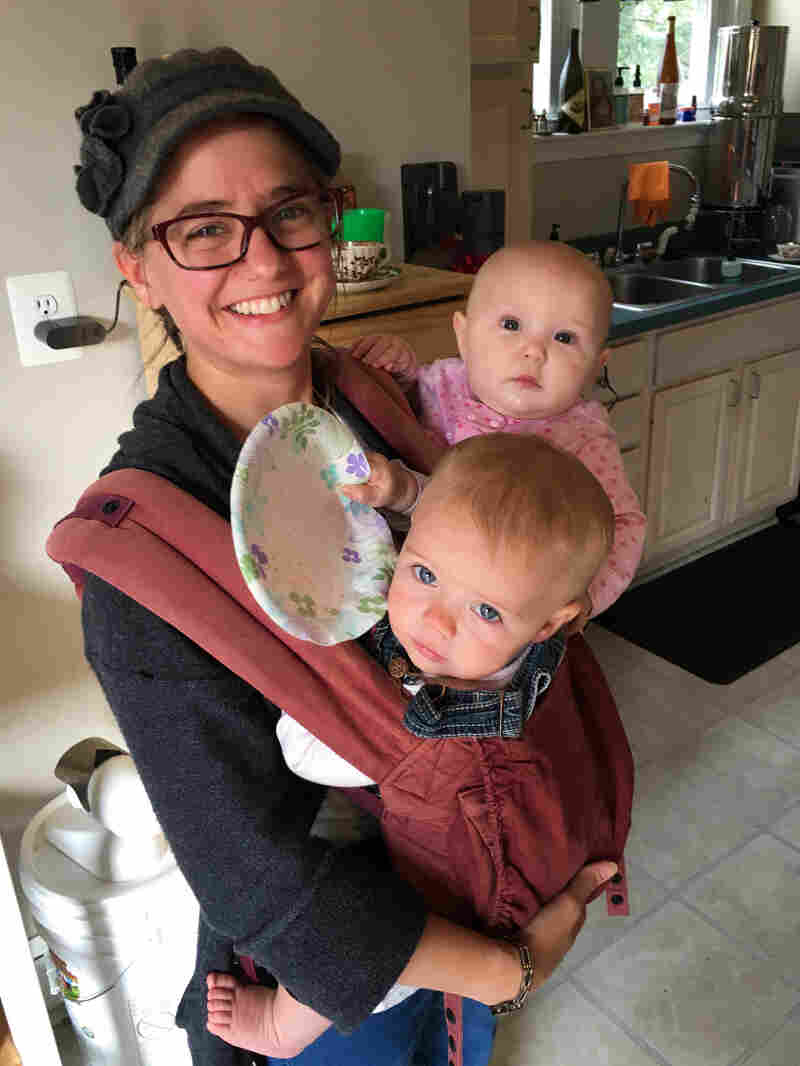 Jane Murphy (shown here with two of her three children), moved to Hyattsville with her husband to be part of the local Catholic community and send their kids to St. Jerome Academy. Tom Gjelten /NPR hide caption

Currie, the community founder, looks for comparison to the experience of the early Christians under Roman rule, when they thrived despite vicious persecution.

"They lived joyful lives, and they attracted converts by the example of their lives," he says. "I think that's what we're trying to do, live the way they did. Not live defensively, in sort of a paranoid xenophobic reaction to the rest of society, but to realize that we're all human beings created in the image of God, and to live that life ourselves and share it with our neighbors."

Critics say the risk in people choosing deliberately to live in a like-minded community is that it may not equip them well to deal with the challenges and opportunities of a pluralistic society, but the Hyattsville Catholics question that premise.

"For me personally," says Murphy, "living in this community has strengthened my faith so that I can go out to the wider community, the secular community, and talk with confidence about my faith. I can be accepting of other people but still be confident about telling them about my faith."

In an earlier Web version of this story, we said conservative Catholics split their votes about evenly between Hillary Clinton and Donald Trump. In fact, many non-Trump voters chose third-party candidates, not Clinton.