Accessibility links
Two Upcoming Special Elections In The House Have GOP Scrambling Races in Georgia and Kansas to replace GOP lawmakers who joined the Trump administration are surprising activists, pundits and both political parties in an unsettled political environment. 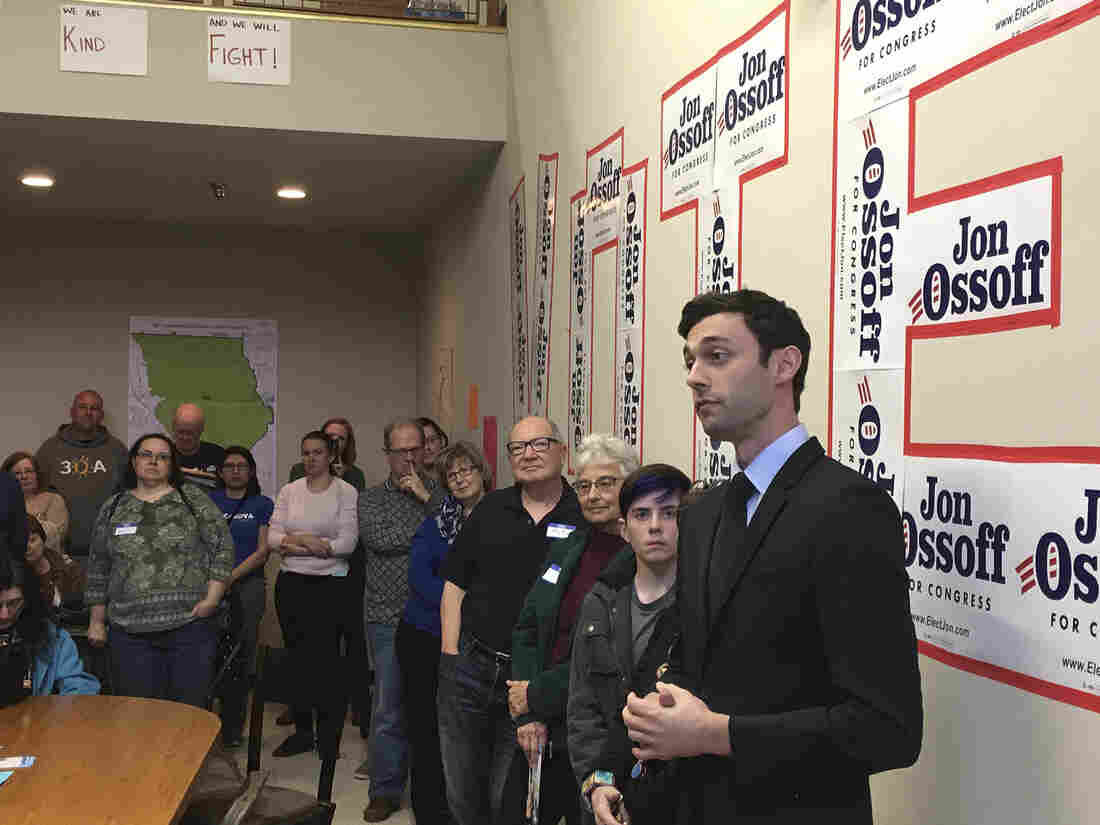 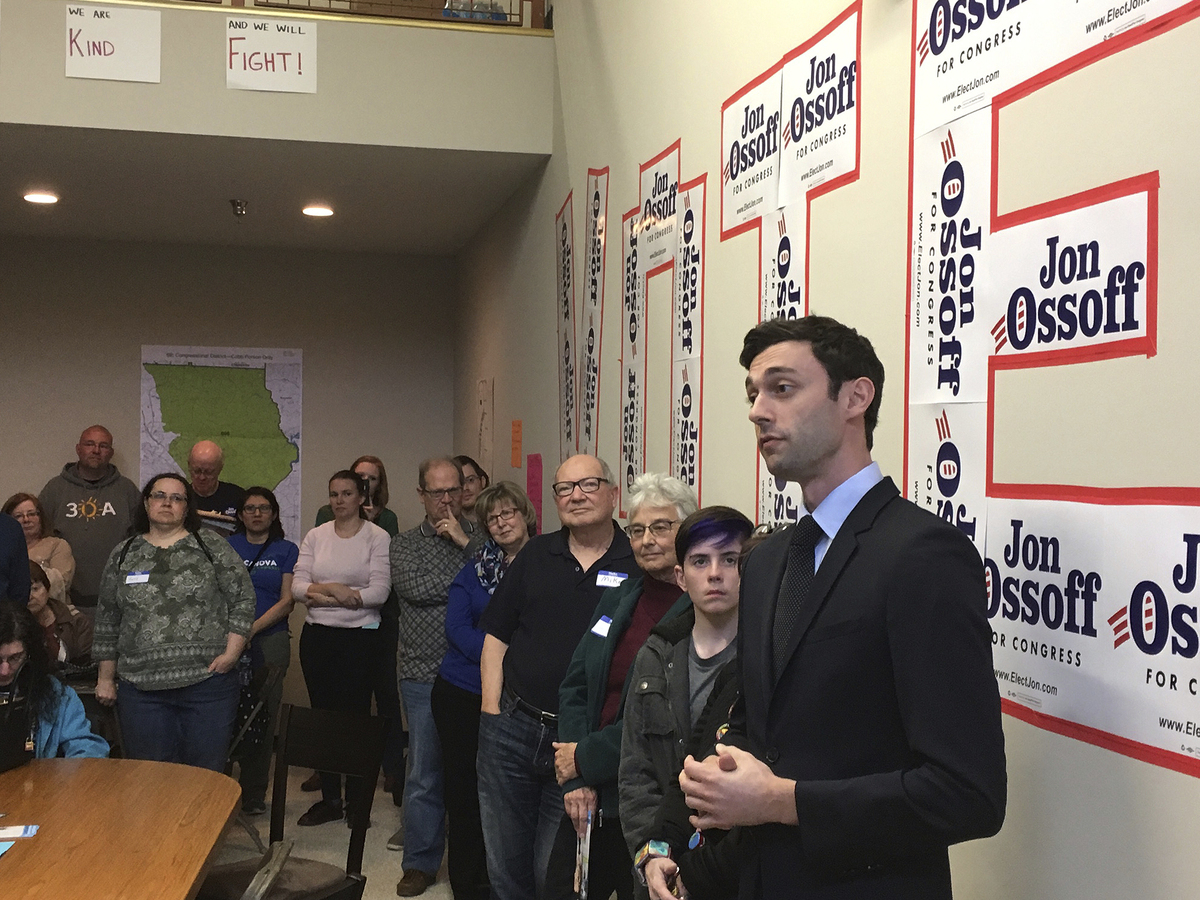 Democrats are hoping to prove that the growing opposition to President Trump is very real with an upset in one — or possibly even two — upcoming special congressional elections.

Their best chance is in Georgia's 6th District, where Republicans are scrambling to stop Democrat Jon Ossoff from winning the contest outright with a majority of the vote in an April 18 all-party primary.

But now there's growing concern over a previously sleepy race in Kansas to replace new CIA Director Mike Pompeo. Fearing a low-turnout election and an underperforming GOP candidate, Republicans are sending in their cavalry at the eleventh hour to prevent an upset in the race that's headed to the polls Tuesday.

That's still an unlikely outcome, but if Democrats keep the race in ruby red Kansas close, it could give them more momentum and optimism heading into Georgia the following week.

A 30-year-old documentary filmmaker and former congressional staffer, Ossoff has become a vehicle for the anti-Trump sentiment nationwide. He announced this week that he had raised an eye-popping $8.3 million in the race — an unheard of number for a congressional contest in such a short time. But 95 percent of that came from out-of-state donors, with the help of progressive blogs and celebrity endorsements.

Still, that money has allowed him to dwarf his opponents on air and build an impressive field organization that's put him just within reach of winning with a majority outright on April 18 — a nearly unthinkable feat in an 18-candidate field.

Republicans, at this point, just need to keep Ossoff below 50 percent and force him into a June 20 runoff, where they feel much better about the chances that one of several candidates who have emerged as top-tier challengers — most likely former Georgia Secretary of State Karen Handel, Johns Creek City Councilman Bob Gray, state Sen. Judson Hill or former state Sen. Dan Moody — would have against Ossoff then.

National Republican groups have poured about $4 million into the race to knock down Ossoff, looking to tie him to House Minority Leader Nancy Pelosi, D-Calif. — still toxic with the GOP base and a motivating factor to turn out their voters, Republicans say — at and to argue he's tried to embellish his national security credentials.

One ad last week from the Congressional Leadership Fund, a superPAC with ties to House leadership, went for the jugular by pointing out Ossoff's documentary company had received money from "Al Jazeera, a media outlet that has been described as a mouthpiece for terrorists."

This is the type of district that's primed for a possible upset — even though now-Health and Human Services Secretary Tom Price won re-election easily here time after time, Trump carried Georgia's 6th District by only 1 point last year after Mitt Romney won it by 23 points in 2012. This is the northern Atlanta suburbs — a growing, diverse and well-educated area, just like the places where Trump struggled mightily last fall.

With the GOP field fractured, Ossoff has been able to corral his considerable resources into a sizable advantage, and his best shot is to deliver a knockout punch and win the April 18 contest outright. If he's pushed into a runoff, and the race becomes a more traditional contest and GOP attacks have more time to permeate, winning Tom Price's old House seat looks much harder for Ossoff.

This contest on Tuesday is giving Republicans some late heartburn, as they're worried about a low-turnout contest, a depressed GOP base and an underperforming nominee.

Unlike the Georgia district up for grabs next week, the 4th Congressional District in Kansas, which includes Wichita, is one Trump won comfortably by 27 points. But the race has largely flown under the radar, and Republicans worry their base may not show up for GOP nominee Rob Estes, the state treasurer.

So in the eleventh hour, Republicans are now sending in their cavalry. The National Republican Congressional Committee went up with an ad last week hitting Democratic nominee James Thompson on his position on abortion rights, Vice President Pence has recorded a robo-call on Estes' behalf and Texas Sen. Ted Cruz — who won Kansas big in the state's presidential caucuses last year — will campaign with Estes on Monday.

Also working against Republicans is Gov. Sam Brownback's unpopularity in the state, and Thompson has tried to tie Estes to the governor.

Ultimately, the late help will still probably be enough to pull Estes over the finish line on Tuesday, and there's been no major late surge of interest by national Democrats in the race that would signify that they have a real chance of pulling off an upset. In fact, the state party turned down requests from Thompson for help last month.

But a closer-than-expected result could only give Democrats more momentum and optimism heading into Georgia the following week.

Is Montana next on upset watch?

If there's an upset in Georgia and if the Kansas contest is close, expect progressive activists to turn their sights to this May 25 contest between Republican Greg Gianforte and Democrat Rob Quist to become the state's lone representative in the House. 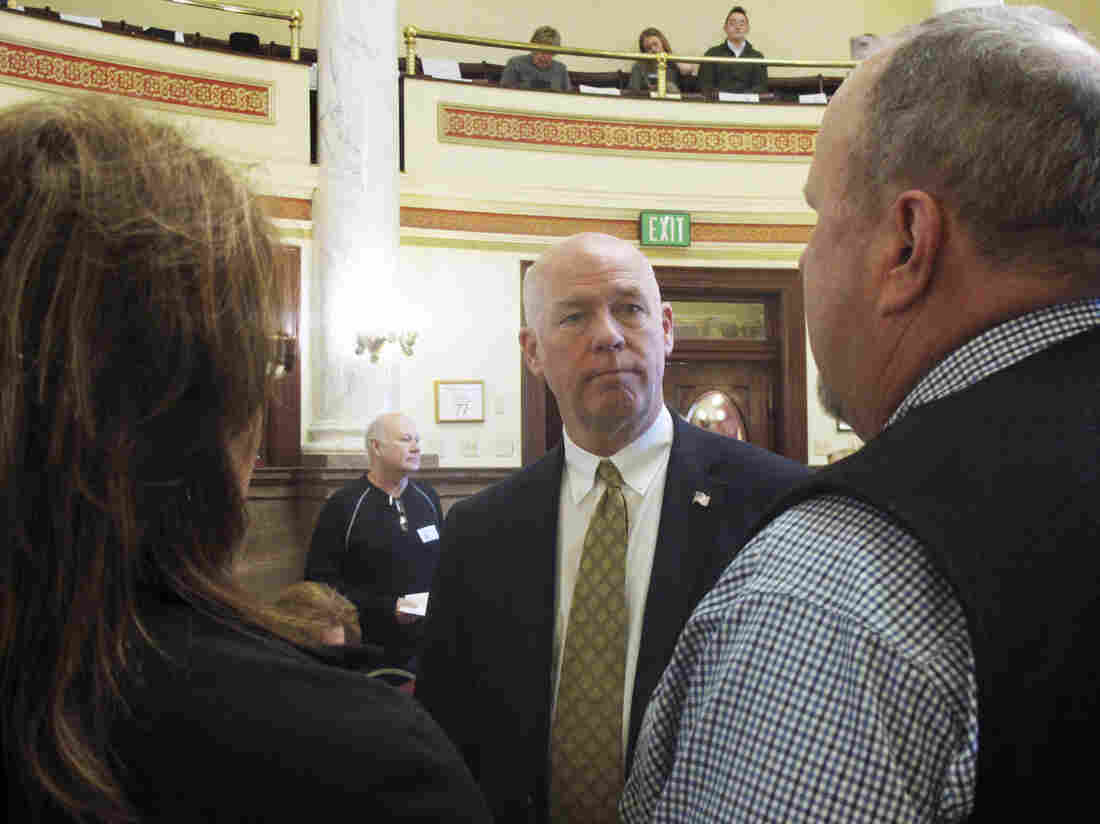 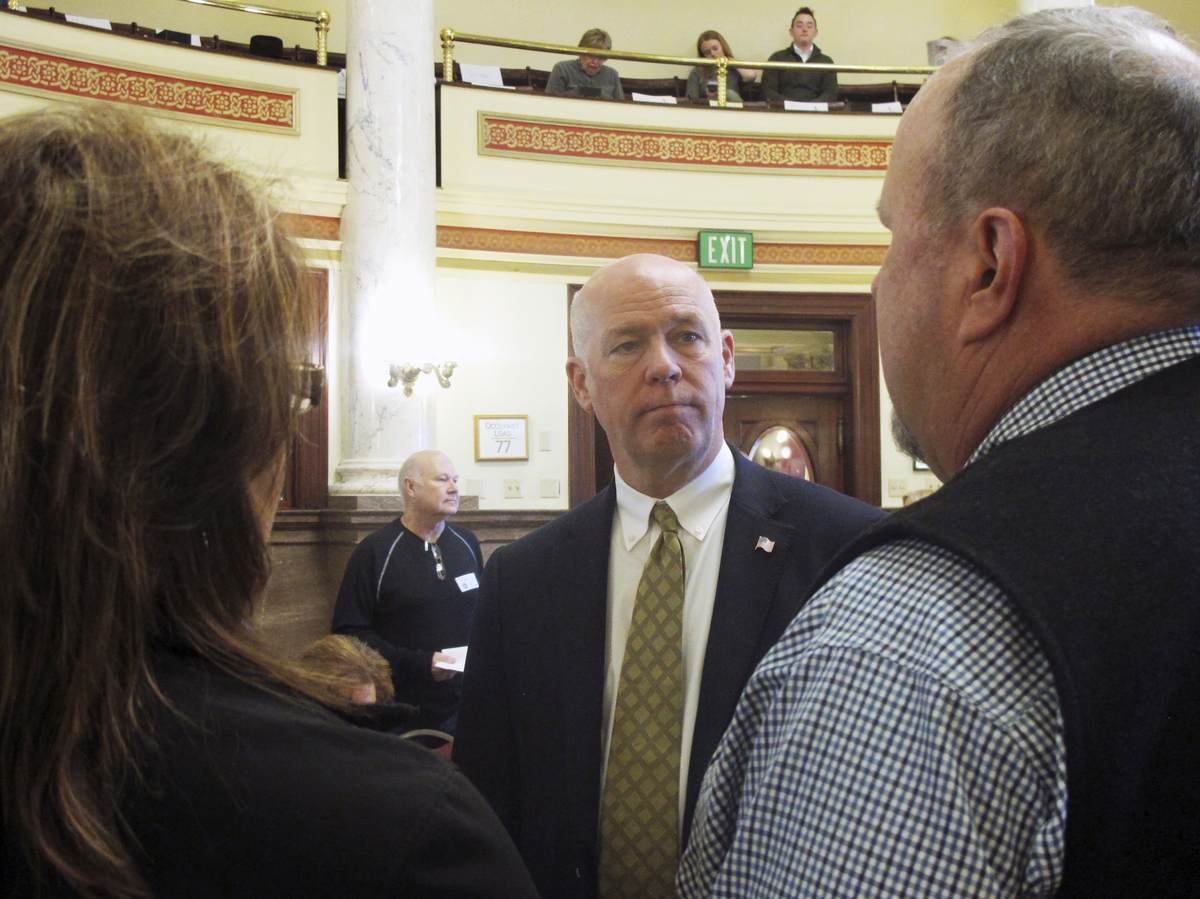 Democrats have been able to break through in the state's gubernatorial and Senate races (though Sen. Jon Tester is a top target in 2018) but they haven't held the state's only House seat in almost two decades.

And without a significant late shift toward Quist, Gianforte, a wealthy software executive who ran unsuccessfully for governor last year, still looks poised to win.

Progressive groups such as the Daily Kos and Democracy for America have looked to boost Quist, a banjo-playing folk and bluegrass singer who has written his own campaign song. The Democratic nominee, who's making his first run for office, has jabbed at Gianforte for keeping a low profile while Quist has held town halls across the state.

Quist, however, has his own problems with tax liens, which he has blamed on medical costs and insurance prices, according to Montana Public Radio. The GOP superPAC Congressional Leadership Fund has already hit Quist with $700,000 in attack ads, too, painting him as too liberal.

Ultimately, the GOP-lean of the state which Trump won by 21 points and Gianforte's deep pockets still looks like too much for Democrats to overcome. But, like Kansas, this one could take on a life of its own late in the game.

If Democrats are able to pull off wins in any of these contests, the party will be crowing that this spells doom for President Trump and Republicans in the 2018 midterms. And, to be sure, it would be a devastating blow for any House seat this early on in Trump's already-struggling presidency to switch hands — especially ones previously held by his Cabinet members.

Ultimately, House special elections are snapshots in time — and right now Democrats need to be able to prove their opposition to Trump, with protests and marches, isn't just all talk and no results. Winning one of these races would prove they can turn their grass-roots' anti-Trump sentiment into real blowback at the ballot box.

But it's also not a guarantee of future success, and if Ossoff wins, for example, he'd start out with a target on his back in 2018, when the weird dynamics of a multicandidate field aren't in play and he'd have much more trouble raising millions of dollars if he isn't the only game in town.

However, if Ossoff doesn't win, that isn't a signal, either, of Democratic fortunes in 2018. Democrats have plenty of other targets beyond Georgia's 6th District to put the House in play, as well. Midterm elections of a first-term president are a referendum on the commander in chief, and if Trump's approval continues to sink and his administration continues to be mired in controversy, there will by myriad opportunities for Democrats.

California and South Carolina: the other races

Beyond that trio of more compelling contests, there are two other vacancies still to be voted on. The 23-way California contest to succeed now-state Attorney General Xavier Becerra in California's 34th Congressional District was whittled down April 4, with Assemblyman Jimmy Gomez and Los Angeles Planning Commissioner Robert Lee Ahn advancing to a June 6 runoff.

Progressive groups had hoped to get one of their favorite candidates through in this Los Angeles district where Vermont Sen. Bernie Sanders beat Hillary Clinton in the Democratic primary last year. But with that vote splintered, Ahn was able to edge through, benefiting from a growing Asian population in the district.

Gomez was the front-runner to begin with, and probably remains as such in the runoff. He raised the most money of any candidate in the race and has secured endorsements from many Democratic insiders, including Becerra.

In South Carolina, whoever wins the GOP nomination in the 5th Congressional District will be a near-lock to succeed White House Office of Management and Budget Director Mick Mulvaney.

The overwhelming number of votes in this race will come from York County, the largest area of the district that's seen a boom as a growing suburb of Charlotte. Former state Rep. Ralph Norman, whose family owns a major real estate development company in the area, already has a base in the area, and he resigned from the Legislature to focus on the race. State House Speaker Pro Tempore Tommy Pope represents part of the district's base in Columbia, too, and he already has name recognition in the state from being the lead prosecutor on the high-profile 1994 case of Susan Smith, the mother who was found guilty of drowning her two young sons in a car.

The primary is on May 2, and Republicans in the state say Pope and Norman have the best chance to advance to a likely May 16 runoff if no candidate gets a majority. But former state GOP Chairman Chad Connelly, who was faith engagement director for the Republican National Committee, has run a strong campaign too and could pull in votes from heavily evangelical voters.

Ultimately, the GOP primary is shaping up to be a contest about who's the most conservative, and don't expect to see candidates shirk away from Trump as they play up their praise of Mulvaney. Whoever wins the nomination will be the heavy favorite come June.

Democrats haven't held the seat since John Spratt, the then-Budget Committee chairman, was defeated by Mulvaney in 2010, and the seat has only gotten more Republican since then, voting for Trump by almost 20 points.