Accessibility links
Book Review: 'Where The Water Goes,' By David Owen In Where the Water Goes, David Owen uses the history of the Colorado River to lay out the immense complexity of America's water situation, reminding us that both water and time are finite resources.

'Where The Water Goes' Is Effortlessly Engaging — And Also Scary

'Where The Water Goes' Is Effortlessly Engaging — And Also Scary 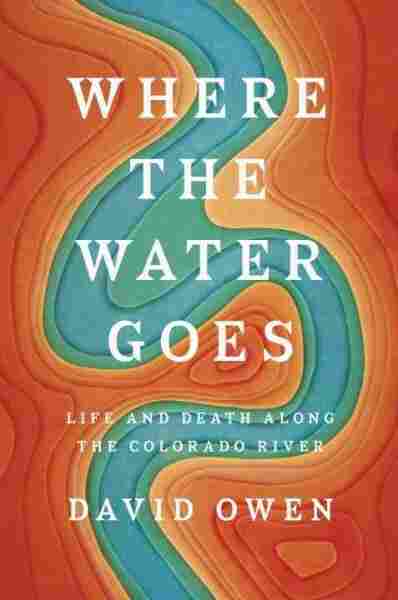 Where the Water Goes

Life and Death Along the Colorado River

"Water is never only about water."

A few years ago, at one of Hoover Dam's scenic pull-offs, I stood beside a handful of strangers looking out over Lake Mead. The dam was impressive, but all I could see was the pale ring of bare rock that betrayed how low the water had fallen. Everyone around me was quiet; I thought they were bored until a woman whispered, "So that's it?" and I realized we were terrified.

We were right to worry. In Where the Water Goes, David Owen notes "the lake today contains only about thirty-eight percent as much water as it did in 1998," and it will only get worse: Contrary to American ecological inertia, water's a finite resource. It's a particularly pressing concern for the Colorado River, legislated so intensely by water-rights claims that more of its water is spoken for than actually exists.

Water availability is a primary environmental concern of our age. It was a determining factor in development of the American West, from the forced displacement of Native American nations to the establishment of the Colorado River Compact across seven states and Mexico. That "Law of the River" has shaped the policy and practicalities of the West, and Where the Water Goes traces all 1,400 miles of it, trying to understand how fragile a web we've woven.

It's a staggering glimpse of just how complex the situation is — and how long the river has been a concern. In 1893, long before "conservation" had anything but economic implications, geologist John Wesley Powell warned the National Irrigation Congress, "When all the rivers are used ... when all the wells are sunk or dug that can be dug, there is still not sufficient water to irrigate this arid region." (Owen notes dryly: "He was booed.") And while we laugh at 19th-century blowhard Horace Greeley's assertion that "rain follows the plow," the current administration is rolling back environmental protections with similarly inaccurate bluster. The reality is something else entirely, and Where the Water Goes is, if nothing else, a crucial admission of the mess we're in.

Some of the ways people have tried to negotiate the desert are ludicrous (golf courses), and others are downright science-fictional: Wyoming shot silver iodide into the sky to make rain clouds, and Jefferson Davis imported camels for desert transport. Occasionally a data point just reads like dystopia — in the 1990s, Phoenix and Tucson essentially paid farmers to use Colorado River water they didn't need, just so California couldn't claim water rights and take it. But there are other, more subtle problems that aren't so easy to pin down — agriculture, residential waste, and power sources are delicate tangles, involving concerns about invasive species, expediency vs. long-term results, and unintended consequences that might only be visible too late.

Owens is effortlessly engaging, informally parceling out information about acre-foot allotments alongside sketches of notable, often dreadful figures in the river's history.

Owens is effortlessly engaging, informally parceling out information about acre-foot allotments alongside sketches of notable, often dreadful figures in the river's history. And though his sympathies are clear, he doesn't shy away from the reality that these problems resist simple solutions; every data point raises new questions, and governments, activists, and old guard are only beginning to work together to answer them.

Where the Water Goes doesn't pretend to solve the problems Owen acknowledges are overwhelming and, in some ways, impossible. It's a restless travelogue of long-term human impact on the natural world, and how politics and economics have as much to do with redirecting rivers as any canal. But with its historical eddies, policy asides, and trips to the Hoover Dam, at heart Where the Water Goes is about water as a function of time, and a reminder that we're running out of both.