Accessibility links
Nearly 40 Years Later, Jonestown Offers A Lesson In Demagoguery In 1978, more than 900 followers of the Rev. Jim Jones committed mass suicide in Guyana. In his new book, The Road to Jonestown, journalist Jeff Guinn details how Jones captivated so many. 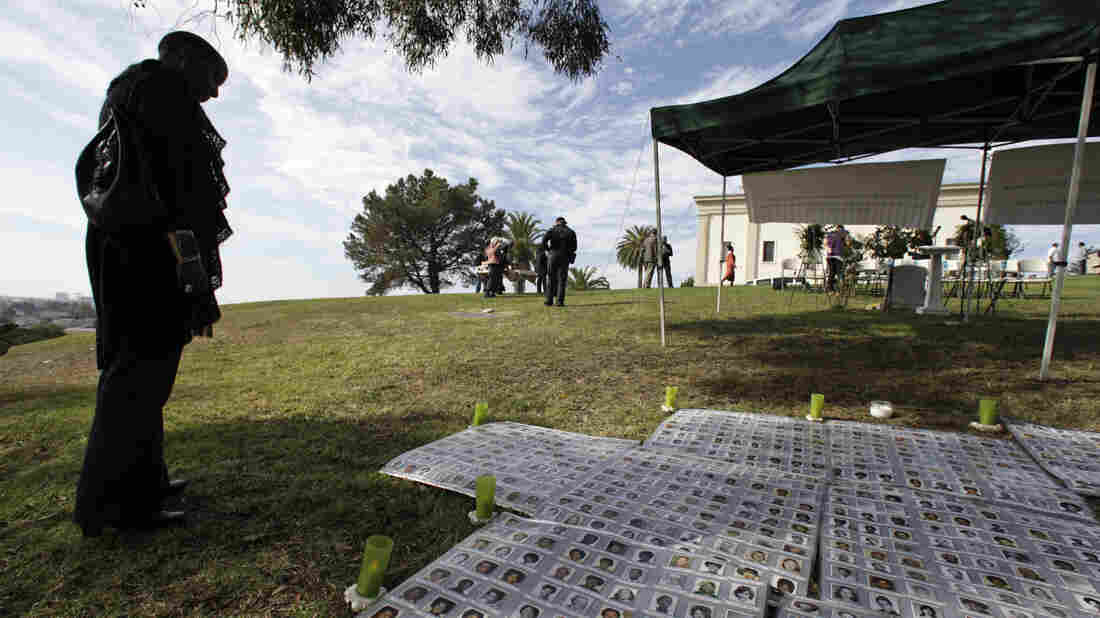 A 2010 memorial service for the Jonestown massacre in Oakland, Calif., featured photographs of the victims. Eric Risberg/AP hide caption 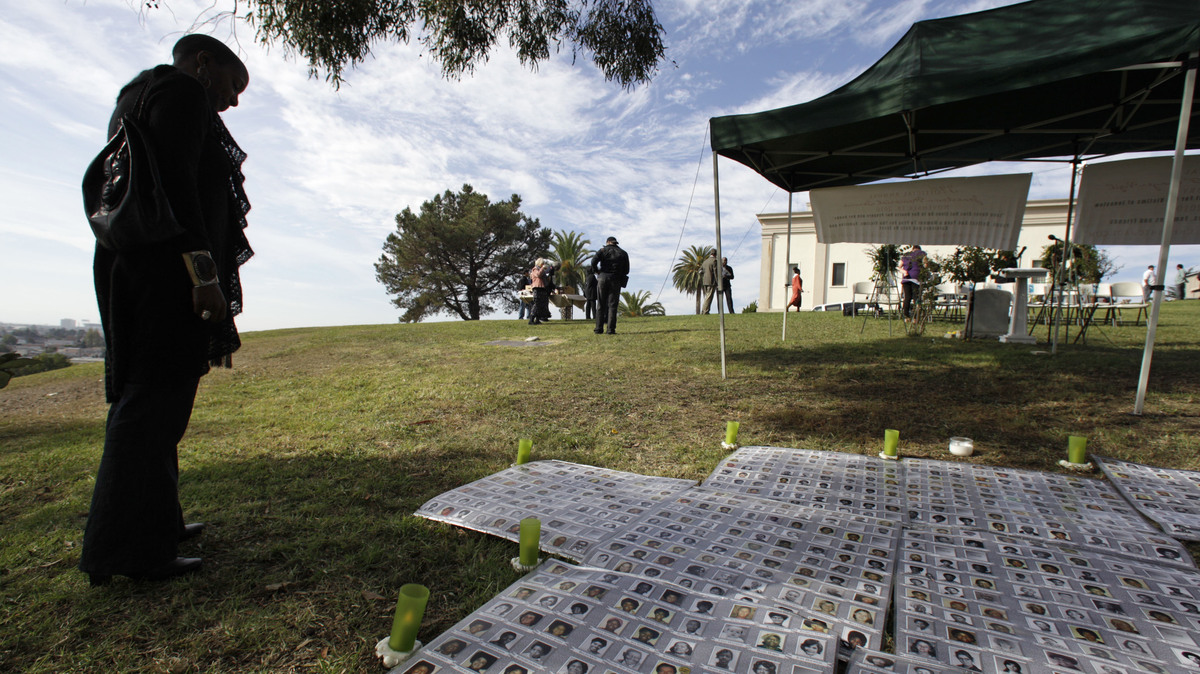 A 2010 memorial service for the Jonestown massacre in Oakland, Calif., featured photographs of the victims.

On Nov. 18, 1978, an itinerant preacher, faith healer and civil rights activist named the Rev. Jim Jones led more than 900 of his followers to kill themselves by drinking cyanide-laced Flavor Aid at their Jonestown settlement in the jungle of Guyana. Nearly 40 years later, questions still linger regarding the Jonestown massacre and the man who inspired it.

Journalist Jeff Guinn details how Jones captivated his followers in his new book, The Road to Jonestown. He calls Jones a "tremendous performer" who exhibited "the classic tendencies of the demagogue."

Guinn says Jones, who founded Peoples Temple church, would take current events and exaggerate them to create a sense of fear and urgency. He drew his followers to Guyana by convincing them that America was facing imminent threats of martial law, concentration camps and nuclear war.

Father Cares: The Last Of Jonestown

After claims of abuse in Jonestown surfaced, Rep. Leo Ryan, D-Calif., came to Guyana to investigate. A number of Jonestown residents sought to return to the U.S. with Ryan, but others opened fire on the delegation, killing the congressmen and four others. The mass suicide followed.

Guinn says the lessons of Jonestown still resonate today. "Jim Jones epitomizes the worst that can happen when we let one person dictate what we hear [and] what we believe," he says. "We can only change that if we learn from the past and try to apply it to today."

On the idealistic side of Jones' Peoples Temple church

Jim Jones originally organized Peoples Temple as a storefront church in Indianapolis in the late 1940s and early 1950s. It became one of the first major mixed-race churches in that part of the country, and Jones was instrumental in integrating Indianapolis, which had been one of the most segregated cities in America. They later moved to California.

The purpose of Peoples Temple, as stated, was to feed the hungry, clothe the needy, ostensibly to try to raise up all the people who had been left out by society. Privately, within their organization, within their meetings where no outsiders were allowed, they also talked about what they were trying to do was set a "socialist example," everyone treated the same, where race, money, nothing mattered. Human dignity was at a premium. 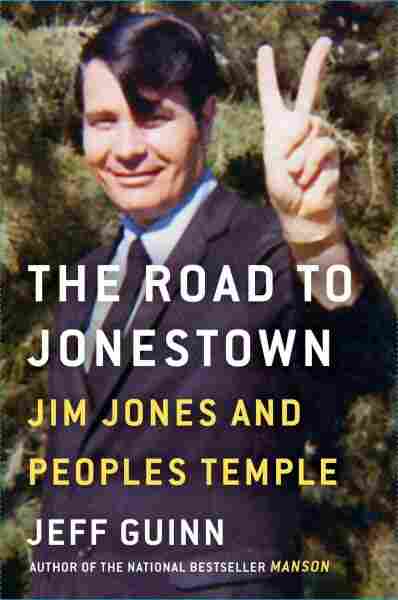 The Road to Jonestown

Instinctively he understood the things that he would need to do in front of a crowd, not just to get their attention, but to hold it and be remembered by them. ... He would [fake] being able to summon cancers from people's bodies, which were actually rotten chicken parts that he would have planted earlier.

And even then, as he starts to gain a following through these apparent miracles, he has a number of followers who are well aware [that] it's a trick. But they tell themselves Jim is doing what he has to do to bring people in for the greater good, because at the same time he's ... tricking people, he's also out there working for integration, for civil rights, for women's rights, and that is his argument: "I need to do whatever is necessary to get people into the cause. After that we can all accomplish great things."

On how Jones targeted poor people to join his following

The whole idea was that they would distribute these fliers, not in the well-to-do parts of town; they would go into the ghettos, into the public housing, where people have absolutely nothing. He understood that when you believe life is almost hopeless, that's when you're most ready to buy into some miracle that might lift you up. ...

The people who followed Jim Jones, many of them, [were] intelligent, socially conscious, ready to work hard to make the world better, and ultimately he sacrificed them to his own ego and his own belief in himself. That is unforgivable.

On Jones orchestrating a mass suicide of his followers

By the end in November 1978, Jones' attitude towards his followers had changed. In the early stages of his ministry, when actually great things were often being accomplished, he thought of himself as the shepherd guarding his flock. More and more over the years, as his paranoia increased, as his drug use increased, he began to think of himself at war with almost everyone in the outside world — the United States government, all kinds of secret forces. ...

At the end he saw himself as a general, and his followers were his troops, and ... Jones made the decision that there must be one last great gesture so that his name would live in history ... [and that it] would require the deaths of his followers. ...

If Leo Ryan, the congressman, had not come to Jonestown there still would've been some event at this point that would've triggered Jones' order to everyone to commit a "revolutionary act," as he called it. He tried to convince them it wasn't suicide, it was something much grander than that.

On trying to understand how 900 victims agreed to the suicide

One of the things that's hardest for us to understand now, looking back almost 40 years, is how almost 900 people ... could have followed what appeared to be ridiculous orders from an obvious demagogue to kill themselves — but it's much more complicated than that.

First of all, not everybody in Jonestown that day did agree to die, to drink the poison. ... Out of over 900 human beings, 300 children, many of them infants, they have no choice. Their parents are making the choice for them.

Then, we have another third, who are elderly people, who aren't in the best of health, who if they don't follow Jim Jones' orders are going to be left out in the deepest, densest, most dangerous jungle in the world. Their choices essentially are die quickly or die long, lingering deaths.

In the middle you have the adults, the younger people, and even among them there's no unanimity. Some do believe that Jim Jones is God or something close to God and they worship him and if he says "do this" they're going to. Others don't believe Jones is a god, but they believe in their cause, and they have bought into his preaching that the rest of the world is coming in to get them.

The Guyanese troops that came in the next morning thought they were going to be facing armed revolutionaries. They guessed there might be 100 or more Jonestown men armed with rifles waiting for them, so they're coming through the jungle cautiously.

It's the hot season in Guyana. There's been a torrential downpour the day before and steam is coming up from the floor of the jungle. It's almost like fog. And so they're coming into Jonestown in the perimeter expecting to be attacked any minute. They've got their guns up and ready, the fog, the steam is in front of them, they can hardly see.

All of a sudden they start to stumble and they think that maybe these revolutionaries placed logs on the ground to trip them up, and now they're going to start shooting from ambush — and then a couple of the soldiers look down and they can see through the fog and they start screaming, because there are bodies everywhere, almost more than they can count, and they're so horrified.