Accessibility links
New 'Mystery Science Theater' Coming To Netflix In The Not-Too-Distant Future The show originally aired in the '90s and helped spawn the entire attitude of the Internet. Sure, it had a silly premise — but it also had a cult following. The reboot's first season drops on Friday. 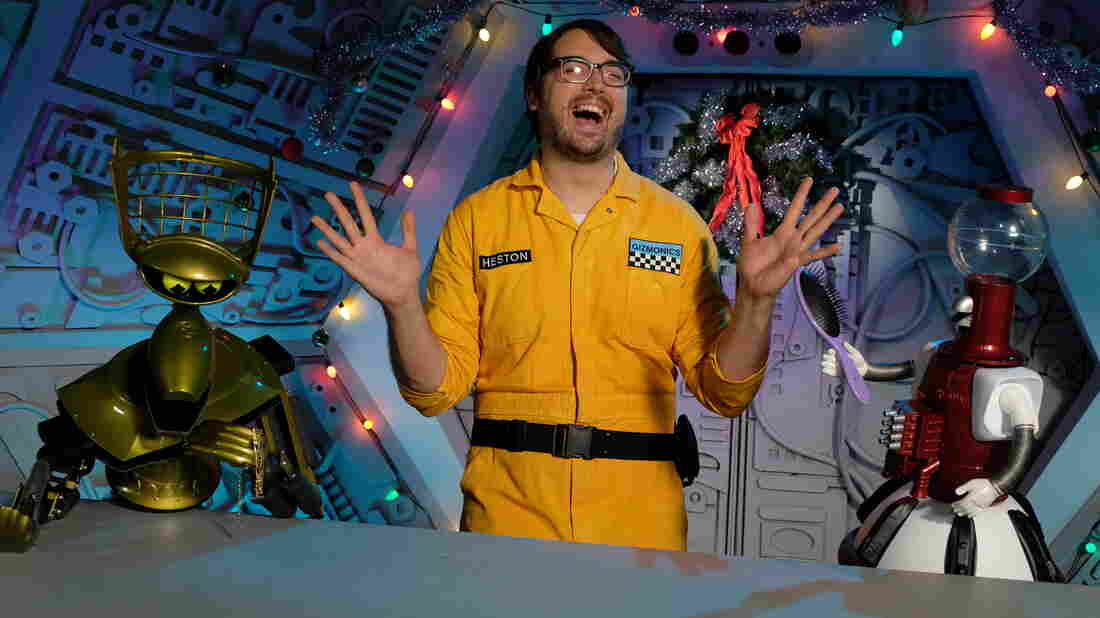 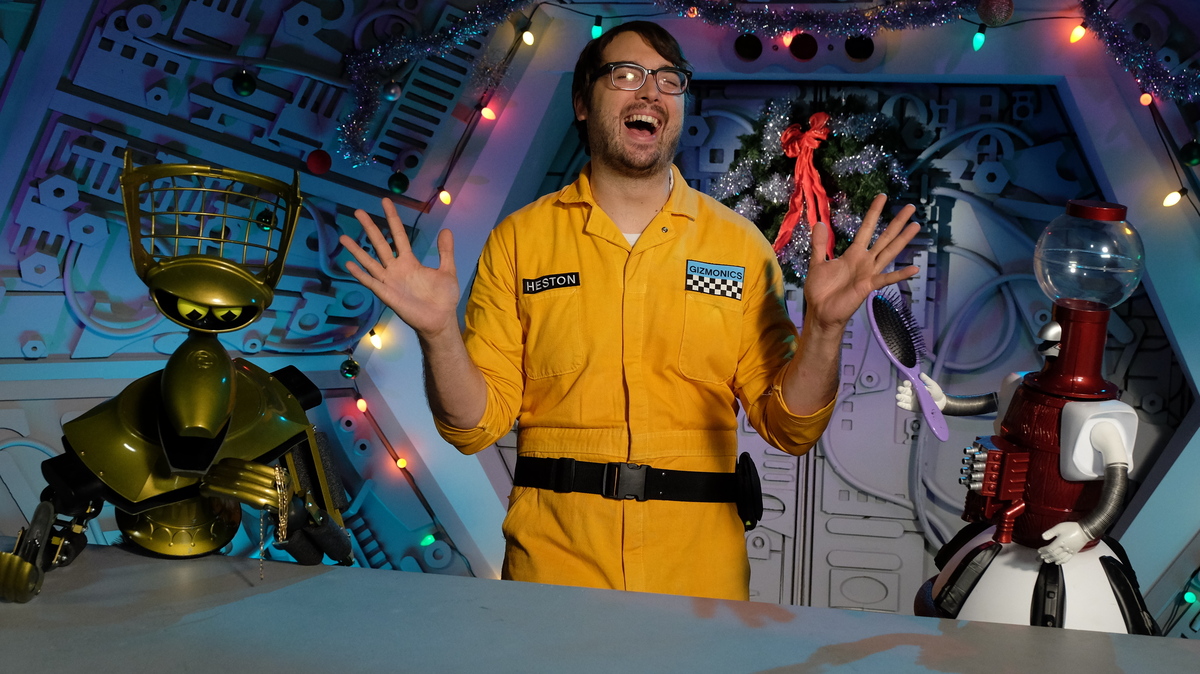 You can expect more Crow and Tom Servo, as well new faces like Jonah Ray, in the new Mystery Science Theater 3000.

Here's the setup: Mad scientists send a guy (Joel) into space and force him to watch cheesy movies. He can't get back home because he's used parts from his spaceship to build two robots whose commentaries make the movies bearable.

Sure, Mystery Science Theater 3000 had a silly premise — but it also had a cult following. The show aired in the 1990s and helped spawn the entire attitude of the Internet, where nothing is off limits from being mocked. MST3K eventually came to an end, but now, to the delight of millions, it's back.

The show was the brainchild of Joel Hodgson, a prop comic from Wisconsin who made a few appearances on Saturday Night Live. His combination of stoner absurdism and Midwestern nice proved perfect when he got the chance to start his own show on the UHF channel KTMA. Making fun of dumb movies with your friends is a time-honored tradition, but with MST3K, your friends were much funnier.

The program got picked up by Comedy Central, where it ran for six seasons, then moved to the Sci-Fi Channel for another three. In the middle of all that, in 1993, Hodgson left over creative differences and a new host took over.

"It was really like a tragedy for me the way it worked out," he says. "It was like the most public, frustrating thing I could imagine. And so that took a really long time to grapple with. And then once I started to get more distance from it, I started to kind of feel like it could happen again."

In the meantime, the show acquired such fans as Frank Zappa, Questlove from The Roots, Al Gore and Jonah Ray, a stand-up comic who hosts a parody travel show called Hidden America. Ray grew up watching MST3K. He says, "Mystery Science Theater was someone I could watch old sci-fi movies with and make fun of them by myself. You know, essentially you have these friends with you while you're by yourself. And I think that's why it connects with people."

A lot of people. When Hodgson got the rights back and launched a Kickstarter campaign to produce a new season, it broke the crowdfunding site's record for video projects, raising more than $5.5 million. Super fan Jonah Ray got the call of a lifetime when Hodgson asked him to be the new host. 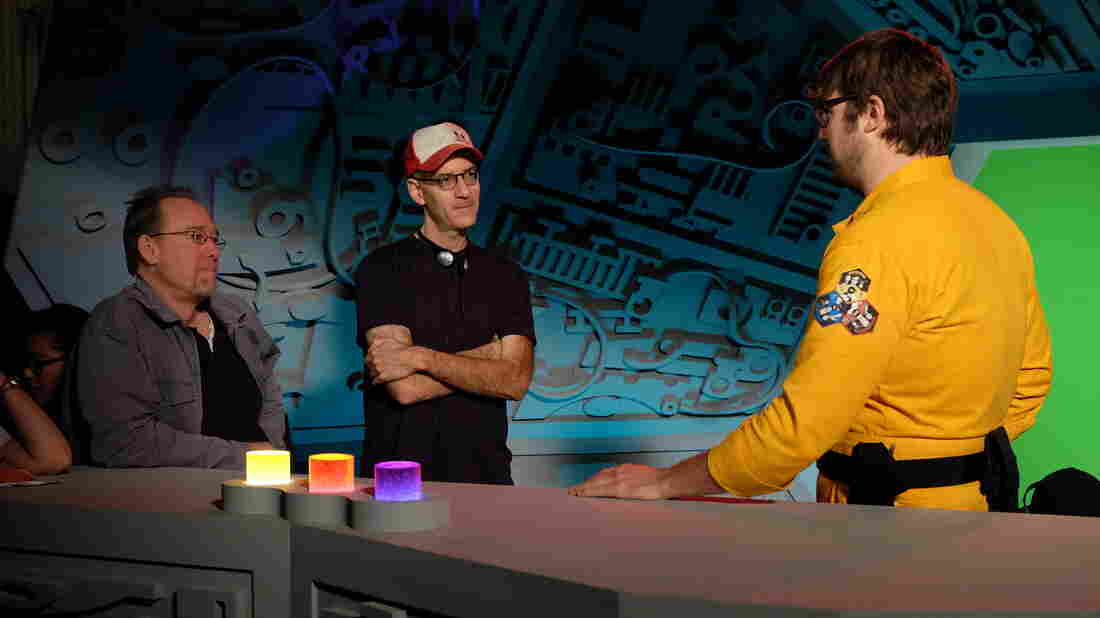 Hodgson and writer/producer Robert Cohen check in with Ray on the set of the new Mystery Science Theater 3000. Darren Michaels/Courtesy of Shout Factory and Netflix hide caption 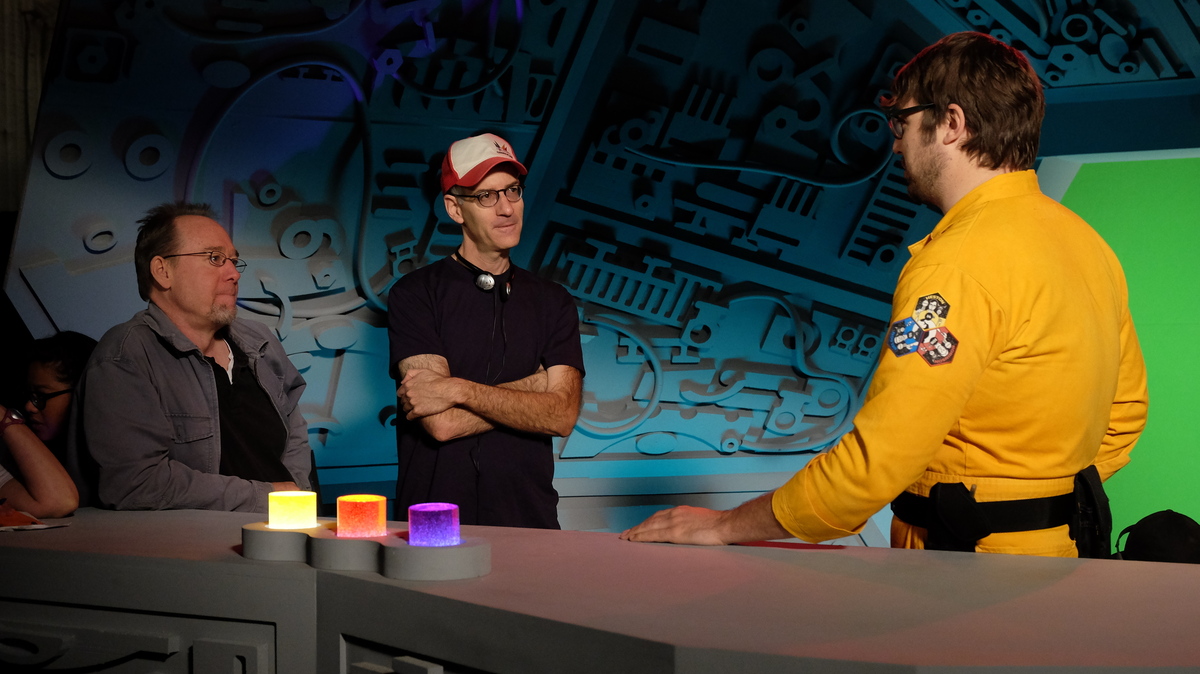 Hodgson and writer/producer Robert Cohen check in with Ray on the set of the new Mystery Science Theater 3000.

Netflix signed on to distribute it and the new MST3K started shooting last fall. The cast includes Baron Vaughn and Hampton Yount as the new robots, and Patton Oswalt and Felicia Day as the new mad scientists.

Day also grew up watching MST3K, and in addition to starring in Dr. Horrible's Sing-Along Blog she created a popular web series called The Guild. She says MST3K spawned a whole culture of silly online commentary. "Nowadays people are used to having that commentary in their day-to-day lives, you know. They're used to commenting on Twitter about, like, 'Hey, did you see Batman's new codpiece? It looks like a misshapen face,' or something."

The Internet is a make-fun-of-everything, snarky place that can sometimes be downright mean — but not MST3K. "I actually think there's a kindness to the sense of humor and the overall aspect and tone of Mystery Science Theater," Day says. "Joel — on the conference calls when we talk about the movies before we started writing on them — would always talk with love about the movies, never hate. He would be like, 'Guys, this movie is so awesome. There's this thing and he's flying through the air.' You're like, 'Oh wait, this sounds terrible.' But Joel loves it."

Hodgson makes a few on-screen cameos in the new MST3K, but he mostly stays behind the camera as a writer and creative director. "Honestly, I would have preferred that from the beginning," he says. "It kind of makes me uptight and it's a lot of pressure and I just feel so relieved to not have to worry about being on camera. I'm like really happy just being the guy who came up with it and being creative."

Hodgson's absence as host and head movie-riffer may make nostalgic fans sad, and even lead to some snark online. But we suggest those fans take a cue from the show's theme song: "Just repeat to yourself, 'It's just a show. I should really just relax.' "

Netflix is releasing the full first season of Mystery Science Theater 3000: The Return on April 14.

In a previous Web version of this story, we said Mystery Science Theater 3000 initially appeared on Minneapolis cable access TV. In fact, the show was first broadcast over the air on UHF channel 23, KTMA.