Accessibility links
Trump Says NATO 'No Longer Obsolete' After Meeting With Secretary General President Trump, who has questioned the relevance of NATO and challenged allies to spend more on their own defense, met on Wednesday with the head of the military alliance. 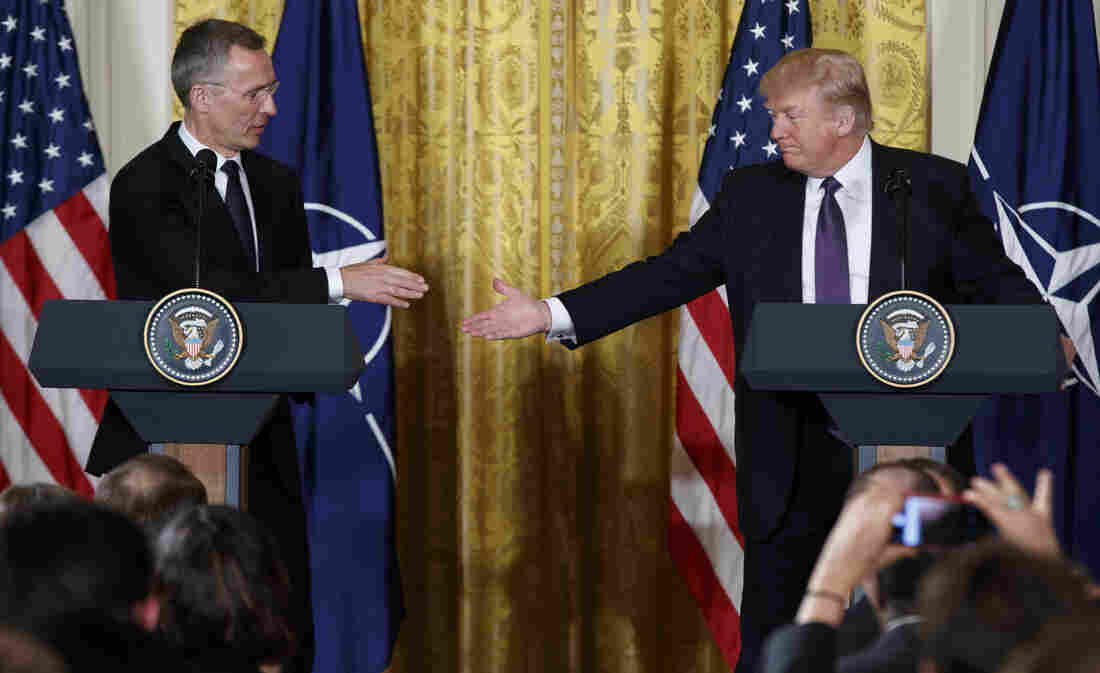 President Trump reaches to shake hands with NATO Secretary General Jens Stoltenberg during a news conference in the East Room of the White House on Wednesday. Evan Vucci/AP hide caption 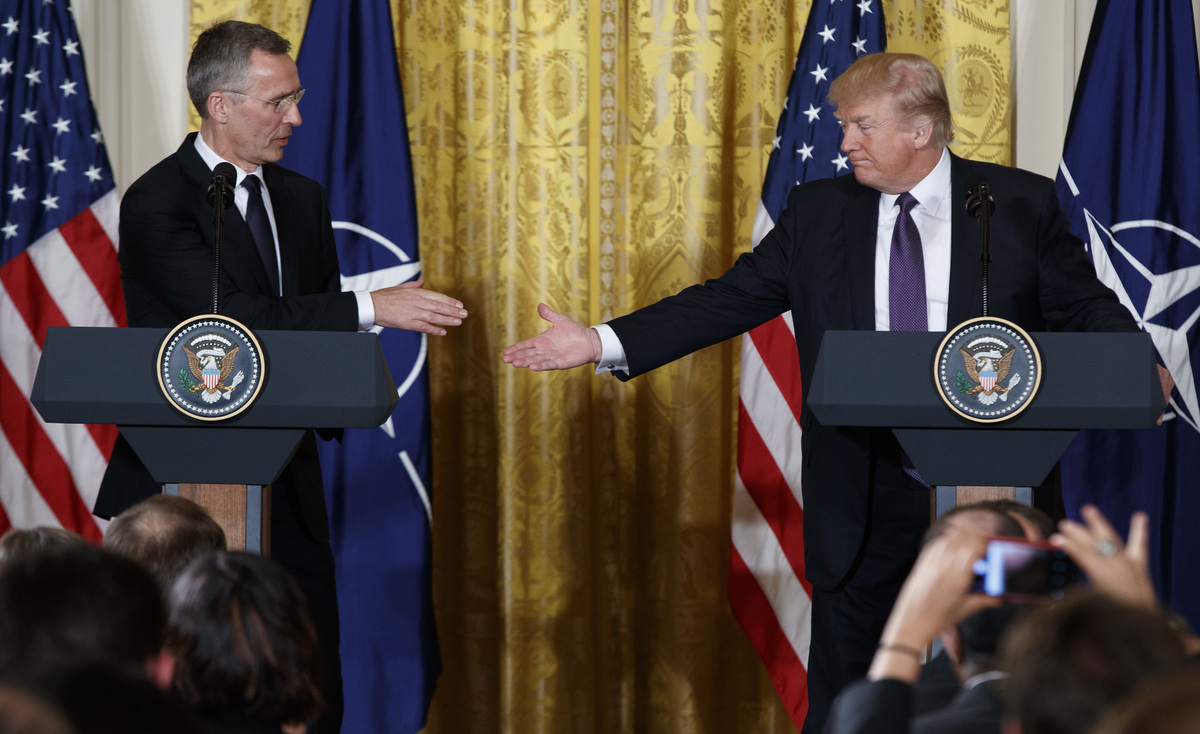 President Trump reaches to shake hands with NATO Secretary General Jens Stoltenberg during a news conference in the East Room of the White House on Wednesday.

President Trump on Wednesday sharply reversed his 2016 campaign stance on NATO. "I said it was obsolete; it's no longer obsolete," Trump declared, after a meeting at the White House with the alliance's secretary general, Jens Stoltenberg.

Trump had criticized NATO members for failing to spend enough on their defense, and for what he wrongly said was the North Atlantic alliance's failure to join the fight against terrorism. "I complained about that a long time ago," Trump said, "and they made a change, and now they do fight terrorism."

Great meeting w/ NATO Sec. Gen. We agreed on the importance of getting countries to pay their fair share & focus on the threat of terrorism. pic.twitter.com/e3ACOOOb0y

In a joint news conference, Stoltenberg said that NATO members increased their individual defense spending by 3.8 percent, or $10 billion, last year. He also reminded Trump that after the attacks on Sept. 11, NATO for the first time invoked Article 5, the collective defense clause, that says an attack on one member is a attack on all, and came to the aid of the U.S.

Stoltenberg said NATO troops have been fighting "shoulder to shoulder" with U.S. troops in Afghanistan for many years, and that "more than 1,000 have paid the ultimate price." He said that in NATO, "America has the best friends and the best allies in the world."

Trump said he had a phone conversation on Tuesday night with Chinese President Xi Jinping, who he said "wants to do the right thing" and help the U.S. deal with North Korea. Trump said the two discussed trade, and that Trump told him, "The way you're going to make a good trade deal is to help us with North Korea." If China does not help, Trump said, the U.S. will "go it alone," which he said "means going it with lots of other nations."

He also said he has "absolutely no doubt we did the right thing" in attacking Syria with cruise missiles after the Syrian chemical attack last week. Trump called Syrian President Bashar Assad "a butcher." In response to a question, he said, "It's certainly possible" that Syria carried out the attack without its ally Russia's knowledge, but added, "I think it's probably unlikely."

Trump repeated his belief that the world "is a mess," but said by the time he finishes in office, "It's going to be a lot better place to live." But for now, he said, "It's nasty."

Secretary of State Rex Tillerson raised the issue of defense spending late last month at a NATO meeting in Brussels.

"As President Trump has made clear," Tillerson said, "it is no longer sustainable for the U.S. to maintain a disproportionate share of NATO's defense expenditures."

Each NATO country has pledged to spend 2 percent of its gross domestic product on its own defense by 2024. Only a handful of alliance members meet that target now. U.S. defense spending accounts for somewhat over 3 percent of its GDP. Germany spends only about 1.2 percent of its GDP on its defense.

After a meeting with German Chancellor Angela Merkel in March, Trump complained that "Germany owes vast sums of money to NATO & the United States must be paid more for the powerful, and very expensive, defense it provides to Germany!"

Despite what you have heard from the FAKE NEWS, I had a GREAT meeting with German Chancellor Angela Merkel. Nevertheless, Germany owes.....

...vast sums of money to NATO & the United States must be paid more for the powerful, and very expensive, defense it provides to Germany!

NATO's secretary general says defense spending is only part of the picture, though.

"We need many different tools to stabilize our neighborhood," Stoltenberg said last month. "It's not either development or security. It's development and security."

Likewise, Trump wants to cut by half the number of refugees the U.S. takes in. He's criticized Merkel for Germany's welcoming attitude toward refugees.

Trump's Gunboat Diplomacy In Asia May Prove Quite Different From Syria

For all his questions about NATO, Trump looks forward to adding a new member to the alliance. The tiny Balkan nation of Montenegro has been approved to join NATO and is expected to take part in an alliance meeting next month.

White House officials note that Montenegro already spends relatively more on its own defense than most other NATO countries — 1.7 percent of its GDP.

Russia is strongly opposed to any Western tilt by Montenegro and its Balkan neighbors. White House officials say they're concerned by possible Russian meddling in Montenegro's election last October.

Trump had previously pushed for improved ties with Russian President Vladimir Putin, but Trump has been cooler towards Moscow since last week's chemical weapons attack carried out by Russia's longtime ally, Syria.

Aides say Russia's conduct has only "reinforced" Trump's commitment to working with NATO.