All Roads Lead Back To Florida In 'Sunshine State'

All Roads Lead Back To Florida In 'Sunshine State' 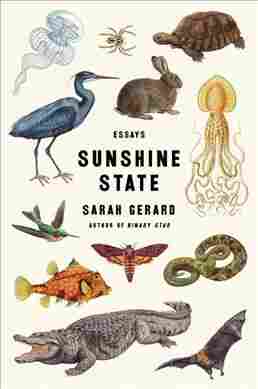 In Sarah Gerard's debut, the 2015 novel Binary Star, her unnamed protagonist undergoes a metamorphosis of metaphorical proportions. A road trip with her boyfriend takes them to the darkest regions of inner space, and Gerard's body and psyche undergo startling transitions. In the book, she also tackles topics close to heart and experiences, including eating disorders, which she's struggled with in her own life. In Sunshine State, her penetrating and deeply felt debut collection of essays, Gerard once again draws on the experiences and environment of her own life — specifically, her formative years in Florida.

I was a kid in Florida in the '70s and '80s, not far from the Tampa-St. Petersburg area where Gerard grew up. "Mother-Father God" — the piece in Sunshine State that comes closest to straightforward autobiography — uncannily evokes that time and place, right down to the Jimmy Buffett T-shirts, banks of palms and "lakes teeming with alligators." It's the story of how her parents met, told simply and without excess sentimentality. But that plainspoken tale is woven into a journalistic examination of New Thought, a spiritual movement dating to the 1800s in which Gerard's parents became swept up during the '80s. Gerard strikes just the right balance between objective distance and glimpsed emotion. She also establishes the dynamic she uses to great effect throughout the book: unflinchingly candid memoir bolstered by thoughtfully researched history.

'Binary Star' Is A Hard, Harrowing Look Into Inner Space

In "Going Diamond," her parents' stint as Amway salespeople — which itself becomes as cultish as their time in the New Thought movement — spins off into an account of the famous home-and-beauty company's business model and motivational philosophy through the years, as well as its insidious colonization of the upward aspirations of working people. Again, Gerard's careful layering of first-person memories and big-picture reporting lends substance to what might otherwise be lightweight recollections of childhood. Not that her autobiographical material doesn't stand on its own; "Records" is a coming-of-age tale set to a backdrop of '90s indie rock and hardcore, only its immersive, music-punctuated narrative dissolves into a coldly harrowing testimony about date rape. Gerard juggles nostalgia, criticism, romance and violence with pitch-perfect pathos.

"Are you a journalist?" the coordinator of a seabird sanctuary in Pinellas County asks Gerard in Sunshine State's eponymous essay. "I'm more of a memoirist," Gerard answers. She's at the sanctuary for a six-week stint of gathering research for her piece on Florida's preservation efforts. Through profiles and firsthand anecdotes, her story leads her to Ulysses S. Grant, beer magnates and the internecine politics and corruption of the animal sanctuary world (no, really). Along the way, she deftly mixes the elemental enormity of thunderstorms in the Gulf of Mexico with the delicate ecological balance — always on the verge of cataclysmic disruption — that marks the interplay of natural and man-made forces in Florida. "I felt I was on the trail of something ancient," Gerard observes. Her writing, lucid yet atmospheric, takes on a timeless ebb and flow.

Sunshine State doesn't confine itself to its titular locale. It also ventures into other places, both real and virtual, from Cleveland to Reddit. But all those roads lead back to Florida, which Gerard imbues with the eerie gravitational pull of both hometowns and black holes. In an age where the crazy-from-the-heat, ripped-from-the-headlines "Florida Man" has become a popular meme, and where the state as a whole has become in increasingly contentious political hotbed, Gerard crafts a nuanced and subtly intimate mosaic. Sunshine State is not a glowing encomium of Florida, nor is it a snarky takedown. Instead, it's a drifting, psychogeographical exploration of a place she once called home — and that, in return, has come to live inside her.