Accessibility links
Trump Supporters In The Upper Midwest Have A Message: Be More 'Presidential' One of the under-covered stories of 2016 was Minnesota. It stayed blue, but barely. Trump was closer there than any Republican in 32 years, and it could indicate a reshaping of the political map. 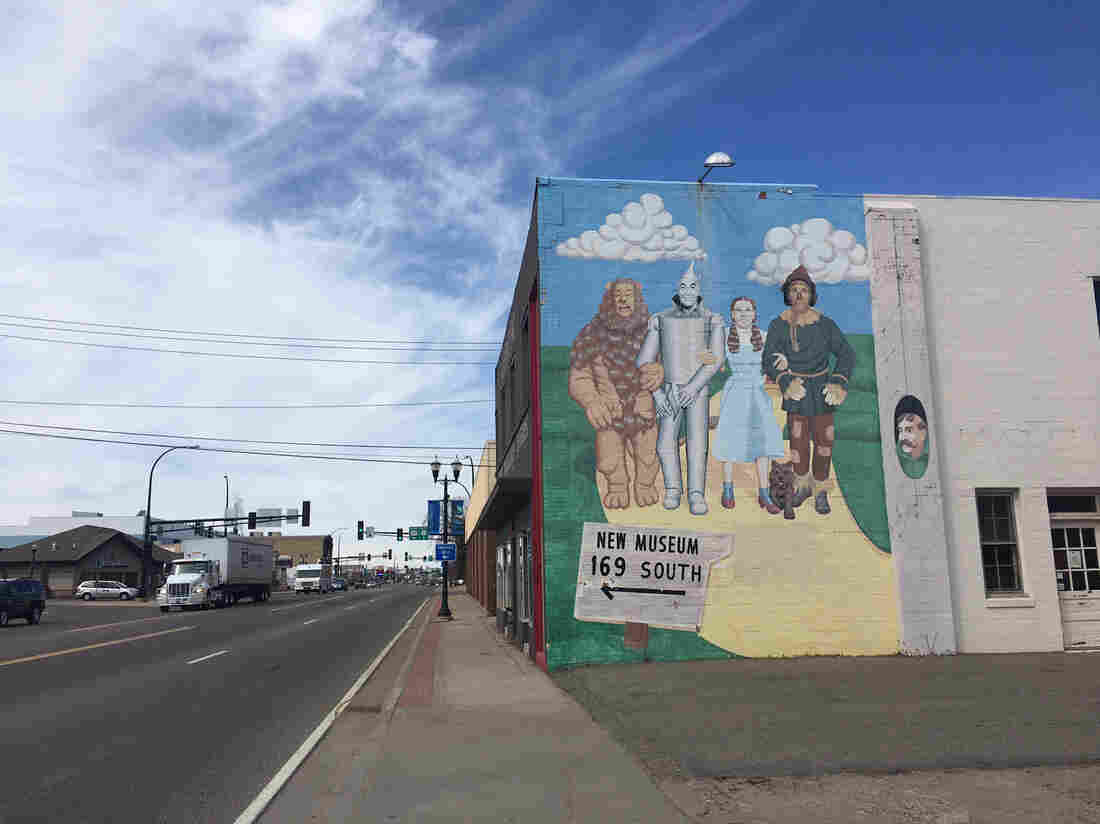 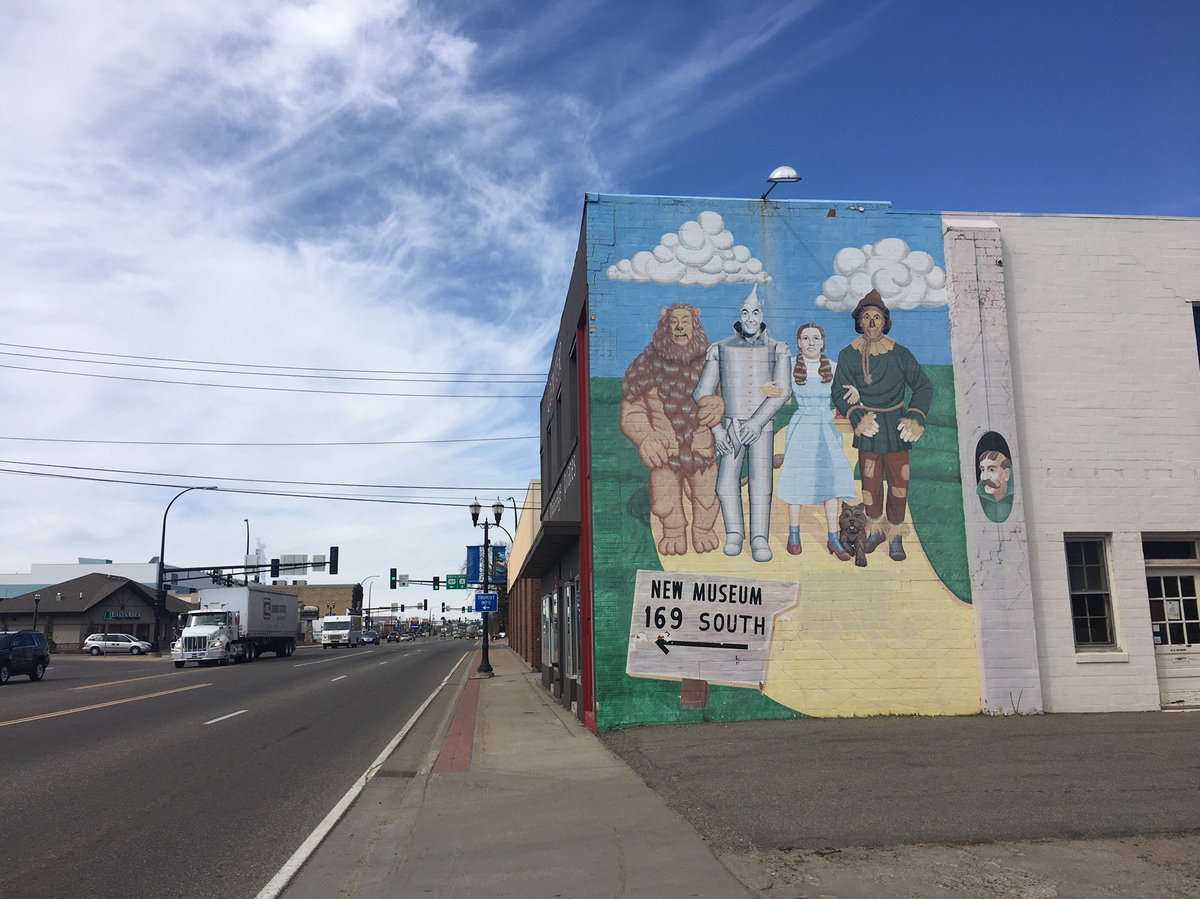 Much of President Trump's political strength comes from the fact that he won in places Republicans usually don't.

In November, long-time Democratic states like Michigan, Pennsylvania and Wisconsin flipped from blue to red. He nearly did it here in Minnesota, too, a place that hasn't gone Republican since 1972.

"I didn't see it coming and most people didn't, obviously," former Minnesota state Sen. Tom Saxhaug said, as he looked out from seat in the front window of the Brewed Awakenings coffee shop in downtown Grand Rapids, Minn. Saxhaug is now retired, retired because support for Trump in this area helped swamp his own re-election bid. The Democrat (or more precisely the Democratic Farm Labor Party, or DFL) lost by a just 545 votes in November.

Trump broke through in the Upper Midwest in a way no Republican has in a generation. But one of the lesser-covered or understood states where that was true was the liberal stronghold of Minnesota. The state stayed blue, but barely. Trump lost it by less than 2 percentage points, the best finish by a Republican in 32 years.

Trump's populist message resonated with blue-collar white voters — something that has the potential to reshape the political map. But some of those same voters, though they remain supportive, are sending something of a warning signal — they wish he would be more presidential.

"There's a bit too much drama for me sometimes, with the tweeting," said Dean Morgan, a Trump voter and owner of SONSHINE Muffler and Brake, a religious-themed muffler- and brake-repair shop just a few blocks from Saxhaug's perch at the coffee shop.

That was a sentiment heard repeatedly here in this mild-mannered Midwestern town of just under 11,000 people. It sits in the heart of Minnesota's eighth congressional district. It's a large and, in parts, rural district that extends some 300 miles, all the way from the Twin Cities' suburbs up to the Canadian border and includes the "Iron Range."

The Iron Range is home to mines of high-grade manganese ore that first opened after the Industrial Revolution at the turn of the 20th Century. It long supported this area, but fell on hard times in the 1980s, like a lot of other areas home to American manufacturing and steel companies. Efforts to diversify its economy have sputtered.

In this district, the exurbs give way to forests with too many lakes to count. It eventually hits mine country in the Iron Range. People here like to say the economy is all about "the Three T's," Taconite, Timber and Tourism."

In less alliterative language, that's mining, forests and lakes. And with a population that's some 93 percent white, this congressional district has lots of the white, working-class voters who represent a big bloc of Trump's support.

It's also one that has long been solidly Democratic. That all changed in 2016, going for Trump by better than 15 percentage points.

'Wish he were a little more reserved'

A cross, rays of sunlight and "JESUS" in large block letters are all prominent on the signage of Morgan's auto-repair shop. Morgan is a born-again Christian, and he believes Trump is one, too.

Even though that's not true — religious-right leader James Dobson had to walk back that same claim last summer — the thrice-married billionaire former playboy won a whopping 81 percent of white, born-again evangelicals in the 2016 election.

Morgan said though he's still supporting the president, "I wish he were a little more reserved, if you know what I'm saying."

Asked if the Trump presidency has been what he expected, he hesitated before answering, "You know it has, and it hasn't."

Greg Gilness, a 66-year-old former steelworker, said of Trump: "He's got a lot to learn."

He added with clear frustration: "I think he has to learn to be more presidential. He has just got to conduct himself like he's the president of a great power."

Gilness stressed that he isn't a member of a political party and that he "votes for the person." He wouldn't disclose which person he voted for in the presidential election. But, at times, he sure sounded like a Trump voter.

"I was leaning toward him," Gilness admitted, "but I won't tell you how I actually voted."

He spoke to Trump's appeal. "People are looking for hope," he said, "and he [Trump] gave a lot of people a little bit of hope to hang onto."

That hope for Gilness specifically was economic. His plant closed down, and while he transitioned to an office job for the same company, he said he believes Trump will be very good for the mining industry. He expects Trump to do something about low-cost, imported steel — as he's promised. 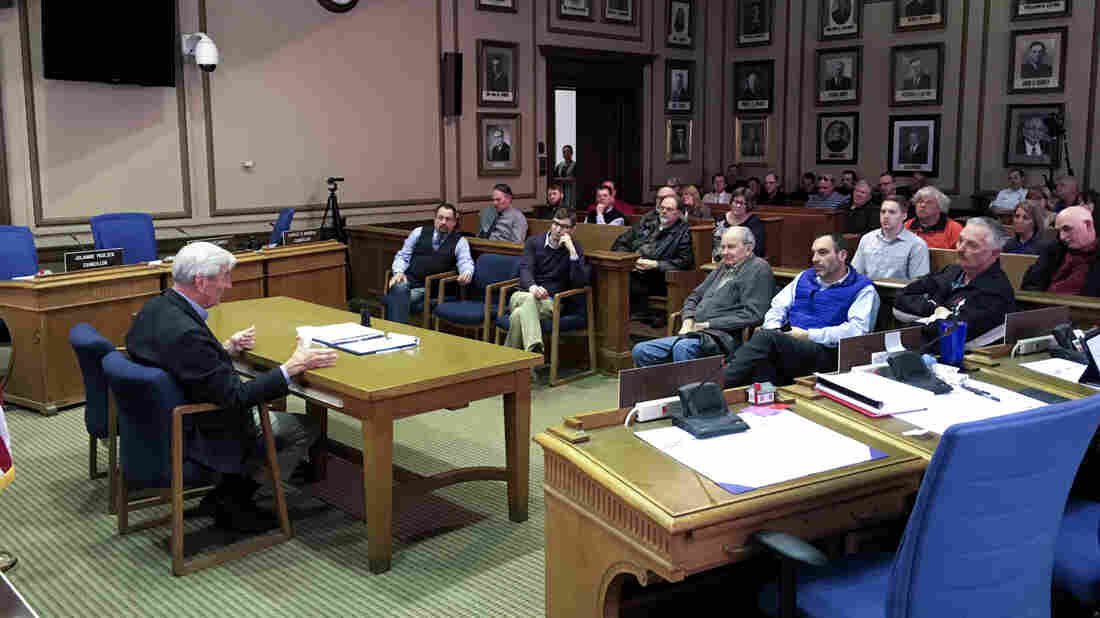 Rep. Rick Nolan holds a town hall in Virginia, Minn., on Wednesday. The Democrat won a narrow victory in one of the most expensive contests in the country in 2016. Don Gonyea /NPR hide caption 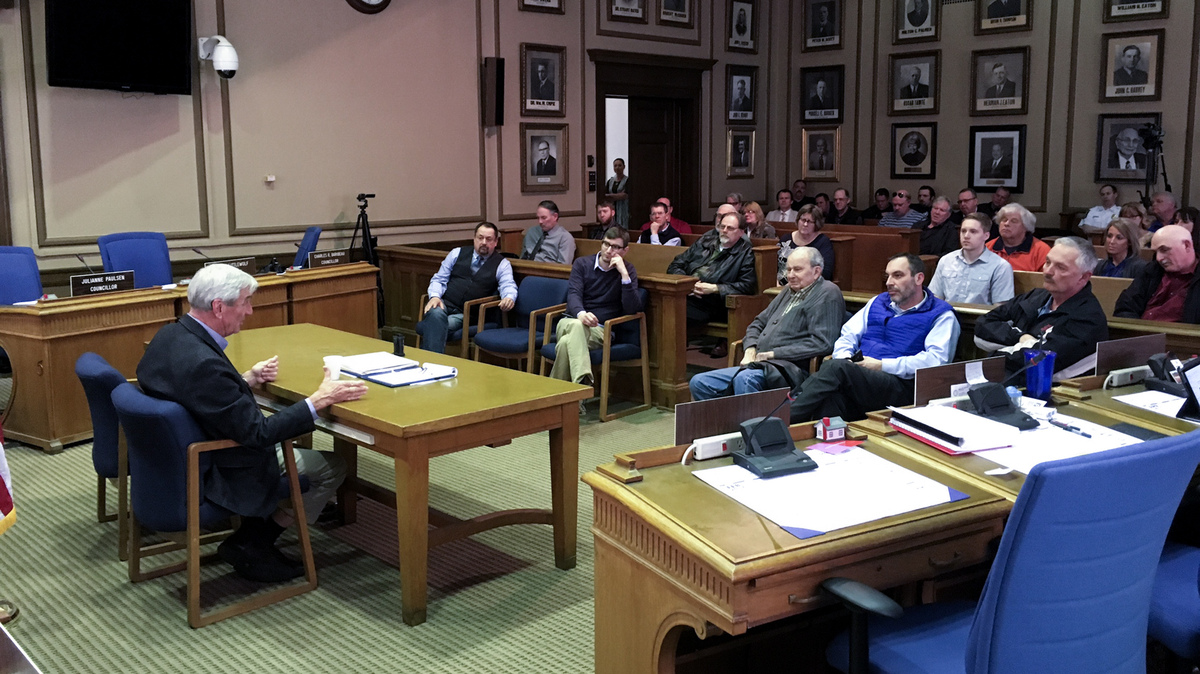 Rep. Rick Nolan holds a town hall in Virginia, Minn., on Wednesday. The Democrat won a narrow victory in one of the most expensive contests in the country in 2016.

Split ticket: A Democrat in what's now a Trump district

There's a wrinkle — Gilness would say one person he voted for: his congressman, Rick Nolan, a Democrat.

Gilness was actually at a Nolan event when he talked to NPR. Nolan has served the district since 2012. He previously served two terms in Congress in the 1970s, too.

Nolan held on to win a narrow victory in one of the closest and most expensive contests in the country last year. He's been holding town-hall style meetings all across the district during the current congressional recess.

The sessions have been courteous and polite, with none of the rancor and shouting that has marked some town halls around the country this year. Nolan spends time at each pointing out problems with the budget Trump has proposed, with cuts that he says will be bad for this region.

"Funding for the National Forest Service is gutted," Nolan said in an old city-council chamber in the small mining town of Virginia, Minn.

So, too, Nolan said, is money for "transportation, and funding for the Great Lakes."

It's there because the movie's biggest star, Judy Garland, was born in Grand Rapids in 1922. (Fun Fact: Also born in this district — in Duluth — was songwriter, and now Nobel laureate, Bob Dylan, who grew up just up the road in the town of Hibbing.)

As Saxhaug talks Trump, it's clear there's plenty he disagrees with. This self-described "pro-gun, pro-mining, union-Democrat" said of the president, "He can't concentrate on anything long enough to accomplish anything. I'm real, real worried about the fact that he goes from one thing to another."

He did not vote for Trump, but now, nearly 100 days into Trump's presidency, Saxhaug said, he is pulling for Trump to succeed. He said he'd be happy to back the kind of big infrastructure spending Trump has talked about (but not yet officially proposed in his budget or in specific legislation). He also noted that he could get behind tax reform, too — if it's done fairly.

"Just to be clear, you're a Democrat saying this," this reporter noted. 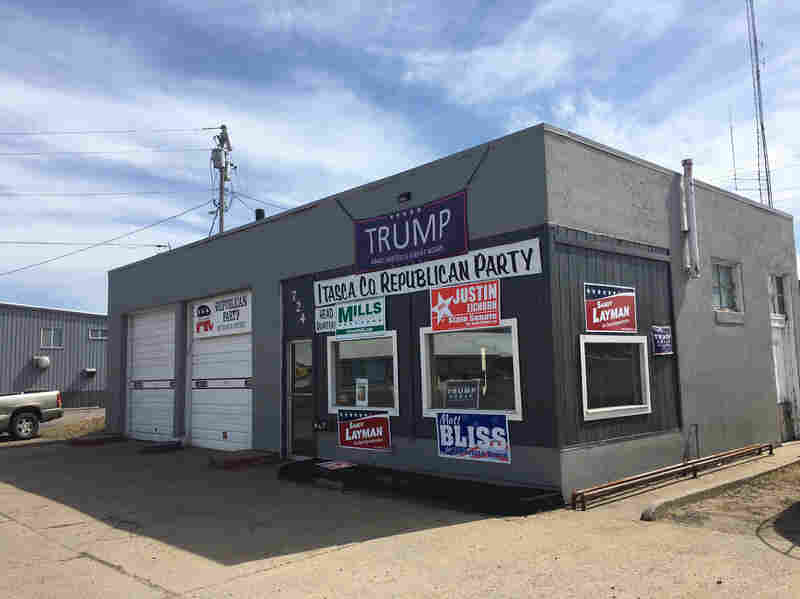 The GOP campaign headquarters for Itasca County, Minn., once was a place to go for oil changes. Now, it awaits its next life. Trump easily carried the county that former President Obama won twice. Don Gonyea /NPR hide caption 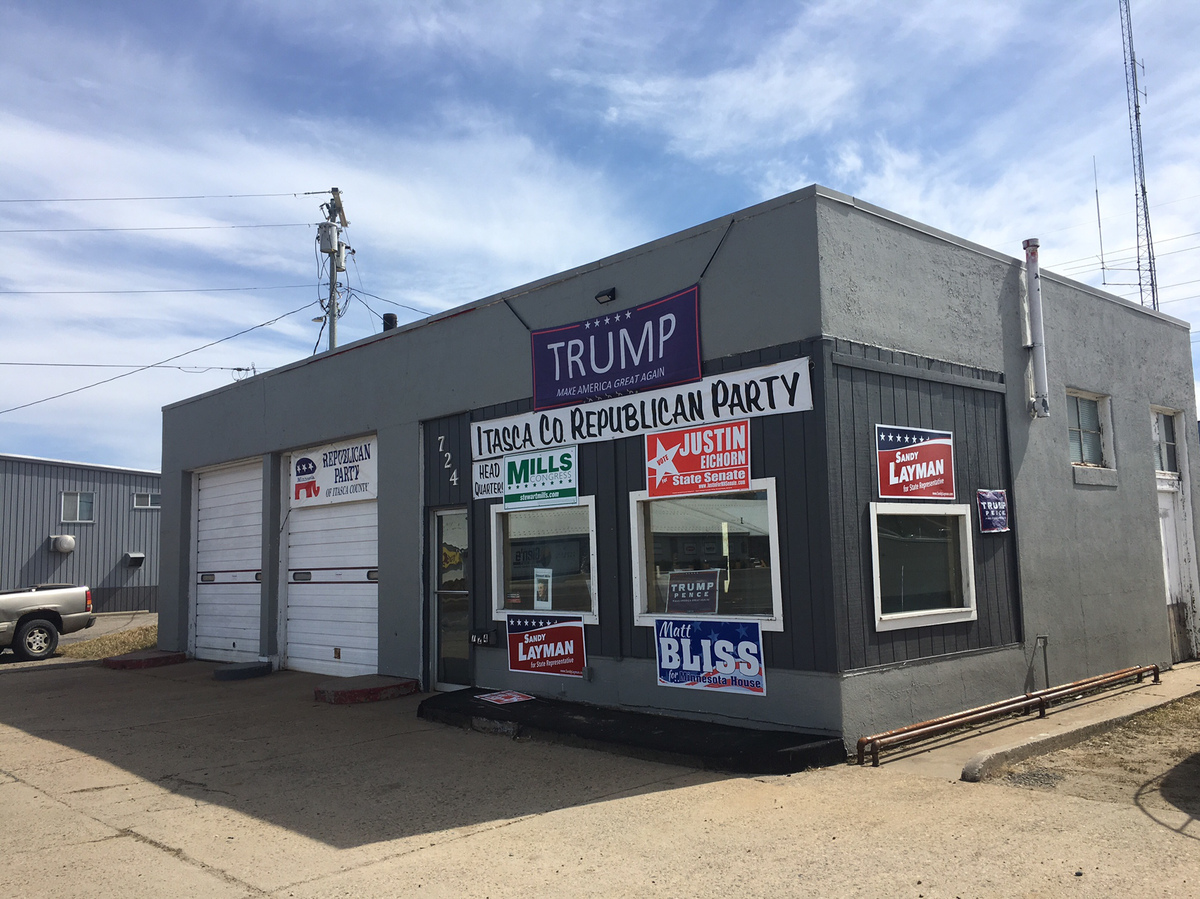 The GOP campaign headquarters for Itasca County, Minn., once was a place to go for oil changes. Now, it awaits its next life. Trump easily carried the county that former President Obama won twice.

"You're one of those Democrats who legitimately says you want him to do well, because that's good for the country?"

But other Democrats in the coffee shop were not so magnanimous.

At a table over by the far wall, retired public-school teacher Frieda Hall was having lunch with a friend. She said she's been "mortified" by what she's seen from President Trump so far.

Asked if it's what she expected, she replied, emphatically, "Yes, exactly what I expected — a total chaotic mess."

She doesn't trust Trump's judgment, his motivation, or the people he has surrounded himself with in his administration. She did say, though, that Trump has kept one promise — to be a disruptive force.

"He is disrupting the way things work — and to our detriment, and with no set goal," she said.

Hall then asked, "Like the goal of disruption is what? To disrupt? And then what?"

A call to end the drama

Like him, or dislike him, people here in this place Trump won, tell you they want him to act more like a president. It was a common thread.

They want an end to all the drama. World events are dramatic enough, they seem to be saying.

For his critics, it's yet another reason to judge him negatively.

But for those who like him, they will often just shrug and say, "That's just who he is." And they find a reason to like him.

Back at the brake shop, while Morgan says he wishes Trump would be more presidential, he shows no sign of abandoning him.

He was quick to praise the president on foreign policy, for example, including the missile strike on Syria.

"I kind of go along with what what they're doing right now," Morgan said, adding about Syrian President Bashar Assad, "I mean, this guy is killing babies with gas.