Accessibility links
New Jersey Rep. Leonard Lance Takes Heat From All Sides In Town Hall The moderate GOP congressman recently held his third town hall of the year. He's under pressure from constituents and conservative activists in what is now the median political seat in the country. 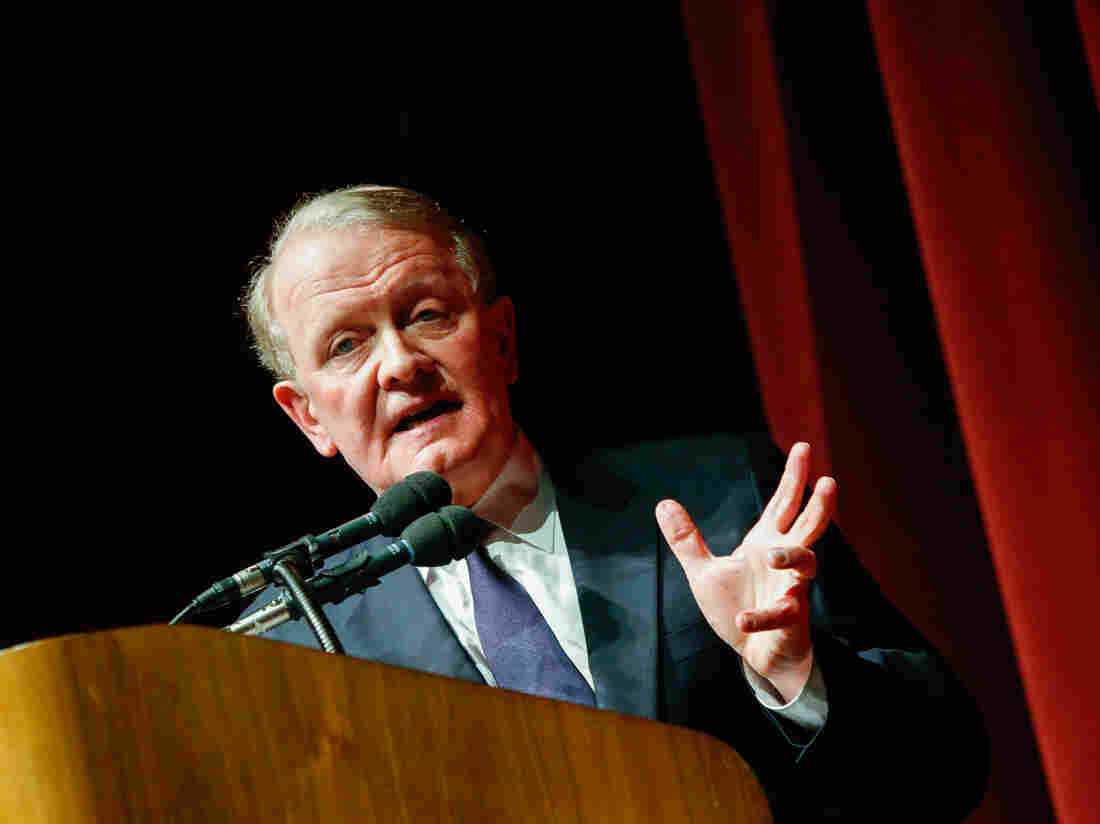 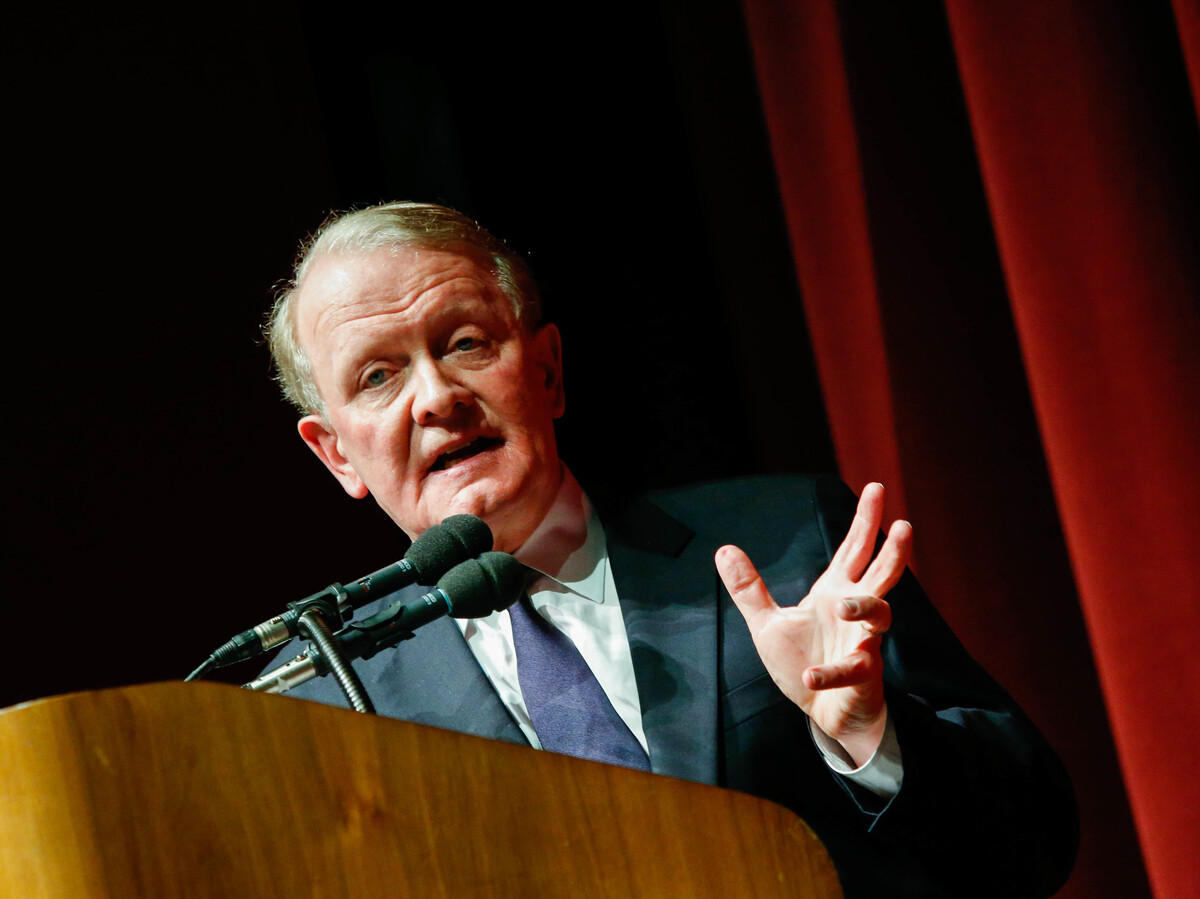 What's the political definition of a moderate? For Republicans like New Jersey Rep. Leonard Lance, it means taking hits from all sides.

At his third town hall of the year — his 43rd in his congressional career — Lance took incoming from his constituents for more than an hour on Wednesday evening.

"Do your jobs! Work together!" yelled Janet Katz, a Chester resident and constituent who was one of a handful of the hundreds in attendance who got to ask a question. (To avoid the appearance of stacking the deck, Lance's constituents are given ticket numbers that are pulled at random.)

Katz, like most constituents here, came to voice opposition to the GOP's health care bill, efforts to cut funding for Planned Parenthood and general intransigence of Washington. "If everybody doesn't get exactly what they want, then there's a win. Compromise!" Katz ordered.

Katz wants to keep the Affordable Care Act intact and for lawmakers to fix the system, not tear it down. "I want this repeal crap to stop," she said, to a cheering audience.

Lance is already on her side. He is a "no" vote on his party's health care bill. He reiterated his vow to oppose any bill that rolls back protections for people with pre-existing health conditions, as well as the other popular provisions of the law that mandate minimum coverage standards.

Lance did not win over Katz or the room, however, with his position to redirect Planned Parenthood funds to other health care providers that do not offer abortion services.

His health care positions have likewise provoked attacks from the other side of the spectrum.

The conservative grass-roots activist group Club for Growth is targeting moderates like Lance in a recent wave of attack ads. Conservative activists want the GOP bill to go further to fully repeal the law and start all over. "Tell Leonard Lance, don't fall for fake repeal. Vote 'no' on Ryancare and get rid of Obamacare for good," the ad states.

This is life in the political middle in 2017, and Lance is at the center of it all.

After the 2016 elections, his wealthy, suburban northern New Jersey district became the new new media seat in Congress: not too conservative, not too liberal, just right — of center. That's according to the nonpartisan Cook Political Report that ranks districts based on their partisan leanings every two years. In the spectrum of 435 House seats, Lance's is ranked 218th.

He is also one of 23 House Republicans who represent a district Hillary Clinton carried last November, by a narrow, 1 percentage-point margin.

Those results means fresh challenges to being a Republican moderate with Donald Trump now in the White House. The president is really unpopular in Lance's district among Democrats like Barbara Babcock, a retired teacher and Flanders resident who also attended Lance's town hall. "The current administration is ruining the Republican brand," she said. "And I think anybody who really cares about standard Republicanism as it used to be, really needs to stand up to this administration and I'd like to see my congressman do that."

A Fairleigh Dickinson University poll in late March gave Trump an approval rating of just 28 percent in the Garden State.

Which means Lance is often eager to distance himself from the Republican pack. At his town hall, he called on the president to release his tax returns, embraced the need to address man-made climate change and criticized the president's early round of executive orders on immigration.

For every chit he earns from some constituents for taking more centrist positions than many Republicans in his party, it can leave others feeling disappointed.

"You know I was hoping that once they had the Senate, the Congress, and the White House, they would do a little bit more," said Roxanne Wallace, another of Lance's constituents at the town hall. She believes Trump is showing leadership and doing a pretty good job, and she wants to see Republicans work with him to deliver now that they control Washington.

She's not impressed so far. "They seem to buckle all the time when somebody starts screaming or protesting or using their thumb up signs. They buckle," she said.

Energized Democrats and frustrated Republicans are a political mix that will keep Lance's district at the very top of the list for competitive races in next year's midterms. That combination was already on display at last night's town hall as the congressman faced repeated catcalls and taunts about losing next year.

But the congressman didn't want to go there yet. "I believe 2018 will take care of itself," he said. "I want 2017 to be a year of governance, where we can come together and work in a bipartisan and bicameral capacity."

That's a pretty moderate message. It's just not clear yet who's listening.