Accessibility links
Philanthropy In America Is Becoming 'Ideological Arms Race,' Author Says Many of the richest citizens are reshaping public policy, and society, as they see fit. Because of their numbers, they have more influence than the philanthropists of the past, David Callahan says.

When Forbes first listed the 400 richest Americans in 1982, there were 13 billionaires on that list.

Today, every single person on the Forbes 400 list is a billionaire.

Many have become philanthropists, and they are reshaping public policy, and society, as they see fit. And because of their numbers, they have far more influence than the philanthropists of the past, argues David Callahan, author of a new book on philanthropy, The Givers: Wealth, Power and Philanthropy in a New Gilded Age.

Many are now household names: the Gates, the Kochs, the Waltons, the Steyers, the Mercers, to name a few. They come in all political stripes.

"We're seeing just an escalating ideological arms race as more money pours in from wealthy donors across the spectrum," says Callahan, who founded the news website Inside Philanthropy.

In an interview with NPR's Lulu Garcia-Navarro, Callahan describes a meeting with philanthropist Laura Arnold, who said, "When you open the newspaper in the morning and you see things that you don't like, things that upset you, if you have a foundation you can do something about it, you can try to solve the problem and take action."

So what's wrong with this?

When people talk about the influence of money in politics, they often mean campaign donations. But wealthy philanthropists can influence policy in many other ways. Author David Callahan says they can do this by setting up a foundation to fund these things:

Callahan says this philanthropic money comes at a time when most Americans feel disenfranchised. "More and more public policy debates looks like Greek gods throwing lightning at each other, billionaires on the left and the right, as the rest of us watch from the sidelines," he says.

When wealthy Americans set up a charitable foundation, they can avoid paying taxes, while influencing public policy. "If I give a donation to a politician, that's not tax deductible. If I give a donation to a Washington think tank that whispers in the ear of that politician, I can get a tax break for that," Callahan says. "The IRS makes few distinctions in what is tax-deductible giving, and I think that's a problem."

Callahan says the influence of big donors will become greater as government steps back, through budget cuts to public agencies, and as private philanthropy steps forward.

Whether it's from the left or the right, Callahan says, all of it is troubling. 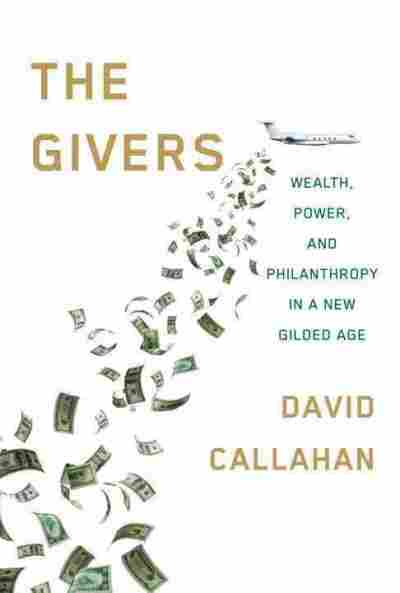 Wealth, Power, and Philanthropy in a New Gilded Age

In terms of sheer dollar amounts, it's unclear who gives more. But Callahan says right wing donors have been more effective when it comes to shaping economic and fiscal policy, bankrolling big think tanks in Washington that advocate for cutting the size of government. Those include The Heritage Foundation, which now plays a big role in the Trump administration.

Public education is another area where there has been an influx of money from billionaire donors. The Waltons of Wal-Mart fame and Betsy DeVos, now the education secretary, for example, are well-known supporters of charter schools. The Bill & Melinda Gates Foundation was a powerful force behind ushering in the Common Core educational standards. (The Gates Foundation and the Walton Family Foundation are among NPR's financial supporters.)

"More than any single actor in U.S. education, [the Gates] really made the Common Core happen," Callahan says. "That's an astonishing achievement for private philanthropy."