During his first day on the job, Alex Perry learned one of the pitfalls of cat grooming when he was bitten by a Maine Coon.

"This one decided to bite me right in the gut. I made the mistake of pulling away. And I got a big tear right in my belly," Perry recalls of that day back in 2012.

If you're a cat lover, chances are you know what a Maine Coon is. Commonly referred to as "the gentle giant," the Maine Coon is one of the largest and most social domesticated cats.

So not only was the cat's action a surprise, but it was enough for Perry's boss to wonder if he might quit.

But Perry reasoned, "It certainly wasn't the worst thing that had happened to me. It wasn't enough to scare me away."

Perry stuck with it for a full week, at the end of which, his boss asked, "Well, what do you think?"

Since then, Perry says he has groomed more than 30,000 cats — a job he never would have imagined himself doing just a few short years ago when he was making a thriving livelihood in the construction industry.

Back in the early 2000s in Seattle, Wash., where Perry still lives, he was a housing contractor and business was booming. He says that the work could be grueling, but he was young, and the money was good.

"I feel lucky because I am now finally one of those people that — I do what I enjoy for a living and I am able to maintain a decent lifestyle doing it."

"I think my favorite part of the whole thing was just kind of hanging out with the guys," Perry says. "You made a lot of friends. We were going out to dinner a lot, getting together, going dirt bike riding, everybody had toys. It was a good time to be in construction."

But then the housing bubble burst.

"I started getting a feeling about 2008. I was saying that this whole housing bubble couldn't last forever. ... This was the beginnings of things starting to take a turn."

Soon, it was hard for Perry to get jobs.

In 2011, Perry said he and his business partner decided it was no longer worth the effort scrounging to find work and only landing low-paying jobs. He said they decided to sell off their assets and get out of the industry.

"I just kind of quit everything and for the first two weeks it was absolutely wonderful; no more headaches, no more phone calls," Perry says. "But sitting home and watching TV in your underwear is only fun for so long. I would say week three and week four, I really started to feel like a loser and then I really started thinking hard about what I was going to do next."

Cat grooming as difficult as construction

The inspiration for Perry's next career move came from an unexpected place—his own cat, a silver Himalayan named Gizmo.

"She was beautiful. She was one of those cats that got by on her looks," Perry says. "One day, my neighbor was changing his motor oil and she decided to take a nap in the used motor oil pan. She was a mess, so I quickly had to find myself a cat groomer. So, I found one, took her in there. They got her all scrubbed up I watched the process and I was fascinated by it."

Perry said he'd never even heard of cat grooming until that day Gizmo had that strange accident.

And that's when he said, "I started to think, 'Hey, maybe I could do this for a living.'"

By the following year, Perry had started his new life as an entry level cat groomer, and he quickly got plenty of experience, helping to groom 12 to 18 cats a day, five days a week. 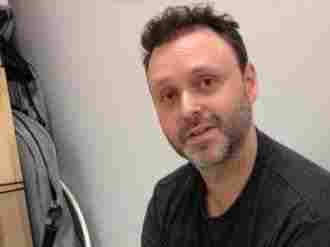 "It was quite a grueling [pace]. I would say in the time I worked there, I saw 12 people come and go. Out of those 12, I would say eight of them quit either the first day or within the first week."

But Perry says he was hooked. By 2015 was a co-owner at Cozy Cat Boarding and Grooming in Seattle.

Perry, 43, believes that most people have a misconception about what cat grooming is all about.

"A lot of people get into it thinking you get to play with kitty cats all day, which in a sense you do, but it's hard work. I would put it right up there with construction as far as the difficulty of the work," he says.

Cats feed off of your energy

Perry insists that one must have a special touch to be successful in the cat grooming business.

"Some people have a gentle touch and some people don't," he says. "I just feel very relaxed around cats, you know. I'm not a hippy-dippy type person, but I definitely believe cats feed off of your energy and if you have a positive, quiet energy, I think the cat senses that and it will just make everybody's life much easier."

One of Perry's favorite things about the job is bathing the cats, and he offers a special tip.

"I like to wrap them in a little microfiber cloth and then we roll them in the beach towel and we make a little purr-ritto," he says.

"I feel lucky because I am now finally one of those people that — I do what I enjoy for a living and I am able to maintain a decent lifestyle doing it."

As for that age old question some may be asking, "Well, how do you bathe a cat?"