Accessibility links
#GrabYourWallet Boycott Against Trump Companies Looks To Expand Its Reach Shannon Coulter, the founder of the anti-Trump boycott movement #GrabYourWallet, believes the protest is having a broader cultural impact beyond affecting a corporation's bottom line. 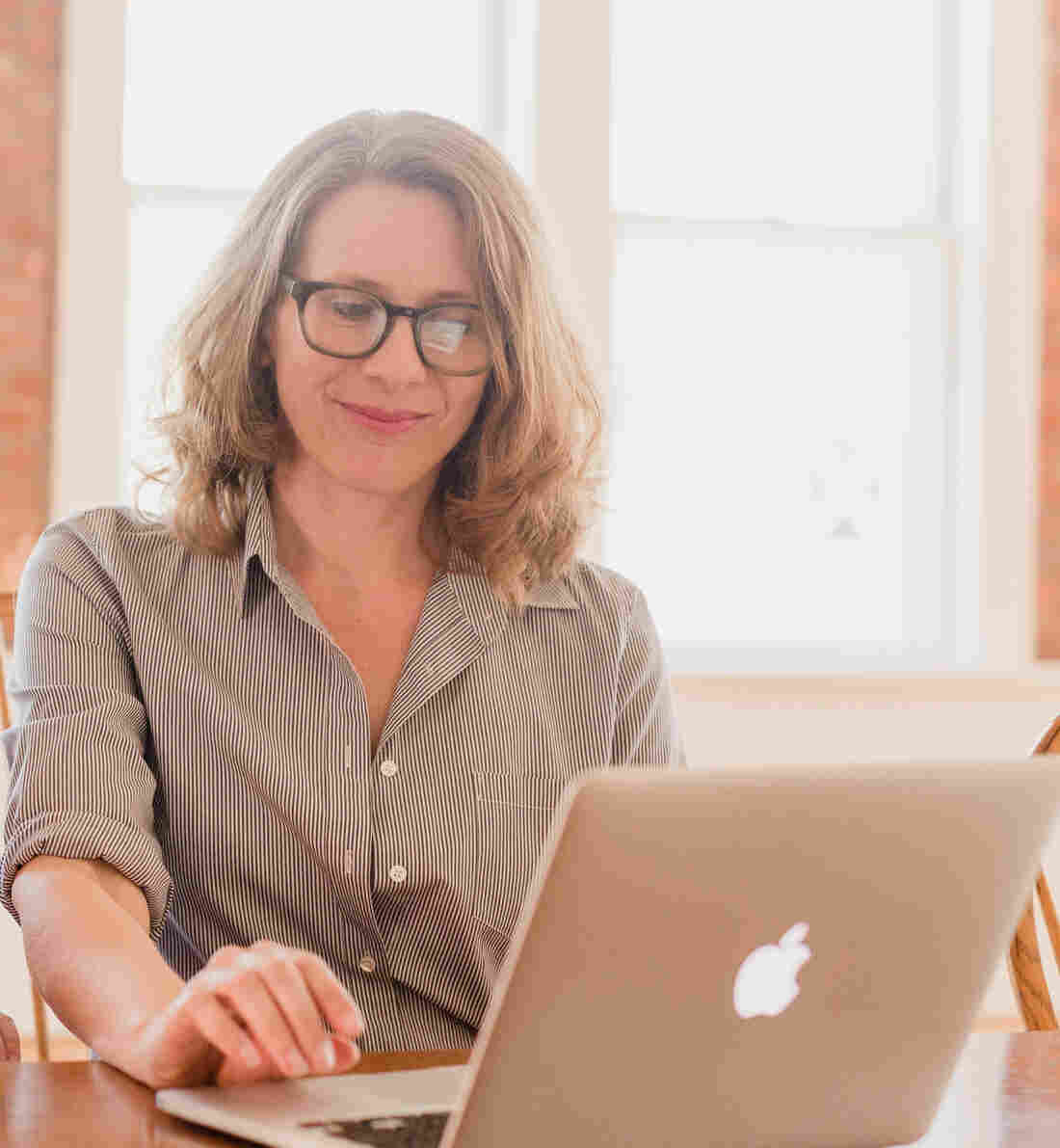 Activists took to the streets in Washington, D.C., and several other cities Saturday — the traditional Tax Day (which officially falls on April 18 this year) — to try to pressure the president to release his tax returns. Liberal protests are fast becoming a fixture of Donald Trump's presidency.

Trump's first full day in office kicked off with a massive Women's March. Then there were the Day Without A Woman protests.

Next weekend, communities across America plan to hold Earth Day March for Science rallies to highlight climate science and protest proposed EPA cuts, among other issues.

But for others, marches are not enough.

In San Francisco, Shannon Coulter is looking to expand her national Grab Your Wallet boycott movement into a broader nonprofit aimed at corporate accountability as well as resistance to Trump. The boycott Coulter founded is aimed at Trump family products, properties and companies whose executives and board members actively support the president.

"I don't consider myself an activist. Even now, it's a strange label to me," the 45-year-old says from inside a rent-by-the-day office in downtown San Francisco. #GrabYourWallet has no permanent office space. "I think of myself first and foremost as a businessperson. The newer role of activist is still taking shape for me."

The boycott took shape last October in reaction to Donald Trump's now infamous vulgar comments about women that were released from a 2005 TV appearance outtake.

Outraged that the then-Republican nominee was speaking about women in such offensive terms, Coulter tweeted a screenshot of a handful of companies that sell Trump family products.

The boycott was soon born.

Today, #GrabYourWallet's simple spreadsheet on a web site of the same name gets more than two million unique views a month and has his hit more than 950 million shares on social media.

Not bad for an organization with no budget, no paid employees and no office. A handful of social media volunteers help Coulter manage and promote the site. 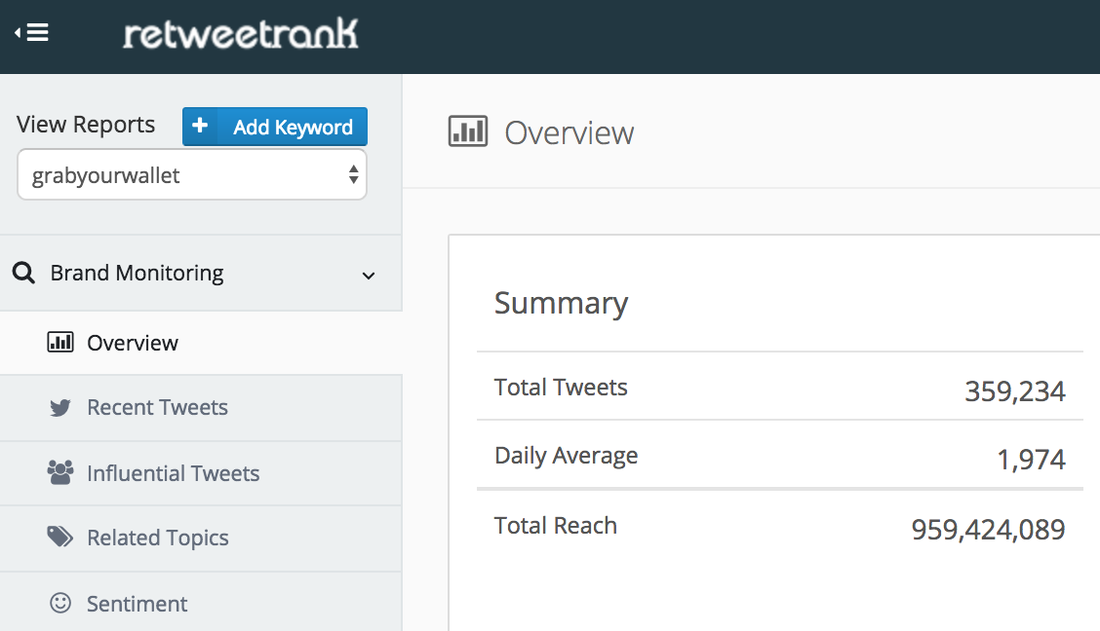 "What I hear a lot from #GrabYourWallet participants is: 'This gives me some sense of control over the situation right now,' " Coulter says. "We may have lost at the ballot box, but we can vote at the cash register every day. I'm going to continue to reach out to these companies to let them know I'm not doing business with them until they sever their relationship with the Trump family."

Today, more than 50 companies are on the boycott list. She encourages consumers not to spend their money with them because they sell Trump products or because a member of the company's board or a senior executive has backed Trump's campaign.

"If you're going to give money to the campaign of a guy who makes fun of disabled people, who questions the nationality of our country's first black president, who likes to grab women by the genitals, you are going to raise the ire of consumers," Coulter says. "That's a part of your brand. And any company that thinks it's not a part of their brand is being naïve."

She's kept her small marketing business going. But she says moonlighting with #GrabYourWallet has all but taken over.

"The balance is that there is no balance," she says. "There are long days of doing both my small business and #GrabYourWallet. Both take a lot of time and attention."

It's not clear what, if any, economic impact the boycott is having.

'The Resistance' Faces A New Question: What To Do With All That Money

Some studies show these consumer protests and divestment drives often have a limited effect on a company's bottom line and rarely alter long-term corporate policies.

But a brand's reputation can take a serious PR hit. And that's part of what Coulter is banking on. Her success metric for this isn't a company's stock price or quarterly sales.

Her benchmark is how many companies have been taken off the boycott list. So far, it's about two dozen including Nordstrom, Kmart and Neiman Marcus.

"Some of have made public statements and some haven't. For our purposes, it doesn't really matter why a company has dropped Trump products, only that they have," Coulter says.

More than 50 companies remain boycott targets including some major players such as Amazon, MillerCoors, Walmart and L.L.Bean, whose board member Linda Bean has donated to a political action committee that backed Trump's presidential campaign.

But the Maine-based outdoors retailer company has also won some local praise for hiring Somali refugees.

"It's great that they do that," Coulter says. "But it's just not good enough. We're not going to shop at L.L.Bean until our dollars aren't going into the pockets of somebody who may use that money to donate to extremists."

An L.L.Bean spokeswoman did not respond to NPR's phone calls or emails requesting comment.

Coulter calls Amazon "the most opaque and nonresponsive company on the list. We haven't heard a thing from them," she says. "Either about the advertising they continue to do on Breitbart or the Trump products that they continue to distribute and sell."

We reached out to more than a dozen companies on the boycott list, including Amazon.

Pete Coors — a board member of the parent company Molson Coors — has actively supported and raised money for Trump.

In a statement, the company said, "Boycotting our brands only harms our hard-working employees and their families." The company declined to say if the boycott has affected sales, saying only "We respect the rights of every one of our employees to support whichever candidate they choose. And, we encourage all of our employees to participate in the democratic process and vote."

One of #GrabYourWallet's biggest targets is Ivanka Trump and companies that sell her fashion line of clothes, jewelry, shoes and accessories.

Ivanka Trump has called the boycott misguided and political.

Fortune reports that her clothing line had a great 2016 despite the boycott. It may be too soon to tell, however. #GrabYourWallet got off the ground late in the final quarter of last year. 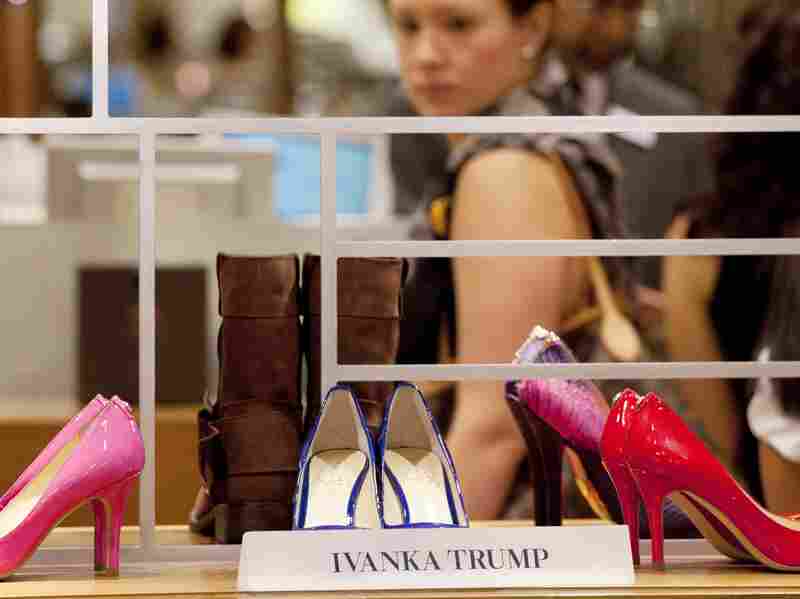 One of Grab Your Wallet's biggest targets is Ivanka Trump and companies that sell her fashion line of clothes, jewelry, shoes and accessories. Mark Lennihan/AP hide caption 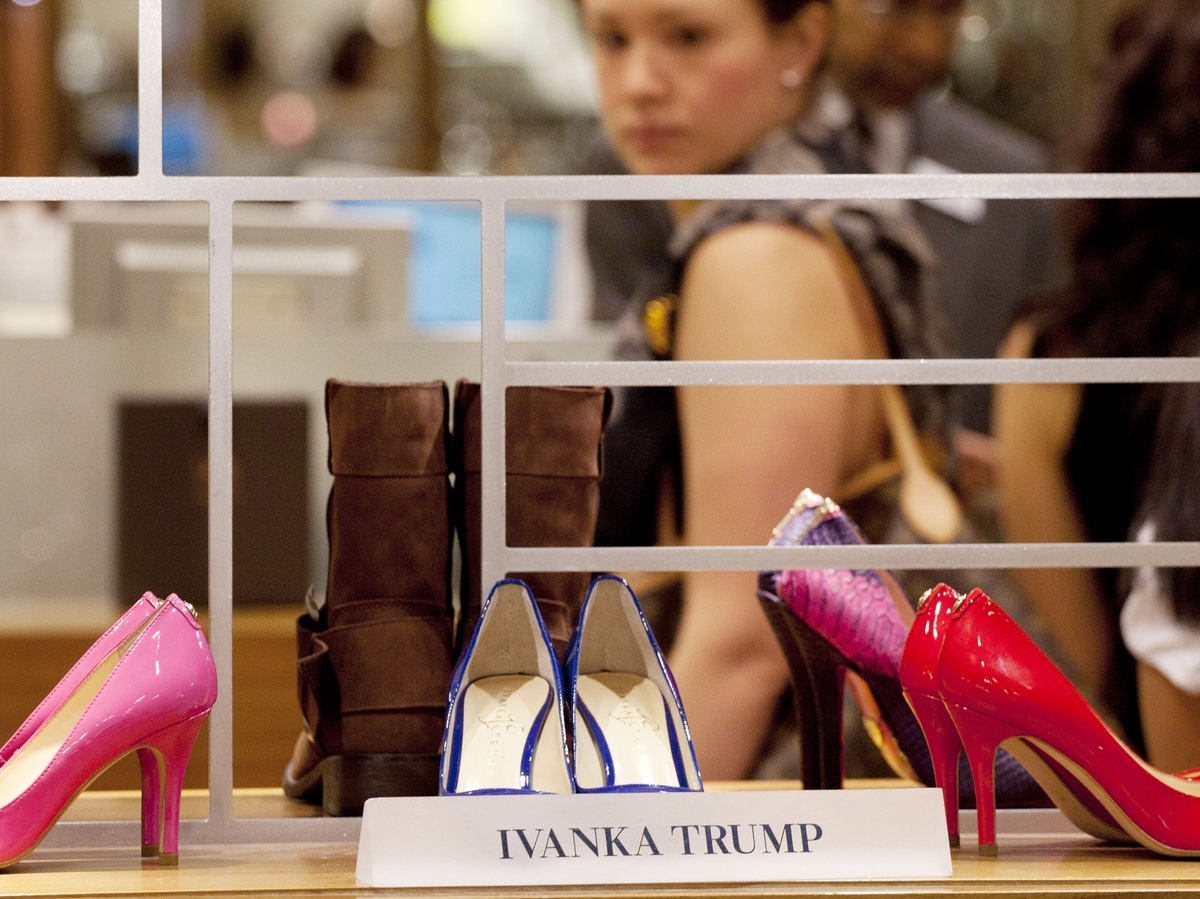 One of Grab Your Wallet's biggest targets is Ivanka Trump and companies that sell her fashion line of clothes, jewelry, shoes and accessories.

And Ivanka has pushed back in other ways. In her first interview since being made an official White House adviser, Trump recently told CBS This Morning that her lack of "public denouncement" of any of her dad's policies does not mean she's been silent with him.

"I think there are multiple ways to have your voice heard," she told the network. "In some case, it's through protest and it's through going on the nightly news and talking about or denouncing every issue on which you disagree with. Other times, it is quietly and directly and candidly."

"So where I disagree with my father, he knows it. And I express myself with total candor. Where I agree, I fully lean in and support the agenda and hope that I can be an asset to him and make a positive impact," Ivanka said.

Some Trump critics have long hoped Ivanka would exert as moderating influence on her father.

But Coulter isn't buying it.

She says Ivanka is making a mockery of the conflict-of-interest rules by putting her company in a trust run by family members — not a blind trust.

The White House power and influence of Ivanka Trump and her husband Jared Kushner are expanding, according to numerous news reports. Coulter sees no evidence Ivanka is having a tempering impact.

"You might as well try to housebreak a hyena," Coulter says. "Ivanka is not moderating him."

Coulter says one sure sign of the boycott's broader impact is the speed with which dozens of companies quickly stopped advertising on Bill O'Reilly's Fox News show in the wake of sexual harassment allegations against the host and settlement payouts.

"When O'Reilly Factor's advertisers proactively began jumping ship, I saw that as proof positive that consumer movements like #GrabYourWallet and Sleeping Giants are having an effect and helping companies be more thoughtful about their advertising choices and what those advertising choices mean about their own brands," she says.

Angie's List, the crowd-sourced website that reviews companies, emailed Coulter that it was pulling its ads from The O'Reilly Factor. Coulter says #GrabYourWallet supporters told her they were particularly upset that a "woman-founded business wasn't taking a stand for women at a critical moment and really rejoiced when they saw they had a positive impact on that decision.

"I think that there's just a lot of appetite right now to understand how we as consumers can use our spending power to promote inclusivity and respect in our society," she adds.

The boycott Coulter co-founded is just six months old. She says she's now having "lots of conversations" with a wide range of people and organizations about how to morph this movement into a wider, perhaps nonprofit vehicle, for taking on Trump and advocating for broader corporate social responsibility.

"#GrabYourWallet has taken on a life of its own, so I'm trying to understand what the right structure is for that going forward," she says. "It feels like this movement wants to be something more than it is today. There's a lot of momentum behind this. There's a lot of activity around it still, and I want to leverage that into something larger."