Accessibility links
ACT UP Turns 30, Uses Same Tactics To Boost Resistance Movement Against President Trump Veteran activists who helped make ACT UP and its affiliates a potent force in the fight against AIDS are now helping train activists opposed to the policies of the Trump administration. 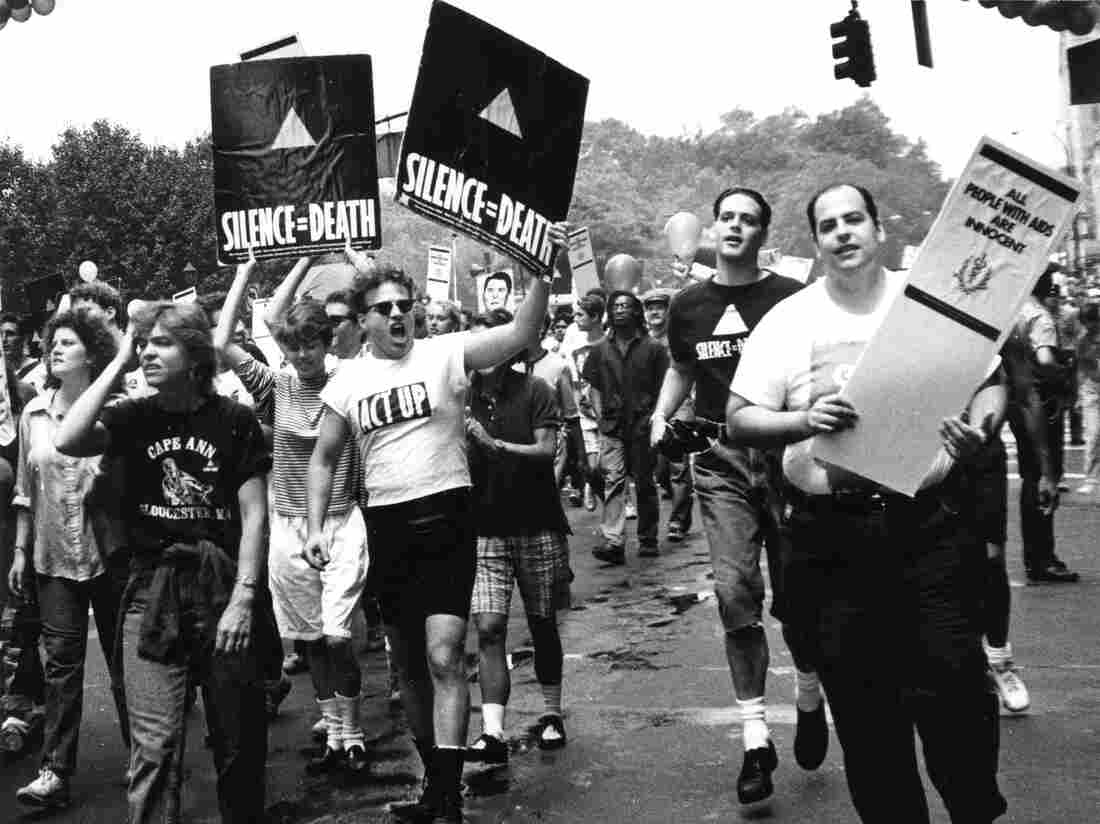 Members of ACT UP hold up signs and placards during the Gay and Lesbian Pride march in New York City, June 26, 1988. The New York Historical Society/Getty Images hide caption 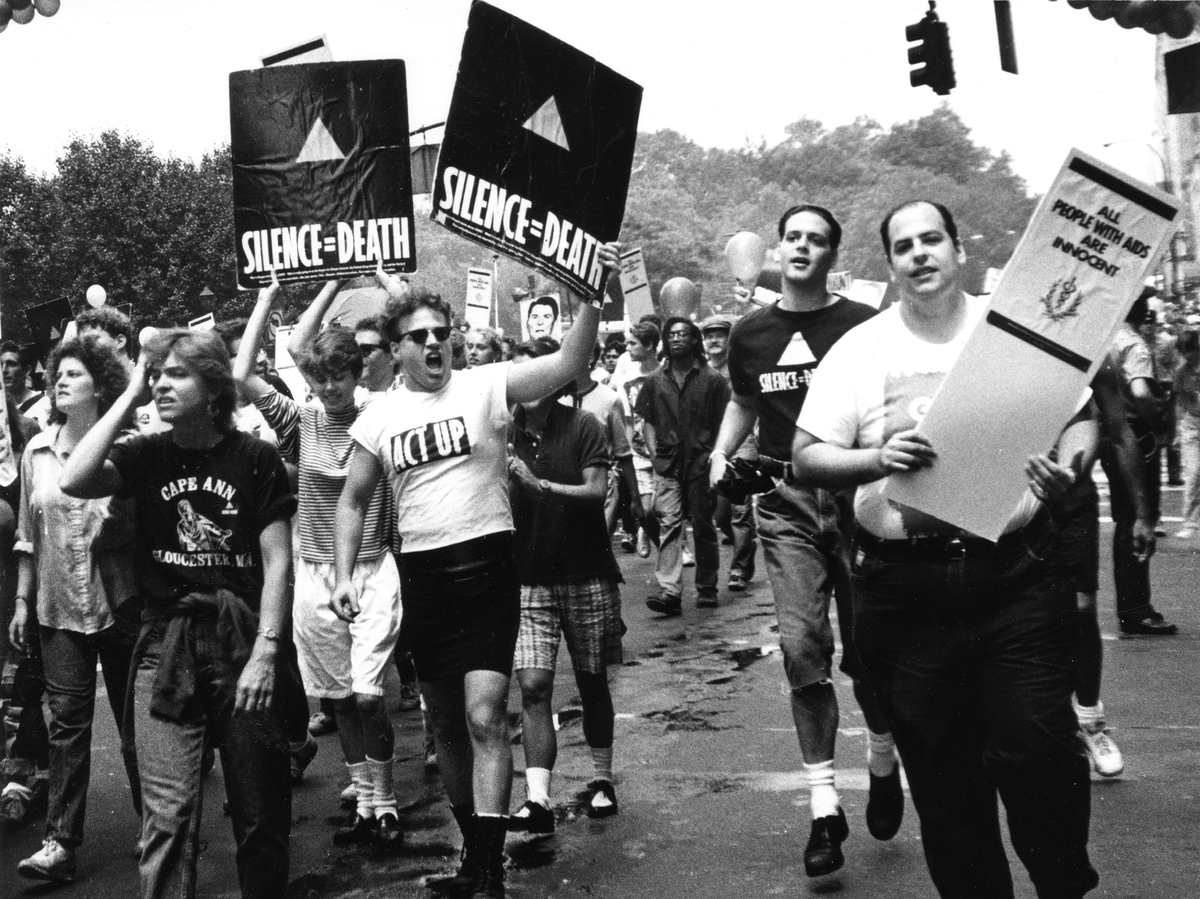 Members of ACT UP hold up signs and placards during the Gay and Lesbian Pride march in New York City, June 26, 1988.

Donald Trump's presidency is less than three months old, but in that time there have been massive turnouts for the Women's March and for Tax Day protests in cities across the country demanding that Trump release his returns. This coming Saturday, on Earth Day, scores of March for Science protests are expected.

Helping to guide these actions are veteran activists with the AIDS Coalition to Unleash Power — better known as ACT UP. Thirty years after the coalition's founding, some seasoned activists are dusting off their bullhorns and updating their direct-action playbooks to tap into the new wave of activism energized by opposition to Trump's policies.

Founded in 1987, ACT UP never settled for trying to push change quietly or behind the scenes.

It was loud, demanding and in-your-face with telegenic direct action, a protest that got serious attention and, occasionally, laughs.

Like the time members engulfed the suburban Virginia home of their nemesis, the late Republican Sen. Jesse Helms of North Carolina, in a giant canvas condom that read "Helms Is Deadlier Than A Virus."

Or when ACT UP members posed as news executives and bum-rushed Dan Rather during a live broadcast of the CBS Evening News at the start of the Gulf War.

Then there was the time they stormed the National Institutes of Health, pushing for changes in AIDS research, funding and clinical trials. Over an NIH foyer, activists unfurled a giant banner with their logo and slogan: Silence=Death.

I'm "the snarky, Machiavellian dude behind the Silence=Death image," New York artist and writer Avram Finkelstein says with a chuckle.

That slogan — black and white with a pink triangle — presaged the formation of the radical AIDS advocacy group ACT UP. The slogan helped change the way the world looked at AIDS. At one point, Silence=Death was the most powerful protest slogan around. It became an iconic backdrop to the group's chant for "ACT UP, FIGHT BACK, FIGHT AIDS!"

Now, at 65, Finkelstein is one of several ACT UP veterans from the 1980s and '90s who today are helping shepherd new protesters, training and strategizing, including the anti-Trump collective Rise and Resist.

"Many people are younger people who work with organizations that were formed by ACT UP. Or were in ACT UP themselves," he says.

He recently led a teach-in on design and imagery for Rise and Resist.

"All of the civil disobedience training is being done by the same exact people who did them at ACT UP," Finkelstein says. "So here is this perfect cross-section of this moment. Here is an intergenerational activist organization. And its meetings are in the community center a spitting distance from where the original ACT UP meetings took place."

In January, Rise and Resist took one of its first actions: Scores of members booked brunch reservations at restaurants in several Trump-owned properties including Trump Tower. Over eggs Benedict in the crowded eateries, protesters began to cough and cough some more. The "cough-in" protesters held up signs saying "Trumpcare is making us sick."

"That's the kind of mediagenic sort of action that ACT UP used to needle their opponent," says filmmaker and writer David France, who is behind the book and film How To Survive A Plague. "And Trump is an easy target for needling, and they're working on trying to exploit that weakness of his. The more time he spends in the early morning hours fashioning his tweets in response to perceived slights, the less time he has to advance his agenda." 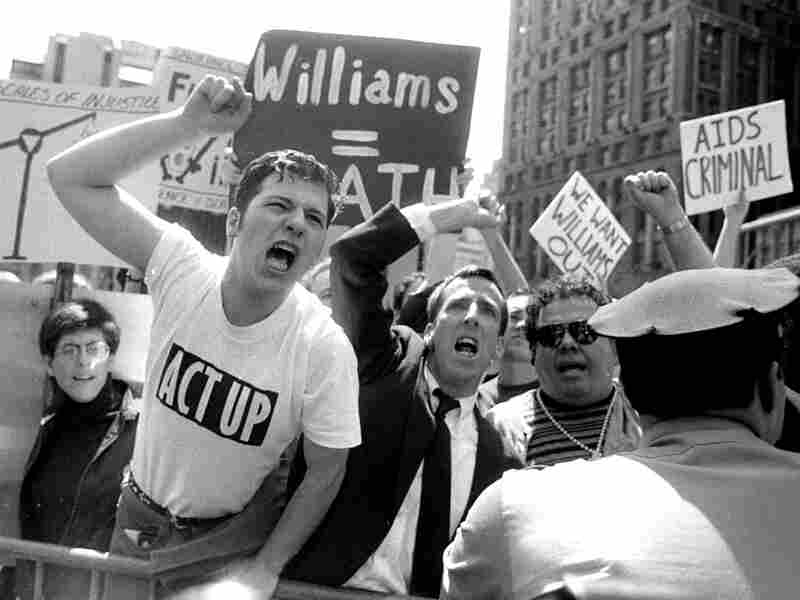 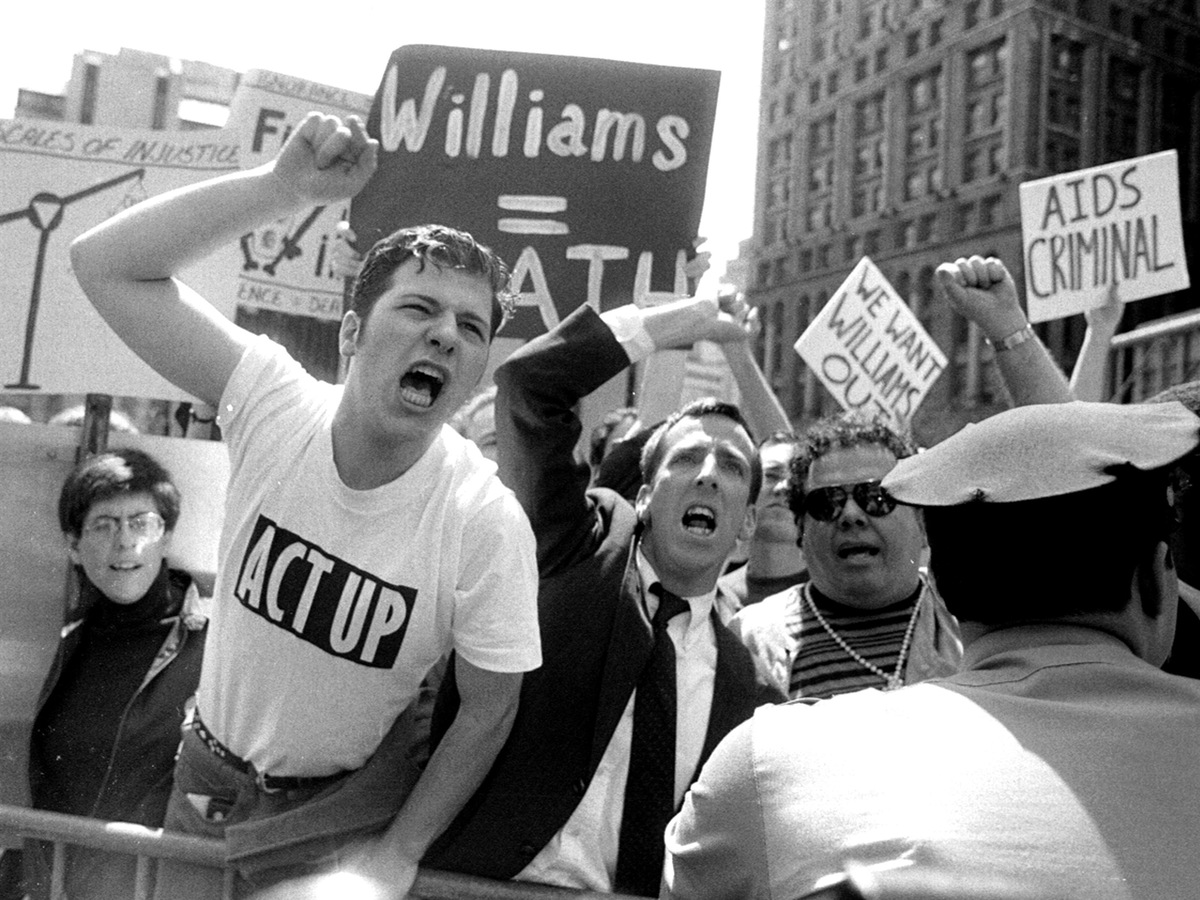 ACT UP protesters in front of City Hall in New York in 1992.

France and others note that the feeling of total powerlessness in the face of Trump and Republican control of Washington echoes the early days of the AIDS crisis.

"Younger generations, the millennials, and even Gen X and Gen Y, have the sense of never having had power, really," France says. "And it's kind of a learning experience for them to realize that there were times in history when others felt the same, and were yet not dispirited by it but found a way to plow through it and find that power."

ACT UP was certainly not immune to internal fissures and strategic stumbles. Some members broke off into subgroups. But ACT UP remained steadfast in its strategy of being bold, persistent and willing to be unpopular to foster change. It's a template Rise and Resist is trying to emulate, France says. 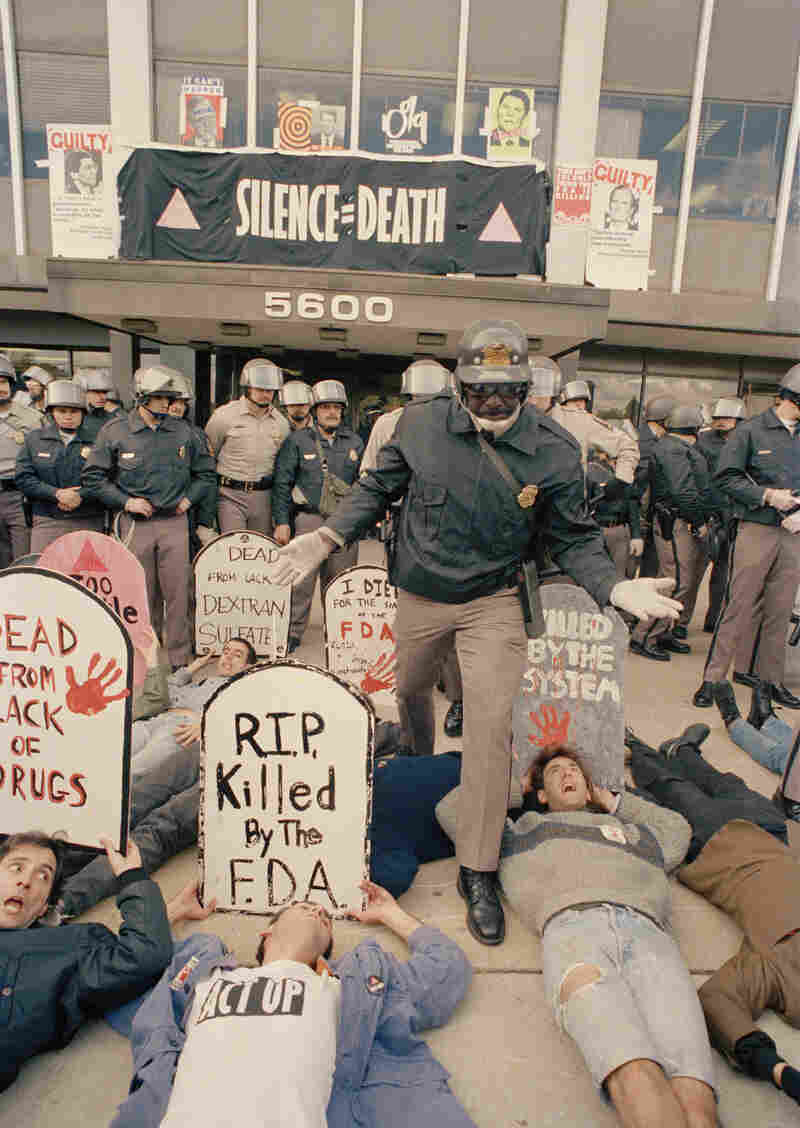 ACT UP demonstrators who were angry at the federal government's response to the AIDS crisis effectively shut down the headquarters of the Food and Drug Administration in Rockville, Md., on Oct. 11, 1988. J. Scott Applewhite/AP hide caption

"I think what they're doing, especially at Rise and Resist, is taking those tactics and strategies and bringing them to the modern era, and making them appropriate for the particular struggles being faced today," he says.

Grass-roots anger at Trump's policies has galvanized protesters on the left, including many new to political action.

While ACT UP is best-known for its direct-action protests, the group's potency came from a clear-eyed strategy and its well-organized committees, says Maxine Wolfe — another veteran gay-rights activist from ACT UP's earliest days who is now involved in Rise and Resist.

ACT UP had committees on health, research, PR, housing and more. They did their homework, Wolfe says, and helped ACT UP create a potent "inside-outside" strategy: demanding a seat of power alongside politicians and Big Pharma while keeping pressure up through creative street protests. The strategy helped turn HIV from a death sentence to a manageable condition.

"We had a women's committee, a people of color committee, the treatment and data committee," Wolfe recalls. "We lobbied peoples, we did civil disobedience. The idea there was that you could use not a huge number of people but a varied playbook," she says. "And [you] would keep coming at it until we won. Which we did."

What's not clear just a few months into Trump's presidency is which tactics and actions by Trump "resisters" will actually have an impact on public opinion and policy. There are sharp tactical disagreements within the inchoate grass-roots opposition to Trump's policies over what might prove most effective and sustainable.

On Both The Left And Right, Trump Is Driving New Political Engagement

There are ongoing Trump boycott efforts such as Grab Your Wallet as well as the get-off-the couch group Run For Something.

"It's the movements that are willing to take risks and willing to do bold action over time that are the most successful," says writer and activist L.A. Kauffman, author of Direct Action: Protest and the Reinvention of American Radicalism.

"Obviously you can't stay in crisis mode and at a fever pitch for year after year after year," she adds, "but I see a lot of people recognizing that this is the long haul. What the movements are doing together is creating a crisis for the Trump administration, and in so doing, managing to slow down some of the worst of the harm."

While ACT UP's activism centered on an array of complex issues, the central focus of HIV and AIDS was a unifying and organizing force. But anger at Trump is broad, diffuse and across a range of issues from health care to climate change.

"It's a different animal — there's not one single thing to organize against," Wolfe says. "What we need is how to sustain focus. You can't just do one action, let's say, against [senior presidential adviser Steve] Bannon. You have to do many such actions."

"We know now that nominally democratic governments don't have to listen to social protests," says activist and writer Micah White, who helped launch the Occupy Wall Street protests. "You can get 4 million people into the streets and there is no requirement in our Constitution or in our laws that the president has to listen. He's able to say, 'Thanks. Now go home.' And they go home."

White now advocates a rural, Internet-enabled progressive movement where activists get elected to local offices and prove they can govern.

"As social protesters, we need to stop with this naive belief that if we just get more people into the streets, then we'll get what we want. It's not true!" White says. 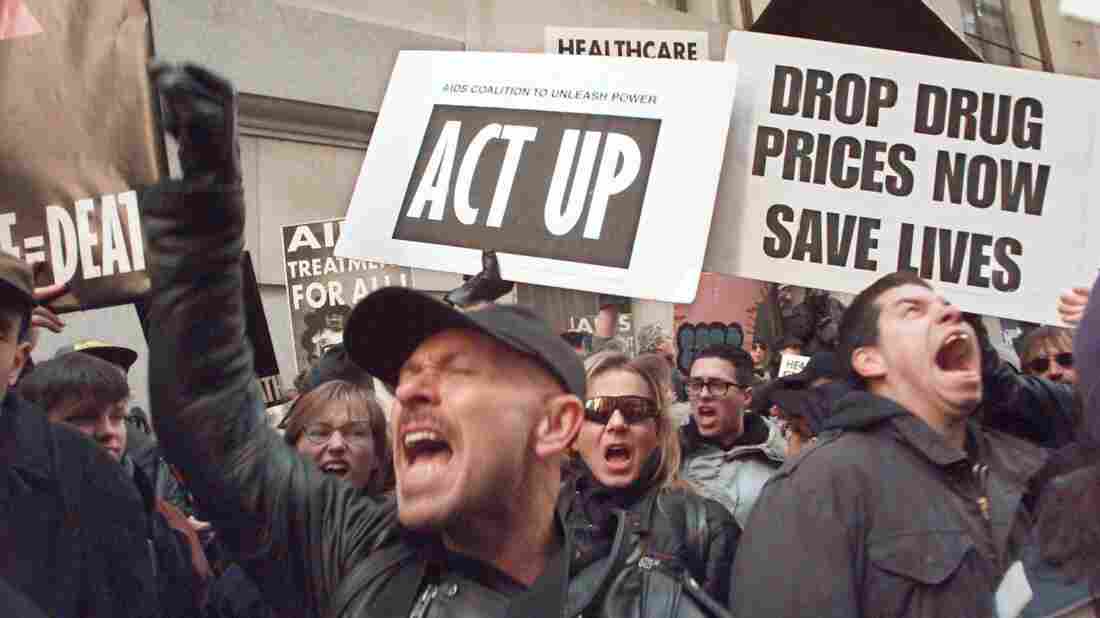 Protesters marked the 10th anniversary of the forming of ACT UP along Wall Street in New York City in 1997 by calling attention to the high price of AIDS drugs. Mark Lennihan/AP hide caption 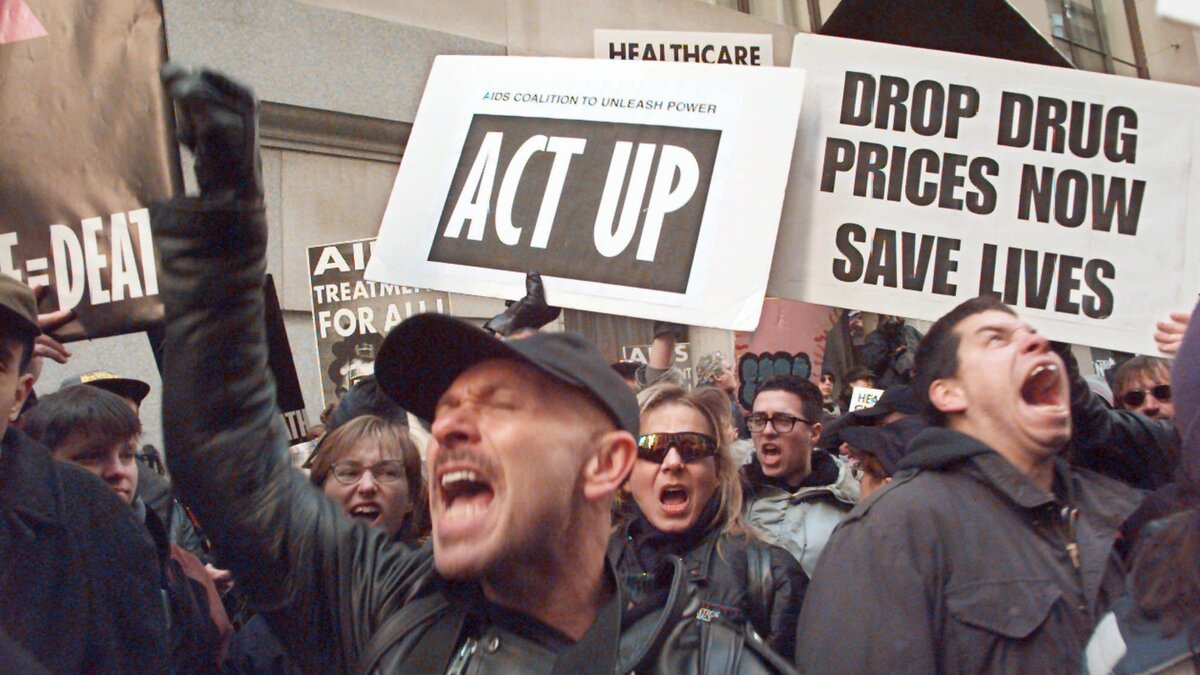 Protesters marked the 10th anniversary of the forming of ACT UP along Wall Street in New York City in 1997 by calling attention to the high price of AIDS drugs.

Finkelstein notes that he did not come up with the Silence=Death logo quickly on the back of a napkin one night over a beer. It was, he says, a deliberative, iterative process with five friends that took about six months to produce. He's author of the forthcoming book After Silence: A History of AIDS Through Its Images.

Finkelstein is not against big marches like January's massive Women's March in cities across America and the world, the recent release your taxes protests, or the upcoming Earth Day March for Science.

But his lesson from creating the iconic ACT UP logo: There is tremendous power in smaller actions that can reverberate in unexpected ways.

"If that million people were broken into small groups of four and five, think of the power that could have," Finkelstein says. "Pussy Riot was four people with a boombox, and it totally changed the way we thought about Putin's administration."

Rise and Resist and several other anti-Trump groups are still groping, in these early days, with which tactics might have a real impact with a famously media-savvy mogul turned president, who may be thin-skinned but knows how to punch back.

"A lot of supersmart people that I know are so distracted by the scorching lava flow of Trump's campaign, and now his first days in office, that they seem to be unable to think strategically about it," Finkelstein says. "That surprises me, frankly. The toolbox for doing so is right in front of us."