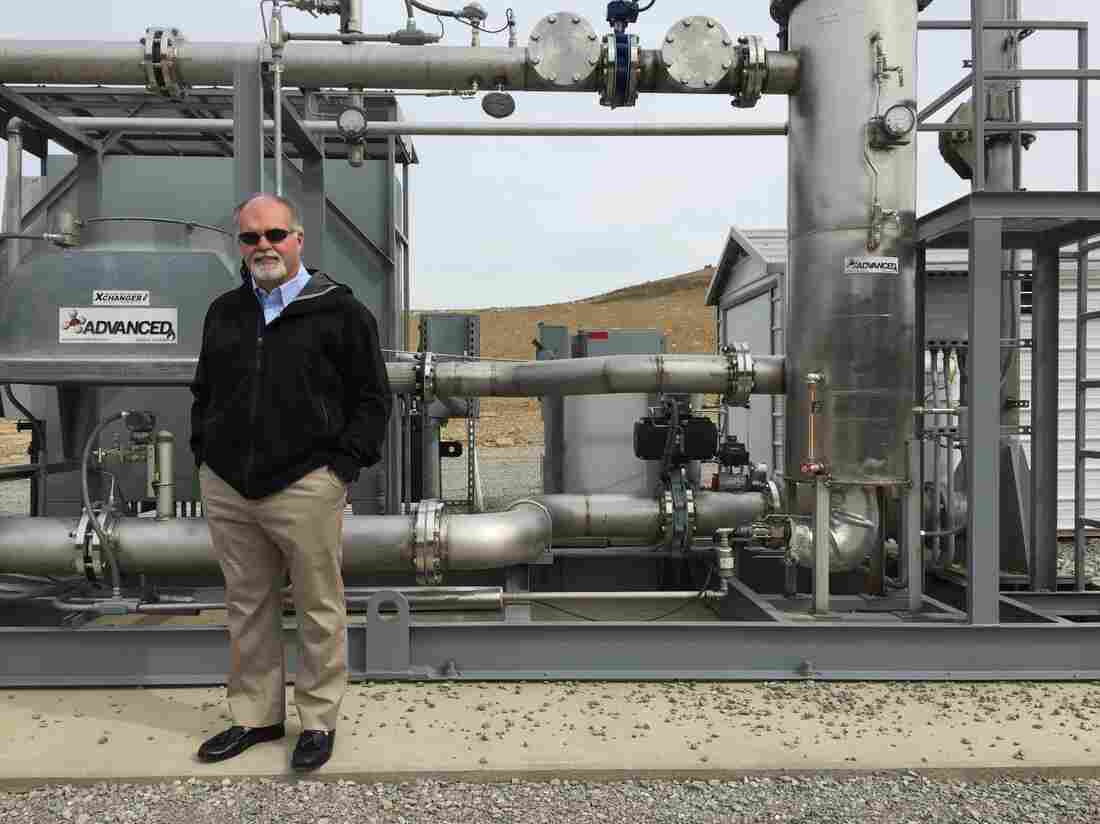 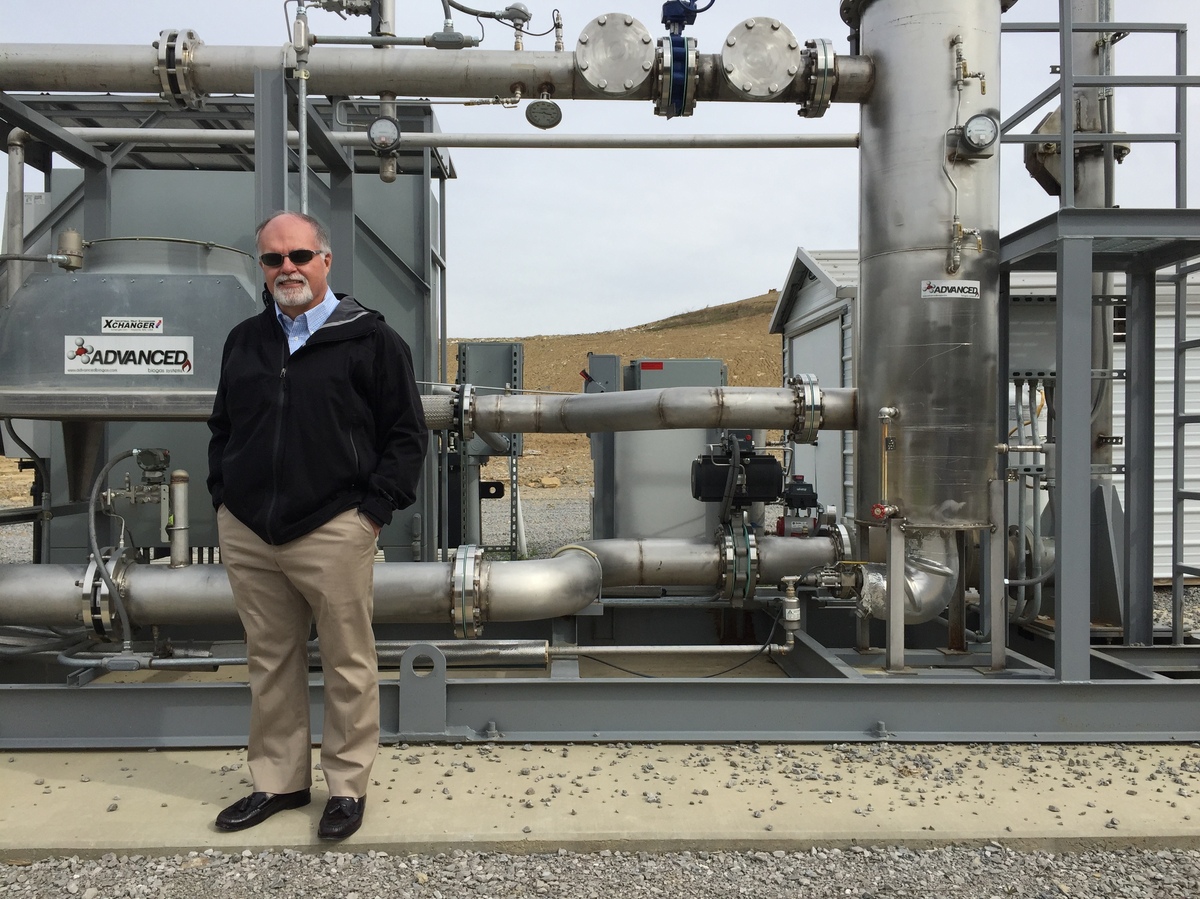 Kevin Butt's job is to find cleaner ways to power Toyota. One of the hardest places to do that is at the automaker's sprawling plant in central Kentucky, a state where nearly 90 percent of electricity still comes from coal.

Butt points out a new engine assembly line, where a conveyor belt moves in a slow circle. He says it was specially designed with a more efficient motor. There are also enormous fans overhead and LED lights, all changes that save millions.

"I mean, what company doesn't want to reduce their energy bill," he says.

That's the business case for going green. And in a lot of places around the country, solar and wind are now the cheapest energy option. But a few years ago, Toyota decided that by 2050 all of its operations, all around the world, should be zero-carbon.

It's part of a larger business shift. In Kentucky, General Motors, Ford, Walmart, L'Oreal and others also have big goals to reduce emissions. Even the state's beloved bourbon makers are starting to look at renewables.

"There's not enough renewable energy being manufactured right now for all of us to do what we say we want to do," Butt says.

That's true globally, he says, and it's especially true in Kentucky, where people like to say coal isn't just the economy, it's the culture.

Before this job, Snavely spent 35 years in the coal industry. His office is now working with companies — he calls them customers — to help develop renewable energy. But Snavely says he struggles with whether "the growth of renewables [comes] at the expense of coal. Is it a bigger pie, or is someone taking a slice of our pie?"

Kentucky, unlike many other states, has no mandate to require a certain share of renewable energy. The state joined two dozen others in a lawsuit challenging President Barack Obama's signature climate policy, the Clean Power Plan, which would have shuttered hundreds of coal-fired power plants. Snavely says coal built his state's economy, creating some of the cheapest power in the country.

"We have industries in Kentucky that would not be here if we didn't have such low electricity rates," he says.

President Trump's order to start dismantling the climate regulation was a victory for Kentucky. And yet, it may not do much to stop the steady decline of coal.

"The future is renewables and the large corporations that want renewables," says Jim Gardner, who used to regulate power companies as a member of Kentucky's Public Service Commission.

Two years ago, Gardner was struck by an encounter with a local man who worked remotely for Facebook. He told Gardner that big corporations were actually deciding where to expand based on where they could get renewable energy.

"He made it seem like there was literally a list with a lot of states with big X's marked in," says Gardner, "so that Facebook and others were not looking because [some states] were not going to be open to renewables."

The South Has Been Slow To Harness Its Wind, But That's Changing

The Public Service Commission worried the state was missing out. It quietly issued an official statement — "a clear signal to people outside of the state," says Gardner — that if a big customer wanted renewable energy, Kentucky's utilities could cut a special deal to provide it.

That gave utilities permission to offer renewable energy. But they still face challenges to produce it.

The state's cheap coal makes it harder for renewables to compete, and to see a return on investment. What's more, Kenya Stump, of the Energy and Environment Cabinet, says Kentucky has only moderate potential for solar power, and not much at all for wind. She says hydro power holds the most promise.

Stump is working with companies that want to develop renewable power, but she doesn't foresee a major spike anytime soon. "Right now renewables are starting to compete on costs, but not reliability," she says. But she adds that once battery technology develops and solar or wind power can be stored, "all bets are off."

Kentucky's utilities are also highly regulated. An energy activist says he's been heartened by a shift in the state's attitude, but thinks officials could do a lot more to encourage renewables.

"The sun in Kentucky is as strong as it is in North Carolina and Ohio and New York, where the solar industry is employing tens of thousands of people," says Andy McDonald of the Kentucky Solar Energy Society. "Kentucky is not limited by our resources; it's limited by our policies."

None of those challenges is stopping a slow transition.

"This tract is about 60 acres," says David Crews, standing in a freshly mowed field where East Kentucky Power Cooperative is about to install 32,000 solar panels. It will be one of the state's first utility-scale solar farms, and it's there by popular demand — from businesses. Crews says some companies don't mind paying a bit more to meet their sustainability goals.

East Kentucky Power has no plans to build another coal plant. Crews says just because the new president doesn't want to limit carbon emissions, doesn't mean the next one won't.

"The seesawing of regulations when we're trying to make a 50-year investment, it will drive you crazy," he says. "And that wouldn't be good for our customer base."

The utility is marketing its new solar farm, and if demand is strong enough Crews says it will add more panels.

At Toyota's plant in central Kentucky, Kevin Butt envisions installing solar panels on the roof. The company is also researching fuel cell technology, seeking the breakthrough that could help it eliminate carbon emissions. But for now, he's getting creative about finding renewable energy where he can.

He drives me down a rutted dirt road, through towering brown hills. It's a landfill, and here and there, things stick up.

"The black tube coming out," he says pointing, "it's a methane capture well."

The methane is released as the trash rots. When it goes into the air, methane is a dirty greenhouse gas, but last year Toyota set up a generator here to turn it into clean electricity. The power is sent through an underground line, straight to the Toyota plant 6 miles away, bypassing the local utility altogether.

"They either have to put it in their system," Butt says, "or people will be looking at alternate ways to get that energy in a renewable form."

A previous version of this story incorrectly said 90 percent of Kentucky's energy comes from coal. It's actually 90 percent of the state's electricity.