Accessibility links
'Groundhog Day' Is Now A Musical, And Here Are The Songs Stream the original cast recording to the new Broadway musical before its release.

Stream The Album In Its Entirety Before Its Release On Friday

Note: NPR's First Listen audio comes down after the album is released. However, you can still listen with the Spotify or Apple Music playlist at the bottom of the page 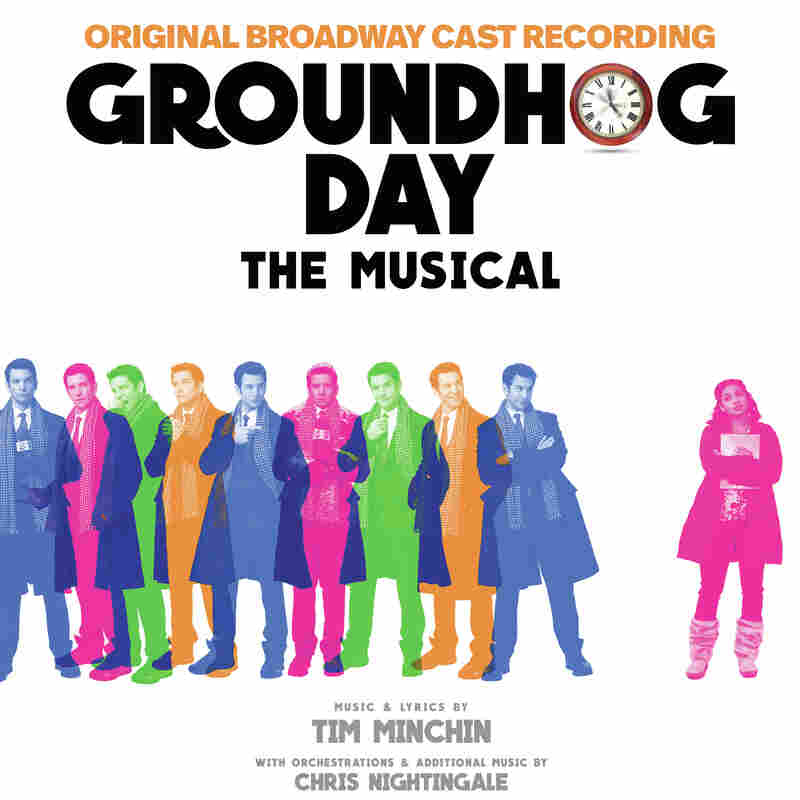 Would you believe this time, Ned Ryerson gets a big ballad about the meaning of life?

The 1993 film Groundhog Day made Ryerson, played by Stephen Tobolowsky, only one of many annoyances that crossed the path of Phil Connors, a dyspeptic weatherman forced to live the same day over and over. Specifically, Phil lives and relives Groundhog Day in Punxsutawney, Penn., home of the famous groundhog, Punxsutawney Phil. Now, the movie has been transformed into a Broadway musical of the same name, and yes: Ned gets a story to tell, an emotional arc, and a big, soaring ballad called "Night Will Come." It's ... well, it's about death.

The music and lyrics for Groundhog Day come from Tim Minchin, who did the same for the highly successful Matilda The Musical. And lest you fear the film has been forgotten or fallen into uncaring hands, the book for the show was written by Danny Rubin – who wrote the screenplay for the film with director Harold Ramis.

One pitfall in a Broadway adaptation of a well-loved film – perhaps more so in the age of easy streaming – is that it dares to revisit a fixed performance that's been easily available to watch and rewatch for, in this case, almost 25 years. Here, that performance was by Bill Murray, the original Phil Connors. It was wise to swerve away rather than imitate: Where Murray played Phil as something of a hangdog slob, the musical imagines him as a slick pretty boy. This is a grinning Phil, a Phil you would expect to have veneers. Andy Karl, who plays him, has done plenty of Broadway (including Rocky and Jersey Boys) and recently ended a run on Law & Order: SVU. (Poor Dodds.) Karl plays Phil's initial realization of his predicament with less tamped-down confusion and more frantic paranoia than Murray did, despite close similarities between the scripts. It's a delightfully physical performance, a fact that was regrettably brought home during a Broadway preview on April 14, when Karl hurt his leg jumping over somebody and finished the night using a cane. (At least he didn't hurt himself in vain: he was injured during the big tap number "Philanthropy," which is great, great fun on stage and sadly hard to entirely appreciate on an album.)

The role of Rita, played by Andie MacDowell on screen, is beefed up considerably and reinterpreted by Barrett Doss, in whose hands she's more self-possessed and interesting than the film's Rita was – though she's still ultimately tasked with playing a woman who falls in love in a single day. That's never going to come from a place of precise realism, but they've done what they can.

It's not a dig to say that the music from Groundhog Day sounds like what a lot of big musicals sound like right now: It's rock-tinged in some places and pop-tinged all over, studded with ballads, and spiffed up with funny pastiches like "Hope," Phil's slow-building screamer. "Hope" sounds like it's an encouraging song about persevering, until you realize it's about Phil persevering in his quest to end it all rather than endure one more Groundhog Day. (On stage, it accompanies his many suicide attempts and features some very clever staging to get him to wake up back in bed over and over when he fails.) The same goes for the barroom country knockoff "Nobody Cares," which honors the country tradition of performative despair but spins it in the direction of freedom – as Phil does, in the early going, with the lack of consequences he's discovered. (My favorite supporting player in the stage production, by the way, is Raymond J. Lee, who plays the barstool-dwelling Ralph with the lovable cluelessness of any good stage drunk.)

Some of the songs here lose context without the on-stage visuals: the opener "There Will Be Sun" sounds more serious than it is when you see it on stage sung by bundled-up people waving thermoses as they wait to see a groundhog. And much of what's going on in the track "Day Three," when Phil truly begins to panic, doesn't translate when all you're hearing are his cries of misery.

It's common in musicals for verses to revolve around memorable choruses, but Groundhog Day cuts the other way. Take "Stuck," in which Phil seeks help from various unhelpful professionals in getting himself out of his time loop. Everything is in the clever verses, while the chorus is little more than a light anchor that keeps it from getting entirely away from itself. Similarly, "One Day," Doss' big number laying out Rita's romantic fantasies, relies more on densely packed storytelling, intermittently indifferent to traditional rhyme and meter in favor of letting lines spin out in ways that are surprising rather than neatly satisfying.

To return to Ned's ballad, it's one of two in the second act (the other being "Playing Nancy," sung by a woman Phil has seduced and ditched on one of his days in Punxsutawney) that represent a far more earnest effort to explicate emotional themes than you'll find in the film. The disadvantage to giving a character like Nancy a whole song is that she's someone we don't spend all that much time with otherwise, which can make her story seem a little disjointed from the rest. But the substantial advantage is that Minchin and Rubin have put some flesh on the bones of the character of the disposable woman standing in the way of true love. And the show's greater emotional directness and its retreat from irony serves that story of true love very well. As funny as Murray is in Groundhog Day, Karl is a more persuasive romantic lead, and musical baubles like "Everything About You" are a great help.

It seems only right that the show closes with "Seeing You," which could just be a soaring wrap-up, but which leans heavily into something almost like an outlaw cowboy ballad before finding its way into something more intimate. Phil Connors: turning misbehavior into love since 1993.

Groundhog Day The Musical is out digitally April 21.