Accessibility links
Once Routine, ICE Check-Ins Now Fill Immigrants In U.S. Illegally With Anxiety Thousands of immigrants across the country are unsure what to expect when they report for required check-ins with ICE. Some have been detained on the spot, leading to widespread fear and stress. 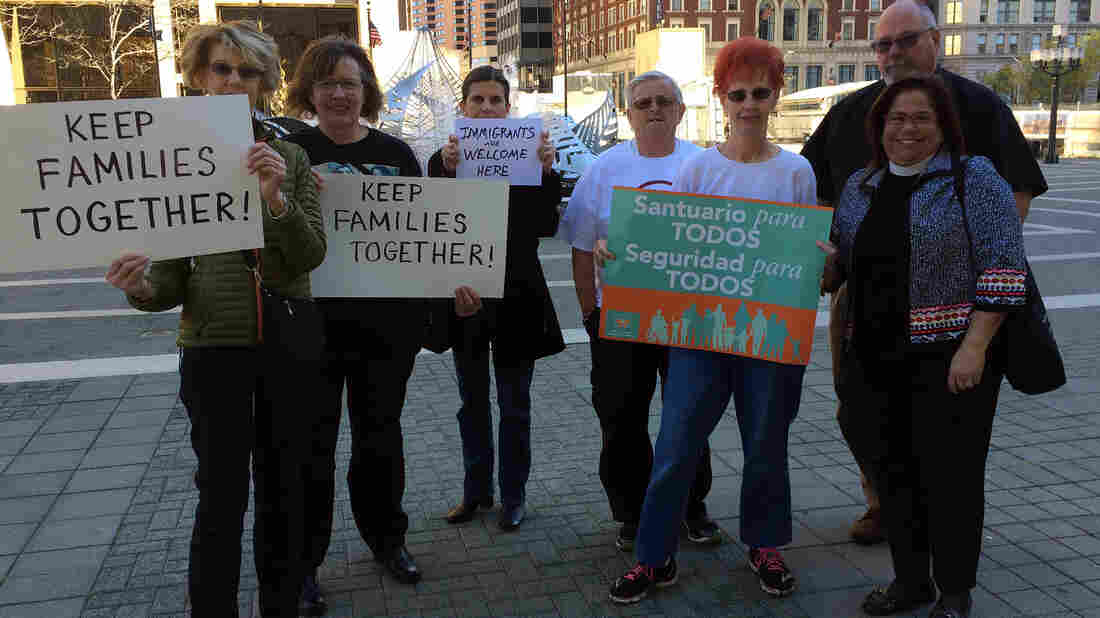 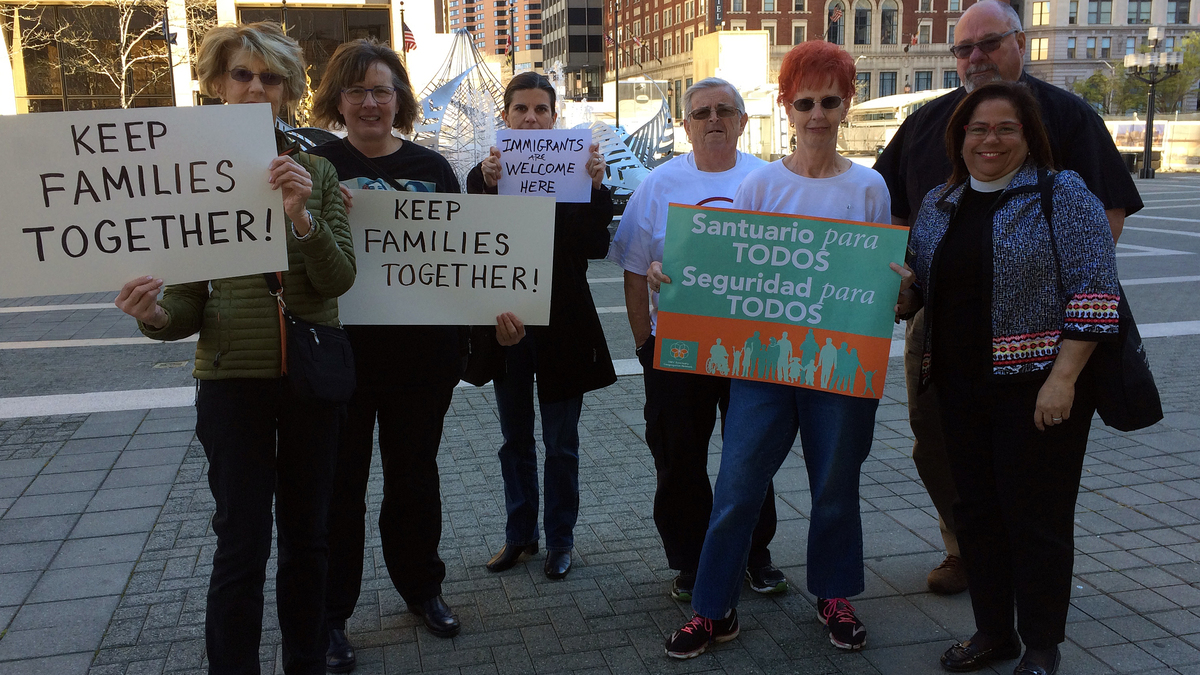 Concerned citizens show support for immigrants checking in with federal immigration agents in Baltimore this month.

Florinda Lorenzo has been in the U.S. illegally for more than a decade but checks in with federal immigration agents in Baltimore several times a year. Until recently, it had become routine, almost like a trip to the dentist.

Many immigrants who are here illegally — like Lorenzo — are not in hiding. Hundreds of thousands of them report to U.S. Immigration and Customs Enforcement on a regular basis. They've been allowed to stay because past administrations considered them a low priority for deportation.

But with the Trump administration's crackdown on illegal immigration, that once-routine check-in has become a nerve-wracking experience. In recent weeks, some immigrants say they've been detained without warning at their ICE check-ins.

"It creates a lot of chaos for me," Lorenzo says through an interpreter. "I know lots of people are getting deported now, and I wouldn't want to be deported." 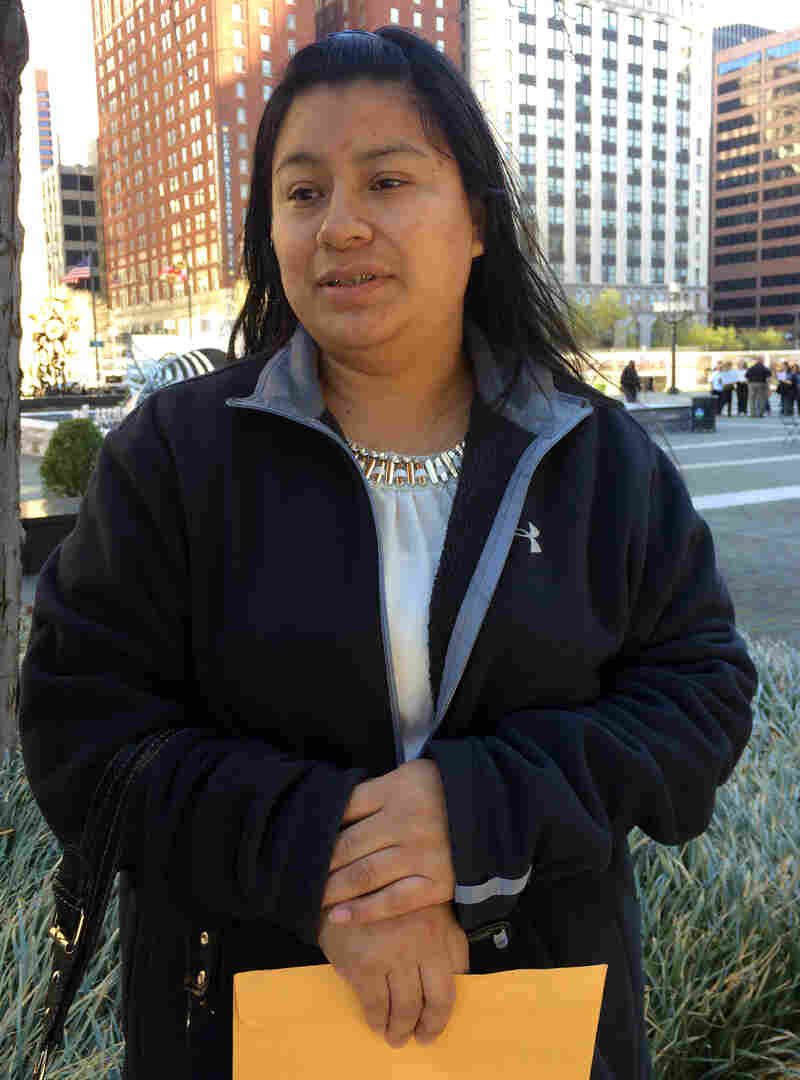 Florinda Lorenzo came to the U.S. from Guatemala 14 years ago. She checks in with ICE regularly — a requirement stemming from a 2010 arrest, though the charges were later dropped. She says the check-ins have become "painful and stressful" because she's worried she will be detained. Marisa Penaloza/NPR hide caption 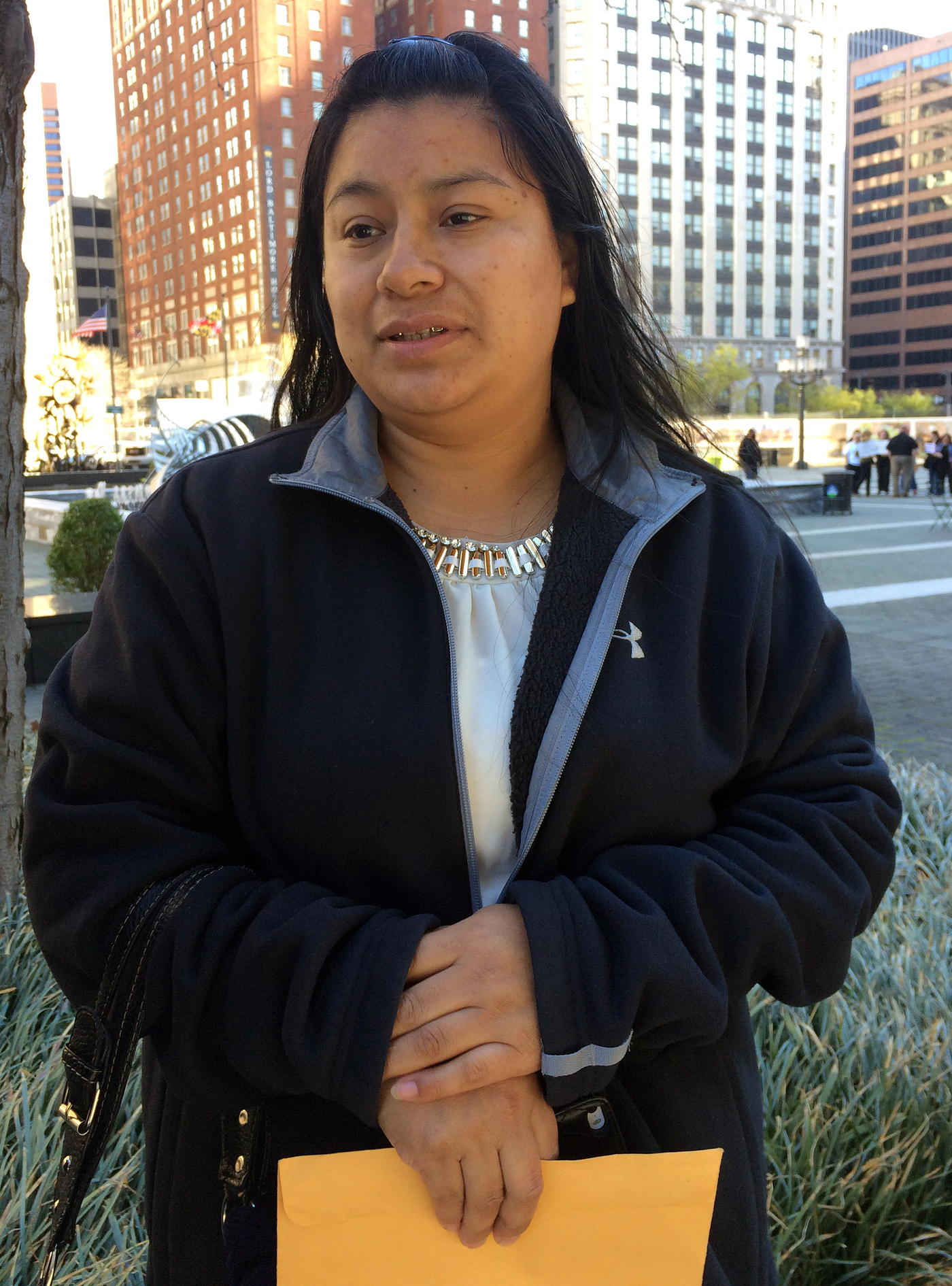 Florinda Lorenzo came to the U.S. from Guatemala 14 years ago. She checks in with ICE regularly — a requirement stemming from a 2010 arrest, though the charges were later dropped. She says the check-ins have become "painful and stressful" because she's worried she will be detained.

Lorenzo came to the U.S. from Guatemala 14 years ago. She has three children, two of them U.S. citizens who were born here. Lorenzo was arrested in 2010 and charged with selling prepaid phone cards without a license. The charges were dropped, but she's been required to check in with ICE since then.

Before her most recent appointment earlier this month, Lorenzo looked nervous. Her eyes were red.

A few dozen friends gathered to pray and show their support — both for Lorenzo's sake, and for ICE officials, in case they were watching. Nick Katz, a lawyer with CASA de Maryland, an immigrant advocacy group, accompanied Lorenzo to provide legal help in case she was detained.

Across the U.S., judges have issued final removal orders for more than 900,000 people in the country illegally. Many remain as long as they check in regularly with ICE.

Under the Obama administration, they were not considered priorities for deportation because they had clean criminal records, or strong ties to their communities. The Trump administration, however, is taking a more aggressive enforcement stance.

President Trump signed executive orders that broadly expanded the number of people who are priorities for deportation. That category now includes many immigrants whose only offense may be entering or staying in the country illegally.

Hans von Spakovsky, senior legal fellow at the Heritage Foundation, a conservative think tank in Washington, applauded the move. Von Spakovsky says criminals should be the priority. But, he says, that doesn't mean everyone else should get a free pass.

"You're in the United States illegally; you broke the law to come here illegally," von Spakovsky says. "And the government agency is basically saying, 'That's OK, we're not going to do anything about it.' That just to me is a complete violation of the rule of law."

An ICE spokeswoman did not respond to questions about the check-ins.

Several cases of unauthorized immigrants being detained at their ICE appointments have gotten widespread attention. That could have unintended consequences, says Alonzo Pena, who served as deputy director of ICE in the Obama administration. If agents detain large numbers of immigrants at their check-ins, he says, other immigrants may decide it's too risky to report.

"It's going to send a bad message to others, and it's going to really backfire," Pena says. "They lose faith in the system ... and you don't know where they're at.

"There's nothing good that will come out of that," he says.

Lorenzo emerges from her appointment in the ICE field office with a smile on her face.

"I feel very happy right now. ... My heart isn't as heavy anymore," Lorenzo says. "I don't have the words, but I feel relief."

Lorenzo found out that she can stay, at least for a few more months. She doesn't have to check in with ICE again until October. But neither Lorenzo nor her lawyers can say what will happen when she does.

A previous photo caption incorrectly said a group of supporters of Florinda Lorenzo had gathered in Baltimore. They were concerned citizens.