Accessibility links
Trump Lost More Of The Asian-American Vote Than National Exit Poll Showed Less than one-fifth of voters in the fastest-growing racial group in the U.S. supported Donald Trump in the 2016 election, according to new results from the largest exit poll of Asian-American voters. 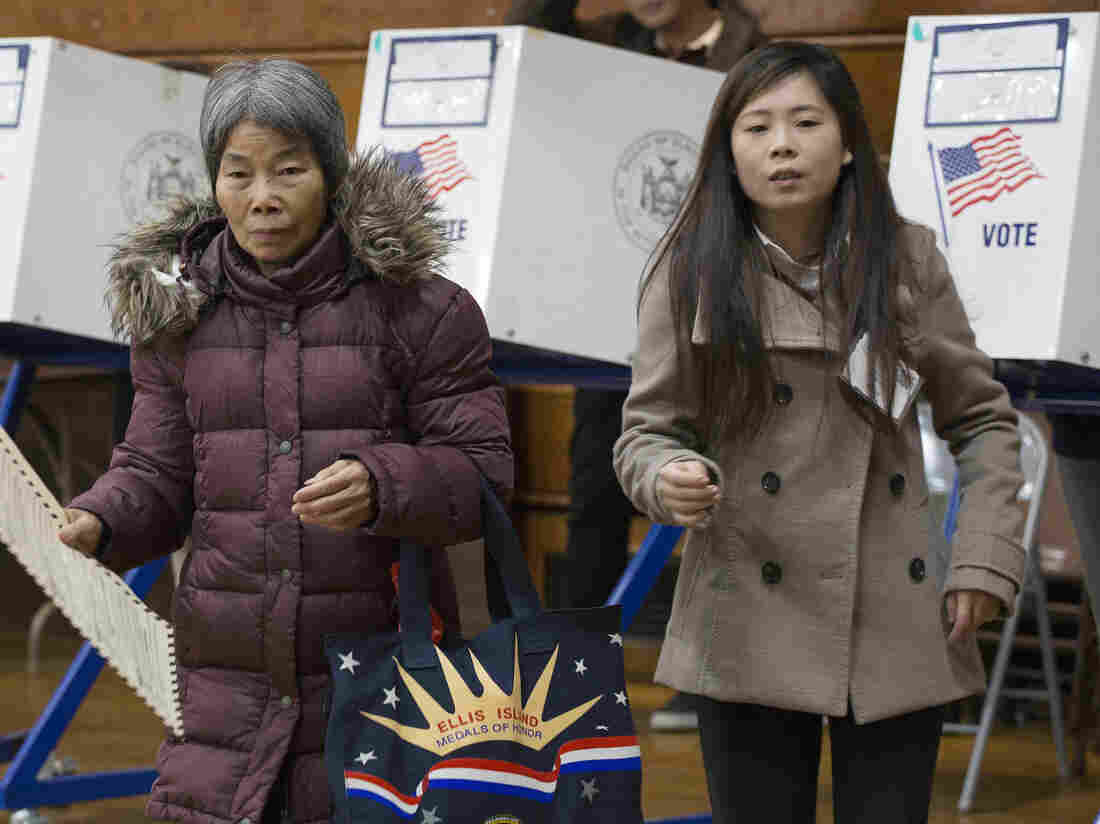 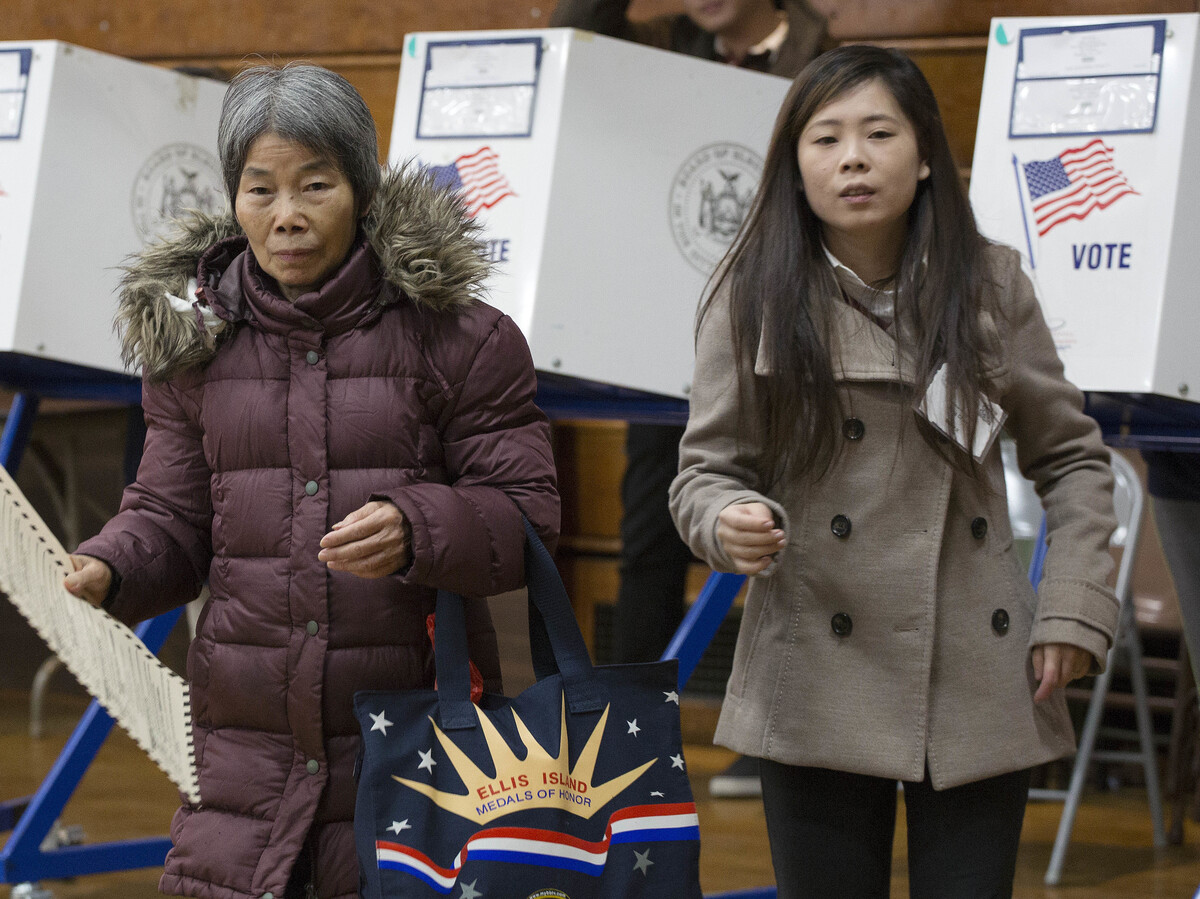 By all accounts, President Trump did not win the Asian-American vote in 2016. But the size of Hillary Clinton's margin of victory with voters in the fastest-growing racial group in the U.S. depends upon which exit poll you rely.

The National Exit Poll, funded by the major national media organizations, shows that Clinton won roughly two-thirds (65 percent) of Asian-American votes, while Trump received just over a quarter (27 percent), according to pollsters at Edison Research.

Asian-American support for Clinton was even more pronounced, though, in exit polling by the Asian American Legal Defense and Education Fund, or AALDEF, which provided NPR a preview of its latest report.

According to AALDEF's poll, Clinton's support was closer to winning four-in-five Asian-American voters (79 percent) with just 18 percent for Trump.

The difference in the results lies, in large part, because of how the polling was conducted. AALDEF surveyed close to 14,000 Asian-American voters, more than 14 times the number of Asian-American participants in Edison Research's poll.

How Asian-American Voters Went From Republican To Democratic

Similar to a Latino Decisions exit poll of Hispanic voters, the wider sample and the wider variety of languages likely means the AALDEF exit poll is more accurate.

At 18 percent, Trump fared slightly worse with the Asian-American vote than Mitt Romney, who won 21 percent in 2012, and John McCain, who won 23 percent in 2008, according to previous exit polling by AALDEF.

But the Republican-Democratic split last year remained fairly similar compared to those of the last two presidential elections, proving once again that Asian-Americans as a whole vote for Democratic candidates in national elections. Clinton received her strongest support from South Asian-American voters, including those of Pakistani, Bangladeshi, Indo-Caribbean and Indian descent.

A greater share of Asian-American Republican voters (20 percent) did cross party lines to vote for the Democratic candidate compared to 2012 (13 percent) and 2008 (17 percent). Trump also saw a drop in support from Vietnamese-American voters, historically a base of Republican support among the Asian-American electorate. While 54 percent supported Romney and 67 percent supported McCain, Trump only won 32 percent of the Vietnamese-American vote.

Jerry Vattamala, who runs AALDEF's exit polling, attributes these shifts to Trump's campaign rhetoric targeting immigrants and Muslims. "There was a big departure from the established party stances on policies that have been in place for decades. Then, there was the specific targeting of Asian countries like China," said Vattamala, director of AALDEF's democracy program.

Still, while Clinton received the majority of votes among Asian-Americans born in and outside of the U.S., Trump received a greater share of votes from foreign-born voters (22 percent) than from those born in the U.S. (8 percent).

It's a sign of the nuances within a diverse and growing voting group that, Vattamala says, saw unprecedented outreach efforts from presidential campaigns last year despite its relatively small size compared to other racial groups.

Support from Asian-Americans has been a challenge for the Republican Party and could continue to be so in the coming years. Trump won an Electoral College victory last November, but lost the popular vote. Asian-Americans preferred Clinton by a 2-1 margin.

Looking ahead, the economy and jobs are the most important issues Asian-American voters want the Trump administration and Congress to work on. The exit poll also found that a majority supports stricter gun-control laws; an overhaul of immigration laws that includes a path to citizenship; and laws protecting LGBT people from discrimination in employment, housing and public accommodations. (A fissure point among Asian-American voters was a question about police accountability, which drew the sharpest divisions between different ethnic and age groups.)

"The parties and candidates will be well served to make sure that the voters are being treated in a fair way and having their needs addressed," Vattamala says. "Especially in these swing states and in close races, Asian-Americans can very well be the difference in who wins and who loses."