Accessibility links
'I Basically Ran On Adrenaline': A Staffer Remembers Obama's White House Alyssa Mastromonaco worked in the West Wing for six exhilarating and exhausting years. She describes that era in her new memoir, Who Thought This Was a Good Idea? 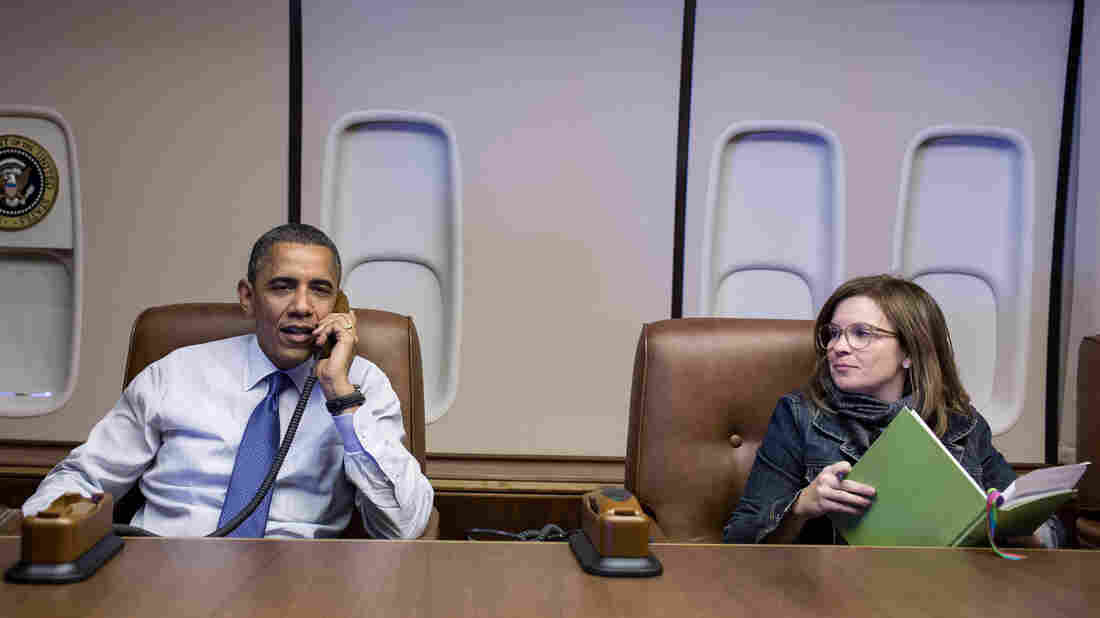 Alyssa Mastromonaco sits with President Barack Obama aboard Air Force One in 2012. Mastromonaco served as the president's director of scheduling and advance from 2009 until 2011, then became his deputy chief of staff for operations from 2011 until 2014. Pete Souza/The White House hide caption 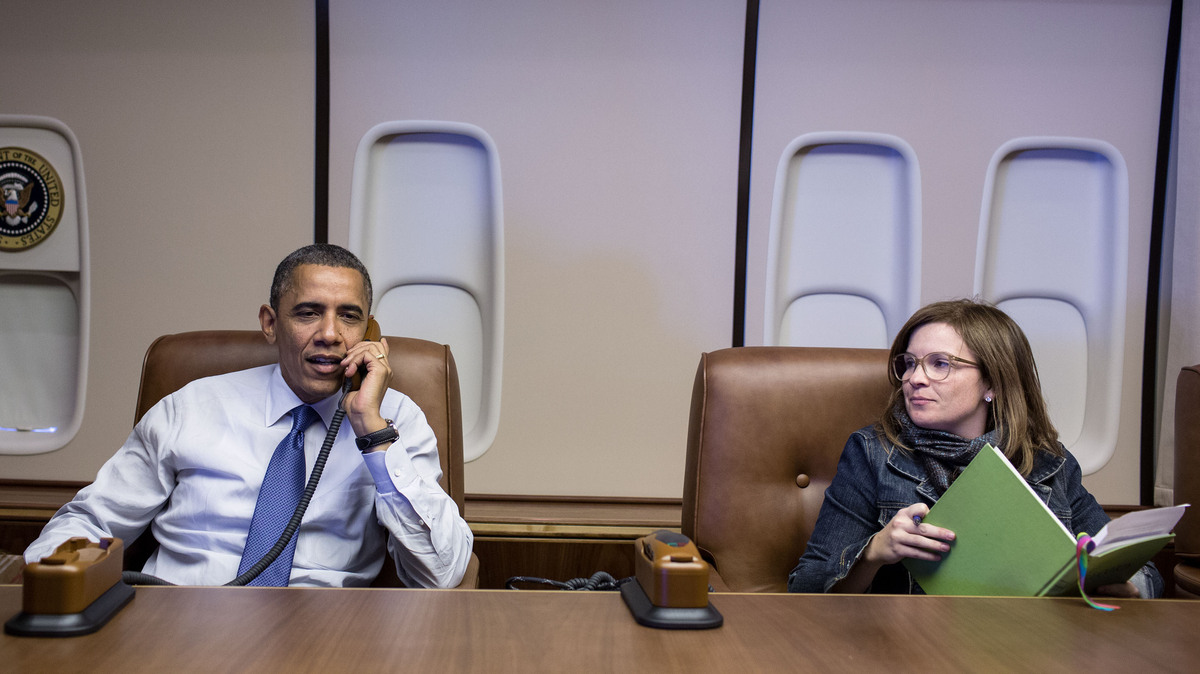 Alyssa Mastromonaco sits with President Barack Obama aboard Air Force One in 2012. Mastromonaco served as the president's director of scheduling and advance from 2009 until 2011, then became his deputy chief of staff for operations from 2011 until 2014.

Former Obama staffer Alyssa Mastromonaco is well acquainted with the privilege — and sleeplessness — of working in the White House: "I basically ran on adrenaline, almost, for six years," she says.

Mastromonaco began as President Obama's director of scheduling and advance, then became his deputy chief of staff for operations. Her responsibilities ran the gamut from overseeing the confirmation process for Cabinet secretaries to managing the president's daily schedule and foreign travel.

Mastromonaco remembers boarding Air Force One for the first time as a "humbling, awe-inspiring" experience. "There is nothing like walking off the steps of Air Force One," she says. "You always feel so proud. ... The reception, too, of other people in countries, when they see that beautiful blue and white plane, it always gives you goose bumps."

But, she adds, the presidential plane wasn't always the most comfortable way to travel — especially on overnight flights. "There aren't beds for us on Air Force One," Mastromonaco says. "We had those Snuggies that you buy on QVC and we would sleep on the floor ... and then you'd get up and everybody shares two bathrooms."

Though Mastromonaco loved her work for the president, the unrelenting pace took a toll on her. In 2014, she decided to move on. Now an executive at A&E Networks, Mastromonaco revisits her White House years in a new memoir, Who Thought This Was a Good Idea?

On being available at all hours

You always had to be available. When I became deputy chief of staff, [I] got a secure communications system that was in my bedroom, made it quite warm, because there was an actual server next to your bed and my apartment was not that big, but you could always be reached. Sometimes at 3 o'clock in the morning the red phone rings and it's the situation room and something's happened. ... I could never say I was off, ever. 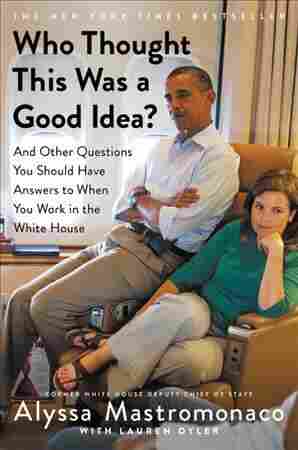 Who Thought This Was a Good Idea?

by Alyssa Mastromonaco and Lauren Oyler

Title
Who Thought This Was a Good Idea?
Subtitle
And Other Questions You Should Have Answers to When You Work in the White House
Author
Alyssa Mastromonaco and Lauren Oyler

Oddly, it was very reassuring. When you sit down with the folks who again, from administration to administration, keep this process alive and have this information, you sit down and they brief you and you're like, "Oh wow, if something happens, actually everybody does know what to do. ... I can't believe I'm seeing what would happen if a nuclear missile was launched from X and how long it would take to get here and what happens," but it is comforting to see that these processes are pretty well socialized. Everybody knows them.

On protecting the president from threats, especially with modern technology

A lot of people, of course, compared us to President Clinton and how President Clinton got out more and he did these sort of sweeping, beautiful events like at the Grand Canyon when he would sign bills, and what people didn't realize is that not only is Barack Obama the first African-American president, he was a post-9/11 president, which is a totally different beast, and also it was the first presidency that was completely within the age of social media. ...

When people talk about the uptick of threats that the Secret Service would report, so much of that was because of the advent of Facebook and Twitter. It was easier to make the threats for people to count.

So when we were first getting started, none of us wanted to ever put anyone at unnecessary risk. ... But for us, there were a lot of grand ideas that people had; one of them was having him do an event on the Triborough Bridge [in New York] and I knew that there was no way on earth that the Secret Service was going to allow that. ... It's just such a different world. Technology is so different. You can detonate a bomb with a cellphone; we know that now.

On knowing that it was time to leave her job

By about the end of 2012 I was in my office with [political strategist] David Plouffe and I was typing while I was talking to him, because I can do that, and he said, "Alyssa what are you doing?" I'm like, "What do you mean?" He's like, "None of the words on your computer screen are words." I looked and it was just gibberish, basically. I realized that I wasn't quite right, that something was off. ...

It turned out — they gave me a gross neurological exam — that I was basically functioning sort of on like 50 percent of my capacity and that I was very sleep-deprived. ... It was a sign that I was probably coming to the end of my time and that I was so lucky to have had such incredible experiences, but maybe it was time for someone with fresh legs to take over and have the same experiences that I did. ...

I prided myself on being creative and being an "idea machine," and my ideas just weren't flowing. I was becoming the person who sat at the table and when someone had an idea, I'd be the one who said, "We did that, it didn't work. We did that in 2011." It was like I had too much memory, I had been there too long, and so I decided it was time for me to go, because I wanted to leave on a high note. ... I was glad to decide on my own terms it was time to go, and it was a really nice send-off.