Accessibility links
What Trump's Taxes Would Not Show About His Finances Demonstrators are calling on the president to release his tax returns. But even if the returns were released, a tax expert says, they might not reveal much about specific sources of revenue and debts. 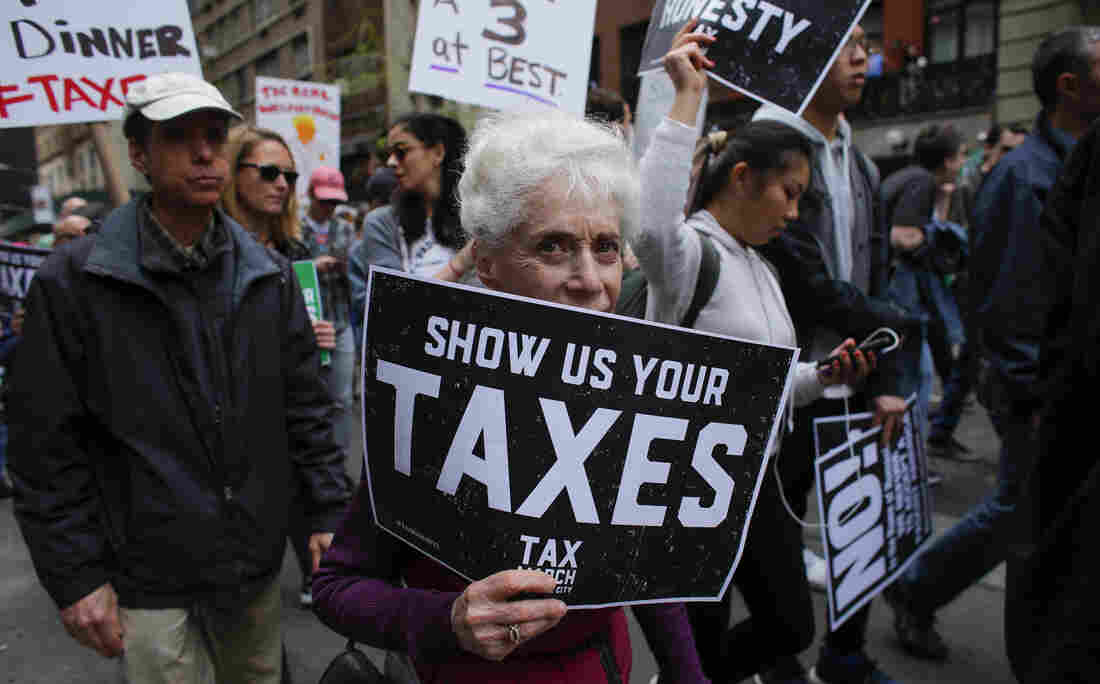 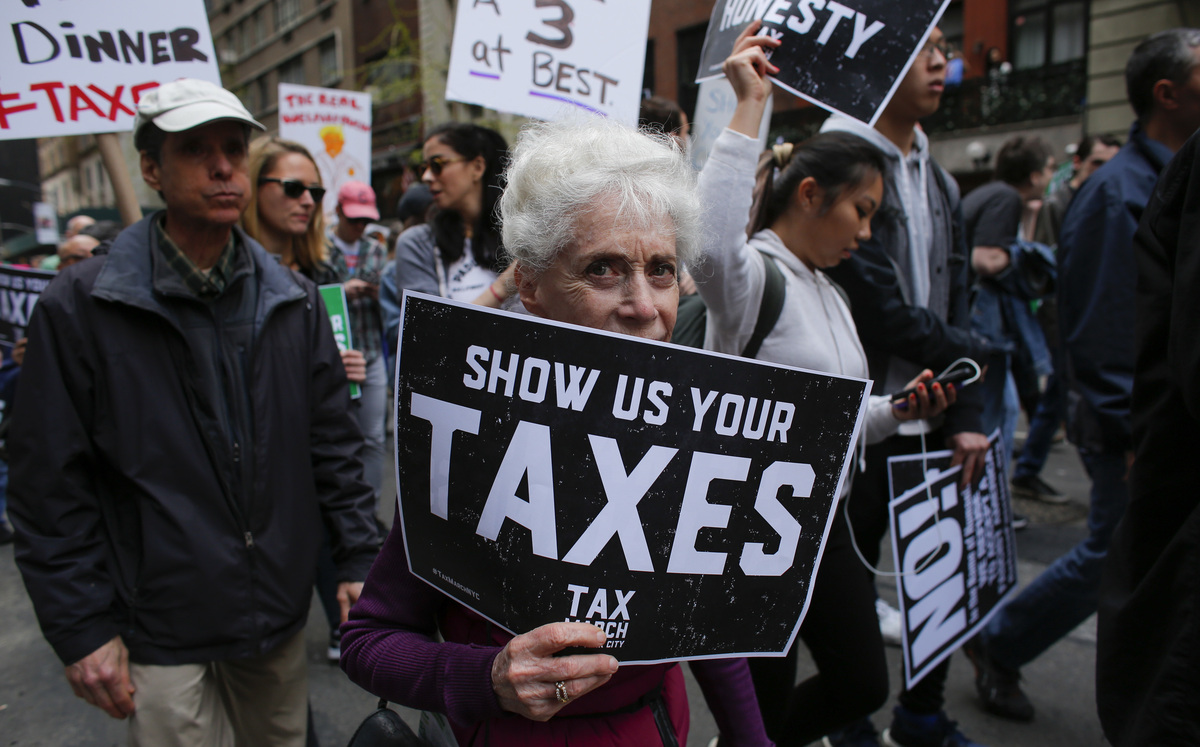 Protesters take part in the Tax March in New York on April 15 calling on President Trump to release his tax returns.

President Trump is preparing to overhaul the nation's tax code, and at least some of the coming changes could benefit his own bottom line. Critics say voters should be able to see just how much help the president might get from a revised tax code, so they are stepping up efforts to force him to share his tax returns.

Seeing the returns would reveal some key facts about the president's finances, says Noah Bookbinder, executive director of Citizens for Responsibility and Ethics in Washington, or CREW.

"What tax rate is he paying? What deductions and loopholes is he taking advantage of? How are the kinds of tax policies that he's thinking about acting on as president affecting him personally?" says Bookbinder, whose government watchdog group has sued the president, saying Trump's foreign business dealings violate the Emoluments Clause of the Constitution.

But the president's returns — due on Tuesday — might ultimately prove less revealing about Trump's finances than many of his critics suppose, says Lee Sheppard, columnist at Tax Analysts' Tax Notes.

"People have an extravagant idea about what might be on these returns," she says. "A tax return is not a financial disclosure document."

The returns can reveal how much Trump makes in a given year, but not how much he is worth, something that has been a topic of much debate.

Among other things, the returns are likely to shed little light on whom his real estate partnerships owe money to or his alleged financial ties to Russia, Sheppard says.

Trump has steadfastly refused to release his tax returns, saying his lawyers won't allow it because he is under an IRS audit. During the campaign, he promised to release the returns once the audit is finished, but he has since backtracked on that pledge.

Several states have now joined the effort to get the returns released, as NPR's Joel Rose reported:

"Trump is the first president in 40 years not to release any of his tax returns during the campaign. Now lawmakers in dozens of states have introduced bills that would force him to do so. Several of these bills go by the name Tax Returns Uniformly Made Public, or TRUMP Act."

Lawmakers Across The Country Push For Trump's Tax Returns

Lawmakers Across The Country Push For Trump's Tax Returns

But Sheppard says that as a real estate developer, Trump gets much of his income through partnerships. While he is required to reveal the name of the entity and how much money he receives from it, he doesn't have to name the other partners, whose identities may be obscured behind shell corporations and offshore subsidiaries.

He also may have sizable non-recourse debt, loans that are backed not by Trump himself but by the real estate projects his partnership is developing. Trump is required to say how much interest he pays on the debt incurred, but not how much he owes or who lent him the money, Sheppard says.

"The law is very, very, very solicitous to investors of all stripes, and they come into the partnerships through entities, so the rest of the world doesn't find out who they are," she says.

"I don't know why there's not complaints about that," she adds. "I don't know why somebody doesn't say to some senator or another, 'Well how come you're not making better laws for what gets disclosed on these [returns]?' And the reason should be rather obvious."

But CREW's Bookbinder says it's important to release Trump's returns anyway, as other presidents have been doing for decades.

"I would certainly resist saying that looking at his taxes would be the be-all and end-all, the full picture of his financial situation," he says. "There certainly are ways of hiding money that might not be picked up in tax returns, and there are lots of kind of ties that might not show up there. But there's a lot that would show up, and so it would tell us a lot more than we know now.

"And it might tell us a lot more about where else we need to look to get the full picture."