Accessibility links
Book Review: 'The Woman Who Had Two Navels,' By Nick Joaquin No matter what's happening in this new collection of work from the late Filipino writer Nick Joaquin, it's probably already too late — but that doesn't stop his characters from struggling.

A Potent, Uneasy Blend Of Passion And Fatalism In 'The Woman Who Had Two Navels'

A Potent, Uneasy Blend Of Passion And Fatalism In 'The Woman Who Had Two Navels' 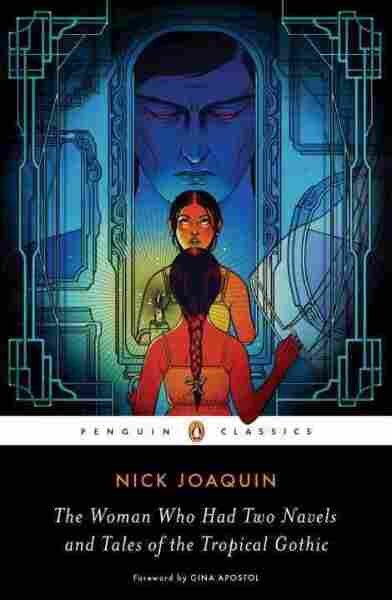 Title
The Woman Who Had Two Navels and Tales of the Tropical Gothic
Author
Nick Joaquin, Gina Apostol, et al

CANDIDA: Can we bring back those days again?

For the late, seminal Filipino writer Nick Joaquin, even the smallest interactions are microcosms of larger and irreconcilable tensions — between religion and the secular, between ideological generations, between men and women. Even his decision to write in English, the language of a country that forcibly occupied the Philippines, is a loaded one. But it provides an opportunity for Penguin Classics to make a direct presentation of some truly lyrical work. The Woman Who Had Two Navels and Tales of the Tropical Gothic collects some of Joaquin's most widely-known pieces, and the overlapping sorrows in his writing make this a standout collection in which no matter what's happening, it's probably already too late.

But a foregone conclusion is no reason not to fight, and Joaquin's stories are an uneasy, resonant blend of fatalism and passion. His most anthologized pieces, "The Summer Solstice" and "May Day Eve," are passionate dissections of gender roles, the inevitability of repeating the mistakes of the past, and the subversiveness that lurks at the heart of love. (Joaquin is a ruthless observer of human frailty, so it's no surprise the stories have been the subjects of controversies, labeled misogynist and feminist by turns.) In several stories, like "Doña Jeronima," religion is an insufficient shelter, unable to satisfy his characters' yearning for meaning but providing its own strange power.

... the overlapping sorrows in his writing make this a standout collection in which no matter what's happening, it's probably already too late.

These themes crowd together in both the titular story (in which an expat doctor gets caught up with the seemingly-sordid, increasingly tragic story of a mother and daughter chasing a musician across an ocean) and his best-known play, Portrait of the Artist as Filipino, in which three generations converge in a moldering manse in Manila as World War II closes in. It's an appropriately claustrophobic setting, as a patriarch's masterpiece self-portrait looms over characters struggling against the constraints of the past and the uncertainty of the future. As in many of Joaquin's stories, the older generation is bitterly impotent against the sea changes of the present, and the younger generations desperate to understand the world, but adrift between potential and petrification.

Joaquin's language can be beautifully dense; several stories carry sentences that meander through a full page, themes surfacing like fish. But he's no stranger to the derisive swipe, turning a sharp eye on stock figures from bourgeois society hostesses to feckless musicians. The narrator of Portrait of the Artist notes that "It's so much easier to love the proletariat from a distance;" the protagonist of "The Order of Melkizedek" (his take on hard-boiled mystery) pulls up to a derelict convent where "cargo was stored where once God had a bridal suite."

Joaquin's language can be beautifully dense; several stories carry sentences that meander through a full page, themes surfacing like fish.

That sense of abandonment — of constantly approaching a ruin — is everywhere in Joaquin's work; the political and cultural history of the Philippines makes such things hard to avoid. Each generation blames and idolizes its forebears by turns, tries to carve out its own identity amid the Spanish church or American soldiers, or tries to build nostalgia amid doomed recollections or looming futures. Characters who idealize the past usually discover the worms that always lurked in it, and those who cling to dreams of the future are routinely disillusioned. But that thread of anger galvanizes his work — injustice overwhelms and love disappoints, but anger sustains. It's likely no coincidence that in several of these stories, anger is a supernatural force.

Though Joaquin is ubiquitous in the Philippines, this is his first collection of stories in the United States, and the perfect starting point to get to know his particular brand of melancholy. The Woman Who Had Two Navels is a transporting read, and a fierce elegy for a past that never was.