Accessibility links
From 'F-Bomb' To 'Photobomb,' How The Dictionary Keeps Up With English For a new word to enter the dictionary, it must meet three criteria: widespread use, sustained use and meaningful use. Merriam-Webster lexicographer Kory Stamper explains the process in Word by Word. 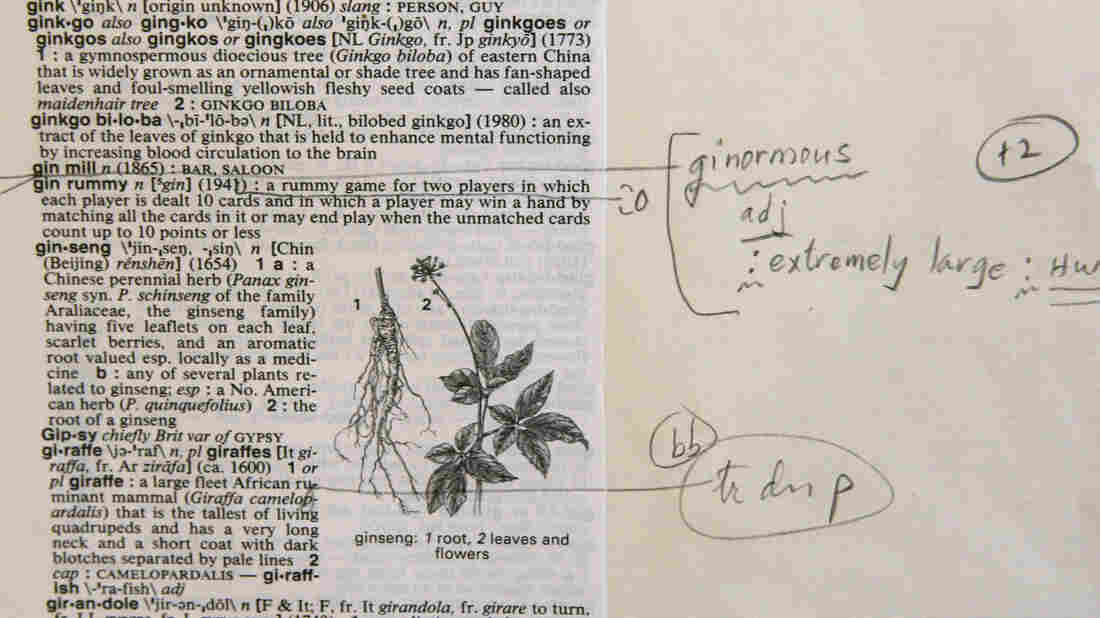 A galley proof shows some of the work that went into adding "ginormous" to Merriam-Webster's 2007 collegiate dictionary. Charles Krupa/AP hide caption 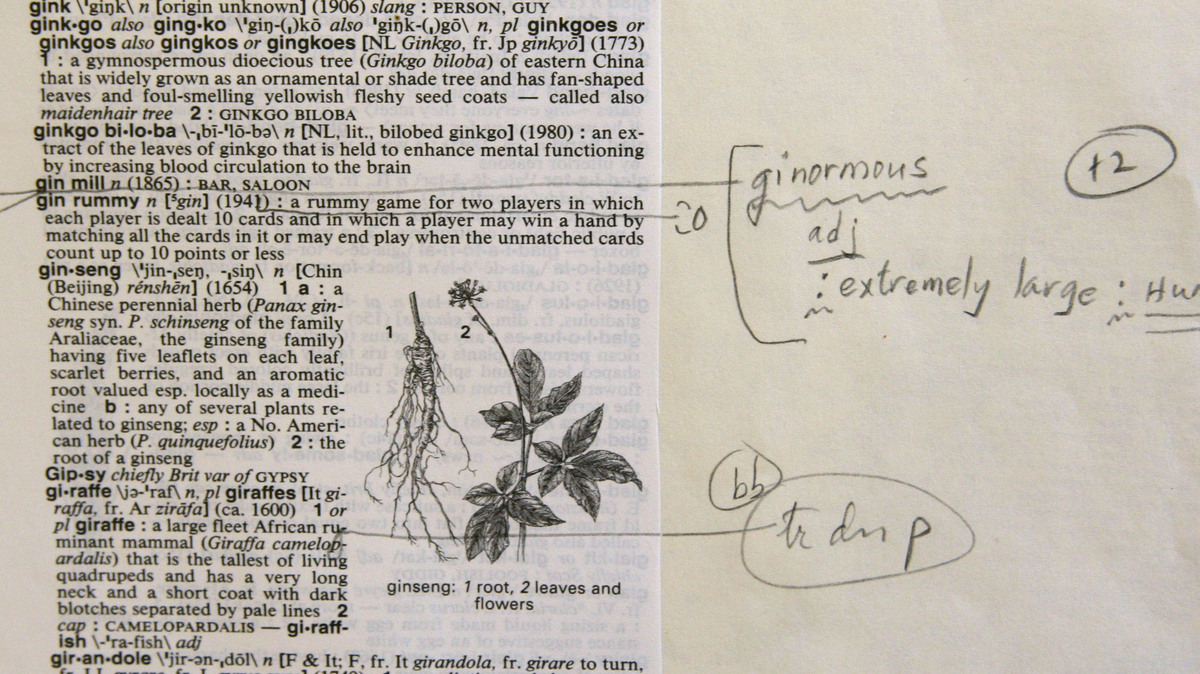 A galley proof shows some of the work that went into adding "ginormous" to Merriam-Webster's 2007 collegiate dictionary.

In 2017 alone, Merriam-Webster added more than 1,000 words to its dictionary. Noah Webster himself might have struggled to define these new English terms — such as binge-watch, humblebrag, photobomb, NSFW, truther, face-palm and listicle.

But language is a "living thing," says lexicographer Kory Stamper, an associate editor at Merriam-Webster — and it's constantly shifting in use and meaning.

"A lot of times people assume that English as we speak it is something that was curated maybe by some dudes in frilly shirts back in the 1700s," Stamper explains. "But in fact, a language is ... always influenced by the people who come in and speak it or come in and conquer it."

Stamper's new book, Word by Word, describes the painstaking process of keeping the dictionary up to date. Five years ago, for instance, Merriam-Webster added the term f-bomb to its pages — an addition that reflected, Stamper says, the term's widespread, sustained and meaningful use in society.

"People assume that ... there's boundaries set around [the English language], and that all the good stuff is on the inside and everything on the outside is bad or not worth using," she says. "But it's all worth using, and all of it is required to make the language flourish."

On the criteria for adding a word to the dictionary

From Seussian To Snollygoster, Merriam-Webster Adds Over 1,000 New Words

[The] second is sustained use. So a word needs to actually have kind of a long shelf life, because most words come into the language and either don't have much written use for a long time, or they have a lot of written use and then they drop out [of] use for 10 or 20 years. So we like to see some sustained usage, to make sure that it's sort of settled into the language.

Then the third criterion is meaningful use, which means the word has to have a meaning, which sounds patently ridiculous, but there are a handful of words that show up in print that just don't have a lexical meaning. 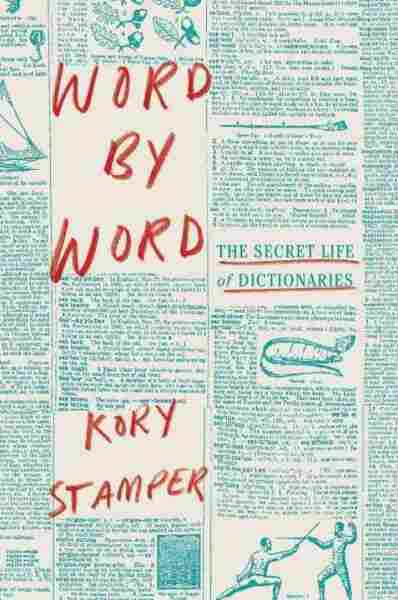 The Secret Life of Dictionaries

On how context really helps

Sometimes you need to show a word as it's used in the wild, and if you can find a really good citation that does that, it's helpful, because the way that we learn language is through context. Language isn't in these little discreet boxes like we present it in the dictionary. You don't have a word that just exists on its own with no context around it. So context is always really important. The more context you can give someone, the better.

On tracking down a word's first-known written use

It's kind of a wild lexical goose chase. So one of the things that we do is we will find first dates of written use first by going through our own in-house citation database, and sometimes we have that citation there. Other times what we have to do is ... start scouring other kinds of databases for the use, and honestly now that things are online it's so much easier to do.

So you can go to a big database like LexisNexis and do a search for "f-bomb" that's targeted between certain dates. Sometimes ... someone has mailed us a citation. ... "F-bomb" was first used [about] Gary Carter, who was a baseball player who was not known for swearing, but who [said the word "f***"] once and that made enough news that they needed a way to say what word he used and so they came up with "f-bomb." So finding these citations of first written use is really kind of [a] needle in a haystack.

This is a word that people have written books about; this is a word that you could do a book-length treatment of. ... It's not just fraught for lexicographers; it's fraught for everybody. There are debates within the African-American community about whether the word should be used or not. There are debates among people outside of the African-American community about whether this should be used or not. ...

This all gets down to intention and being in the middle of some of the most painful interactions that people have lexically. ... We tend to be very introverted and shy people and we tend not to like being in the middle of any interaction if we can help it. But this interaction in particular ... wherein a word is used to either dehumanize or rehumanize somebody ... when you're tracking the word you also have to take into account everything that goes underneath of that. It's almost impossible to put that in writing.

Read an excerpt of Word by Word