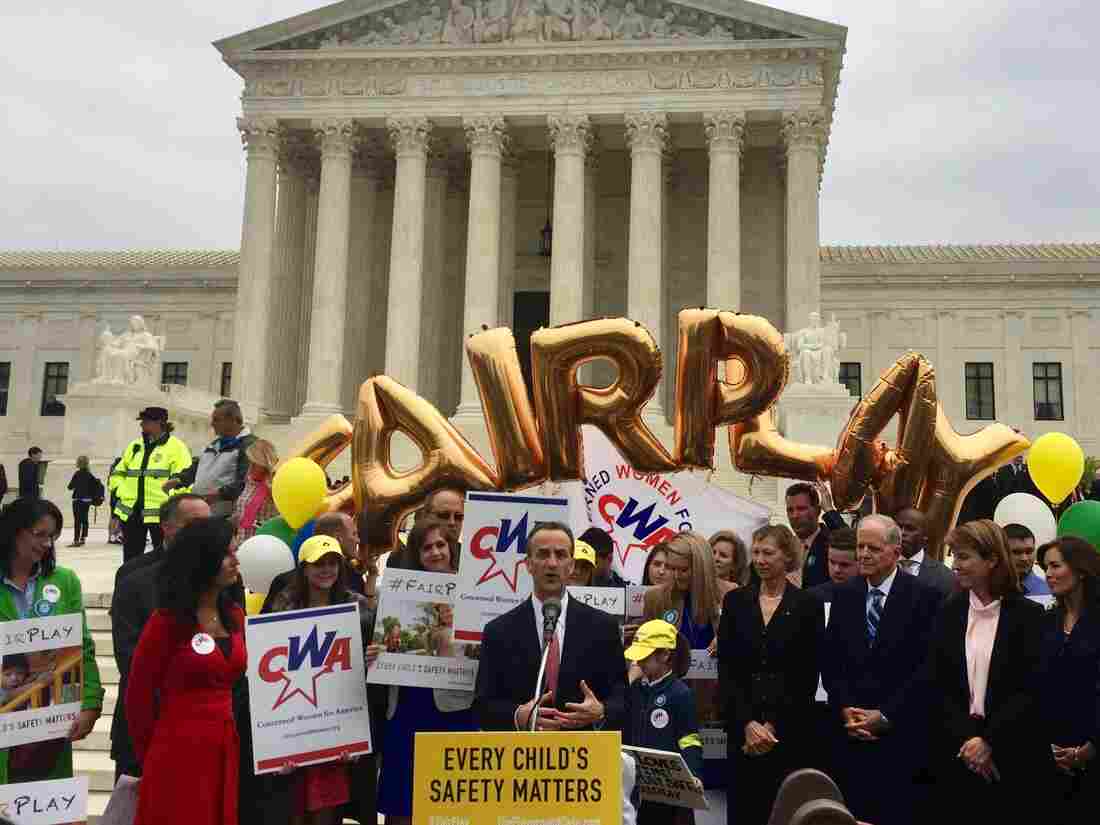 David Cortman of the Alliance Defending Freedom speaks after representing Trinity Lutheran Church before the Supreme Court on Wednesday. Concerned Women for America hosted a rally in support of the Missouri church on the court steps. Lauren Russell/NPR hide caption 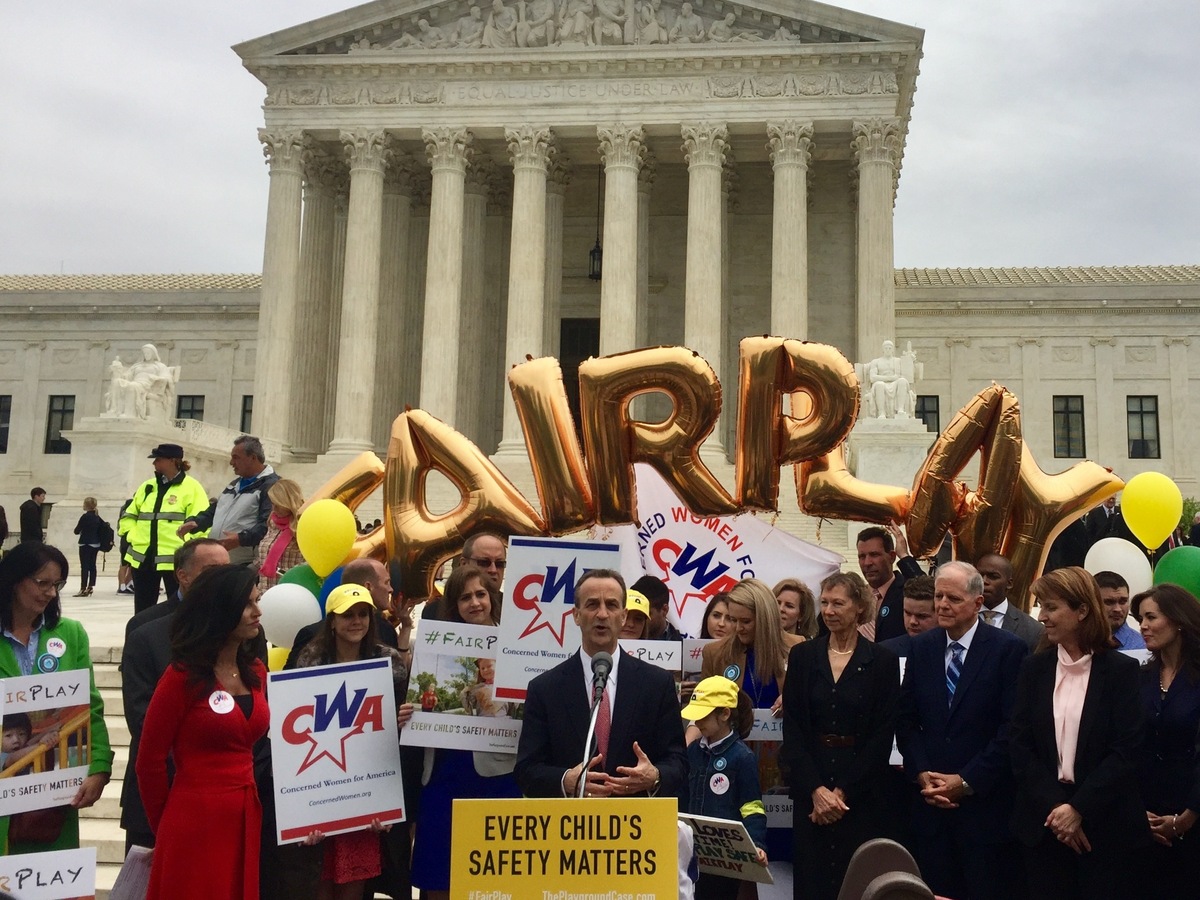 David Cortman of the Alliance Defending Freedom speaks after representing Trinity Lutheran Church before the Supreme Court on Wednesday. Concerned Women for America hosted a rally in support of the Missouri church on the court steps.

A clear majority of justices at the U.S. Supreme Court seemed troubled Wednesday by a Missouri grant program that bars state money from going to religious schools for playground improvement.

Thirty-nine states have state constitutional provisions that bar taxpayer funds from going to religious schools — provisions that have been a major obstacle for the school choice movement. The Missouri case is an attempt to lower that wall separating church and state.

The Trinity Lutheran Church in Columbia, Mo., owns and operates a preschool learning center. It applied for a state grant to rubberize its playground surface, using old and discarded tires.

But because the school's mission is avowedly religious, the state turned down the application, citing language in the state Constitution that explicitly bars state funds from going directly or indirectly to any religious sect or denomination.

The church challenged the denial in court, appealing all the way to the Supreme Court.

"Safety shouldn't hinge on whether a child is religious, or if they are playing on a playground at a religious school, or a secular, or a public institution," school Director Annette Kiehne said on the steps of the high court on Wednesday.

But James Layton, representing the state of Missouri, countered that the Supreme Court has never required states to provide direct government grants to churches.

"Almost 200 years ago, the people of the state of Missouri, adopting language" used by the Founding Fathers, "decided that we were not going to tax people in order to give money to churches," he said.

Inside the courtroom, even some of the court's liberals signaled that they are concerned by the grant denial. But neither side had an easy time of it.

Layton, arguing for the state, clearly had the harder task, struggling as justices pressed him about where to draw the line between those things that a church is clearly entitled to, like public safety protections, versus state aid for facilities and programs at church schools.

Those are legitimate objectives for the state in avoiding an unconstitutional entanglement with religion, Layton argued. Providing police and fire protection is different, he said, because the state is not "taking money from the state treasury and giving it to the church."

Justice Samuel Alito pressed the point, noting that there are federal programs that give grants to reinforce security at synagogues, mosques and churches that are at risk of terrorist attacks.

Justice Stephen Breyer wondered why it is that a religious school is entitled to police and fire protection, but may be denied money to make its playground safer. "What's the difference?" he asked.

Justice Elena Kagan noted there is a strong constitutional principle that says when we have a program like this one, "as long as you're using the money for playground services, you're not disentitled from that program because you're a religious institution doing religious things."

Under that theory, replied lawyer Layton, wouldn't the state have to "put new paint on the sanctuary if the old one had lead paint?" Or might the state be required "to reimburse for pews to be upholstered?"

In this case, he added, not everyone gets a grant. Only a few schools were selected for the tire scrap program.

Arguing on behalf of the church, lawyer David Cortman of the Alliance Defending Freedom had an easier task, mainly because he took the view that as long as the program being funded is secular and open to everyone else, religious schools can't be excluded.

Justice Anthony Kennedy, eyebrows raised, seemed doubtful. Are you saying that "religious status can never be the basis for a governmental action or governmental ... statute?"

I can't think of any, Cortman answered. "Why would someone's religious status matter in the first place?"

The Mile High Promise, And Risk, Of School Choice

Justice Ruth Bader Ginsburg balked at that assertion, noting that the Supreme Court said long ago "in no uncertain terms that what the Framers didn't want was tax money ... to pay for building or maintaining churches or church property." Pointing to a landmark 1947 church-state case, she asked, "Doesn't that fit this case?"

When Cortman argued that playgrounds are not religious in nature, Justice Sonia Sotomayor said suppose the playground is used for religious activities. Suppose there is prayer before play, for instance.

And what if the school only admitted its own religious followers, asked Justice Ginsburg. Suppose it excluded non-Lutherans or non-Christians. Would the school still be entitled to a playground resurfacing grant?

Yes, replied Cortman, because the school has "a free exercise right to religious autonomy, to decide who their members are."

Justice Sotomayor noted that for more than a century most states, like Missouri, have barred money for religious institutions. Aren't states "free to say we don't want to spend money from the public fisc on houses of worship?" she asked.

Cortman replied that such provisions amount to "government coercion when ... the only way you could receive a public benefit is if you do not exercise your religion." That, he said, is a violation of the U.S. Constitution's right to the free exercise of religion.

At the end of the day, the quest for the Supreme Court may be how narrowly or broadly it writes its opinion. As Justice Kagan put it, the church-state divide is a "fraught issue" in which "states have their own very long-standing law" and "nobody is completely sure they have it right."

In view of that, Kagan said, "I guess there's something attractive about having some play in the joints where states can make their own choices."

Just how much play is the question.