Accessibility links
'Jeremiah Tower': A Reclusive Celebrity Chef, Under Glass This unexceptional documentary about an exceptional chef — the chief innovator of California cuisine — dutifully traces his rise and self-imposed exile, but leaves the viewer hungry. 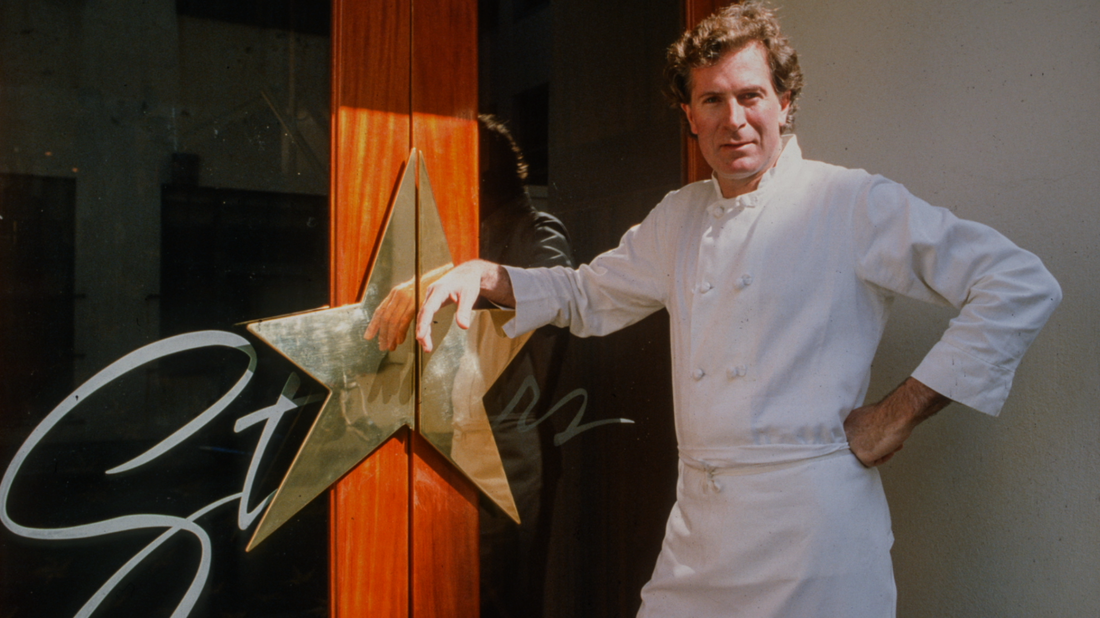 The irascible chef poses in front of his San Francisco restaurant in the documentary Jeremiah Tower: The Last Magnificent. The Orchard hide caption The irascible chef poses in front of his San Francisco restaurant in the documentary Jeremiah Tower: The Last Magnificent.

There are no sure things in the volatile world of indie film distribution, but food documentaries have become reliable winners — the amuse-bouche of dinner-and-a-movie date nights, the pornography of Netflix. Half of them warn of all the terrible things in food—genetically modified organisms! high-fructose corn syrup! massive amounts of sugar!—but the other half are sensual delights like Jiro Dreams of Sushi or El Bulli: Cooking in Progress, advancing the culinary whimsy of the world's most innovative kitchens. In this, the age of the celebrity chef, documentaries have become a form of canonization, even though not all chefs (or food-doc profiles) are on equal footing.

The middling documentary Jeremiah Tower: The Last Magnificent makes the case for the reclusive and irascible chef as the chief innovator of California cuisine, a distinctly American answer to the sophistication and depth of its European counterparts. Introduced walking alone through Mexican ruins as his self-parodic philosophical musings are piped onto the soundtrack — think Walk Hard: The Dewey Cox Story for food — Tower is presented as a mystery the film seeks to solve, though the answers are firmly baked into the proverbial pie. Director Lydia Tenaglia just heats and serves.

Still, Tower was and is an extraordinarily complex and fascinating figure, with a sophisticated air that can alternately be seen as supremely arrogant or righteously iconoclastic. Through an awkward blend of interview footage and thinly rendered re-creations, Tenaglia starts with memories of Tower's lonely, privileged childhood, when his rich parents would leave him to eat his way through the First Class service on ships like the Queen Mary. From an early age, he developed a passion for haute cuisine, collecting old menus and ancient cookbooks, and eventually helping out in the kitchen.

During his time pursuing a degree in architecture at Harvard, Tower would show off his skills with legendary soirees, but in the early '70s, there were few avenues for American chefs to make a name for themselves. All that changed when Tower found himself working alongside Alice Waters in her famed Berkeley restaurant Chez Panisse, where the two innovated California cuisine by elevating local ingredients with sophisticated technique. The two would eventually part company, which allowed Tower to distinguish himself by opening Stars, a San Francisco eatery that evoked the majestic ships of his childhood.

Though Stars (and various offshoots) thrived from the mid-'80s through much of the '90s, the restaurant closed suddenly in 1999 and a disillusioned Tower left the business, leaving no breadcrumbs behind for even his closest friends to follow. With its gallery of well-known talking heads — including admirers like Anthony Bourdain, Mario Batali, and Martha Stewart, and those who worked in closer proximity to him — The Last Magnificent guesses at the loneliness that's engulfed Tower's life, sourced to his neglectful parents and a sexuality he had to keep hidden.

All this speculation is credible and absorbing, but the film offers a glimpse of what it might have been when Tower resurfaces as executive chef at Tavern on the Green, a New York City institution that's long been a popular whipping post for food critics. What would lead Tower, a man associated with California cuisine, to take up the quixotic mission of reviving a New York restaurant that may be beyond salvation?

Now that's great drama — not to mention the one opportunity to get original footage of Tower in action — but The Last Magnificent relegates it to one chapter in a much larger book. Tenaglia is so committed to making an argument for Tower's place in the culinary firmament that she underserves the part of his life that could have made the documentary unique. As is, it feels like a blown-out induction video for a Hall of Fame that doesn't exist.