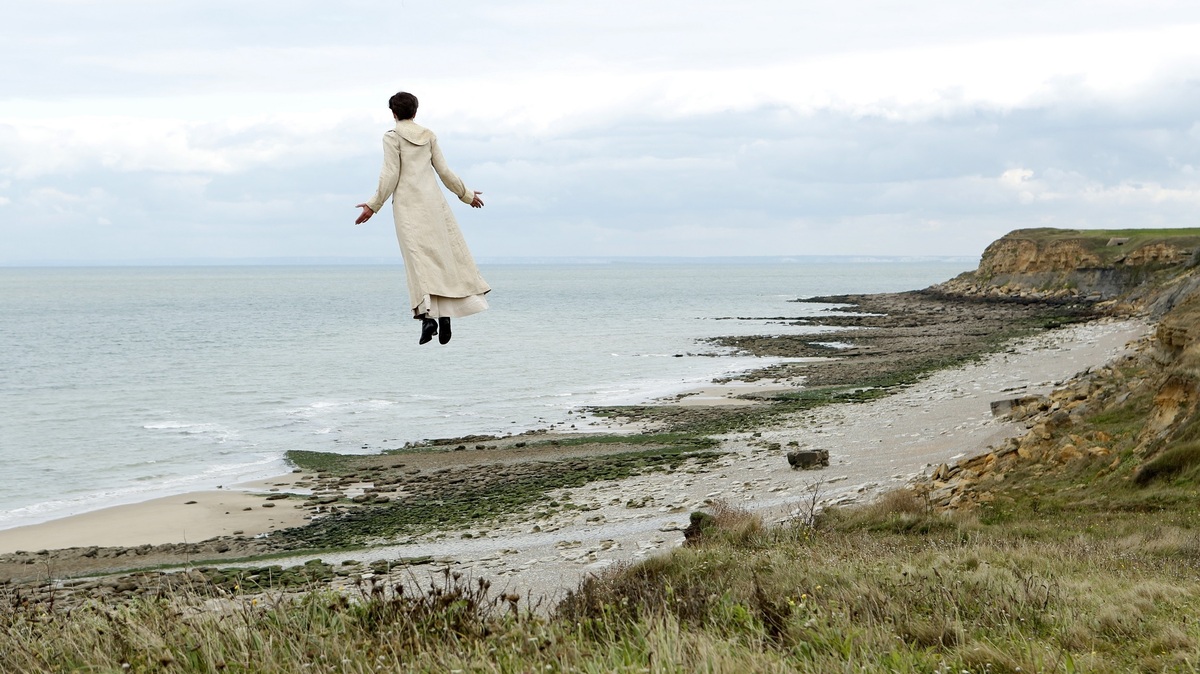 Isabelle (Valeria Bruni Tedeschi) takes in (and takes to) the sea air in Slack Bay.

Everything is a little off in the small French seaside town of Slack Bay — even gravity. Bruno Dumont's period farce is punctuated by frequent pratfalls, and some of his characters can barely stand upright. Yet toward the movie's end, several of them become lighter than air, and threaten to float away.

If they were to vanish, they'd be part of a trend. Set in a class-stratified 1910, Slack Bay is nominally about a police investigation of missing vacationers. Ungainly detectives Machin and Malfoy (Didier Despres and Cyril Rigaux), intentionally reminiscent of Laurel and Hardy, wander the beaches in search of clues. Dunes are a particular problem for the rotund Machin, who tends to roll down them like a sideways bowling pin.

The cops don't solve the mystery of the disappearances until the final moments, but Dumont snitches to the viewer just 20 minutes into the leisurely two-hour tale: The visitors have been nabbed by the proletarian Brufort clan, who kill and eat them. Having salted the scenario with cannibalism, the writer-director can hardly avoid eventually peppering it with incest.

Like Dumont's previous effort, Li'l Quinquin, Slack Bay is an oceanfront parody of a police procedural, named in French after its main character. The original title, Ma Loute ("My Lout"), refers to the oldest Brufort son, who has gnarly teeth and ears that protrude as far from the side of his head as his nose does from the front. His physiognomy, like much of the movie, seems designed for silent cinema.

Ma Loute (Brandon Lavieville) soon has an aristocratic girlfriend, or boyfriend. Billie Van Peteghem (Raph), who switches frequently between dresses and suits, is as pretty as Ma Loute is homely. Billie's mother calls her child a boy, but Billie says she's "a girl in disguise."

Lavieville, the pseudonymous Raph, and several others are nonprofessionals Dumont recruited in the Pas de Calais region, his home turf both personally and cinematically. (As usual, the director emphasizes local dialects, whose oddities can't really be conveyed by subtitles.) The elder Van Peteghems, however, are played by well-known performers.

Juliette Binoche is Aude, Billie's histrionic mom; Fabrice Luchini is Andre, her daffy and lurchingly humpbacked uncle; and Valeria Bruni Tedeschi is Isabelle, who tumbles almost as often as Machin. They are all swooning aesthetes, regularly overwhelmed by the beauty of a world the locals see merely as a source of sustenance.

While the murderous Bruforts have a certain dignity, the Van Peteghems range from ridiculous to certifiable. Even their hulking vacation home, done "in the Ptolemaic style," is absurd. Clearly, Dumont encouraged the troupe that impersonates this crew to play to the topmost seats. This may not be Luchini's broadest performance, but it certainly is Binoche's. Her Aude is operatic when happy and even more delirious while in the grips of the Christian piety that seems to have unhinged several members of the family.

While most of the story's ingredients denote farce, the director takes the events at the same deliberate pace he used with such bleak earlier films as Humanite[acute]. Long takes, washed-out colors, distant camera placement and widescreen compositions detach the viewer from the madcap action, and thus discourage laughs.

Dumont is a former philosophy student, which may explain why Slack Bay is a comedy primarily in theory. More intriguing than involving, the movie uses the conventions of slapstick to undermine the rich as well as the poor. That both are so rickety suggests the filmmaker's target is not French society but all of humanite[acute].